by
Bill Mitchell
My articles My siteMy booksAbout me
Follow on:Twitter
Summary:
It’s Wednesday and I usually don’t write much on my blog. But today, history was made and so I thought I should at least cover it. Today (November 18, 2020), the Australian Bureau of Statistics (ABS) released the latest- Wage Price Index, Australia – (September-quarter 2020). The ABS reported that while “the September quarter is generally a quarter of solid wage growth … the impact of the COVID-19 pandemic contributed to a subdued rate of wage growth in the September quarter 2020”. However, they might also have said that today’s result was “the lowest quarterly growth in the 22-year history of the WPI”. Private sector grow was just 0.1 per cent and public sector growth was just 0.2 per cent. The overall WPI growth was just 0.1 per cent. With the quarterly inflation in the September-quarter


Bill Mitchell writes Governments should be working for everyone, not just the fortunate few

Bill Mitchell writes Why improve policy when a government can pillory a low-paid, precarious worker instead

Bill Mitchell writes ABCD, social capital and all the rest of the neoliberal narratives to undermine progress

Podcast – What is modern monetary theory and could it fix Australia’s problems?

It’s Wednesday and I usually don’t write much on my blog. But today, history was made and so I thought I should at least cover it. Today (November 18, 2020), the Australian Bureau of Statistics (ABS) released the latest- Wage Price Index, Australia – (September-quarter 2020). The ABS reported that while “the September quarter is generally a quarter of solid wage growth … the impact of the COVID-19 pandemic contributed to a subdued rate of wage growth in the September quarter 2020”. However, they might also have said that today’s result was “the lowest quarterly growth in the 22-year history of the WPI”. Private sector grow was just 0.1 per cent and public sector growth was just 0.2 per cent. The overall WPI growth was just 0.1 per cent. With the quarterly inflation in the September-quarter was recorded at 0.693 per cent, real wages thus fell for Australian workers. Further, over the longer period, real wages growth is still running well behind the growth in GDP per hour (productivity), which has allowed profits to secure a substantially increased share of national income.

The summary results (seasonally adjusted) for the September-quarter 2020 were:

The ABS Media Release – said that:

The inflation measures, which the Reserve Bank of Australia uses when assessing underlying movements, for the September-quarter were:

Which means that irrespective of the inflation measure used, real wages were cut in the September-quarter for both public and private employees.

The wage series used in this blog post is the quarterly ABS Wage Price Index. The Non-farm GDP per hour is derived from the quarterly National Accounts.

– the term is more self-explanatory; and

– the measure does not attribute change in GDP to specific factors of production.

On price inflation measures, please read my blog – Inflation benign in Australia with plenty of scope for fiscal expansion – for more discussion on the various measures of inflation that the RBA uses – CPI, weighted median and the trimmed mean The latter two aim to strip volatility out of the raw CPI series and give a better measure of underlying inflation.

The September-quarter result is an outlier – given the temporary government decision to offer free child care (now rescinded).

The latest quarter shows a dramatic decline in real wages. 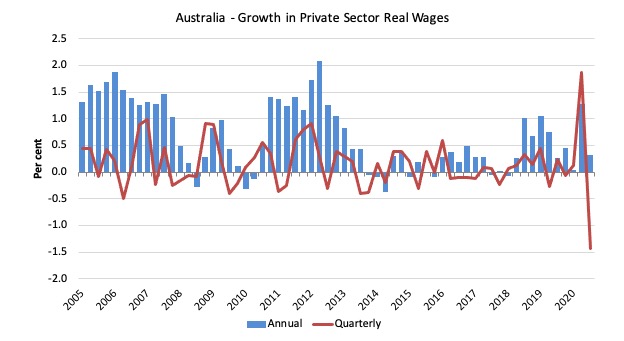 I also superimposed the RBA’s core annual inflation rate (red line). The blue bar area above the red line indicate real wages growth and below the opposite. 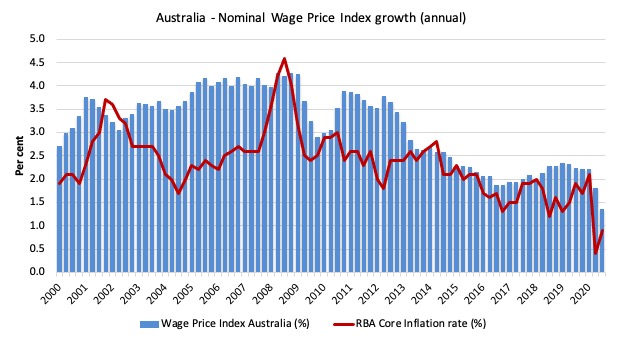 The aggregate data shown above hides quite a significant disparity in quarterly wage movements at the sectoral level, which are depicted in the next graph. 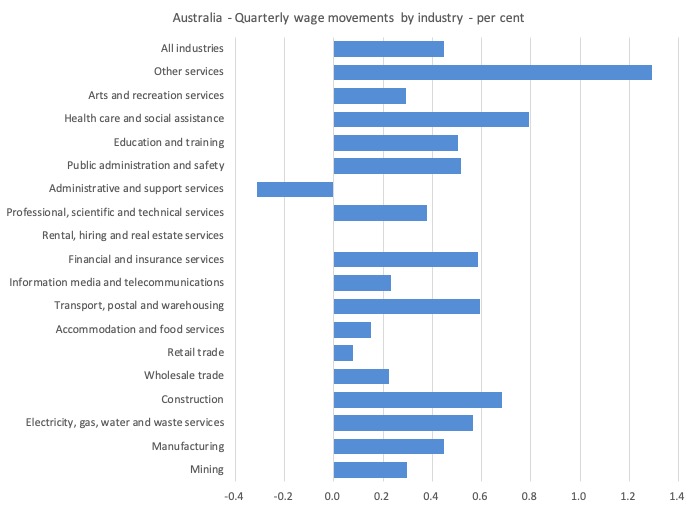 The ABS also reported that:

While nominal wages growth was mostly positive, albeit modest, the next graph shows the movements in real wages and you can see that workers in all occupational groups lost purchasing power in the September-quarter. 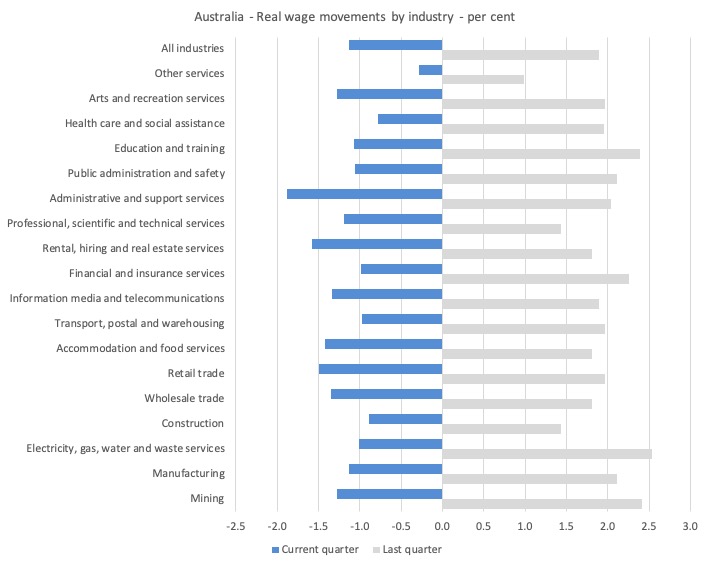 Workers not sharing in productivity growth

Real wages growth means that the rate of growth in nominal wages is outstripping the inflation rate, another relationship that is important is the relative growth of real wages and productivity.

Historically (for periods which data is available), rising productivity growth was shared out to workers in the form of improvements in real living standards.

There is also an equity construct that is important – if real wages are keeping pace with productivity growth then the share of wages in national income remains constant.

Further, higher rates of spending driven by the real wages growth then spawned new activity and jobs, which absorbed the workers lost to the productivity growth elsewhere in the economy.

Taking a longer view, the following graph shows the total hourly rates of pay in the private sector in real terms (deflated with the CPI) (blue line) from the inception of the Wage Price Index (December-quarter 1997) and the real GDP per hour worked (from the national accounts) (green line) to the September-quarter 2020.

It doesn’t make much difference which deflator is used to adjust the nominal hourly WPI series. Nor does it matter much if we used the national accounts measure of wages.

So not only did real wages decline in the September-quarter, the growth in productivity widened the gap between the two series even further.

If I started the index in the early 1980s, when the gap between the two really started to open up, the gap would be much greater. Data discontinuities however prevent a concise graph of this type being provided at this stage.

For more analysis of why the gap represents a shift in national income shares and why it matters, please read the blog post – Australia – stagnant wages growth continues (August 17, 2016).

Where does the real income that the workers lose by being unable to gain real wages growth in line with productivity growth go? 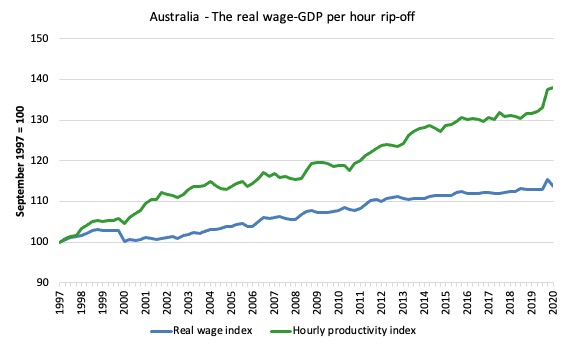 One might then claim that investment will be stimulated.

At the onset of the GFC (September-quarter 2008), the peak Investment ratio (percentage of private investment in productive capital to GDP) was 23.3 per cent.

It peaked at 24.3 per cent in the September-quarter 2013. But in recent quarters it has steadily fallen and in the June-quarter 2020 (most recent data) it stood at 17.9 per cent.

Some of the redistributed national income has gone into paying the massive and obscene executive salaries that we occasionally get wind of.

Some will be retained by firms and invested in financial markets fuelling the speculative bubbles around the world.

Now, if you think the analysis is skewed because I used GDP per hour worked (a very clean measure from the national accounts), which is not exactly the same measure as labour productivity, then consider the next graph.

The only way that the wage share can fall like this, systematically, over time, is if there has been a redistribution of national income away from labour.

I considered these questions in a more detailed way in this blog post series:

A massive redistribution of income towards profits has occurred. 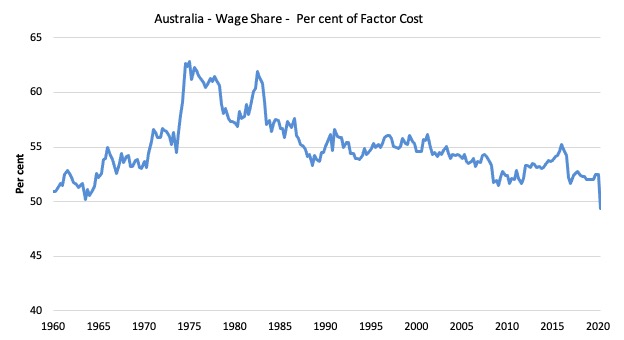 The relationship between real wages and productivity growth also has bearing on the balance sheets of households.

One of the salient features of the neo-liberal era has been the on-going redistribution of national income to profits away from wages. This feature is present in many nations.

The suppression of real wages growth has been a deliberate strategy of business firms, exploiting the entrenched unemployment and rising underemployment over the last two or three decades.

The aspirations of capital have been aided and abetted by a sequence of ‘pro-business’ governments who have introduced harsh industrial relations legislation to reduce the trade unions’ ability to achieve wage gains for their members. The casualisation of the labour market has also contributed to the suppression.

The so-called ‘free trade’ agreements have also contributed to this trend.

I consider the implications of that dynamic in this blog post – The origins of the economic crisis (February 16, 2009).

As you will see, I argue that without fundamental change in the way governments approach wage determination, the world economies will remain prone to crises.

In summary, the substantial redistribution of national income towards capital over the last 30 years has undermined the capacity of households to maintain consumption growth without recourse to debt.

One of the reasons that household debt levels are now at record levels is that real wages have lagged behind productivity growth and households have resorted to increased credit to maintain their consumption levels, a trend exacerbated by the financial deregulation and lax oversight of the financial sector.

The standard mainstream argument is that unemployment is a result of excessive real wages and moderating real wages should drive stronger employment growth.

As Keynes and many others have shown – wages have two aspects:

First, they add to unit costs, although by how much is moot, given that there is strong evidence that higher wages motivate higher productivity, which offsets the impact of the wage rises on unit costs.

Second, they add to income and consumption expenditure is directly related to the income that workers receive.

So it is not obvious that higher real wages undermine total spending in the economy. Employment growth is a direct function of spending and cutting real wages will only increase employment if you can argue (and show) that it increases spending and reduces the desire to save.

There is no evidence to suggest that would be the case.

The following graph shows the annual growth in real wages (horizontal axis) and the quarterly change in total employment (vertical axis). The period is from the December-quarter 1998 to the September-quarter 2020. The solid line is a simple linear regression.

Conclusion: When real wages grow faster so does employment although from a two-dimensional graph causality is impossible to determine.

Noting that we should not draw causality from two-dimensional cross plots. 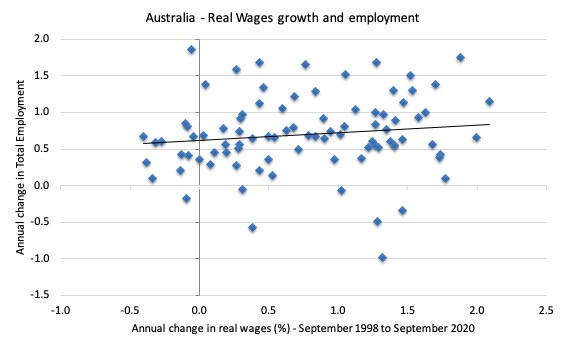 But, given the quarterly inflation in the September-quarter recorded 0.693 per cent, real wages thus fell for Australian workers.

Further, over the longer period, real wages growth is still running well behind the growth in GDP per hour (productivity), which has allowed profits to secure a substantially increased share of national income.

Bill Mitchell is a Professor in Economics and Director of the Centre of Full Employment and Equity (CofFEE), at the University of Newcastle, NSW, Australia. He is also a professional musician and plays guitar with the Melbourne Reggae-Dub band – Pressure Drop. The band was popular around the live music scene in Melbourne in the late 1970s and early 1980s. The band reformed in late 2010.
My articlesMy siteMy booksAbout me
Follow on:Twitter
Previous Governments will always let inflation accelerate – apparently
Next Australian labour market improving as Victoria eases its strict lockdown