by
Bill Mitchell
My articles My siteMy booksAbout me
Follow on:Twitter
Summary:
Japan has a new leader of the ruling Liberal Democratic Party, who, given the majority of the LDP in the Diet will become prime minister in the coming days. He was interviewed over the weekend about the current crisis and the role that the Japanese government can play to attenuate the costs. He stated clearly that there was no limit to government debt issuance. The meaning of this statement is clear. The Japanese government should ignore claims that its public debt ratio is too high or is facing impending insolvency or bond-market revolts or any of the other manic predictions that economists who do not know better keep making. Instead, as Yoshihide Suga noted, the challenge is jobs and incomes. The only limits are real resource constraints and when there is a pandemic and rising

Lars Pålsson Syll writes Public debt — how much is too much?

Japan has a new leader of the ruling Liberal Democratic Party, who, given the majority of the LDP in the Diet will become prime minister in the coming days. He was interviewed over the weekend about the current crisis and the role that the Japanese government can play to attenuate the costs. He stated clearly that there was no limit to government debt issuance. The meaning of this statement is clear. The Japanese government should ignore claims that its public debt ratio is too high or is facing impending insolvency or bond-market revolts or any of the other manic predictions that economists who do not know better keep making. Instead, as Yoshihide Suga noted, the challenge is jobs and incomes. The only limits are real resource constraints and when there is a pandemic and rising unemployment, those constraints ease and the fiscal space for more net spending increases. At least one world leader understands that.

As an aside, I was notified last week that I have been awarded a fellowship from the – Japan Society for the Promotion of Science (JSPS) – which is “Japan’s premier research funding agency” to promote “collaborative research between excellent researchers in Japanese universities and institutes and their overseas colleagues”.

I was very happy to receive this award and it will allow me to work in Japan for two months next year (from February).

I have my fingers crossed that the Australian government ban on international travel will have been lifted by then and that it is safe to take up the residency in Kyoto.

I thank Satoshi Fujii and his team for their support and work in helping to make this fellowship a reality.

As Chief Cabinet Secretary, Yoshihide Suga was a strong supporter of the Bank of Japan’s bond-buying policies.

On January 29, 2016, the Japan Times carried an article – Government applauds BOJ’s ‘bold’ step into negative territory – which noted that Yoshihide Suga “appreciates the introduction of a bold method tho achieve its price stabilization goal”.

This was after the Bank of Japan had cut its policy interest rate to below zero.

In his interview last Sunday, Mr Suga told the audience:

Only when we have economic growth can we push through fiscal reform. What’s most important is to create jobs and protect businesses.

Which is the appropriate priority ranking.

A government should never withdraw a fiscal stimulus until the economy is recovering and non-government spending is able to take up the slack.

Too often governments freak out about the size of their fiscal positions and cut their net spending prematurely. We saw that in Australia in 2012, which really paved the way for the sub-trend growth that the economy exhibited as it entered the pandemic.

And in a few weeks the Australian (penny-pinching) government will cut the special unemployment benefits supplement it introduced at the beginning of the pandemic.

It has been estimated that returning to the old payment level (which was well below the poverty line) will result in a loss of GDP of around 1 per cent ($A31.3 billion over two years) and a loss of 145,000 jobs (Source).

Madness is not the worst thing about this. Must worse – their decision is delinquent.

Mr Suga is a conservative but light years ahead of understanding the capacities of the government and its central bank than our government.

He was asked whether there was a “limit on bond issuance” (Source), he replied:

I don’t think so … What’s important now is to improve current (economic) conditions … Japan’s GDP suffered its biggest postwar contraction in the second quarter, so we need to do whatever it takes to support growth. We have reserves set aside, so we can of course tap that. But if additional steps are necessary, we would act.

So – there is no limit on the issuance of public debt in Japan, which is a very powerful denial of the sort of hocus pocus dished up by my mainstream colleagues, who propose all sorts of insolvency thresholds, which just amount to trying to distort the political debates in favour of less government involvement in the economy.

These thresholds are often passed and nothing happens.

It doesn’t stop them recycling them.

It is thus refreshing to hear the likely, incoming prime minister of Japan, speak frankly about these matters.

I did some calculations this morning using the latest Japanese government data.

Shinzo Abe came to office in December 2012 and has just announced he will step down as prime minister due to ill-health.

The following graph shows the shift in Bank of Japan holdings of outstanding government debt. 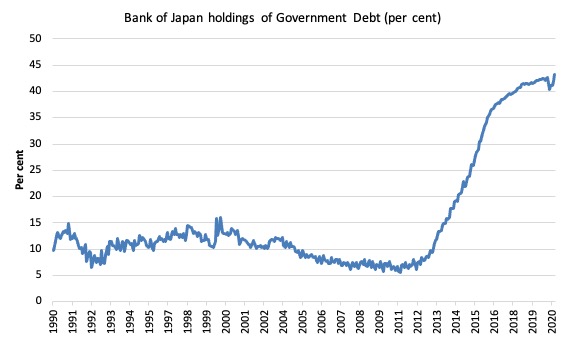 The following table shows that the change in Bank of Japan holdings of Japanese Government Bonds has been 222.3 per cent of the actual change in outstanding JGBs since December 2012.

That is, the increase in central bank holdings of JGBs since Shinzo Abe came to office has exceeded the actual change in outstanding JGBs by a factor of 2.22.

In other words, it has been effectively funding the entire fiscal deficits for the entire period.

Further, the secondary JGBs market has been very thin since the QQE program began and sellers in that market have declined.

Why? Because as the auction yields have gone negative, current bond holders who purchased the debt instrument at positive yields, will worry about having funds (from sales) which are only going to attract negative returns (losses). The smart strategy in that case is to maintain long positions.

So the corporate welfare is being squeezed.

Any talk that this could render the Bank of Japan insolvent is erroneous. Central banks can never become insolvent.

What these monetary operations really mean is that the Japanese government is spending by using credits created by the Bank of Japan, whatever else the accounting structures might lead one to believe.

Yes, the Bank of Japan is purchasing the government bonds in the secondary markets rather than in the primary issue.

But that doesn’t rescue the mainstream case.

It really is of no consequence that they are waiting for the bond dealers to make the market in the primary issuance phase and then hoover up all the debt next ‘day’.

With inflation low and stable, these dynamics surely put paid to the various myths that a currency-issuing government can run out of money and that central bank credits to facilitate government spending lead to hyperinflation.

This graph shows the acceleration in bond holdings (and total assets) since the pandemic hit. 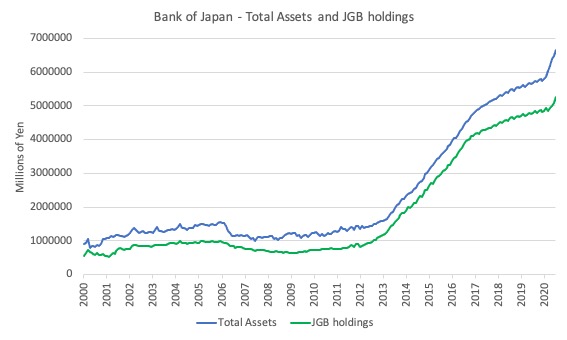 I also showed that the growth in the monetary base in Japan has been driven mostly by the various quantitative easing programs introduced by the Bank of Japan.

The Bank of Japan’s quantitative easing history began in earnest in March 2001 (QE1) and this increased the BOJs monetary base by around 66 per cent.

The Bank terminated that program in March 2006, whereupon the Bank sold down some of its holdings of JGBs.

A second (QE2) program began in October 2010 and as time has passed it has become QE3 and QQE, which is a much larger scale intervention that that began in April 2013 and continues at a pace today.

The monetary base increased by 36 per cent during QE2 and by, wait for it, 279 per cent in QE3/QQE to date. Not a small number.

You would expect if the mainstream macroeconomics predictions were robust then they should have materialised by now given these relative policy extremes.

The governor of Australia’s RBA does too but won’t admit it.

The reason Japan’s unemployment rate is so low

The Japanese government has not held back in dealing with the pandemic.

Its first stimulus package (April 7, 2020) injected ¥117.1 trillion (21.1 percent of 2019 GDP) into the economy, although some of the announced measures had already been foreshadowed in previous fiscal statements.

It also pledged $US100 million extra support to the IMF “to provide grant-based debt service relief for the poorest and most vulnerable countries to combat COVID-19” and gave an additional SDR3.6 billion to the IMF Poverty Reduction and Growth Trust.

So, not only looking after its own citizens but also seeking ways to help the worst off nations.

Meanwhile, the Bank of Japan continued to purchase JGBS “without setting an upper limit on its guidance on JGB purchases” (Source).

It is also providing interest-free, unsecured loans to SMEs of ¥90 trillion.

Compare that the Australian situation where the fiscal stimulus has been of the order of only 9.3 per cent of GDP over the period to 2023-24.

The State and Territory governments have added an extra 1.9 per cent of GDP in their programs.

And compare the labour market data that results:

1. The Labour force in Japan has risen by 0.1 points since January 2020, whereas the Australian labour force has shrunk by 1.6 per cent as employment opportunities dried up. In the Australian case, this has meant the official unemployment rate is an understatement of the joblessness that has arisen as a consequence of the pandemic.

3. Participation in Japan has remained unchanged but fallen by 1 per cent in Australia (as in point 1).

The following graph shows the evolution of the unemployment rates from July 2018 to July 2020. 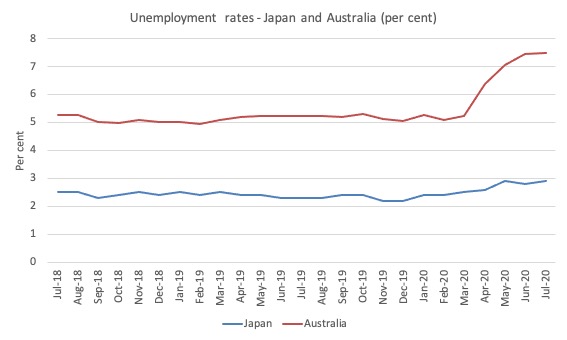 The differences in levels and dynamics between the two labour markets is largely due to the fiscal and monetary policy position of the respective governments.

The Japanese government values the welfare of its people more than the Australian government does.

The latter is more concerned with grandstanding about achieving fiscal surpluses that they never achieve (because they undermine the ambition by killing growth).

How refreshing it is to hear a national leader (of the third largest economy) openly admit the limits on government deficits and debt-issuance are only to be understood in terms of providing jobs and incomes for the citizens.

We will observe Mr Suga’s performance as the new Japanese PM with interest.

Among those who were touted as contenders for the job were some fiscal conservatives who had pushed the sales tax rises.

It is a relief that they have not got to the next step.

Bill Mitchell is a Professor in Economics and Director of the Centre of Full Employment and Equity (CofFEE), at the University of Newcastle, NSW, Australia. He is also a professional musician and plays guitar with the Melbourne Reggae-Dub band – Pressure Drop. The band was popular around the live music scene in Melbourne in the late 1970s and early 1980s. The band reformed in late 2010.
My articlesMy siteMy booksAbout me
Follow on:Twitter
Previous Please help a local community group in Newcastle, NSW
Next How would Job Guarantee wages be set?