by
Bill Mitchell
My articles My siteMy booksAbout me
Follow on:Twitter
Summary:
In my blog post – Japan about to walk the plank – again (September 30, 2019) – I predicted that the decision by the Japanese government to increase the sales tax from 8 per cent to 10 per cent on October 1, 2010 would undermine non-government spending and growth and was totally unnecessary anyway. The government had fallen prey to the deficit terrorists who have been consistently bullying them into believing that their fiscal position is about to collapse and the bond markets would desert them. Funny that! The Bank of Japan has been buying the bulk of the public debt issued over the last several years anyway. The reality is that, given the instability of world conditions (US-China trade, European slowdown, Brexit, and, more recently, the Corona virus impacts), the Japanese government

“We need the state to bail out the entire nation”

In my blog post – Japan about to walk the plank – again (September 30, 2019) – I predicted that the decision by the Japanese government to increase the sales tax from 8 per cent to 10 per cent on October 1, 2010 would undermine non-government spending and growth and was totally unnecessary anyway. The government had fallen prey to the deficit terrorists who have been consistently bullying them into believing that their fiscal position is about to collapse and the bond markets would desert them. Funny that! The Bank of Japan has been buying the bulk of the public debt issued over the last several years anyway. The reality is that, given the instability of world conditions (US-China trade, European slowdown, Brexit, and, more recently, the Corona virus impacts), the Japanese government should have been increasing its fiscal deficit. Yesterday (February 17, 2020), the latest national accounts data from Japan tells us the damage that this policy folly has inflicted. Every time the Japanese government has hiked the sales tax (1997, 2014, 2019) real GDP growth has plummetted and pushed the economy into recession. In the final quarter of 2019, Japan’s growth rate slumped by an annualised 6.3 per cent, driven by a massive 11.1 per cent decline in consumption spending and capital investment decline of 14.1 per cent. Sure enough, Typhoon Hagibis was also a factor but it is undeniable that the sales tax hike was instrumental. The Spanish philosopher George Santayana had it in one when in his first volume (1905) of his book – The Life of Reason: The Phases of Human Progress – said: “Those who cannot remember the past are condemned to repeat it”.

Two days after the Japanese government hiked its sales tax rate in a futile pursuit of cutting its deficit, I wrote in my blog post – Leading indicators are suggesting recession (October 3, 2019):

With the export sector (manufacturing) in trouble as a result of the world slowdown, the last thing that the Japanese government should have done was to introduce a destabilising negative force into its domestic sector (such as the consumption tax).

We will see in coming months how damaging that move will prove to be.

Well we have seen.

The first graph shows the quarterly and annual real GDP growth rates from the March-quarter 2007 to the December-quarter 2019.

1. Quarterly growth was down 1.61 per cent for the last three months of 2019. When the financial press report that Japan lumped by an annualised 6.3 per cent, they do that to make the quarterly result look worse than what it actually is.

Annualised means they assume the current quarterly performance will persist for the next three quarters so 1.61 by 4 gives the 6.3 result (approximately).

It is unlikely that the decline will be that severe, especially given the Government announced a stimulus package in November.

You can also see the ‘sales tax’ recession of 2014, which was the direct outcome of neo-liberal policy incompetence. 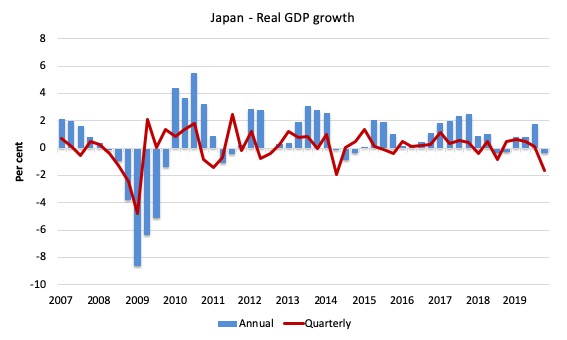 The following graph shows growth in private consumption spending since the March-quarter 2007 to the December-quarter 2019. The blue bars are the annual (year-on-year) outcome, while the red line is the quarterly result.

This is one of those magnificent graphs that you show students to demonstrate intervention effects of government policy. Private consumption growth was growing fairly strongly on up to the beginning of 2014, after the impacts of the GFC and the Tsunami had been overcome.

The sales tax hike had the predictable negative effect and the quarterly growth of private consumption ever since was rather subdued until confidence returned.

Then the Typhoon struck and this set back growth. But with government support, household consumption expenditure recovered somewhat only to be confronted with the October 1 sales tax hike.

And down it goes again following a similar trajectory to 2014. 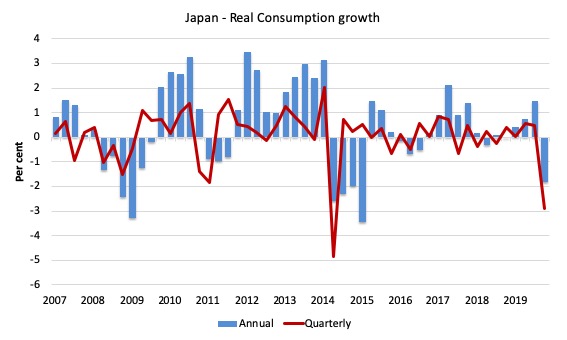 These boosts are in contrast to the mainstream macroeconomics, which consistently claims that the non-government sector will cut spending if the fiscal deficit rises. History tells us otherwise.

The following graph shows the annual and quarterly growth in private investment expenditure from the March-quarter 2007 to the December-quarter 2019. 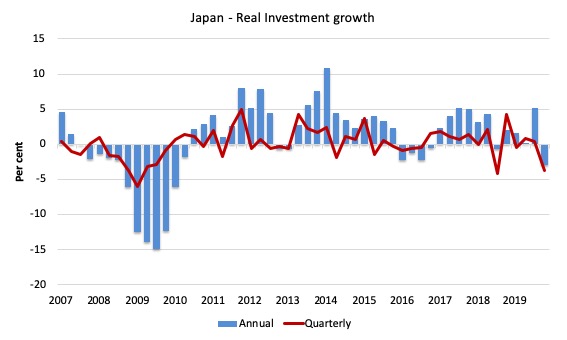 The following graph shows the Private non-residential investment ratio (per cent of GDP) frmo 1994 to the December-quarter 2019.

It fell from 16.2 per cent to 15.8 per cent in the final quarter of 2019, which is significant given that the denominator (GDP) was also falling. 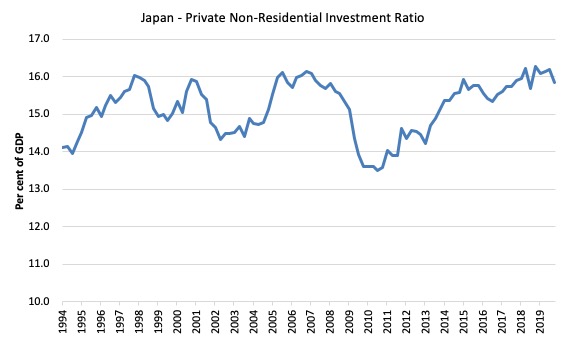 The ‘Sales Tax’ impact – a recurring nightmare for Japan

It is worth reminding ourselves of the folly of sales tax policy in Japan.

In April 2014, the Abe government raised the sales tax from 5 per cent to 8 per cent.

After the sales tax hike, there was a sharp drop in private consumption spending as a direct result of the policy shift. At the time, I predicted it would get worse unless they changed tack.

It certainly did get worse. Consumers stopped spending and the impact of static consumption expenditure was that business investment then lags.

Here is the history of real GDP growth (annualised) since the March-quarter 1994 to the December-quarter 2019. The red areas denote sales tax driven recessions.

In the three episodes shown, these recessions were followed by a renewed bout of fiscal stimulus (monetary policy was ‘loose’ throughout).

And in all the episodes, there was a rapid return to sustained growth as a result of the fiscal boost.

Nothing could be clearer. 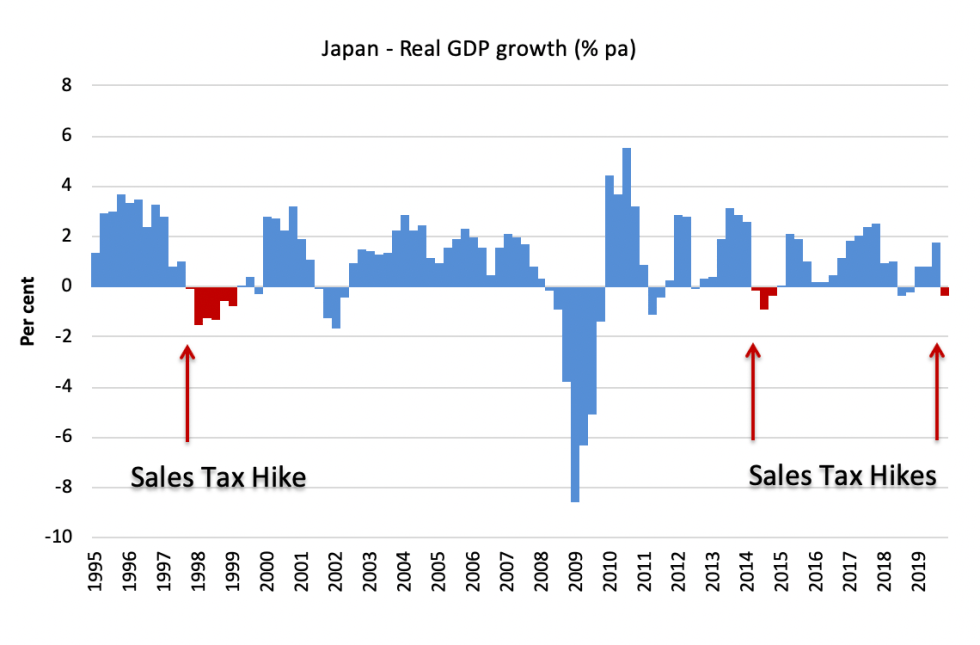 I provided detailed analysis of these historical shifts in these blog posts (among others):

You might wonder what happened in 2002? The recession that occurred then in Japan was largely driven by an export collapse (remember the US went into recession during this period) and a tightening of net public spending. This then provoked a fall in private investment spending and a rising saving rate. It had nothing to do with the ratings decision.

Once exports recovered and public spending support resumed the economy then grew relatively strongly despite the lower sovereign debt ratings.

The next graph shows the contributions (in percentage points) to real GDP growth of the major expenditure categories in Japan for the September-quarter 2019 (denoted last quarter) and the December-quarter (denoted current quarter).

The major categories of expenditure that you would expect to be affected by the sales tax hike, either directly (private consumption) or indirectly (private investment) were negatively impacted.

You may wonder why net exports contributed positively to growth in the December-quarter. It was on the back of a zero contribution from exports but a slump in import spending (sales tax related), which, of course, means the external drain on growth reduces. 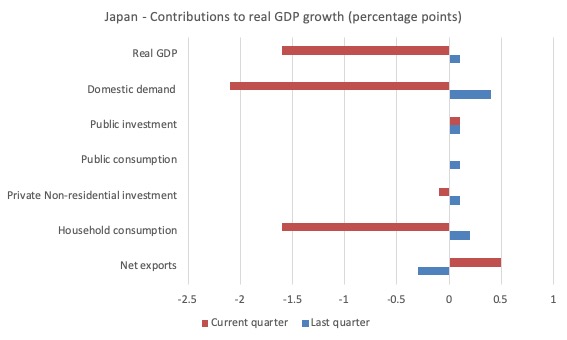 The Japanese Cabinet Office publishes a – Monthly survey of Consumer Confidence. The latest results, released on January 29, 2020 (for a survey conducted in January 15, 2020) tells us:

1. “The Consumer Confidence Index (seasonally adjusted series) in January 2020 was 39.1, the same as the previous month.”.

2. All components that influence the Consumer Perception Indices were positive:

Willingness to buy durable goods: 37.0 (up 0.4 from the previous month)

This suggests that the household spending will improve again after taking the sales tax hit.

The latest result (February 7, 2020) showed that conditions were “Worsening” in December 2019.

The following graph is their latest time series (since January 1985) of their ‘Coincident Index’, which is explained in this document – Guide for Using Composite Indexes and Diffusion Indexes.

Basically, the “composite indexes mainly aim to measure the tempo and the magnitude (“the volume”) of economic fluctuations”. The “coincident index … coincides with the business cycle, and is used to identify the current state of the economy.” 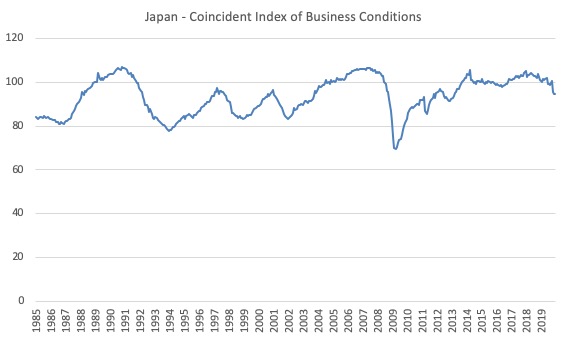 The latest Japanese National Accounts data continues to teach us lessons about monetary and fiscal policy.

We learn from the sales tax debacles and the most recent data that:

1. Fiscal policy works in both directions – trying to cut deficits when the economy is below full employment will reduce economic growth (and vice versa).

2. Monetary policy does little to stimulate real spending in a monetary economy and can not offset contractionary movements in fiscal policy. The Bank of Japan has been engaging in more quantitative easing and interest rates remain around zero – but there has so far been very little real GDP impact.

Today I am in Athens and later will be in Paris.

I encourage you to support these public events in the UK:

1. February 20, 2020 – I will speaking in London about the recent political events in the UK and how an understanding of MMT is essential to rebuild a progressive political force in Britain. Criminologist Steve Hall will also talk and will focus on the current rise of populism in the West.

The event will be at the Barnes Wallis Building (The Harwood Room) at the University of Manchester and will run from 13:30 to 16:30.

This is a teaching seminar exclusively and will suit those who want to build their understanding of macroeconomics from an MMT perspective.

There are still vacancies available.

Bill Mitchell is a Professor in Economics and Director of the Centre of Full Employment and Equity (CofFEE), at the University of Newcastle, NSW, Australia. He is also a professional musician and plays guitar with the Melbourne Reggae-Dub band – Pressure Drop. The band was popular around the live music scene in Melbourne in the late 1970s and early 1980s. The band reformed in late 2010.
My articlesMy siteMy booksAbout me
Follow on:Twitter
Previous Fiscal stimulus disappears into saving – solution – bigger stimulus was needed in the first place
Next British Labour seems to think that HM Treasury can dominate the elected politicians