The job losses continue in Australia but at a slower pace

by
Bill Mitchell
My articles My siteMy booksAbout me
Follow on:Twitter
Summary:
One bit of good news yesterday was that the Supercars event that has been imposed on the City of Newcastle over the last 3 years will not go ahead this year. This is an event that has massive state subsidies, creates health hazards for local residents, lies about crowd numbers to justify further state subsidies and severely divides the local community. They claim they love Newcastle, but with only a few events possible this year, they are clearly going where the highest subsidies are likely. So that is a relief for the inner city community. But there is not much else that one can be happy about right now. Today (May 19, 2020), the Australian Bureau of Statistics released their latest weekly employment data taken from Australian Tax Office data, which they release and analyse on a two-week


Bill Mitchell writes Governments should be working for everyone, not just the fortunate few

Bill Mitchell writes Why improve policy when a government can pillory a low-paid, precarious worker instead

Podcast – What is modern monetary theory and could it fix Australia’s problems?

Governments should be working for everyone, not just the fortunate few

Why improve policy when a government can pillory a low-paid, precarious worker instead

One bit of good news yesterday was that the Supercars event that has been imposed on the City of Newcastle over the last 3 years will not go ahead this year. This is an event that has massive state subsidies, creates health hazards for local residents, lies about crowd numbers to justify further state subsidies and severely divides the local community. They claim they love Newcastle, but with only a few events possible this year, they are clearly going where the highest subsidies are likely. So that is a relief for the inner city community. But there is not much else that one can be happy about right now. Today (May 19, 2020), the Australian Bureau of Statistics released their latest weekly employment data taken from Australian Tax Office data, which they release and analyse on a two-week cycle. The latest edition came out today – Weekly Payroll Jobs and Wages in Australia, Week ending 2 May 2020 – which covers the new data from April 18, 2020 to May 2, 2020. The data is suggesting that the worst of the job losses are now over, which doesn’t mean where we are at at present is nothing short of shocking. As the lockdown eases, we can now expect more jobs to come back. The question is how many businesses will go to the wall before we get a more usual scale of operation and interaction. My prediction is that many will disappear and so the recovery in employment will be protracted given how many jobs have been lost to date. A much larger fiscal intervention is required and it has to be directed at workers rather than firms and support direct job creation.

Relevant blog posts as I trace this data trail over time are:

In terms of the coverage of the ATO Single Touch Payroll data, the ABS report that:

Approximately 99% of substantial employers (those with 20 or more employees) and 71% of small employers (19 or less employees) are currently reporting through Single Touch Payroll.

Here is what has happened to total employment in Australia since January 4, 2020 (the ATO data starts at the beginning of the year). The index is based at 100 on March 14, 2020 which appears to be around the peak employment, although it was slowing since February 29, 2020.

The pace of contraction is slowing which suggests we may have reached some sort of trough. 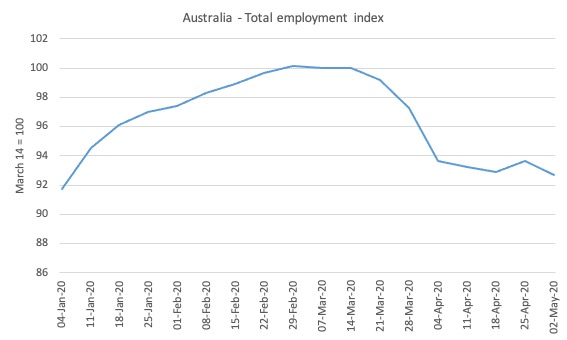 Here is the same series decomposed by gender.

While the pattern was almost identical for males and females up to March 22, 2020, the data for the earlier parts of April showed that the crisis was impacting disproportionately on females.

That bias does not seem to have persisted. 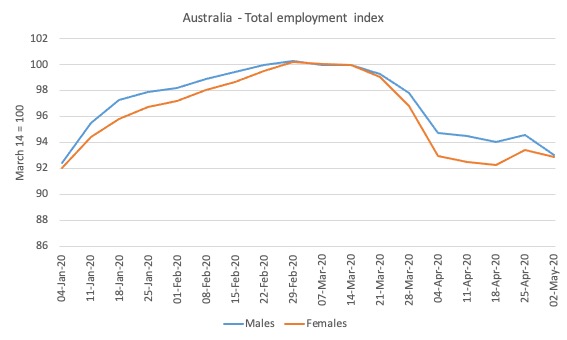 The idea that we may have reached a trough is supported by additional data released by the ABS yesterday – Household Impacts of COVID-19 Survey, 29 Apr – 4 May 2020 .

This data shows that people were regaining employment in early May.

The ABS note that:

While these increases were not statistically significant, given the margin of error, it may indicate some improvement in labour market conditions.

What does this imply?

We can do some ‘back-of-the-envelope’ calculations with some assumptions to see what this might imply.

Given that “not all jobs in the Australian labour market are captured within these estimates”, the ABS urges caution in extrapolating them in the way I have above. But, I also emphasise that my calculations are not to be interpreted as being exact statements.

They are just ball park figures.

The age breakdowns for Australia as a whole are shown in the next graph.

It is clear that our youth are bearing the brunt of the crisis, largely due to the industrial composition of the job losses – services, accommodation etc. 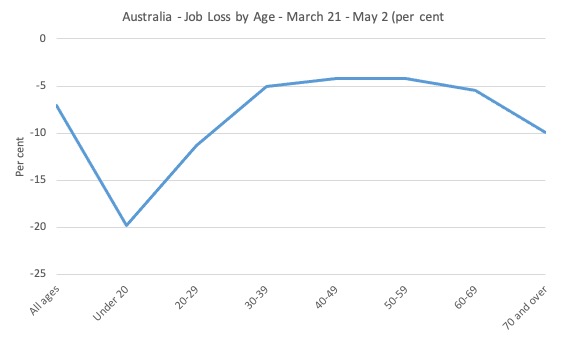 The following sequence of graphs gives the age profiles of the job loss for each State/Territory – be careful to appreciate the difference in the vertical scales.

But for most states, the around 20 per cent of teenage jobs have gone and many are not being supported by the JobKeeper wage subsidy because of their casual status. 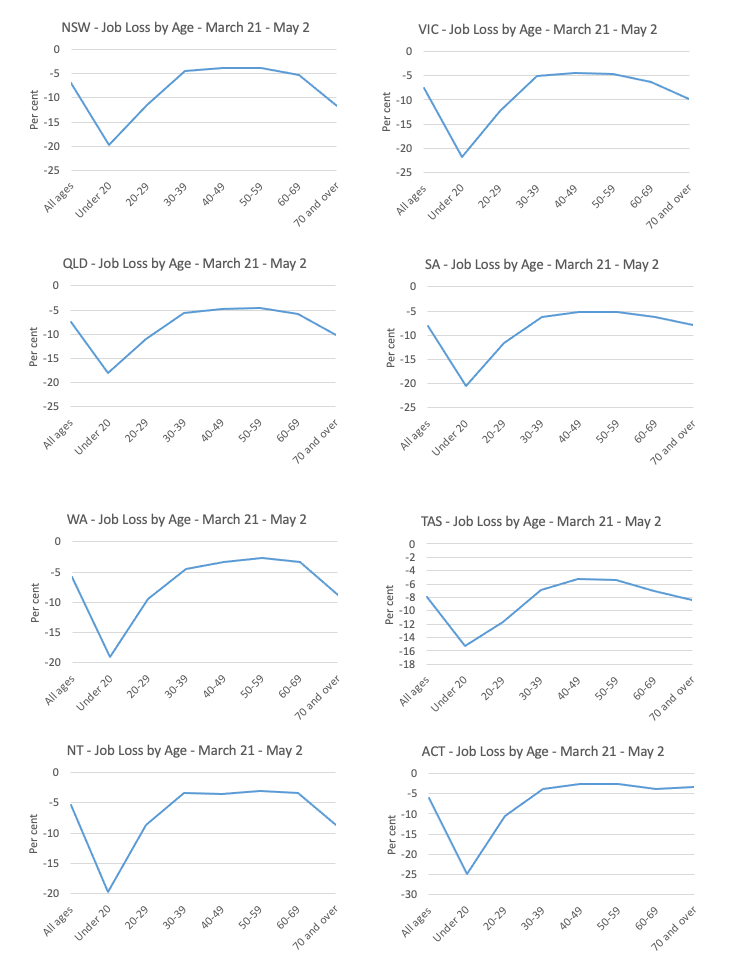 The following graph shows the percentage decline in employment between March 21, 2020 and May 2, 2020 for the Australian industry sectors.

The red line is the national average loss (7.3 per cent).

Since the last release of this data, two weeks ago, the job loss in these sectors has moderated, and with the lockdown arrangements steadily easing, there will be a fairly quick bounce back.

I have done a lot of press interviews today because my research centre (CofFEE) publicly released our – Employment Vulnerability Index – Version 3.0 – and the point I have been making is that it is too early yet to tell how quickly this bounce back will occur.

It all depends on how many businesses survive the lockdown. The evidence is that many are not going to make it through and so there will be residual job loss that will take time to resolve. That will also depend on government holding the fiscal support for longer than they currently plan.

Other sectors that deal face-to-face with people are also affected (Other services, 10.3 per cent; Rental, hiring and real estate services, 12.8 per cent). The atypical sector affected this time is the Professional, scientific and technical services (-11.1 per cent). This sector does not usually experience large job losses during a typical spending gap-driven recession. 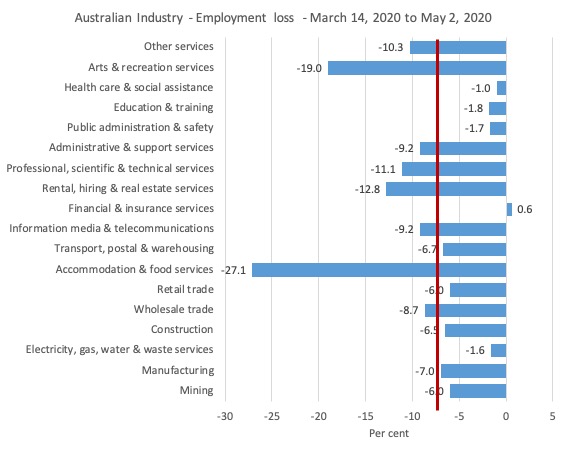 In today’s release, the ABS provided detailed regional level breakdown of the job losses at the SA4 geographic unit. This is their standard geographic region for disseminating labour force data at the regional level and it is a combination of several ‘suburbs’.

I will analyse the spatial pattern with maps in a later post.

But the spatial pattern at the State and Territory level is shown in the following graph.

Above-national average (-7.3 per cent) employment losses between March 21, 2020 and April 18, 2020 have been recorded in the most-populace states 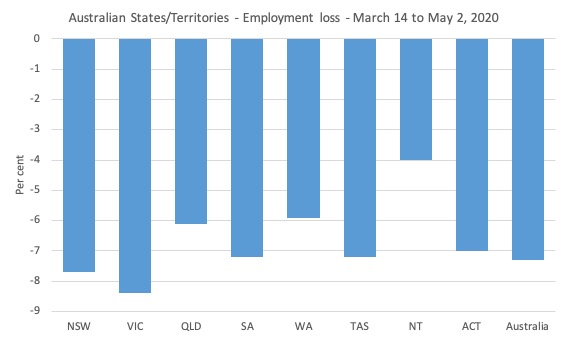 Here are some maps of the job losses (by SA4 regional areas). 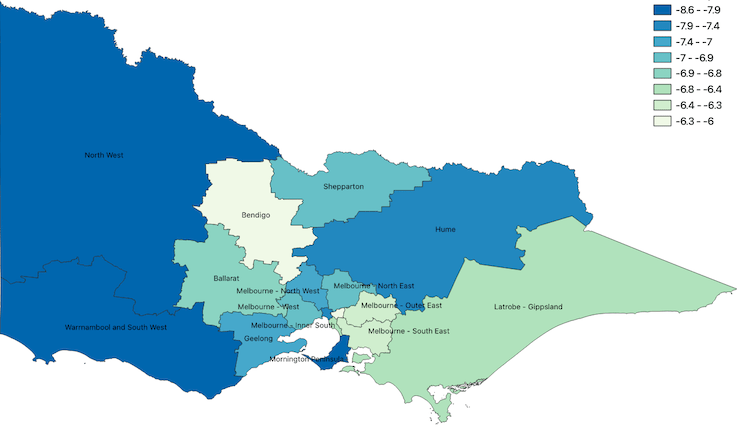 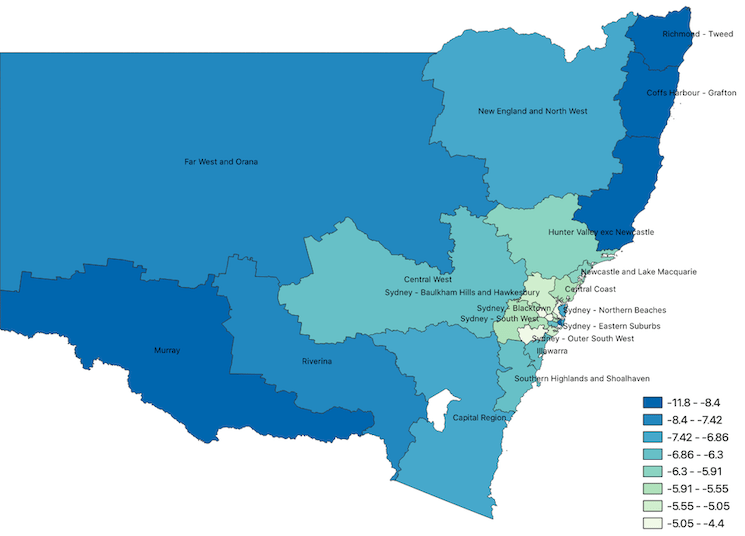 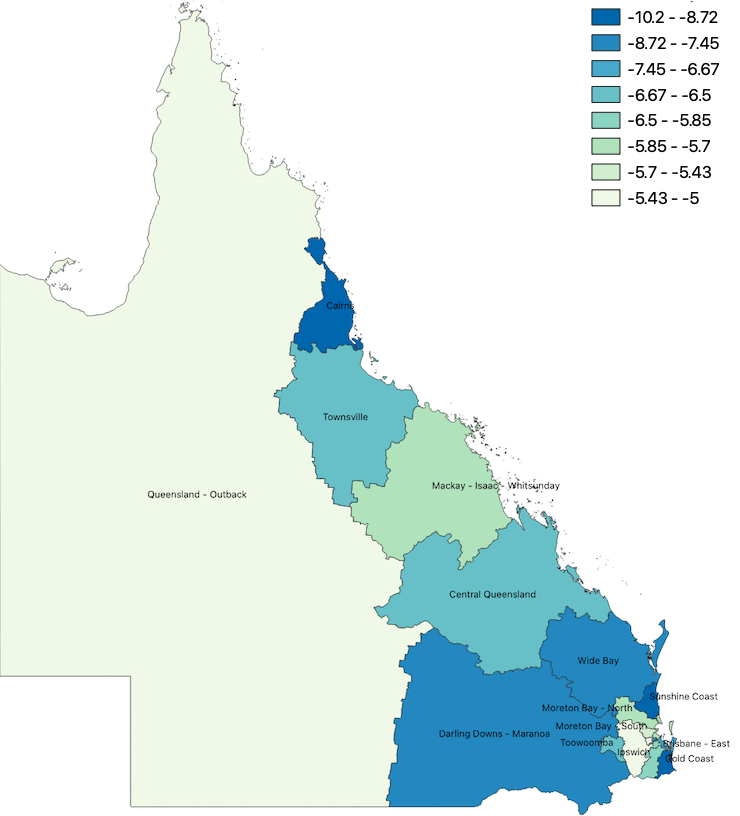 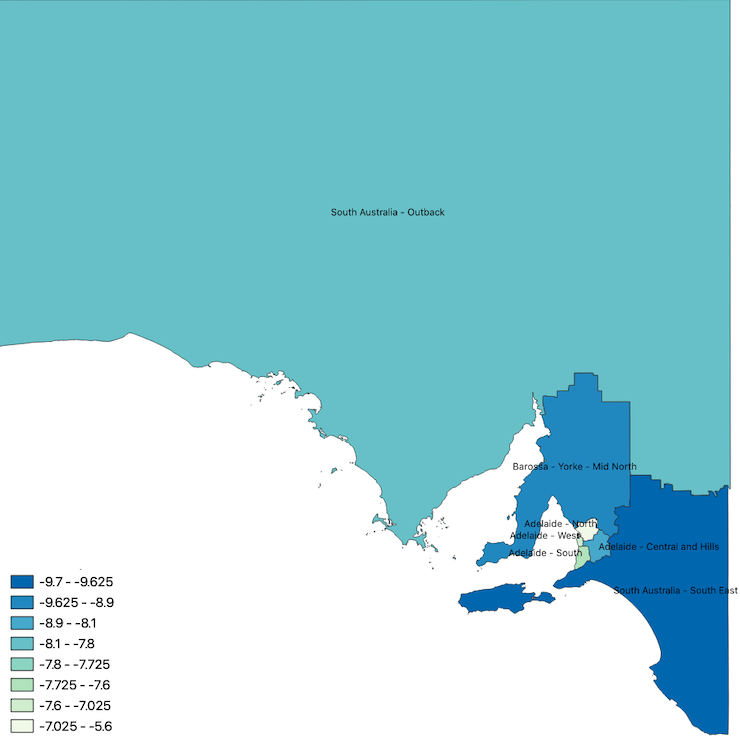 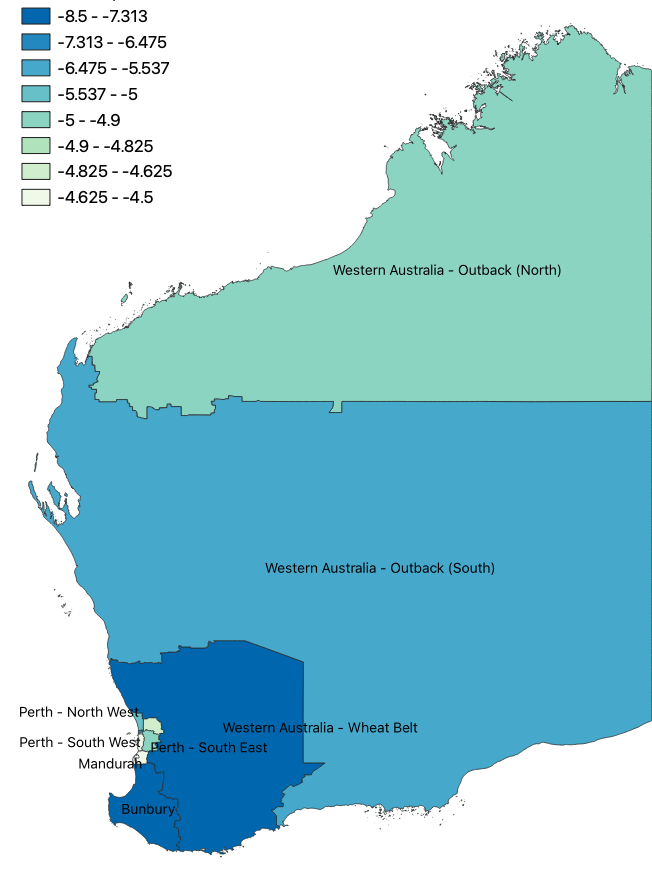 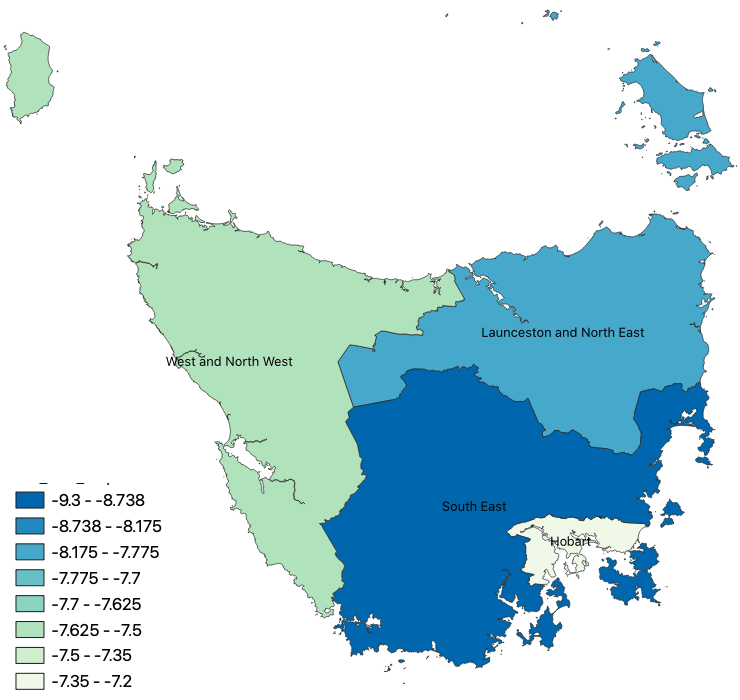 I will do the Territories in the next version of the data in two weeks.

Wages paid are no longer falling

Which suggests the worst is over.

The new narrative – take advantage of the disadvantaged

… under pressure to turn up the heat on unemployed Australians – even while work opportunities don’t exist – as private agencies set out to win public money for every new client they sign to a job plan.

The agencies are forcing their ‘consultants’ to use “unethical” techniques, under threat of dismissal, in order to reduce the case load and get payments from the government.

The agencies are struggling to make cash on the back of the unemployed given the lack of job opportunities they can steer their unemployed case load into.

Such is the ‘unemployment industry’ in Australia – the most unproductive industry there is (close to the financial markets) – that was created by the privatisation of the public employment service in the 1990s.

Then we read the headline – (May 18, 2020) – where the former head of the Fair Pay Commission (which sets the minimum wage for Australia) was claiming that the wage setting tribunal should freeze the minimum wage – it gets adjusted annually in June.

He claimed that this would stop “struggling employers” from cutting jobs and hours of work.

So he is basically advocating a real wage cut for the most vulnerable workers – many of whom are at the front-line of the COVID-19 health services – cleaners etc.

We haven’t learned much have we?

These workers have already suffered penalty rate cuts courtesy of this government.

And now there are calls from business and their academic lackeys to hack into minimum wage adjustments.

My view is the opposite.

I would increase the minimum wage substantially to reduce the disadvantage of this cohort of workers, many of whom are outside the wage subsidy scheme that the Government has introduced.

If the businesses that employ them are struggling then it is the responsibility of government to reduce the circumstances facing them rather than force all the risk back onto the least-paid workers in Australia.

The Australian government could not only easily guarantee the wages of all workers affected but ensure that the businesses they work for are not subjected to tax liabilities and other charges that might reduce their willingness to maintain employment.

Given the scale of the crisis, now is not the time to be pushing for real wage cuts for the lowest-paid workers.

I have heard very little from the Left about this. The Right is all for the cuts.

While the Federal government has certainly shifted its policy tune in the last 6 weeks after scorching the economy for some years as it obsessively pursued a totally inappropriate fiscal surplus, the evidence is clear – its current intervention is wrongly crafted and in absolute quantum, way below what is necessary.

The scale of the job loss is now falling and perhaps we are now seen the worst of it.

But the remaining unemployment is devastating and the reality is that the Federal government chooses the unemployment rate and could do something about the massive spike in joblessness tomorrow if it so chose.

Bill Mitchell is a Professor in Economics and Director of the Centre of Full Employment and Equity (CofFEE), at the University of Newcastle, NSW, Australia. He is also a professional musician and plays guitar with the Melbourne Reggae-Dub band – Pressure Drop. The band was popular around the live music scene in Melbourne in the late 1970s and early 1980s. The band reformed in late 2010.
My articlesMy siteMy booksAbout me
Follow on:Twitter
Previous US labour market in peril as a result of political choices made by the US government
Next Progressives still speak the language of the neoliberals but then dream of change

“I Take That as a Threat”: Big Pharma Is Meddling in the Race for a COVID-19 Treatment