Home / Bill Mitchell / How would Job Guarantee wages be set?

How would Job Guarantee wages be set?

by
Bill Mitchell
My articles My siteMy booksAbout me
Follow on:Twitter
Summary:
It is Wednesday so some snippets and some music – sad music this week because it signals the death of one of the great pioneers of Jamaican music last week. I am holding a Mini-Music Festival today – right here on my blog. Join in an celebrate a legend. But a few economics matters first pertaining to the Job Guarantee and the nonsensical arguments I have been seeing in the media about it being a system of enslavement and not better than a system that forces workers into unemployment. Job Guarantee wage setting in Australian context I get sent various screenshots from Facebook and other social media debates about my work. I don’t solicit them nor particularly welcome them. I have formed the view that much of the ‘conversation’ on Facebook is not helpful to advancing an education in Modern

It is Wednesday so some snippets and some music – sad music this week because it signals the death of one of the great pioneers of Jamaican music last week. I am holding a Mini-Music Festival today – right here on my blog. Join in an celebrate a legend. But a few economics matters first pertaining to the Job Guarantee and the nonsensical arguments I have been seeing in the media about it being a system of enslavement and not better than a system that forces workers into unemployment.

I get sent various screenshots from Facebook and other social media debates about my work. I don’t solicit them nor particularly welcome them.

I have formed the view that much of the ‘conversation’ on Facebook is not helpful to advancing an education in Modern Monetary Theory (MMT).

As an example, last week, apparently there was a debate on Facebook about how Job Guarantee wages would be set.

It follows some stupid Op Ed (the Ed bit being missing) articles claiming that the Job Guarantee would be oppressive and not allow workers to bargain for their wages because the government would just dictate the levels.

The debate I saw parts of then launched into this topic reaching all sorts of conclusions that were spurious and venturing that the MMT originators really hadn’t thought any of this out etc. Ad nauseum.

We have written about this in the past and a moment’s research would have solved the question in the first place.

In Australia, we have a judicial process, independent (largely) of government, where wages are set.

There is some collective bargaining and the conservatives tried to increase the incidence of individual bargaining (because they knew workers would be screwed given the power imbalance).

Further, trade union membership in Australia has sharply declined since the 1990s.

The Australian Bureau of Statistics reported that in August 2016:

Between 1976 and 2016, the number of trade union members decline from 2.5 million to 1.5 million, and given the labour force growth over that period, the density rates fell from 51 per cent to 14 per cent (Source).

This graph is taken from that cited article provided by the Parliamentary Library of Australia (October 15, 2018) – Trends in union membership in Australia and tells the story. 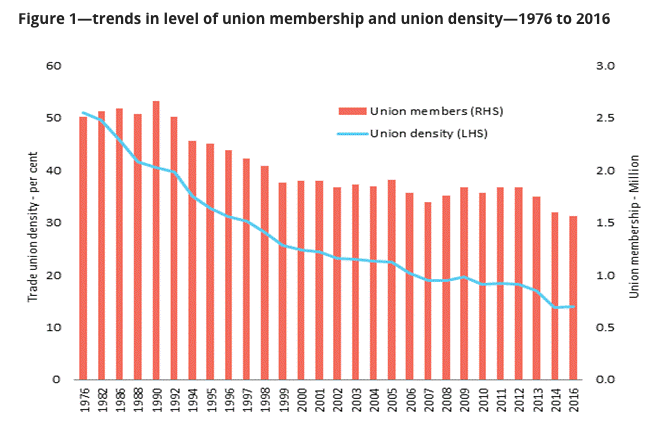 So the idea that most Australian workers are represented by a union which then achieves wage outcomes for them is far fetched.

The reality is that the Fair Work Commission and its predecessor Conciliation and Arbitration Tribunals set the minimum wage and the award wages that flow from that setting.

The – National Minimum Wage Orders – are set annually via a judicial process.

I have been involved in these processes regularly on behalf of the unions.

The so-called Minimum Wage Order is then applied to minimum award wages across the plethora of award wage agreements that are set in the Commission.

Only workers who have achieved an enterprise bargain that has not fallen below the relevant judicial award are not covered by the decisions of the Commission.

So the Job Guarantee wage would not be a government dictate and workers through their relevant representatives would have the ability to influence the decisions of the Commission, just like a significant number of workers in Australia.

The idea that these other workers enjoy the capacity to set their own wages and Job Guarantee workers would not enjoy that capacity is ludicrous once you understand how wages are set in Australia.

Further, while the Job Guarantee wage would represent the minimum wage in Australia if such a program was introduced, I always emphasise that it would be a socially-inclusive minimum, which would be much higher than the current federal minimum today.

That would mean changing the legislation that binds and guides the Fair Work Commission in its deliberations.

1. The Commission would have to determine an annual productivity bonus (as it did under a different guise before neoliberalism) that would be passed onto all workers, including Job Guarantee workers.

This would allow the low-paid, who have limited power to complete enterprise bargaining agreements and who work in small workplaces that may not be capital intensive (hence high productivity) to enjoy real wage gains in line with the overall capacity of the economy.

That is an equity measure.

2. In determining what ‘socially-inclusive’ meant the considerations would move beyond simple ‘capacity to pay’ arguments from employers, and, instead, take into account factors that allow a person to be ‘included’ in society – housing costs, entertainment and dining out costs, transport costs, holiday costs, etc.

Forcing those considerations would take us away from the narrow private profit considerations that dominate current wage setting and ensure that the minimum wage allowed a worker the opportunity to participate meaningfully in society.

This type of wage setting system is nothing at all like what the critics, who want to cast the Job Guarantee as workfare, have claimed we advocate.

This wage setting would be more progressive and fair than anything we have seen in the past.

The Job Guarantee is not much different to the NAIRU

Then, last week, a ‘senior economist’ from a centre that proffers itself as a progressive voice in the Australian policy context, claimed on Twitter that the Job Guarantee was “not a real departure from NAIRU”.

An astounding claim when you think about.

I wrote to the Director of that Centre and asked him:

Are we to conclude that the position of your Centre … considers that a guaranteed job at a socially-inclusive minimum wage (well above the current minimum wage in Australia), that provides holiday pay, sick pay, special leave, statutory employer contributions to superannuation, choice of hours of work, opportunities to undertake training and formal education within the paid-work environment, and can be held indefinitely if desired, is “not a real departure” from rendering a person unemployed and forced to undertake pernicious work tests in return for a below-poverty line income support payment?

I received a reply indicating that the Director was not concerned with the Twitter claim. Thus answering my question by implication.

The other part of the Twitter claim was that with a Job Guarantee, “higher wage workers are laid off to enter low-wage JG”.

I pointed out to the Director that this claim defies empirical logic.

Even when official unemployment is high, higher wage workers rarely have to endure job loss.

And when higher-wage workers do lose their jobs they typically are able to draw on redundancy payouts, which allow them to enter ‘wait unemployment’ and see out the crisis.

The following graph illustrates what happens to unemployment rates over the economic cycle.

These levels are matched fairly closely with pay levels.

Even during the 1991 recession, the worst downturn since the Great Depression (to that date) the tertiary educated workers (who would form the higher paying workers) only saw their unemployment rate rise to 5.7 percent and drop quickly after that.

By contrast, the least educated (and paid) saw their unemployment rates rise well above 11 per cent and hover at those elevated rates for some years.

Would the low paid workers have preferred a Job Guarantee to that situation? Almost assuredly.

Would the highly paid workers have been forced into the Job Guarantee? Most had redundancy payments and other resources.

I am finding a lot of statements about the Job Guarantee to be really ill informed and bizarre.

Frederick Nathaniel “Toots” Hibbert – was a Jamaican singer and songwriter who died at the age of 77 in Kingston last week (September 11, 2020) from COVID-19 complications.

His band – Toots and the Maytals – were giants in the reggae scene and one of my favourite bands.

His early recording (1968) – Do the Reggay – coined the name for the music, which followed a mighty lineage from Blue Beat, Ska, Rock Steady, then Reggae music.

‘The Reggay’ was a dance fad in the Kingston music clubs.

Toots was described as being “the nearest thing to Otis Redding left on the planet!”

I loved listening to his singing and learned a lot from his guitar players, who had such an unmistakable groove.

Here is a documentary about Toots, which is worth the time spent watching.

Very sad to see him leave us.

So let’s have a Toots and the Maytals Mini-Festival today. There are so many magic numbers – here is a selection.

Pomps and Pride from Funky Kingston, 1972

Love Is Gonna Let Me Down from Funky Kingston, 1972

My Melbourne band was named after this song.

Bill Mitchell is a Professor in Economics and Director of the Centre of Full Employment and Equity (CofFEE), at the University of Newcastle, NSW, Australia. He is also a professional musician and plays guitar with the Melbourne Reggae-Dub band – Pressure Drop. The band was popular around the live music scene in Melbourne in the late 1970s and early 1980s. The band reformed in late 2010.
My articlesMy siteMy booksAbout me
Follow on:Twitter
Previous There is no limit to government debt issuance – if you have your own currency
Next Australian labour market – improving modestly but much more fiscal stimulus is required