by
Bill Mitchell
My articles My siteAbout meMy booksMy videos
Follow on:Twitter
Summary:
The latest data from the Australian Bureau of Statistics – Labour Force, Australia, February 2021 – released today (March 18, 2021), shows that the labour market has accelerated its pace of recovery from the pandemic recession. Employment increased by 0.7 per cent (88,700) in the month and unemployment fell by 69.900 to 805.2 thousand persons. As a result the unemployment rate fell by 0.5 points to 5.8 per cent, which with participation stable, is a good outcome. The main uncertainty now is that the recovery is still dependent on government fiscal support, which is due at the end of this month (March 2021). Given the labour market is still quite a margin from where it was in March 2020, the idea that the government would withdraw its fiscal support is not a compelling option. Overall, the

The inflation mania is growing – but manias are manias

The latest data from the Australian Bureau of Statistics – Labour Force, Australia, February 2021 – released today (March 18, 2021), shows that the labour market has accelerated its pace of recovery from the pandemic recession. Employment increased by 0.7 per cent (88,700) in the month and unemployment fell by 69.900 to 805.2 thousand persons. As a result the unemployment rate fell by 0.5 points to 5.8 per cent, which with participation stable, is a good outcome. The main uncertainty now is that the recovery is still dependent on government fiscal support, which is due at the end of this month (March 2021). Given the labour market is still quite a margin from where it was in March 2020, the idea that the government would withdraw its fiscal support is not a compelling option. Overall, the recovery is still too slow and more government support by way of large-scale job creation is needed.

1. Employment growth was 0.6 per cent which represents are fairly robust monthly rebound.

3. So overall Australia is just about back to where it was before the pandemic hit, but only in aggregate terms. There are some sectors that are still languishing while others are rebounding strongly. 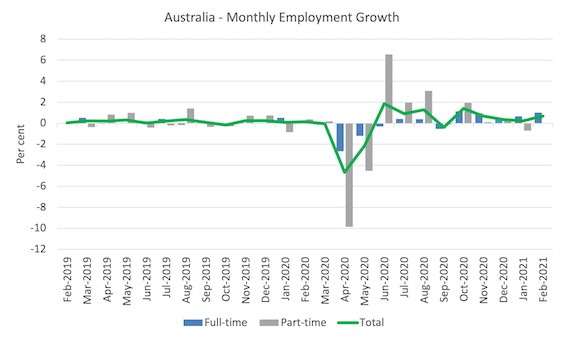 1. Total employment has risen by 468.8 thousand and 41.9 per cent of that increase has been in part-time work.

2. Full-time employment is still below the March level by 53.3 thousand. 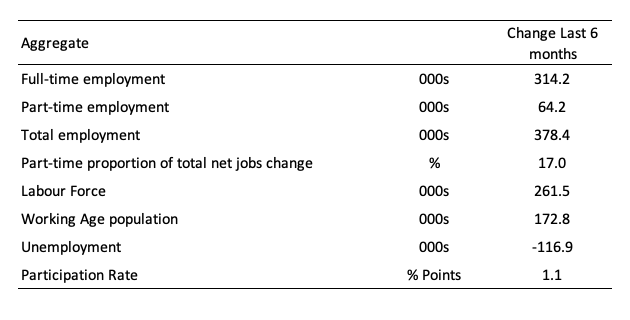 The following graph shows the Employment-to-Population ratio, since June 2008 (the low-point unemployment rate of the last cycle). 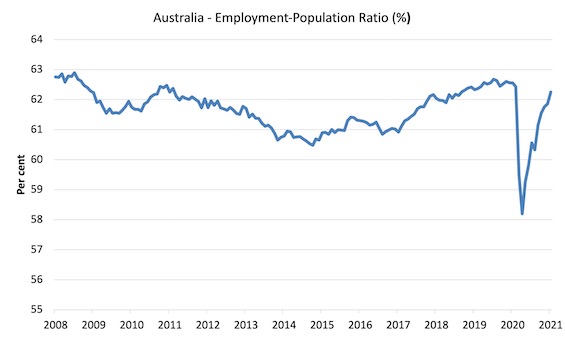 3. So far in 2021, the average monthly change is 59.1 thousand and you can see that from the graph that this is exceptional, although it has only been for two months so far. 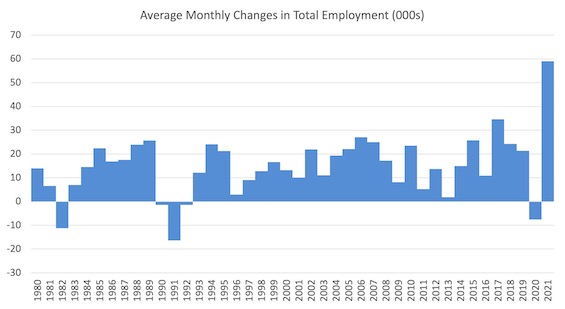 But the slow recovery of full-time employment signals that the demand-side impacts from the lockdown have had wider effects. 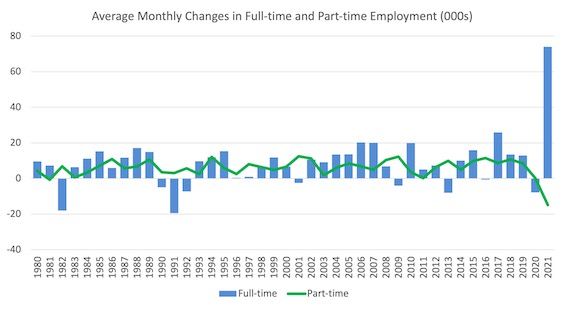 In the past, I have shown the impact of the 120 day harsh lockdown in Victoria from June 2020. But since December, Victoria has been recovering strongly and has closed the gap with the other states.

It is now the second best performed state behind Queensland (on 0.2 points in it). 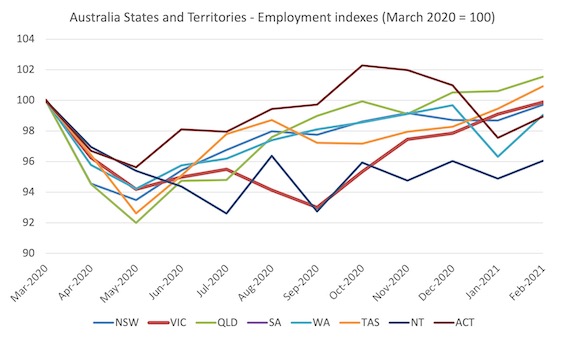 The recovery in hours worked as the various state lockdowns eased was strong this month.

Last month’s sharp fall appeared to be the result of an unseasonally large, seasonal exit to the beach and camping sites as a result of the pent-up holiday demand after the 2020 lockdowns.

The dark linear line is a simple regression trend of the monthly change – which depicts a flat trend. Even before the coronavirus crisis struck, the trend was trending downwards (but will flatten a bit once the February exodus is reversed in subsequent months). 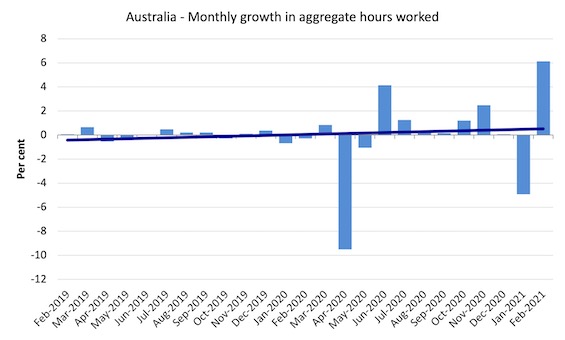 The official unemployment rate fell 0.5 points to 5.8 per cent as the rise in employment (88.7 thousand) vastly outstripped the rise in the labour force (18.8) with participation stable.

The following graph shows the national unemployment rate from February 1980 to February 2021. The longer time-series helps frame some perspective to what is happening at present.

1. There is still considerable slack in the labour market that could be absorbed with further fiscal stimulus. Unemployment remains 109,500 above the February 2020 level. 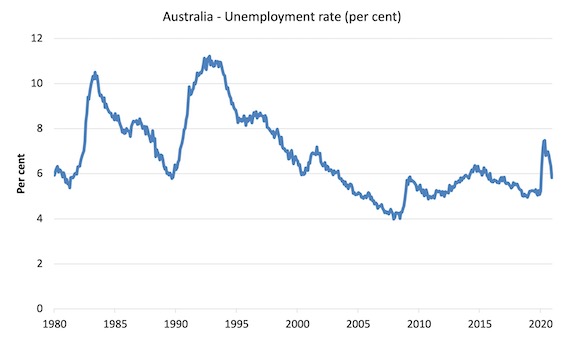 Broad labour underutilisation decreased by 0.1 points to 14.4 per cent in February 2021

The results for February 2021 are (seasonally adjusted):

2. Overall there are 1,178.7 thousand underemployed workers.

3. The total labour underutilisation rate (unemployment plus underemployment) decreased by 0.1 points to 14.4 per cent all as a result of the decline in unemployment.

4. There were a total of 1,983.9 thousand workers either unemployed or underemployed.

The following graph plots the seasonally-adjusted underemployment rate in Australia from February 1980 to the February 2021 (blue line) and the broad underutilisation rate over the same period (green line). 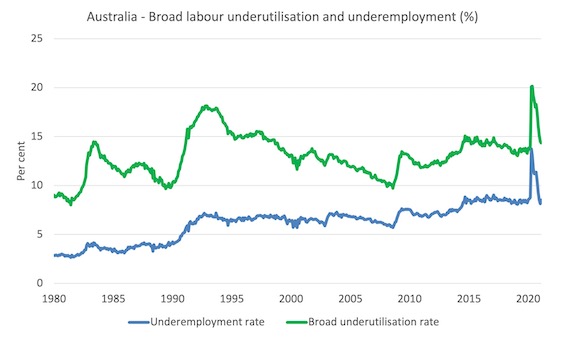 With the participation steady this month, I expect no changes in hidden unemployment. Please read my blog post – Australian labour underutilisation rate is at least 13.4 per cent – for more discussion on this point.

But the recovery is evident.

After 11 months, the unemployment had risen from 100 to: 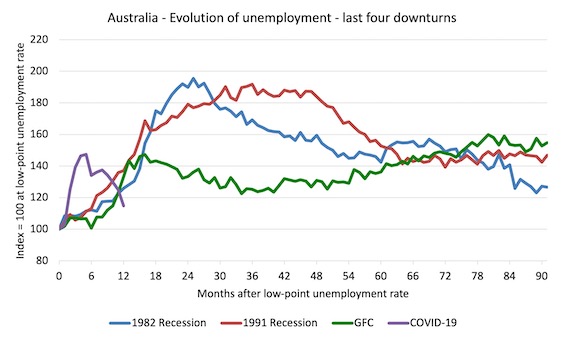 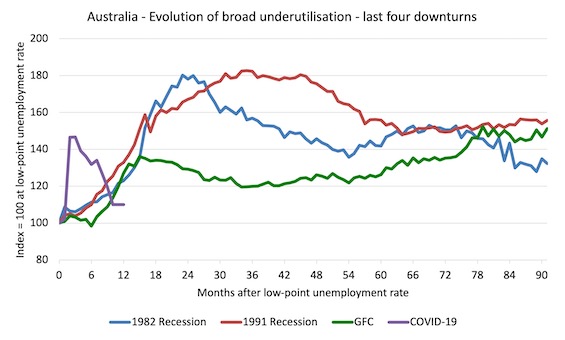 3. The teenage unemployment rate fell by 2.2 points to 16.6 per cent and the participation rate fell by 0.3 points.

3. The overall teenage employment-population ratio has fallen by 5.8 percentage points and 0.6 points since March 2020, but rose 0.95 points over the month. 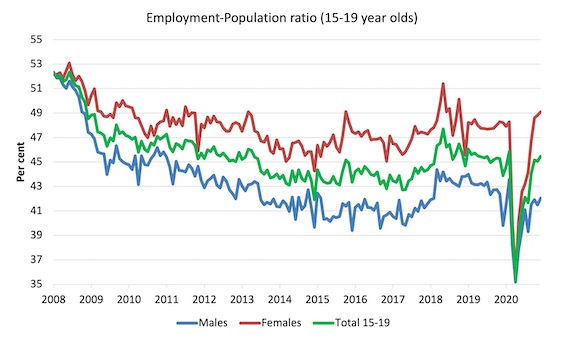 The February 2021 data reveals that the Australian labour market continues to recover – and while the recovery had stalled a bit over the latter part of 2020, the February result is relatively strong.

1. Total employment is nearly back to where it was in February 2020 but there are major sectoral differences – some sectors are still in deep recession while others are booming.

2. The main uncertainty now is that the recovery is slowing and the current (extensive) government support is due to end in March 2021. Given the labour market is still quite a margin from where it was in March 2020, the idea that the government would withdraw its fiscal support is not a compelling option.

Bill Mitchell is a Professor in Economics and Director of the Centre of Full Employment and Equity (CofFEE), at the University of Newcastle, NSW, Australia. He is also a professional musician and plays guitar with the Melbourne Reggae-Dub band – Pressure Drop. The band was popular around the live music scene in Melbourne in the late 1970s and early 1980s. The band reformed in late 2010.
My articlesMy siteAbout meMy books
Follow on:Twitter
Previous Why economists kept getting the policies right!
Next The Weekend Quiz – March 20-21, 2021