by
Bill Mitchell
My articles My siteAbout meMy booksMy videos
Follow on:Twitter
Summary:
Today (June 17, 2021), the Australian Bureau of Statistics put out the latest – Labour Force, Australia – for May 2021. The data shows that employment increased by 115,200 (which is strong), monthly hours worked increased by 1.4 per cent, unemployment fell by 53,000 (which is excellent), the unemployment rate fell 0.4 points to 5.1 per cent, the participation rate rose 0.3 points (good) and underemployment fell by 0.4 points to 7.4 per cent (excellent). It is hard not to see all these results in a positive light. More jobs are being created, more people are coming back into the labour force and fewer people are being underutilised relative to their desired work intentions. This reverses to some extent the backward step the labour market took last month. The labour market is still 237.1

Today (June 17, 2021), the Australian Bureau of Statistics put out the latest – Labour Force, Australia – for May 2021. The data shows that employment increased by 115,200 (which is strong), monthly hours worked increased by 1.4 per cent, unemployment fell by 53,000 (which is excellent), the unemployment rate fell 0.4 points to 5.1 per cent, the participation rate rose 0.3 points (good) and underemployment fell by 0.4 points to 7.4 per cent (excellent). It is hard not to see all these results in a positive light. More jobs are being created, more people are coming back into the labour force and fewer people are being underutilised relative to their desired work intentions. This reverses to some extent the backward step the labour market took last month. The labour market is still 237.1 thousand jobs of where it would have been if employment had continued to grow according to the average growth rate between 2015 and February 2020.

The summary ABS Labour Force (seasonally adjusted) estimates for May 2021 are:

3. Employment in Australia is now above the February 2020 level by 130.2 thousand (1.0 per cent). However, some sectors are still languishing while others are rebounding strongly.

The following graph shows the month by month growth in full-time (blue columns), part-time (grey columns) and total employment (green line) for the 24 months to May 2021 using seasonally adjusted data. 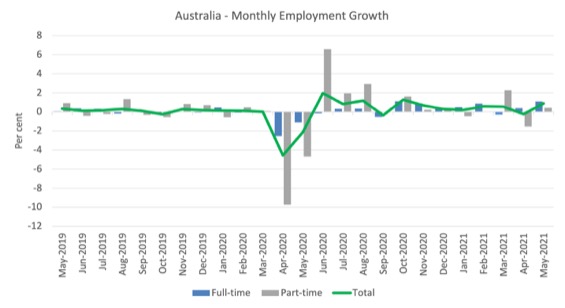 1. Total employment has risen by 251.1 thousand and 14.6 per cent of that increase has been in part-time work. 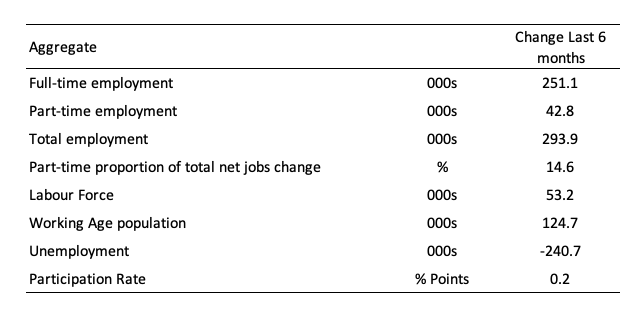 The following graph shows the Employment-to-Population ratio, since February 2008 (the low-point unemployment rate of the last cycle).

This is partly due to the slower population growth as a result of the lack of immigration due to the on-going external border closures.

This is forcing employers to search harder for workers already in Australia rather than discriminate against the unemployed. 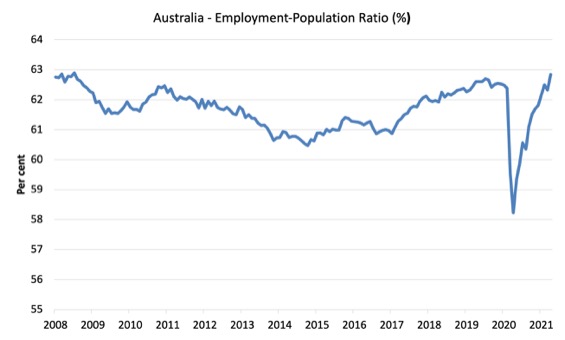 3. So far in 2021, the average monthly change is 51.2 thousand and you can see that from the graph that this is exceptional, although it has only been for 5 months so far as businesses return to more normal levels of operation. 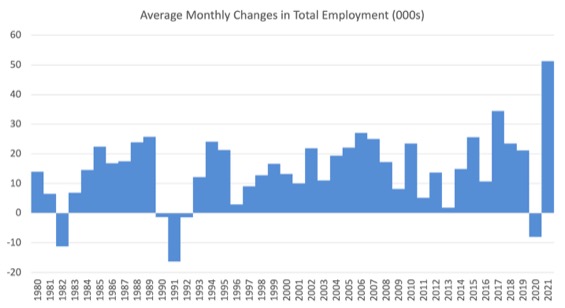 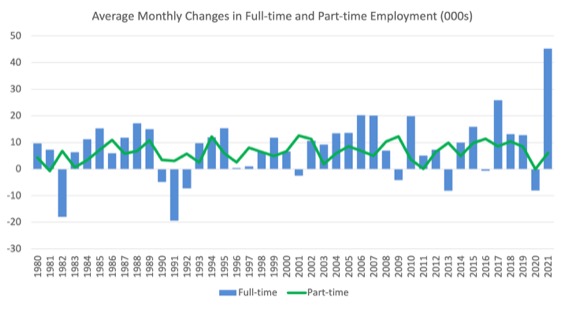 While the current month’s employment figures are encouraging, the labour market is still some way from catching up on the jobs that were lost during the pandemic.

The following graph shows total employment (blue line) and what employment would have been if it had continued to grow according to the average growth rate between 2015 and February 2020. 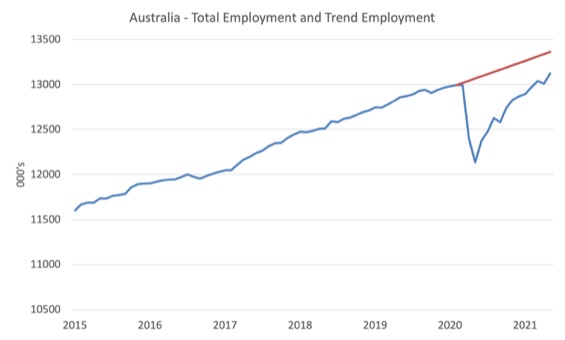 The following graph shows Australia’s working age population (Over 15 year olds) from January 2015 to May 2021.

With the external border closed, immigration has shrunk to virtually zero and the impact is very clear.

This flattening out has forced employers to work harder to get workers and is one of the reasons unemployment is falling quite quickly, given the circumstances. 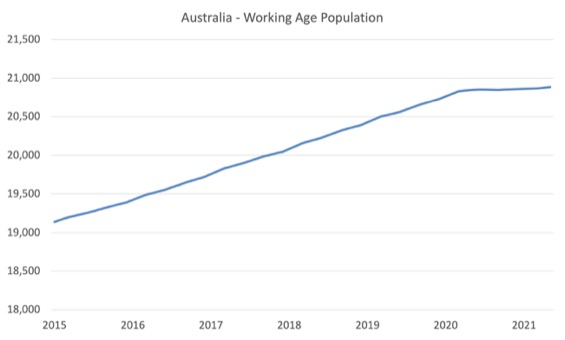 The dark linear line is a simple regression trend of the monthly change – which depicts slightly positive trend. 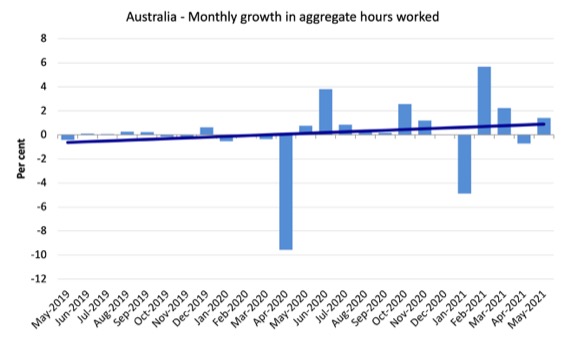 The official unemployment rate fell 0.4 points to 5.1 per cent as both employment and the participation rate increased.

That is a virtuous double.

The following graph shows the national unemployment rate from February 1980 to May 2021. The longer time-series helps frame some perspective to what is happening at present.

1. Unemployment is now back to the pre-pandemic February 2020 level – but we shouldn’t use that as the aspirational benchmark.

2. There is still considerable slack in the labour market that could be absorbed with further fiscal stimulus. 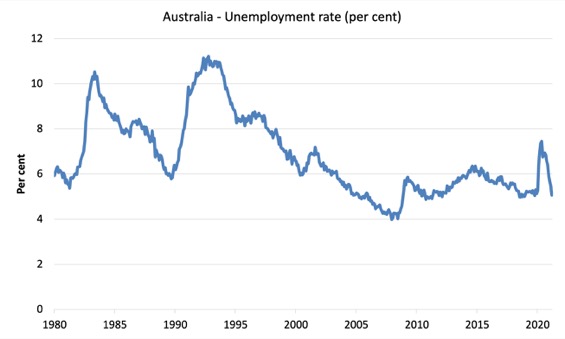 Broad labour underutilisation decreased by 0.7 points to 12.5 per cent in May 2021

The results for May 2021 are (seasonally adjusted):

2. Overall there are 1,028 thousand underemployed workers.

3. The total labour underutilisation rate (unemployment plus underemployment) decreased by 0.7 points to 12.5 per cent.

4. There were a total of 1,729.2 thousand workers either unemployed or underemployed.

5. This is lowest rate since February 2013 and once again illustrates what happens when immigration is reduced dramatically and employers have to rely on the locally-available workers.

The following graph plots the seasonally-adjusted underemployment rate in Australia from February 1980 to the May 2021 (blue line) and the broad underutilisation rate over the same period (green line). 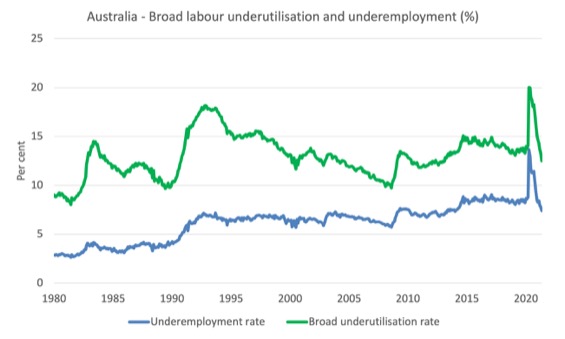 And the recovery is evident.

After 15 months, the unemployment had risen from 100 to: 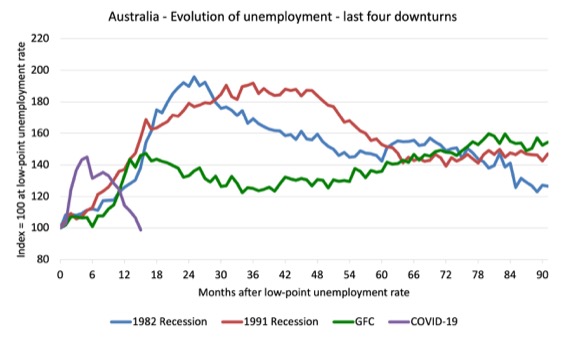 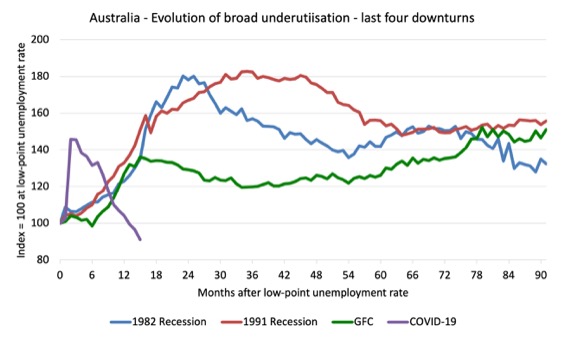 Teenage labour market improves in May 2021

3. The overall teenage employment-population ratio has fallen by 4.2 percentage points since February 2008, is now 2.4 points above its level in March 2020. It rose by 0.56 points over the month. 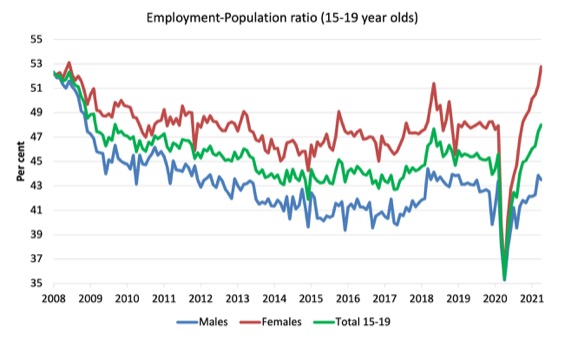 The May 2021 data reveals that the Australian labour market has regained its growth momentum with strong employment growth, increased working hours and participation and falling unemployment and underemployment.

Overall, one of the better monthly results.

1. Total employment is now above where it was in February 2020 but there are major sectoral differences – some sectors are still in deep recession while others are booming.

2. The results suggest that with lower population growth due to the external border closures, employers are now having to absorb the unemployed more quickly to mainstain their operations.

3. There is still plenty of scope for further fiscal support without triggering any inflationary pressures.

Bill Mitchell is a Professor in Economics and Director of the Centre of Full Employment and Equity (CofFEE), at the University of Newcastle, NSW, Australia. He is also a professional musician and plays guitar with the Melbourne Reggae-Dub band – Pressure Drop. The band was popular around the live music scene in Melbourne in the late 1970s and early 1980s. The band reformed in late 2010.
My articlesMy siteAbout meMy books
Follow on:Twitter
Previous Announcing the Instituto de Finanças Funcionais para o Desenvolvimento
Next The Weekend Quiz – June 19-20, 2021

Why Are Infrastructure Cost So High In The US?