by
Bill Mitchell
My articles My siteMy booksMy videosAbout me
Follow on:Twitter
Summary:
So Britain finally became free – sort of – from the European Union last week. I haven’t fully read the terms of the departure but the progress I have made so far in the text (several hundred pages) leads me to conclude that Britain has not gone completely free from the corporatist cabal that is the European Union. The agreement will see a Partnership Council established which locks Britain in to an on-going bureaucratic process dominated by technocrats – the sort of things the EU revels in and gets it nowhere. Overall, though, despite all the detail, Britain’s future policy settings will be guided by its polity and resolved within its own institutions. That means that the Labour Party has the chance to really push a progressive agenda. I doubt that it will but there are no excuses now.

run75441 writes Restore Medicaid to Its Former Self Quickly

So Britain finally became free – sort of – from the European Union last week. I haven’t fully read the terms of the departure but the progress I have made so far in the text (several hundred pages) leads me to conclude that Britain has not gone completely free from the corporatist cabal that is the European Union. The agreement will see a Partnership Council established which locks Britain in to an on-going bureaucratic process dominated by technocrats – the sort of things the EU revels in and gets it nowhere. Overall, though, despite all the detail, Britain’s future policy settings will be guided by its polity and resolved within its own institutions. That means that the Labour Party has the chance to really push a progressive agenda. I doubt that it will but there are no excuses now. Which brings me to look at some data which shows how the fiscal rules imposed by the European Union, particularly in the 19 Member States who surrendered their currencies, have constrained prosperity and worked against everything that citizens were told.

The relaxed Stability and Growth Pact

There are some progressive economists who claim that with the relaxation of the strict fiscal rules in the Eurozone coupled with the ECB’s massive PEPP program, there is little difference between being a formal currency issuer, like the US, Japan, or Australia and the 19 Member States of the EMU.

The data from the latest – IMF Fiscal Monitor – (published October 14, 2020) is revealing in this regard.

The first graph shows the Discretionary Fiscal Response to the COVID-19 Crisis in Selected Economies measured by the “Additional spending and foregone revenues”.

The second graph shows the fiscal response in terms of Equity, loans and guarantees – that is, so-called liquidity measures.

In general, the first class of stimulus measures are more direct and have higher multiplier effects than the liquidity measures.

I ranked the nations by size of stimulus and the smaller stimulus nations are predominantly Eurozone Member States (red bars). 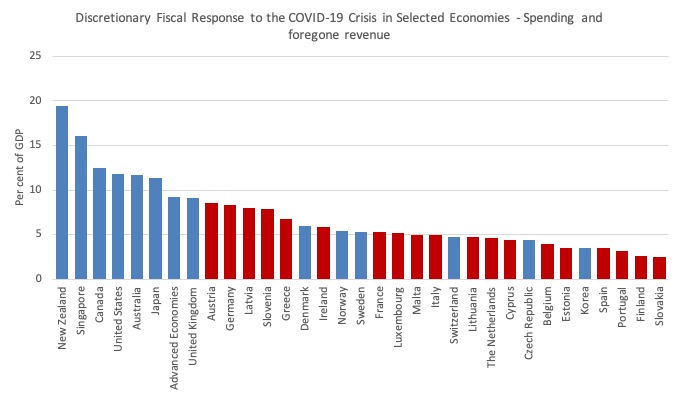 The second graph shows that the EMU Member States are more engaged in liquidity measures – which are usually highly conditional and have to be paid back when growth returns (or does not return).

Liquidity measures tend to constrain flexible policy choice, which is why the European Commission favours them. 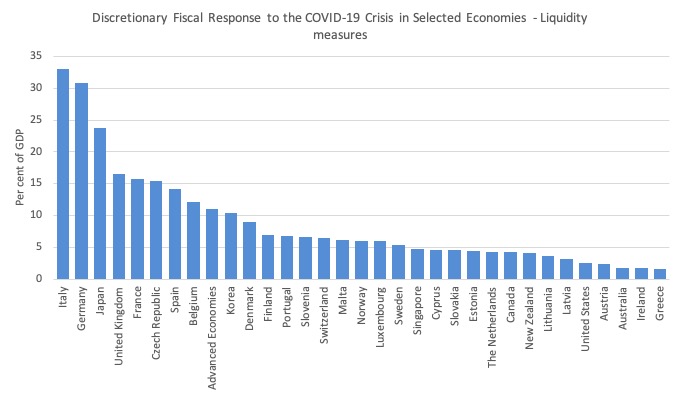 It could be argued that the stimulus need in the Eurozone was less than in the other nations shown in the first graph that injected considerable fiscal stimulus to support their nations through the pandemic.

Also remember that the fiscal outcome is endogenous and not controlled by the government’s discretionary choices.

Why? The final balance is partly determined by the level of activity (because tax revenue and welfare outlays are sensitive to activity). So nations that provided large fiscal support might have been responding to a massive collapse in output.

I am still working on the data at present and will report later on what I have found about the relationship between the additional spending and foregone revenue data and the real GDP growth.

But what appears to be the case is that while the Stability and Growth Pact rules have been temporarily relaxed, the Member States have not increased their deficits nearly as much as many other non-EMU nations, some of which appear in this IMF dataset.

I am guessing that the culture of austerity is now so embedded after twenty years of Eurozone membership that ambition has been quelled and governments are now prepared to oversee sub-standard outcomes.

The alternative hypothesis, which doesn’t necessarily contradict that conjecture, is that these nations know full well what will happen when Brussels decides to return to the Excess Deficit Mechanism and start demanding a renewed bout of austerity.

So, staying as close to the rules as possible eases future hardship.

Then consider the evidence

In February 2019, the Centres for European Policy Network (cep) published a report – 20 Years of the Euro: Winners and Losers: An empirical study – which created a controversy.

Because the results demonstrated how badly countries had fared as a result of their membership of the Economic and Monetary Union.

The question the study sought to answer was:

How high would the per-capita GDP of a specific eurozone country be if that country had not introduced the euro?

… to analyse which countries have gained from the euro and which ones have lost out.

The technique used by the cep-researchers is summarised as follows:

1. Create a ‘control’ group – with overtones to the authority that research in the physical sciences, which unlike social science, can conduct properly ‘controlled’ experiments.

This means “the actual trend in per-capita GDP of a eurozone country can be compared with the hypothetical trend assuming that this country had not introduced the euro (counterfactual scenario).”

The counterfactual is quantified by what happens in the ‘control group’:

… is generated by extrapolating the trend in per-capita GDP in other countries, which did not introduce the euro and which in previous years reported very similar economic trends to that of the eurozone country under consideration (control group).

2. The non-Eurozone nations that comprise the control group are then weighted – 0% to 100% – according to how each nation in the group “closely resembles the trend in per-capita GDP of the eurozone country before it introduced the euro.”

These weights are purely statistical and instrumental.

3. They create those statistical ‘fits’ for data between 1980 and 1996 (that is, before the convergence process started to kill growth in the Eurozone nations).

4. The highest weighted nations in the second part of the process (post Euro introduction) are those that match the growth trajectory of the Euro nations (pre-Euro).

5. A comparison is made post-euro between the growth predicted for the control group (according to the weightings) and the growth of each euro Member State, and the difference is attributed to the decision to join the EMU.

I have commented on this statistical technique previously in relation to British studies that tried to use it to say that Brexit would be disastrous.

You can learn about the technique from this page – Synth Package. I have worked with the software myself (R-version) and while it is rather speculative there are useful results that can be delivered as long as the ‘weightings’ are not distorted and recognising that exogenous factors (those not taken into account during the post-control period) could be influential.

My criticism of the use of this approach in the Brexit context was exactly because the researchers had ignored (probably deliberately) the conduct of fiscal policy (pre- and post-Referendum).

… how much higher or lower their per-capita GDP would have been, in 2017 … and overall … if they had not introduced the euro.

The results are summarised by the following Table:

They are self-explanatory and devastating.

In 2017, out of the examined eurozone countries, only Germany and the Netherlands gained from the euro. In Germany, GDP went up by € 280 billion and per-capita GDP by € 3,390. Italy lost out most. Without the euro, Italian GDP would have been higher by € 530 billion, which corresponds to € 8,756 per capita. In France, too, the euro has led to significant losses of prosperity of € 374 billion overall, which corresponds to € 5,570 per capita.

The situation will have worsened over the last three years since the dataset they used ended.

They also computed a cumulative gain/loss table “for the entire period since the year of introduction – 1999 in all countries except Greece, for Greece 2001 – until 2017.”

Definitely not a short-term phenomena.

Definitely entrenched in the institutional and legal structure of the monetary system.

On March 1, 2019, cep.eu put out a rather extraordinary press release – Statement on reactions to the study 20 years of euro – to address what it said was a “highly political environment”, which had led to the study receiving a “large number of reactions”.

They sought to clarify some points.

They were obviously attacked for providing evidence to show the EMU had failed and the logical inference was that nations should leave.

The organisation responded in this way:

The results of the study do not show that it would be better for a euro state to withdraw from the euro. On the contrary, those euro states that have not yet benefited from the euro must carry out reforms, particularly to increase competitiveness, in order to benefit from the euro. This was pointed out several times in the study. Withdrawing from the euro would entail unmanageable risks and would not therefore result in an improvement in prosperity for any of the countries as compared to the status quo. Reforms are therefore the only alternative.

Which I thought was an amazing demonstration of the Eurozone Groupthink that I highlighted my 2015 book – Eurozone Dystopia: Groupthink and Denial on a Grand Scale (published May 2015).

Well, if you read the report carefully they say things like:

2. “Italy has still not found a way of becoming competitive inside the eurozone. In the decades prior to introduction of the euro, Italy regularly devalued its currency for this purpose”.

In other words, cep.eu cannot conclude that nations will always be better off within the EMU as long as they introduce structural reforms.

All things that make PEOPLE worse off even if national income may or may not increase.

They redistribute whatever national income is produced increasingly towards to the top end of the distribution and away from the workers.

If a nation left the EMU and allowed its exchange rate to resolve productivity and cost differences, I believe it would be far better off than remaining in this neoliberal grinding system that so far has only destroyed prosperity for most of the Member States.

Britain has left the EU.

That means it has left an organisational structure that has neoliberal ideology embedded in the very legal foundations of the system.

It does not mean, clearly, that is has abandoned its own neoliberal leanings.

But now that ideology is operating at the political dimension rather than at the foundation of the monetary system.

That means, that a progressive Labour Party (or a reformed Tory Party) can move beyond this neoliberal period that has damaged prosperity and social cohesion to adopt much better policies towards sustainable growth, public infrastructure, public health and education and more.

It is no longer bound by a ‘legal’ neoliberalism. It is all at the political level now.

Sadly, the Labour Party doesn’t appear to be capable of taking up that challenge.

Bill Mitchell is a Professor in Economics and Director of the Centre of Full Employment and Equity (CofFEE), at the University of Newcastle, NSW, Australia. He is also a professional musician and plays guitar with the Melbourne Reggae-Dub band – Pressure Drop. The band was popular around the live music scene in Melbourne in the late 1970s and early 1980s. The band reformed in late 2010.
My articlesMy siteMy booksAbout me
Follow on:Twitter
Previous Bond investors see through central bank lies and expose the fallacies of mainstream macroeconomics
Next The Weekend Quiz – January 9-10, 2021