by
Bill Mitchell
My articles My siteAbout meMy booksMy videos
Follow on:Twitter
Summary:
When I studied British politics (as one unit in a politics minor) at university, I was bemused by the role of the House of Lords. I know it is a curiously British institution that would be hardly tolerated anywhere else. But the fact that it serves as a part of the British democratic system continues to amaze me. Recently, the Economic Affairs Committee has been investigating (if that is what they get up to) Quantitative Easing because, apparently, some of the peers were worried about the “operational independence” of the Bank of England and the “economic effects” (read: inflation fears) among other concerns. They published their first report last week (July 16, 2021) – 1st Report – Quantitative easing: a dangerous addiction? – and it is littered with errors. The government has until

When I studied British politics (as one unit in a politics minor) at university, I was bemused by the role of the House of Lords. I know it is a curiously British institution that would be hardly tolerated anywhere else. But the fact that it serves as a part of the British democratic system continues to amaze me. Recently, the Economic Affairs Committee has been investigating (if that is what they get up to) Quantitative Easing because, apparently, some of the peers were worried about the “operational independence” of the Bank of England and the “economic effects” (read: inflation fears) among other concerns. They published their first report last week (July 16, 2021) – 1st Report – Quantitative easing: a dangerous addiction? – and it is littered with errors. The government has until September 16, 2021. The reply does not have to be long – they could just submit this blog post and get on doing things that matter, although the Tories are currently finding it hard to get their head around that essential task at the moment.

Introduction – to set the scene

Former Bank of England governor Mervyn King is a member.

The chair of the Committee is “The Rt Hon. the Lord Forsyth of Drumlean” who just happens to be the chairman of a private bank and works in the financial sector – who are running the inflation scaremongering because they want interest rates to rise so that can gouge out higher profits –

In 1980, Mr Forsyth published an Adam Smith Institute paper entitled “Reservicing Britain” where he advocated that all public services should be privatised and allow competition to determine the supplier.

When he was a member of the Westminster City Council (dates), he wrote that it was “a devastatingly tedious, frustrating and boring experience trying to make cuts” to essential local government services.

Oh, the poor boy, better off doing other things, eh what?

He said that with all that travail, he then had to (Source):

… meet demonstrators outside council chambers who attack you for being savage, unthinking and unfeeling …

He accused his fellow councilors of being unable to make the necessary cuts because they were scared to take a “difficult decision” and always had “the ratepayer to turn to, whose purse can be raided for rates and taxes”.

He wanted harder cuts then.

In his statement to the press upon the releast of the QE Report last week, he said:

The Bank of England has become addicted to quantitative easing. It appears to be its answer to all the country’s economic problems and by the end of 2021, the Bank will own an eye-watering £875bn of Government bonds and £20bn in corporate bonds …

The Bank needs to explain how it will curb inflation …

QE is a serious danger to the long-term health of the public finances.

Wake me up when its over!

The Bank of England’s – Quantative Easing – page tells us that QE is all about keeping prices “low and stable”.

They maintain the orthodoxy that adjusting the interest “affects the amount of spending in the economy and so helps inflation to either fall or rise”.

But history tells us that total spending is very sticky when it comes to interest rate changes and the relationship with the inflation rate is undiscernable.

The following graph shows the monthly change in the Bank of England Bank Rate (its policy interest rate) and the change in the annual inflation rate from March 1989 to June 2021.

The dotted line is the simple linear regression (equation result shown) and the simple correlation coefficient between the two series is -0.03.

The short conclusion is that there is no relationship, although a pedant might conclude there is a very weak negative relationship.

The Bank would need very large interest rate changes to shift the inflation rate according to this data.

Of course, using simple cross plots to discern complex time series relationships is not recommended, although for an experienced econometrician (such as yours truly), they do tell us whether there is hope in some conjecture or another.

But I would have to really work hard in a complex time series econometric model (with lots of spurious lags, etc) to get any sort of statistically significant relationship here. 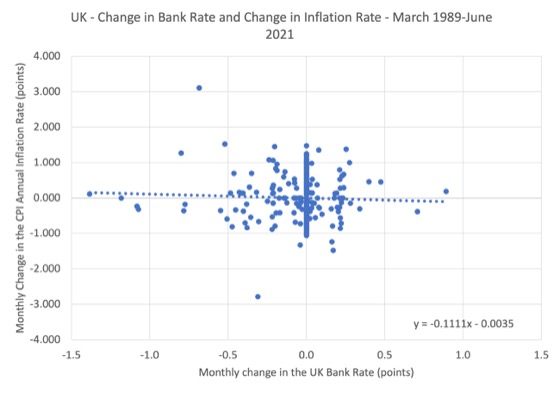 They also tell us “how much quantitative easing” they have done.

The QE program began in November 2009 at the height of the GFC and by November 2020, they had bought £895 billion worth of bonds.

Here is the history of the Bank’s QE program since November 2009. 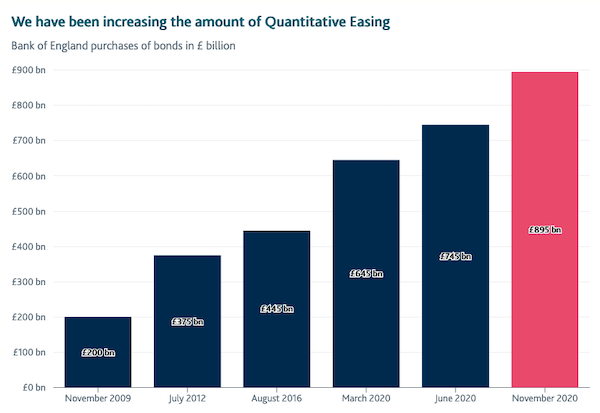 Between March 2020 and November 2020 (the last intervention), the Bank of England has purchased £250 billion worth of bonds.

So the Bank of England has purchased a fair proportion of the change in outstanding government debt.

The Bank poses the question: Does quantitative easing help to pay for government spending?

Their answer is effectively yes, but they have to say:

But that’s not why we do QE. We do it to keep inflation low and stable and support the economy.

Okay, but the House of Lords thinks otherwise as I do.

The House of Lords Report

The House of Lords Inquiry began on January 27, 2021, when the Economic Affairs Committee issued their – Call for Evidence.

They have recently issued:

2. Bank of England must spell out the risks of quantitative easing, says Lords report – a press release accompanying the Report (July 16, 2021).

You get the same message reading both.

But you might also be interested in reading some of the submissions to the examination which you can find – HERE.

The Key Findings of the Committee were interesting.

First, unlike the smokescreen that the Bank of England presented on its QE page (noted above), the Committee found that it:

… is widely perceived to be using QE to finance the Government’s deficit during the COVID-19 pandemic. The Bank’s bond purchases were aligned closely with the speed of issuance by HM Treasury.

The perceptions are accurate.

For an orthodox economist, this spells trouble as the Bank “could lose credibility, and this would harm its ability to control inflation and maintain financial stability”.

This is straight mainstream stuff.

And, not consistent with the historical evidence.

Why has the Bank of Japan, which has been engaging in this same practice for 20 odd years – and taken the interventions to levels far in excess of what the Bank of England has been doing, still retain credibility?

Why is inflation not out of control in Japan?

The point is that the course of inflation is not particularly sensitive to what the central bank does anyway – in the realm of normal practice, which includes the QE programs.

If the Bank was to hire the aircraft industry to drop billions of pounds onto the cities continuously and indefinitely then there might be some spending impacts that could drive demand beyond productive capacity.

But that is not remotely what the Bank is doing.

It (left pocket) is providing the pounds to the Treasury (right pocket) that the latter is injecting into the economy to save it from collapse during a once-in-a-century disaster.

Everyone knows that and inflationary expectations are not shifting much at all as a consequence.

Second, the Committee was fussed about the apparent lack of information about “the taxpayer liability to cover any financial losses suffered by the Bank as a result of QE”.

One of the submissions – from the Director of the National Institute of Economic and Social Research – raised the alarm about the possible insolvency of the Bank of England, which might mean “the MPC may be reluctant to raise rates”.

The causality conjectured was that the Asset Purchase Facility – the bond buying program – “is funded by reserves that are renumerated at Bank Rate”.

He then admits that “the Bank of England as it holds an indemnity from the HM Treasury as to any losses from APF operations”.

You know, the government effectively buying its own debt, paying the left pocket interest, then getting it back to the right pocket, and if the sums deviate, they indemnify themselves.

Apparently, all that is not clear enough to the Director and “We do now need a clearer statement from H M Treasury on this indemnity and how it would operate.”

He also said that if rates rose it would “limit fiscal space”, which is false unless you apply fiscal rules that have no bearing on the purpose of fiscal policy, which, fortunately, the British government is currently ignoring, much to the chagrin of the Director.

But the Lords Committee took this seriously and demanded the publication of the “Deed of Indemnity”.

As if it would matter if the Bank of England made losses on its asset holdings.

The Treasury would just instruct it to add some numbers to its accounts and someone would type them in.

Nothing functional would change.

Third, and most significant, the Committee concluded that QE:

… has had only limited impact on growth and aggregate demand over the last decade. Furthermore, there is little evidence to show that QE increased bank lending, investment, or that it had increased consumer spending by asset holders.

1. If they believe that inflation is about to accelerate because all those bank reserves will be spent or loaned out, which is the sort of causality they beleive in, then they should be relaxed that QE hasn’t impacted much at all.

2. They were looking in the wrong place – what has had an impact (negative then positive) on growth and aggregate demand over the last decade has been the fiscal policy initiatives – first, the ridiculous austerity imposed by George Osborne and then the recent support.

The inflation risk is contained in the fiscal policy not the monetary operation accompanying it.

That is where the mainstream miss out entirely.

And that risk is transitory at best as I have explained in recent weeks.

Is it over yet?

Wake me when we get to the end.

Bill Mitchell is a Professor in Economics and Director of the Centre of Full Employment and Equity (CofFEE), at the University of Newcastle, NSW, Australia. He is also a professional musician and plays guitar with the Melbourne Reggae-Dub band – Pressure Drop. The band was popular around the live music scene in Melbourne in the late 1970s and early 1980s. The band reformed in late 2010.
My articlesMy siteAbout meMy books
Follow on:Twitter
Previous Reading Beardsley Ruml carefully
Next Mobility data tells an interesting story about cultural differences between Australian states

The Problem With White Feminism | Opinion