by
Bill Mitchell
My articles My siteAbout meMy booksMy videos
Follow on:Twitter
Summary:
It’s Wednesday, and I have been following the British Labour Party conference and it seems they are conducting business as usual. That is, working out new and old ways to keep themselves unelectable even when the Tories are one of the worst British governments in history I would think. But so it goes. A split is the only way forward I guess. The Blairites can then hold conferences, stack votes to have unelectable leaders and design fiscal rules to their hearts content. At least they will be saving me time this time around. I will just be able to cut and paste my previous critiques of John McDonnells’ neoliberal Fiscal Credibility Rule and apply the analysis to the new Rachel Reeves’ rules. Not much has changed. Who is giving this lot advice? After that, I am sure you will appreciate that

Bill Mitchell writes When wages go up, we all benefit – what Starmer should have said

When wages go up, we all benefit – what Starmer should have said

It’s Wednesday, and I have been following the British Labour Party conference and it seems they are conducting business as usual. That is, working out new and old ways to keep themselves unelectable even when the Tories are one of the worst British governments in history I would think. But so it goes. A split is the only way forward I guess. The Blairites can then hold conferences, stack votes to have unelectable leaders and design fiscal rules to their hearts content. At least they will be saving me time this time around. I will just be able to cut and paste my previous critiques of John McDonnells’ neoliberal Fiscal Credibility Rule and apply the analysis to the new Rachel Reeves’ rules. Not much has changed. Who is giving this lot advice? After that, I am sure you will appreciate that the IMF is now considered to be past its use-by date and currently mired in a data-fudging scandal. And then some Rock Steady to calm us down. That’s what today’s blog post offers.

I always find this time of the year entertaining (footy finals, etc) because it is conference time for the British Labour Party and this year’s event is proving to be hilarious.

The grip that identity politics has on the Party was brought to the fore this week when one of the MPs (Duffield) got involved in a Twitter rage over a statement that “only women have a cervix”.

The right-wing press saw the issue as music to its ears and the debate set elements on the progressive side into conniptions about transphobia.

The complexity was lost but then the Labour leader and the Shadow Chancellor were skewered by the media and it is clear their own performances were rather wan to say the least – and at odds with each other.

Then the shadow employment minister resigned because he was told not to advocate a £15-an-hour minimum wage pledge despite the Leader previously seeking plaudits for that policy while seeking the leadership.

The minister claimed Labour was “more divided than ever and the pledges you made to the membership are not being honoured.”

Not a good start to the Conference.

Then the Shadow Chancellor adopted the time-honoured tradition in Labour of walking the plank when she started down the ‘credibility’ route with the announcement of her fiscal rules and new office to save money.

The conservative press called it “oxymoronic” that the Party would propose “a new watchdog aimed at keeping an eye on unnecessary spending of taxpayer money… funded with taxpayer money” (Source).

While one could contest the oxymoronic claim, the claim by the Express journalist was certainly moronic.

The new office will not be ‘funded’ with taxpayer money. It will be resourced with government fiat currency as all spending in the UK is.

The real oxymoronic status is that it is designed to stop ‘wasteful’ spending but its very existence will be superfluous, and by definition, wasteful.

Both are reflections of an erroneous understanding of the fiscal capacities of the British government.

Reeves told the Labour Conference that:

It’s thanks to the OBR that we know the Tories have missed everyone of their debt and deficit targets.

Which tells us the sort of nonsense that Labour is infested with.

Maybe the smart question she could have raised was along the lines of whether the original targets were sensible given the spending and saving decisions of the non-government sector and whether missing the targets was the vehicle to a better outcome in terms of employment and income generation than would have been the case had the targets been met.

Just getting up at a Conference and shouting about debt and deficits as if both are to be avoided is really poor conduct and typifies that the Labour Party hasn’t learned any lessons from its recent failures.

Apparently, this sort of nonsense makes Reeves “credible” with the “financial institutions and large sections of the media” (Source).

We got fiscal rules where a Labour government would enforce the balancing of the recurrent fiscal position (net of capital spending), require ‘tax’ revenue to match daily public spending, and reduce the debt ratio.

The Tories said they would do the same.

So John McDonnell’s ridiculous Fiscal Credibility Rule has been tightened under Starmer and Reeves, but it will be equally unworkable.

The Labour Party cannot get beyond their obsession that somehow amorphous financial market speculators will ruin the currency unless the government appeases them with these stupid (neoliberal) fiscal rules.

Given the Bank of England has bought a fair proportion of all the new debt issued over the last few years without the sky falling in, when will the Labour Party realise that the investors are at the behest of the government not the other way round?

The legislative power is much larger than the ‘market’ power.

Iceland, for example, showed during the GFC just how constrained the big hedge funds are when the government legislates to advance public interest.

The Tories should be very confident going into the next general election.

Things too stupid to even think about

1. The perennial US debt ceiling fiasco.

2. The calls for a trillion dollar coin in response to the stupid Republican antics about 1.

3. Rachel Reeves proposing an Office for Value of Money to appease the City.

4. Keir Starmer thinking he should be leader of the British Labour Party.

IMF has outlived its usefulness

Which implies it was useful at all – and one could argue that under the Bretton Woods scheme it served some utility in helping nations defend their exchange rates when their current account positions created instability.

And that would be before they started to introduce stupic and damaging conditionality to the loans they provided (late 1960s into the 1970s).

But once the fixed exchange rate system ended (after August 1971, although it didn’t really end until a few years later when the Smithsonian Agreement collapsed), the IMF had no further purpose.

It invented one – to be a neoliberal attack dog in tandem with the World Bank and inflict shocking damage to the poorest countries. It also allowed itself to be a pawn for advanced nations to depoliticise austerity attacks – circa Britain in 1976, for example.

Well I have been arguing all this for years now.

And like all things that are outside the box, at some point they become the fashion.

The IMF has an identity crisis. Its traditional role as lender of last resort has been usurped by the central banks that have pumped trillions into financial markets …

For most rich and middle-income countries, the IMF had already long lost its importance — thanks, in part, to the quantitative easing programmes in place since the 2008 financial crisis. Why sign up to IMF loans with stiff conditions when investors starved of yield are eager to lend just as much, almost as cheaply, with no strings attached?

The article quotes Carmen Reinhart, yes, she of the spreadsheet scandal, who still thinks she is relevant to anything.

Apparently governments who have borrowed from the IMF will face a “solvency issue”.

She has been banging on about solvency crises for just about ever.

And, the IMF boss has been accused of manipulating (or demanding manipulating) of data that changed China’s rankings in an index, while at the same time seeking funds from China. This is when she was at the World Bank.

There is denial about this but the investigative report documents some pretty weird going-ons.

Here is the Report (September 15, 2021) – Investigation of Data Irregularities in Doing Business 2018 and Doing Buiness 2020 – that has fed the allegations.

There seems to be evidence of bullying, Groupthink, and basic crookedness if the external report provided to the World Bank board is credible.

What would one expect from these institutions that really should have been disbanded and replaced decades ago given the damage they have inflicted on nations around the world.

This is what I have been listening to while working this morning.

It was on the 1965 release – The Wailing Wailers – accompanied by The Soul Brothers. It was marketed as “Jamaica’s Top-rated Singing Sensations”.

The Wailers were of course:

The Soul Brothers who were the Studio One house band and featured on many of the 1960s rock steady/ska/reggae recordings were mainly jazz players trying to earn extra cash.

They were originally the Skatalites (Roland Alphonso, Don Drummond, Tommy McCook, Jackie Mittoo, Lester Sterling, and Lloyd Brevett) but became the Sound Dimension in 1965 when trombonist Don Drummond went to prison for murdering his wife. Other musicians also joined the ‘group’.

The tremelo on the guitar is beautiful. A true rock steady classic.

Here is the original album cover, which I picked up at a second-hand shop in Melbourne in the 1970s to my great benefit. 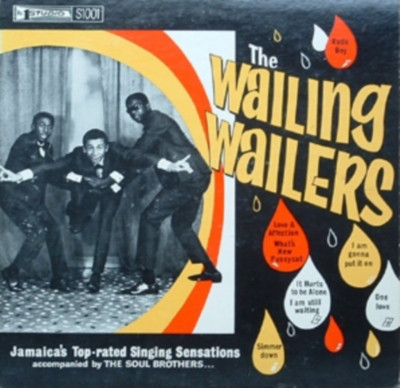 Bill Mitchell is a Professor in Economics and Director of the Centre of Full Employment and Equity (CofFEE), at the University of Newcastle, NSW, Australia. He is also a professional musician and plays guitar with the Melbourne Reggae-Dub band – Pressure Drop. The band was popular around the live music scene in Melbourne in the late 1970s and early 1980s. The band reformed in late 2010.
My articlesMy siteAbout meMy books
Follow on:Twitter
Previous Marx and MMT – Part 1
Next (Modern) Marx and MMT – Part 2