The central banks don’t seem to be worrying about inflation

by
Bill Mitchell
My articles My siteAbout meMy booksMy videos
Follow on:Twitter
Summary:
It’s Wednesday and I have been tied up most of the day with commitments. So we will have to be content today with a couple of snippets. The first about the on-going inflation mania and the way in which the ECB seems oblivious to it. The second about the gross incompetence of the Australia government, who has put the health of the nation at risk and forced state governments to invoke rolling lockdowns as only a small number of us are vaccinated and cases keep seeping out of a flawed quarantine system (the latter being the federal responsibility). And once the anger subsides from that little discussion, we have the usual Wednesday music offering to restore peace. Inflation mania continues The Bank of International Settlements is now whipping up the inflation narrative. On June 29, 2021, the

Bill Mitchell writes Australian government issues debt, buys most of it itself, and then pays itself interest into the bargain

It’s Wednesday and I have been tied up most of the day with commitments. So we will have to be content today with a couple of snippets. The first about the on-going inflation mania and the way in which the ECB seems oblivious to it. The second about the gross incompetence of the Australia government, who has put the health of the nation at risk and forced state governments to invoke rolling lockdowns as only a small number of us are vaccinated and cases keep seeping out of a flawed quarantine system (the latter being the federal responsibility). And once the anger subsides from that little discussion, we have the usual Wednesday music offering to restore peace.

The Bank of International Settlements is now whipping up the inflation narrative.

… the outlook for inflation is one of the big questions keeping financial markets on tenterhooks. Inflation has already increased in a number of EMEs: higher commodity and food prices alongside currency depreciations have given it a push. Moreover, the supply of many intermediate goods is failing to keep up with demand, generating bottlenecks. But the real question is whether the significant rise in inflation already seen in the United States – where it has recently substantially exceeded the target – will be temporary or longer-lasting.

The answer is that the recent rise in prices in the US will be temporary but the BIS thinks that the “plausible scenario” is that:

… inflation proves stronger than expected and financial market conditions tighten, and one in which the global recovery falters and the economy fails to recover.

So they are predicting that central banks will have to increase interest rates because household spending will suddenly go into reverse (saving rates will fall) and fiscal policy will push aggregate spending beyond sustainable rates of growth.

They admit that all the forces that bear on inflation at present are really in favour of “holding inflation down” but then they have to keep their faith by claiming that “non-linearities cannot be ruled out.”

That last claim is just a fancy way of saying they haven’t any reason to believe there will be a sustained outbreak of inflation but something might happen to generate it.

They also think that “even if any increase in inflation ultimately proves temporary, financial market participants could overreact, anticipating more sustained inflation.”

Not much in fact.

The BIS think that it will push up government bond yields and make it more expensive for governments to fund spending (in their terms).

Of course, the financial markets can do what they want but the central banks are always able to thwart any negative consequences of these shifts in sentiment.

And the ECB, for example, clearly doesn’t seem to have bought the inflation danger narrative.

Despite all the inflation hawks claiming that the ECB will have to dramatically scale back its – Pandemic emergency purchase programme (PEPP) – and – its other – Asset purchases programmes – the latest data shows the ECB has actually started to ramp up its government bond purchases in recent months.

Here is the history of the PEPP which began in March 2020.

The ECB now holds 1,104,465 million euro worth of assets as a result of this program alone. Most of them are public sector securities.

So far from worrying about all the inflation mania, the ECB is steaming full speed ahead funding the 19 Member State deficits and keeping them solvent.

The objective – to ensure the eurozone doesn’t break up.

Reality: breaking the Treaty but then without this massive bond-buying program the common currency would be dead. 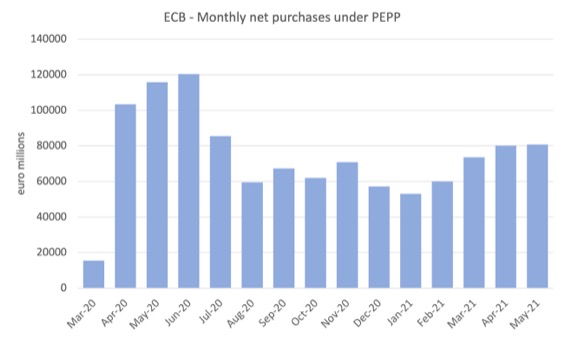 I think the lesson is not to listen to the political statements from peak bodies (such as the BIS) but to watch what the practitioners are doing.

There are not many things are national government can do worse than endanger the health of the entire population.

Yet that is what the Australian federal government has done as a result of its flawed decision-making, doing favours for its mates, and
obviously worrying about the fiscal implications of some spending options.

First, Australia is now in lockdown again as a result of a new outbreak of Covid that originated in Sydney as a breach of quarantine.

It has spread quickly because the conservative State government in NSW refused to lockdown quickly enough.

It has been playing a game of chicken with the virus since March last year because it has been scoring political points against Labor state governments which have adopted the snap lockdown.

It has been sickening listening to the NSW Premier bang on about her gold standard approach and their world leading contact and trace system.

Well all their hubris caught up with them last week when the outbreak this laxity caused has worsened and spread to other states.

Sydney is now in lockdown again – so much for their gold standard system which the Premier claimed allowed them to ‘stay open’ when other states were closed for business.

Second, last year, several states begged the Commonwealth government to build dedicated quarantine facilities out of the capital cities to ensure that return travellers etc would not infect the whole community.

The Government claimed that the hotel quarantine system was foolproof – 99 per cent effectiveness.

But, of course, any breach is devastating and there have been many due to the inadequacy of the hotel system (they were not designed to be infection proof) and the refusal of the Federal government to invest appropriately in dedicated facilities.

Saying 99 per cent safeguard is good enough as our Prime Minister was often heard to claim is like saying 1 in every 100 plane flights will crash and that is good enough.

And, under our Constitution, quarantine arrangements are federal responsibilities and I cannot understand why the States, early in the crisis, agreed to manage this service on behalf of the federal government.

Anyway, it is a trainwreck and every time a case escapes out of quarantine, the rest of us go into lockdown.

Third, the lockdowns will continue indefinitely because the Federal government messed up the vaccination program.

It has been a total joke.

Hardly anyone in Australia is vaccinated fully because:

1. The Federal government put most of its eggs in the AZ basket and when they had the chance to diversify into Pfizer etc they demurred.

It means we relied on AZ.

2. Then AZ becomes problematic and many people refuse to accept it. The Government’s major health advisory body kept changing the age groups that should take AZ, progressively restricting the cohort to the over 60s.

Yet many in that cohort will not touch it.

3. The Government also then announces it will indemnify GPs who administer the AZ vaccine from damages claims if bad things happen to patients.

The message received by us just made the lack of take up worse.

4. Recognising the take-up was shockingly low, the Government then announced it had large Pfizer supplies coming in October.

Message: we all wait until then, which is what is happening.

5. In addition, instead of using the normal vaccination process (for flu, etc) – which means the Federal government buys the supply and distributes it to the States/Territories and their health systems then administer the vaccine, the Federal government this time decided to bypass the traditional distribution process and instead vest responsibility in private health companies, some of who provide generous donations to the Liberal Party (the majority party in the conservative government).

So public money goes into private hands and then goes into the Liberal Party. Nice earner.

Meanwhile, the system of distribution is a massive failure as was warned last year and the vaccination rates remain very low.

So the only two things the Federal government had to do with respect to the medical situation was build dedicated quarantine facilities and acquire a diversified vaccine portfolio (like other governments) and they have failed to do both.

We will continue to have lockdowns because hardly any of us are vaccinated and the Feds won’t invest in proper quarantine facilities.

Where is the opposition Labor Party? Worrying about the debt build up as a result of the larger fiscal deficits generated in the fight against the recession.

Nice country we have here.

As regular readers will know, I think – Peter Green – was one of the best all-time guitarists.

He had everything – tone, soul, timing, speed when needed, vision and all the rest of the undefinable characteristics of greatness.

In November 1968, Fleetwood Mac released one of his instrumentals – Albatross – which was inspired apparently by Santo and Johnny’s song – Sleep Walk.

It was a magnificent piece.

And if you are lucky enough to have the original single then you will know that on the B-side was Danny Kirwan’s first contribution to the band – Jigsaw Puzzle Blues.

Well, a more recent version of the song Albatross was recorded by London-based reggae guitarist – John Kpiaye – and appeared on his 1997 album Red, Gold and Blues, which is one of my favourites.

John Kpiaye has played guitar with poet – Linton Kwesi Johnson – and appears on many reggae albums produced in the UK.

This version of Albatross is different but great nonetheless.

The whole album that is comes off is worth listening to, regularly.

Bill Mitchell is a Professor in Economics and Director of the Centre of Full Employment and Equity (CofFEE), at the University of Newcastle, NSW, Australia. He is also a professional musician and plays guitar with the Melbourne Reggae-Dub band – Pressure Drop. The band was popular around the live music scene in Melbourne in the late 1970s and early 1980s. The band reformed in late 2010.
My articlesMy siteAbout meMy books
Follow on:Twitter
Previous Australia’s Covid recession has increased inequality – winners and losers
Next The working poor are still poor in Australia