by
Bill Mitchell
My articles My siteAbout meMy booksMy videos
Follow on:Twitter
Summary:
Yesterday (November 29, 2021), the Australian Bureau of Statistics released the latest – Business Indicators – for the September-quarter 2021. This dataset provides quarterly estimates of private sector sales, wages, profits and inventories. It provides a means of viewing exactly what has gone wrong with the Australian economy over the last two decades as successive governments have failed to prioritise general well-being, and, have instead, acted as agents of capital. There is a massive imbalance in the capacity of workers and profit-recipients to access national income that is produced by the workers. Profits have been booming while wages growth has been low for a long time now. And if you thought the booming profits would be siphoned into productive investment to lift productivity and

Bill Mitchell writes When wages go up, we all benefit – what Starmer should have said

Euro area inflation is not accelerating out of control

Yesterday (November 29, 2021), the Australian Bureau of Statistics released the latest – Business Indicators – for the September-quarter 2021. This dataset provides quarterly estimates of private sector sales, wages, profits and inventories. It provides a means of viewing exactly what has gone wrong with the Australian economy over the last two decades as successive governments have failed to prioritise general well-being, and, have instead, acted as agents of capital. There is a massive imbalance in the capacity of workers and profit-recipients to access national income that is produced by the workers. Profits have been booming while wages growth has been low for a long time now. And if you thought the booming profits would be siphoned into productive investment to lift productivity and create the non-inflationary space for real wage increases, then you would be wrong. The massive lift in profits has gone into unjustifiable increases in executive pay, property booms and financial market speculation. None of the things that help lift national prosperity and well-being.

Here is a graph that shows the dramatic imbalance that has occurred in this neoliberal era.

It is a graph that would be replicated more or less across the advanced economies. 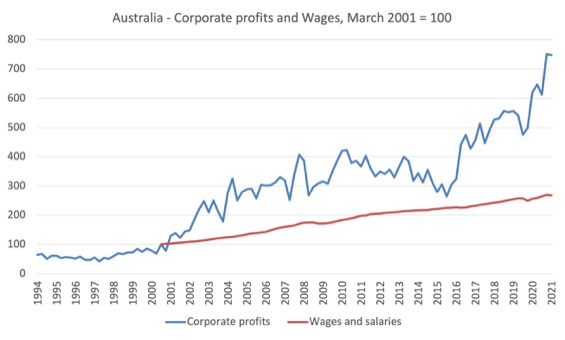 The ABS note in their data release that:

… estimates of Company Gross Operating Profits have once again included the receipt of COVID-19 related government subsidies as income in the compilation of CGOP, as previously seen from the June quarter 2020 onwards. These government subsidies include stimulus packages provided by both state and federal levels of government.

I know this will fuel the so-called Marxists to argue that fiscal deficits are bad because they underpin corporate profits, which is rather definitional if we are talking about capitalism.

The question that has to be answered though is whether the trajectory shown is reasonable in distributional terms or not rather than whether fiscal policy just lines the pockets of the capitalists.

The point is that fiscal policy per se boosts spending and employment.

But the design of that spending and the accompanying policies will influence the shares in national income.

For example, a public sector job creation program targetted at lower-income workers who are unemployed will boost wages more than profits.

The next graph adjusts for inflation over the period since the March-quarter 2001.

In real terms, corporate profits has risen by 4.6 times, while wages and salaries have risen by 1.65 times. 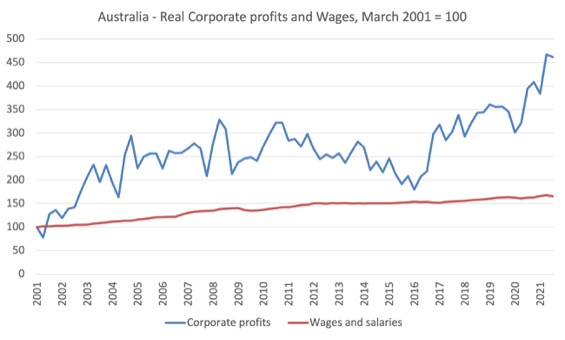 What assessment criteria of generalised well-being would consider those outcomes to be acceptable?

Only those who think the production and distribution system is to feed the top-end-of-town based on work generated by the vast majority who get the scraps.

When these distributional shifts started occurring in the 1980s, we were told that workers had gained to greater share of national income and that the real wage overhang (the excessive wage share in normal language) had to be reversed.

To encourage businesses to investment more in plant, equipment, buildings and knowhow in order to boost productivity.

What did happen was that the wage share started to fall as you can see from the following graph. 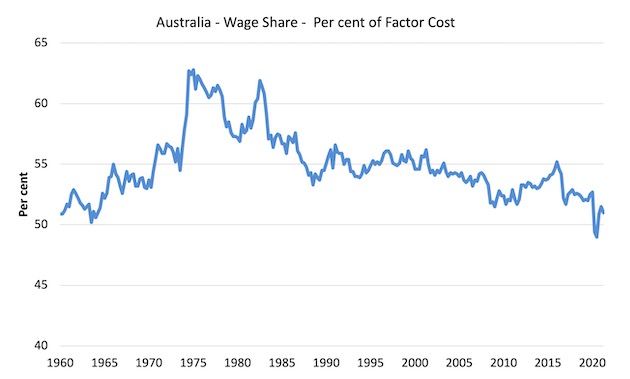 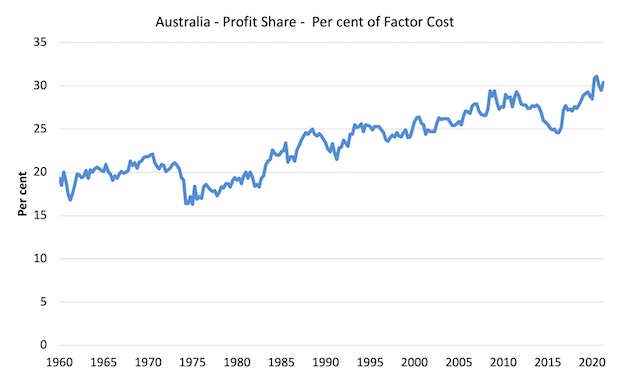 And what happened to private business investment?

The following graph shows various sectoral breakdowns of total business investment in Australia since the September-quarter 1987 (when this consistent dataset began).

Australia, of course, had a once-in-a-hundred-years mining boom which was driven by massive increases in demand for iron ore etc and record terms of trade.

The mining companies are heavily foreign-owned.

Once we exclude the mining investment, you can see that total investment expenditure fell as the wage share fell.

Further, total expenditure less mining has been essentially flat since the GFC.

And, investment in the manufacturing sector, which helps to drive productivity growth has been in decline for years and the boost to corporate profits hasn’t stimulated it. 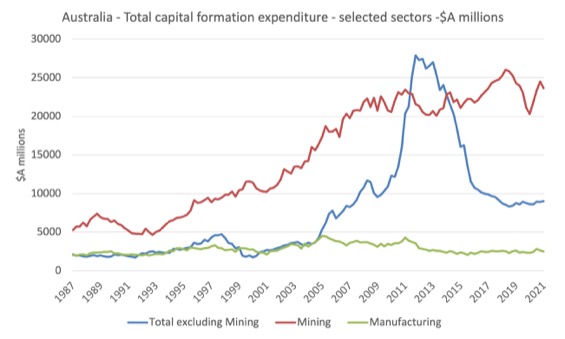 Another way of looking at the recent history is to see if there is any relationship between the movement in corporate profits and the business investment expenditure as a percent of GDP (the ‘investment ratio’).

The following graph shows the relationship from the March-quarter 2001 to the June-quarter 2021 and splits the sample into three periods coinciding with the trajectory of corporate profits:

The dotted lines are simple linear trend regressions to give some summary of what was happening between these variables.

My usual note of caution: correlation is not causation. Cross plots do not prove anything. But they can stimulate useful hypotheses that can be examined with more sophisticated statistical tools (which take us beyond the scope of this blog but which I deploy in my academic work).

You can see that up until the third period as higher corporate profits, other things equal, were associated with higher capital investment ratios.

But this also includes the Mining boom impact. If we took Mining out then the situation would reverse and what I show next would be much worse.

After the March-quarter 2016 that relationship has changed and it is clear that the booming corporate profits are not going into productive investment at the same rate that they used to. 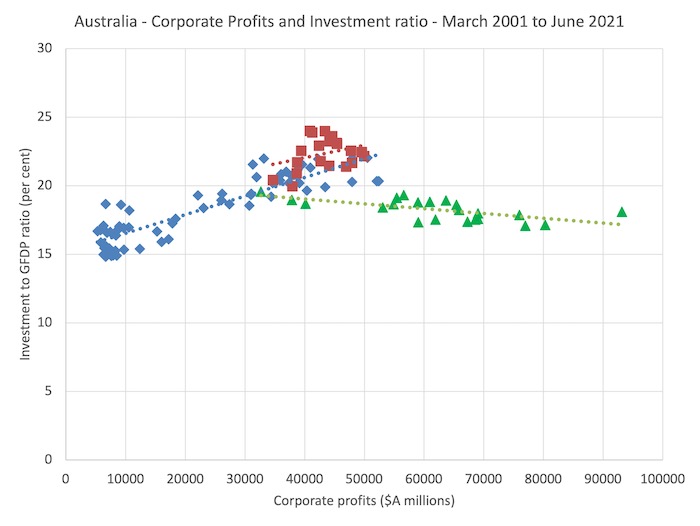 Where does the real income that the workers lose by being unable to gain real wages growth in line with productivity growth go?

We have already concluded it doesn’t go much private capital formation, which has not grown in proportion to the largesse that has been distributed away from workers to capital.

Some of has gone into paying these massive and obscene executive salaries that we are discussing in this blog.

I discussed that issue in these blog posts (among others):

2. CEO pay trends in Australia are unjustifiable on any reasonable grounds (August 28, 2017).

4. CEO pay still out of control and diverging again from workers’ earnings (December 21, 2015).

I saw in the Melbourne newspaper this morning this article – Rare untouched London trophy home selling for $65 million.

That is where the corporate profits boom goes, while workers struggle to secure basic housing as investment demand rises.

And some of the redistributed income that has resulted from this profits graph has been retained by firms and invested in financial markets fuelling the speculative bubbles around the world.

We need to return to national productivity wage distribution

When I returned from the UK in the mid-1980s where I was studying for my PhD, I worked briefly in Canberra in the Department of Employment and Industrial Relations. This was a fill-in while I waited to start work as a lecturer at Flinders University in Adelaide.

My job there was to present research evidence to support the wage indexation process and compile productivity measures to aid the wage setting tribunals in there annual productivity wage cases, where the tribunals would come up with an average, nationwide productivity growth estimate and pass that on in the form of nominal wage increases.

The employers hated it because it forced a more equal sharing of productivity growth.

Trying to resolve all those issues and more was my job for a short period. It was very interesting work and taught me a lot about data nuances etc.

But eventually the tribunal would make an award each year and wages would rise for everyone by the quantum set.

And so real wages could rise in line with productivity growth and the wage share could remain more or less constant.

That was considered equitable.

By the late 1970s, the productivity adjustments were being contested and in some years delayed.

As the Right-wing ideology became dominant in the policy debate and some notable industrial cases were engineered to confront the wage setting system, the government shifted to an decentralised enterprise-based wage setting system in the 1980s.

But while some of the old national system was retained – such as the annual mininum wage setting process – the national productivity awards were abandoned.

And never forget that it was the Australian Labor Party (Hawke-Keating) government that did this – attacking the rights of workers to gain a fair share of the output and income they created.

And that is when we started to see real wages growth diverge from productivity growth and the wage share started to tumble and the profit share in national income rise.

We need to return to that sort of framework – where workers can get their fair share.

I think I will go and assemble some Lego.

This story from the UK Guardian (November 30, 2021) – Lego gives its 20,000 employees three days extra holiday after profits rise 140% – at least shows one company that does something small for its workers when times are going well for it.

There is much more that needs to be done and relying on the ‘market’ to correct these massive imbalances is not one of them.

Governments have to introduce frameworks that ensure workers are paid more and share fairly in income growth.

Bill Mitchell is a Professor in Economics and Director of the Centre of Full Employment and Equity (CofFEE), at the University of Newcastle, NSW, Australia. He is also a professional musician and plays guitar with the Melbourne Reggae-Dub band – Pressure Drop. The band was popular around the live music scene in Melbourne in the late 1970s and early 1980s. The band reformed in late 2010.
My articlesMy siteAbout meMy books
Follow on:Twitter
Previous The same erroneous logic that created the social housing shortage is apparently the solution
Next Australian economy contracts and workers national income share declines further