by
Bill Mitchell
My articles My siteAbout meMy booksMy videos
Follow on:Twitter
Summary:
My Wednesday blog post with a few snippets. Don’t forget to enrol in our MOOC which begins next week. Also, some news from Britain that shows once again the British Labour Party has the gun aimed straight at its foot. And some comments on yesterday’s Australian government decision to increase the unemployment benefit by per week and claiming this was appropriate – when it still means the recipients are 3 per week below the accepted poverty line. Enforced poverty by a government that refuses to create enough jobs and then punishes the victims of the policy failure. This all amounts to War and we can sing along to that after getting angry about the rest. Modern Monetary Theory: Economics for the 21st Century – starting March 3, 2021 Don’t forget to enrol in the upcoming edX MOOC –

My Wednesday blog post with a few snippets. Don’t forget to enrol in our MOOC which begins next week. Also, some news from Britain that shows once again the British Labour Party has the gun aimed straight at its foot. And some comments on yesterday’s Australian government decision to increase the unemployment benefit by $25 per week and claiming this was appropriate – when it still means the recipients are $163 per week below the accepted poverty line. Enforced poverty by a government that refuses to create enough jobs and then punishes the victims of the policy failure. This all amounts to War and we can sing along to that after getting angry about the rest.

Don’t forget to enrol in the upcoming edX MOOC – Modern Monetary Theory: Economics for the 21st Century. The free course begins March 3, 2021 and over 4 weeks will provide an introduction to MMT.

The course is introductory and covers a wide range of issues.

We begin by improving the students’ economic literacy with terminology, concepts and language.

In Week 2 we get into history and the first steps in understanding MMT.

More detailed material emerges in Week 3, which helps us deal with policy questions in Week 4.

You will be required to spend around 3 hours per week on the material – videos, articles, discussions, quizzes, polls etc – to really gain from the course.

Skimming the material will likely lead to a less-than satisfactory outcome.

If all goes well, we will start building MMT201x which will offer a more complex, technical study course.

This marks the first venture for – MMTed – in partnership with the University of Newcastle.

From University of Newcastle: 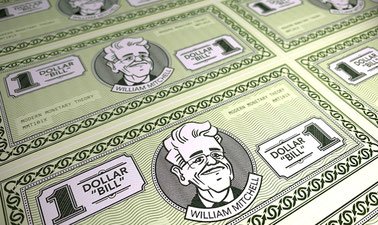 I last wrote about the plight of Australia’s unemployed in this blog post – Unemployed in Australia forced to live in abject poverty and the business sector thinks that is fine (February 4, 2021).

I won’t repeat the details because they are current.

All we do here is see what the latest piece of inhumanity from the Australian government does to the analysis.

Yesterday, the Government finally bowed to pressure from just about all angles and announced it would increase the single, adult unemployment benefit payment by $25 per week to $307 per week.

What does that mean?

The poverty line for a single adult is around $470.

So it means that despite the so-called “appropriate” increase (PM’s words) of $25, the gap between the unemployment benefit and the poverty line is still $163 per week.

And I see lots of progressives in the ‘industry’ – the ones who have decided to be co-opted by government and regularly have meetings with government and engage in well-catered for talkfests about the plight of the unemployed – were calling for around an $80 per week increase, which would still leave the unemployed in abject poverty. 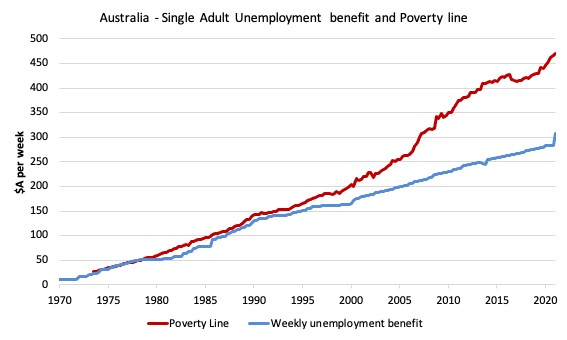 During the pandemic the government paid a temporary COVID-19 supplement to the unemployed which they have progressive cut and be replaced by the $25 increase at the end of March 2021.

The following graph take into account the temporary COVID-19 supplement as it impacted on single adult unemployed persons. It shows the data from the March-quarter 2019 in order to see the impact of the supplement more clearly.

You will note that for the first period of the Supplement the income support payment (green) moved above the poverty line (red).

But when that was cut in September to $A250 per fortnight the income support payment plus COVID-19 supplement once again pushed workers below the poverty line.

As of January 1, 2021, that situation has worsened even further and by the end of March 2021, workers will be back on the blue line. 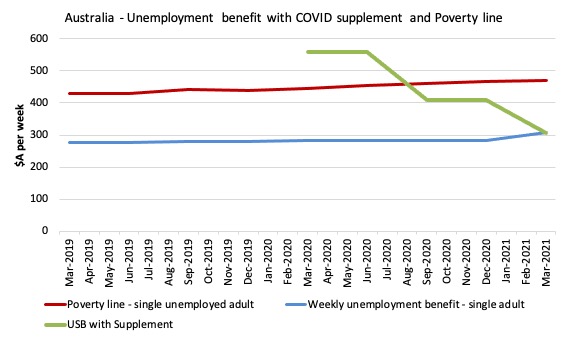 The Government also ‘toughened’ the activity tests – as in made the torture more extreme – and, among other things now require an unemployment recipient to apply for 20 jobs every month to remain on the penurious benefits provided.

At a time when the labour market is in deep crisis and more than 14 per cent of available labour cannot find enough work, trying to find 20 jobs to apply for each month is nigh on impossible.

So employers just get flooded with applications that have no hope of success yet the sociopaths in Government and its bureaucracy are content that the bastards are not idle.

Australia is a shameful place these days.

We should all hang our heads low for tolerating this.

British Labour proving that they still know how to go backwards

A few weeks ago, the British Opposition leader delivered what was described as a pathbreaking speech where among other things he unveiled his latest gee-whiz idea – Recovery Bonds.

The apparatchik came up with this idea should go into the halls of recommendations that make Labour unelectable – along with colleagues who gave Labour the Fiscal Credibility Rule.

All these ideas are cut from the same cloth.

The cloth of irrational fear of the power of global financial markets and tepid support for the framing and concepts of neoliberalism.

It isn’t a winner Keir, no matter how flash your business suits and silk ties are when you talk about this stuff.

You should be moving beyond the stifling and crippling government financial constraint narrative that always leads to questions of what tax or debt will be raised when government spending increases and thereby derails the actual narrative and reframes anything that might be progressive about the spending plans back into the ‘how can we afford it’ neoliberal, mainstream macroeconomics frame.

The Tories know how to do it.

Just spend up big and don’t mention the War (the how are we going pay for it!).

They have no insecurities about the City of London.

But Labour always scores own goals, which includes going down to the City and begging the greedy speculators that inhabit that part of London to accept the Party as a viable government that will deliver as much corporate welfare and as little general welfare as the ‘desk jockeys’ think is appropriate.

The latest move to establish – apparently – credibility – is the Recovery Bonds.

Apparently, some advisor or another has convinced the leadership that changing the name government debt to recovery bonds is a winner.

The cries of “how will you pay for it” won’t change.

The fears of tax hikes to ‘pay back all the debt, sorry, recovery bonds’ won’t change.

The ‘you’re burdening our grandkids’ cries will not change.

The Party should get real and use this period in oppposition, where they face one of the worst governments in British history, to educate the public and reframe the debate entirely.

And it isn’t as if the leadership is kicking too many goals.

The latest voting intentions see the Tories going further ahead as the Labour Party slip further.

The “highest lead since early September”, lockdowns, virus out of control, Brexit, and all.

The results from Politico are not that much different.

Go figure all you genius advisors and New Statesman commentators.

Webinar – MMT and the new social contract: Lessons from Covid-19 – Coming this Weekend!

I will be sharing the stage with my good friend Dr Pavlina Tcherneva and talking about how MMT economists talk about the social contract.

We will be considering the role of the Job Guarantee and lots of other things.

Go – HERE – for details about enrolment and participation.

Music – Now for the War

Regular readers will know that I am partial to reggae and dub music – and even started Australia’s first live reggae/dub band in the 1970s which is still going strong – Pressure Drop.

I always like Bob Marley’s music but moreso his early 1960s recordings as the – Wailers – rather than the later more Americanised, pop reggae.

But he was a genuine and pushed issues that we should all care about.

His song – War – was on his 1976 album – Rastaman Vibration – his 8th studio recording released.

This album really set him up in the US market because it was poppy and the consumers were probably more likely to ignore its political messages, which were anything but representative of popular US culture.

I didn’t like it much but two songs, War and Who the Cap Fits – were excellent.

Anyway, more recently a multi-talented American guitarist and singer – Molly Tuttle – recorded a version of the song while streaming a live concert at The Basement in Nashville.

She is a magnificent guitar player although in the Bluegrass and Country tradition (which is not to my liking).

She has recently been doing a series of cover songs across a range of musical forms that display her versality.

This version of War with just a bass and drums backing is as good as the original and I rarely conclude that with a cover song. There are no Bluegrass licks and the singing is full of soul and fury with no country twang.

This is not her usual band. She put together the powerhouse backing band especially for this concert (Annie Clements, bass; Megan Jane, drums). They do do a lot of work in Nashville. These two woman can really play as well.

And for you guitar afficianados – her Collings single pickup Eastside LC – is one great instrument with one of the best tones known to humankind. How about that?

Sing along – two chords and a riff – “War in the East, War in the West, War up North, War down South … And we know we shall win, as we are confident
In the victory, Of good over evil, Good over evil, yeah …”

Bill Mitchell is a Professor in Economics and Director of the Centre of Full Employment and Equity (CofFEE), at the University of Newcastle, NSW, Australia. He is also a professional musician and plays guitar with the Melbourne Reggae-Dub band – Pressure Drop. The band was popular around the live music scene in Melbourne in the late 1970s and early 1980s. The band reformed in late 2010.
My articlesMy siteAbout meMy books
Follow on:Twitter
Previous Have mainstream economists really embraced large deficits and central bank bond purchases?
Next Some historical thinking about the Job Guarantee

Jason Hickel — Is the world poor, or unjust?