by
Bill Mitchell
My articles My siteAbout meMy booksMy videos
Follow on:Twitter
Summary:
Last Friday (July 2, 2021), the US Bureau of Labor Statistics (BLS) released their latest labour market data – Employment Situation Summary – June 2021 – which showed that the recovery since the catastrophic labour market collapse in March and April 2020, continues with payroll employment rising by 850,000 in June 2021. The unemployment rate rose by 0.1 points to 5.9. However, the broader labour wastage captured by the BLS U6 measure fell by 0.4 points to 9.8 per cent. The US labour market is still 6,76 thousand jobs short from where it was at the end of February 2020, which helps to explain why there are no fundamental wage pressures emerging. The other notable point is that long-term unemployment now dominates among the duration categories published by the BLS. Overview for June 2021:

Last Friday (July 2, 2021), the US Bureau of Labor Statistics (BLS) released their latest labour market data – Employment Situation Summary – June 2021 – which showed that the recovery since the catastrophic labour market collapse in March and April 2020, continues with payroll employment rising by 850,000 in June 2021. The unemployment rate rose by 0.1 points to 5.9. However, the broader labour wastage captured by the BLS U6 measure fell by 0.4 points to 9.8 per cent. The US labour market is still 6,76 thousand jobs short from where it was at the end of February 2020, which helps to explain why there are no fundamental wage pressures emerging. The other notable point is that long-term unemployment now dominates among the duration categories published by the BLS.

For those who are confused about the difference between the payroll (establishment) data and the household survey data you should read this blog post – US labour market is in a deplorable state – where I explain the differences in detail.

So we are now operating in an environment of minimal uncertainty.

The BLS noted that:

The first graph shows the monthly change in payroll employment (in thousands, expressed as a 3-month moving average to take out the monthly noise). The gray lines are the annual averages.

The data swings are still large and dwarf the past history.

The US labour market is still 6,764 thousand jobs short from where it was at the end of February 2020 and the commentary from the BLS above tells us how this shortfall is distributed across the sectors. 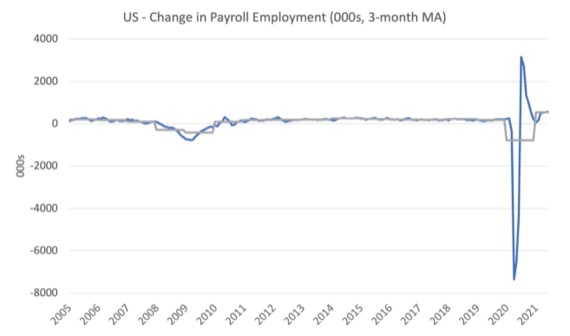 The next graph shows the same data in a different way – in this case the graph shows the average net monthly change in payroll employment (actual) for the calendar years from 2005 to 2021. 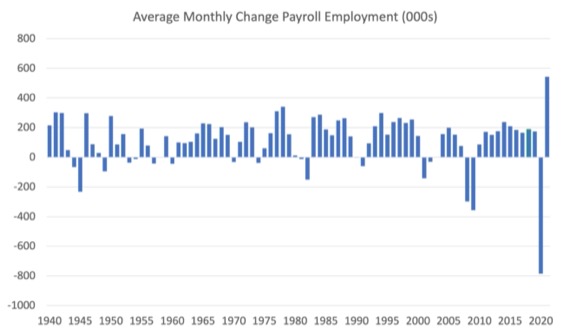 1. Employment as measured by the household survey fell by 18 thousand net (-0.01 per cent).

3. The participation rate was unchanged at 61.6 per cent.

4. As a result (in accounting terms), total measured unemployment rose by 168 thousand to 9,484 thousand and the unemployment rate fedged up 0.1 points to 5.9 per cent.

The BLS note that both unemployment measures:

Both the unemployment rate, at 5.9 percent, and the number of unemployed persons, at 9.5 million, were little changed in June. These measures are down considerably from their recent highs in April 2020 but remain well above their levels prior to the coronavirus (COVID-19) pandemic (3.5 percent and 5.7 million, respectively, in February 2020) …

The following graph shows the monthly employment growth since January 2008, which shows the massive disruption this sickness has caused. 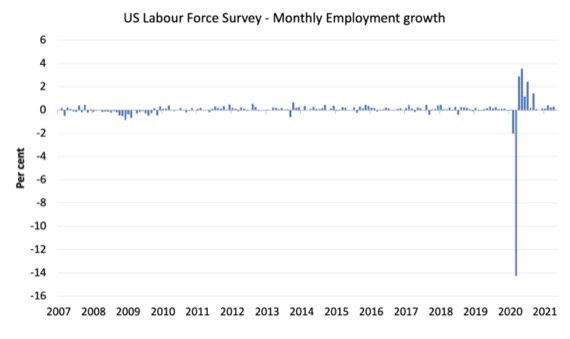 To put the recent period in perspective I took out the extreme observations (outliers) between March 2020 and October 2020 and repeated the graph. 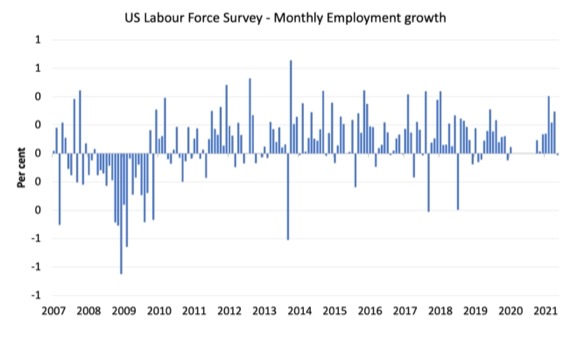 The Employment-Population ratio is a good measure of the strength of the labour market because the movements are relatively unambiguous because the denominator population is not particularly sensitive to the cycle (unlike the labour force).

The following graph shows the US Employment-Population from January 1950 to June 2021.

While the ratio fluctuates a little, the April 2020 ratio fell by 8.6 points to 51.3 per cent, which is the largest monthly fall since the sample began in January 1948. 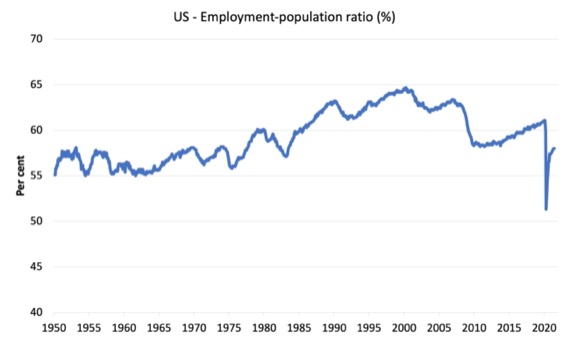 As a matter of history, the following graph shows employment indexes for the US (from US Bureau of Labor Statistics data) for the five NBER recessions since the mid-1970s and the current 2020-COVID crisis.

They are indexed at the employment peak in each case and we trace the data out for each episode until one month before the next peak.

So you get an idea of:

1. The amplitude (depth) of each cycle in employment terms.

2. The length of the cycle in months from peak-trough-peak.

The early 1980s recession was in two parts – a short downturn in 1981, which was followed by a second major downturn 12 months later in July 1982 which then endured.

1. Return to peak for the GFC was after 78 months.

2. The previous recessions have returned to the 100 index value after around 30 to 34 months.

3. Even at the end of the GFC cycle (146 months), total employment in the US had still only risen by 8.3 per cent (since December 2007), which is a very moderate growth path as is shown in the graph.

The COVID collapse was something else but the recent gains are evident, although the gains have been slowing relative to early in the recovery. The first graph shows the official unemployment rate since January 1994. 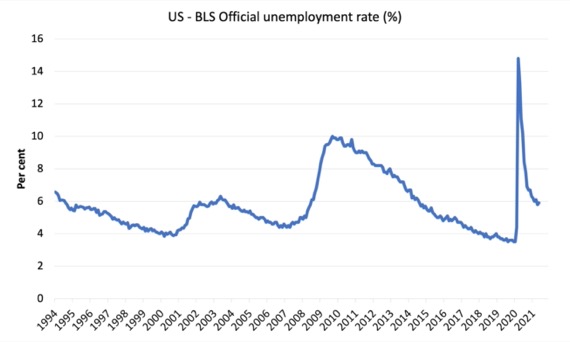 The official unemployment rate is a narrow measure of labour wastage, which means that a strict comparison with the 1960s, for example, in terms of how tight the labour market, has to take into account broader measures of labour underutilisation.

The next graph shows the BLS measure U6, which is defined as:

It is thus the broadest quantitative measure of labour underutilisation that the BLS publish.

The part-time for economic reasons cohort (the US indicator of underemployment) fell by 644 thousand (-12.2 per cent), a substantial reduction in the recent monthly changes in underemployment. 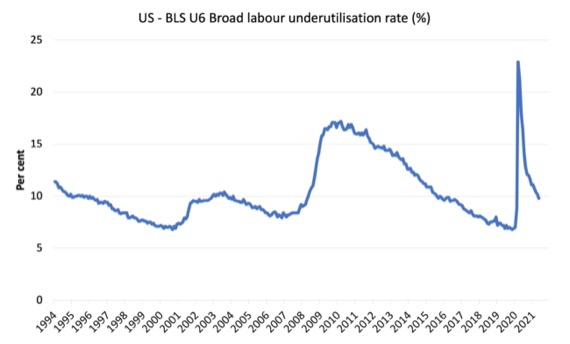 The BLS say that:

In June, the number of persons not in the labor force who currently want a job was 6.4 million, little changed over the month but up by 1.4 million since February 2020. These individuals were not counted as unemployed because they were not actively looking for work during the last 4 weeks or were unavailable to take a job …

Among those not in the labor force who currently want a job, the number of persons marginally attached to the labor force, at 1.8 million, changed little in June but is up by 393,000 since February 2020. These individuals wanted and were available for work and had looked for a job sometime in the prior 12 months but had not looked for work in the 4 weeks preceding the survey.

The next graph shows the evolution of unemployment rates for three cohorts based on educational attainment: (a) those with less than high school completion; (b) high school graduates; and (c) university graduates.

As usual, when there is a crisis, the least educated suffer disproportionately.

In the collapse in employment, the unemployment rates rose by:

The period since April 2020 has seen the unemployment rate fall by:

In the last month, the change in the unemployment rate has been: 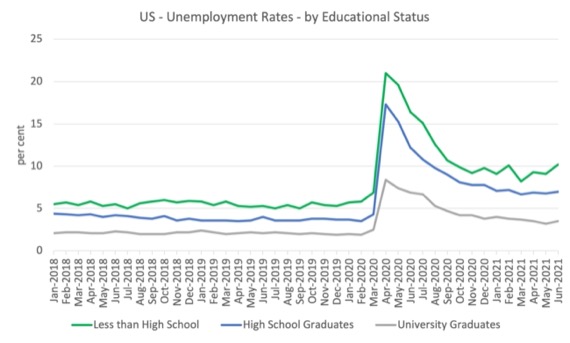 In the US context, the trends in trends in unemployment by ethnicity are interesting.

1. How have the Black and African American and White unemployment rate fared in the post-GFC period?

1. All the series move together as economic activity cycles. The data also moves around a lot on a monthly basis.

This graph allows us to see whether the relative position of the two cohorts has changed since the crisis.

While there is month-to-month variability, the data shows that, in fact, through to mid-2019, the position of Black and African Americans had improved in relative terms (to Whites), although that just reflected the fact that the White unemployment was so low that employers were forced to take on other ‘less preferred’ workers if they wanted to maintain growth.

In April 2019, the ratio was 2.1 (meaning the Black and African American unemployment rate was more than 2 times the White rate).

By April 2020, the ratio had fallen to its lowest level of 1.2, reflecting the improved relative Black and African American position. Special Topic: Wage movements in the US labour market

I have been working on detailing whether there is an inflation threat emerging in the US.

One of the ways of assessing whether the US economy is close to full employment is to examine the growth in wages, which tells us whether the supply-side of the labour market (workers) is enjoying gains in bargaining power.

The other indicator is the rate at which workers are quitting their jobs, which provides a signal of mobility and confidence among workers. The most recent data is not yet available.

The BLS reported that:

The following graph shows the annual hourly earnings growth for all private employees since March 2007.

The recent trend is downwards and dispels any notion that the US has reached the end of their expansionary capacity. 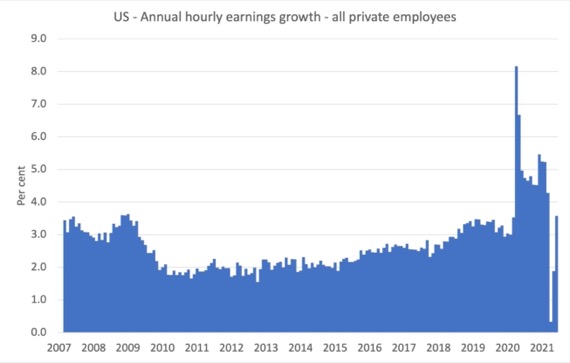 Noting that the above graph is in nominal terms.

So real hourly earnings growth is still lagging behind the annual productivity growth, which is another sign of labour market slack and weak bargaining power.

The following graph shows movements in real average hourly earnings (indexed at 100 the pre-GFC peak – November 2006) up to May 2021 (latest data).

The spike in the early period of the pandemic was the result of hours adjustments rather than earnings growth.

The series is now 4.6 points below the pre-pandemic levels.

It is hard to see major structural inflation pressures arising as a result of these movements. 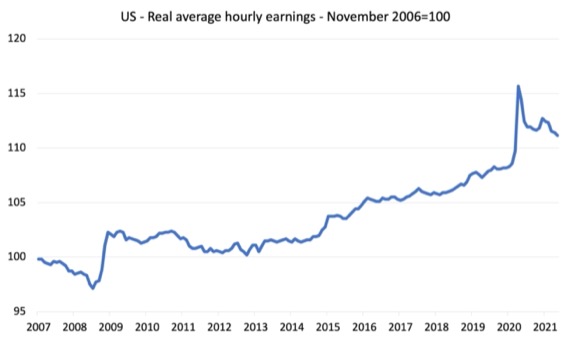 The Bureau of Labor Statistics defines long-term unemployment differently to most other national statistical agencies.

They use the 27 weeks or more threshold, whereas most other agencies use the more than a year benchmark.

The following graph shows the unemployment rate (green) and the proportion of long-term unemployed in total unemployment from January 1950 to June 2021.

While the definition is different, the behaviour of long-term unemployment is similar across nations.

The feature is the rising PLTU trend since the 1980s.

Even as the official unemployment rate has eventually returned to its pre-recession levels (right-hand axis in percent), the duration of the recovery has become longer, which means that the pool of unemployed ‘ages’ in duration and increasing numbers of people are in the long-term unemployment category..

This is one of the reasons that governments should try to short-circuit downturns to stop that effect. Remember that the PLTU lags the changes in actual unemployment.

Before the pandemic, the average duration of unemployment was 4.2 weeks (April 2021).

The average duration in June 2021 was 29.6 weeks, which means that on average each unemployed person is classified as long-term unemployment.

This indicates a very stagnant dynamic.

New entrants are getting the jobs and those who lost out early in the pandemic are becoming stuck.

I will do some more analysis of these flows in later posts as I understand the data trends better.

It is clear though that the US labour market is still 6,764 thousand jobs short from where it was at the end of February 2020.

There is no sign of any wage pressures accelerating.

Bill Mitchell is a Professor in Economics and Director of the Centre of Full Employment and Equity (CofFEE), at the University of Newcastle, NSW, Australia. He is also a professional musician and plays guitar with the Melbourne Reggae-Dub band – Pressure Drop. The band was popular around the live music scene in Melbourne in the late 1970s and early 1980s. The band reformed in late 2010.
My articlesMy siteAbout meMy books
Follow on:Twitter
Previous The Weekend Quiz – July 3-4, 2021 – answers and discussion
Next Staggered minimum wage increases in Australia further punish the most vulnerable workers

Dr Robert Martindale – Inflammation: Is the Gut the Driving Force of Systemic Inflammation?