by
Bill Mitchell
My articles My siteAbout meMy booksMy videos
Follow on:Twitter
Summary:
It’s Wednesday and I am catching up on other writing commitments. But I have been examining the latest – Google Mobility Reports – to assess the differences between NSW and Victoria during this latest COVID crisis that has befallen Australia. The results are not particularly robust in terms of statistical benchmarks, rather, being eyeballing exercises, but they do tell and interest story about life in Australia and the cultural differences that lie on either side of the border between our two largest states. And, as usual on a Wednesday, I get out of writing by offering music. Google Mobility Data The latest COVID outbreak in Australia centred, initially on Sydney (NSW) and then spreading to other states because the NSW conservative government refused to lockdown early enough, tells an

It’s Wednesday and I am catching up on other writing commitments. But I have been examining the latest – Google Mobility Reports – to assess the differences between NSW and Victoria during this latest COVID crisis that has befallen Australia. The results are not particularly robust in terms of statistical benchmarks, rather, being eyeballing exercises, but they do tell and interest story about life in Australia and the cultural differences that lie on either side of the border between our two largest states. And, as usual on a Wednesday, I get out of writing by offering music.

The latest COVID outbreak in Australia centred, initially on Sydney (NSW) and then spreading to other states because the NSW conservative government refused to lockdown early enough, tells an interesting socio-economic tale.

In Sydney, the outbreak is now out of control and spreading quickly in the South Western suburbs where lower income households are concentrated, many of who do not have English as their first language.

The spread is within families, which are tightly connected through their cultural backgrounds.

So far there has been only limited transmission of the Delta variant outside those suburbs and into regional NSW.

By contrast, the latest outbreak in Melbourne has been driven largely by higher income networks – spreading the virus through elite membership areas at the Melbourne Cricket Ground (during a football match) and a rugby union game (heavily patronised by higher income, private school types).

And then they spread the virus into regional boarding schools (high income families), seaside locations well out of Melbourne, where the rich have holiday houses etc.

So the virus in Victoria has spread due to the mobility of these high income groups, whereas it has spread in a spatially concentrated way in Sydney where the low income families are intensely accommodated but demonstrate less spatial mobility.

Further, if you grow up in Australia you learn soon enough about the long-standing rivalry between Melbourne and Sydney, which goes back to the colonial beginnings of white settlement on this continent.

You can learn that – Australian regional rivalries – are real and have persisted since the pre-Federation period (before 1901).

These rivalries are defined in many ways that extend beyond the Melbourne-Sydney disputes.

For example, there is a Newcastle-Sydney rivalry within NSW even, where “Sydney has traditionally been politically right-winged compared to Newcastle being politically centre-left.”

There are differences in dominant sporting codes during Winter – Melbourne is Australian Rules football dominated and Sydney Rugby League.

Even within Melbourne – there is a sort of dividing line between those who live north of the Yarra River and those that live on the south side.

I grew up with these cultural differences and even though I have lived in Newcastle (mostly) for three decades I still call Melbourne home and spend as much time there as I can.

There are thus very clear cultural differences between Sydney and Melbourne.

Politically, the differences are also profound.

The Labor Party is in government in Victoria, and one could say that the Andrews Government is the most left-leaning of all governments, whereas the Labor government in Queensland, for example, is more centre-right.

The Labor Party in NSW is dominated by right-wing thugs.

The NSW government is currently held by the Liberal-National Party coalition, which is a pro-business, anti-worker conservative government that believes in ‘freedom’ (as they term it) and since the pandemic began has claimed they will resist lockdowns at all costs.

They claimed they had the gold standard contact tracing system which would allow them to avoid lockdowns when outbreaks occur.

They have also been lax about rules relating to hotel quarantine.

Victoria, despite a lapse in June last year, when they initially resisted a lockdown and paid the price with a massive second wave has learned the lesson and now lockdown early and hard and suppress outbreaks, that in recent periods have come from the lax approaches in South Australia (conservative government) and NSW.

So then the question is whether one can discern these cultural and ideological differences in the way the different cities have responded to the pandemic.

That is where the Google Mobility data can help.

You can learn about the data – HERE.

The data is published as deviations from baseline day, which is “the median value from the 5‑week period Jan 3 – Feb 6, 2020.”

The “dataset that shows how peoples’ movements have changed throughout the pandemic”.

The metrics that data is published for are:

6. Residential – “The ‘Residential’ category shows a change in duration — the other categories measure a change in total visitors.” So it is time spent at home.

From June 2020, Victoria had a major second COVID wave, while the rest of the nation proceeded to eliminate the virus.

Internal borders were shut and after an unsuccessful period of trying to ring fence suburbs, the Victorian government initiated a very harsh lockdown which severely limited mobility and lasted for 112 days.

Several short-lived outbreaks have occurred since and the state is now locked down hard again after the virus came back into the state from NSW.

Just prior to the latest outbreak, Victoria had a serious outbreak as a result of a breach in the South Australian quarantine system.

They locked down very hard and immediately and arrested the problem.

Then they were forced to lockdown again last week as a result of the virus re-entering the state from NSW. The NSW government had refused to restrict mobility anywhere near what was required.

The most recent lockdown will not show up in this data yet.

NSW also has had several short-lived outbreaks and the NSW government claimed it was the ‘gold standard’ in terms of dealing with these outbreaks while ‘staying open’.

It is much more influenced by the business lobby and crazy free market sentiments.

The latest outbreak, however, has jettisoned any sense that it can deal with the virus without lockdown.

It took a long time before the NSW government finally caved in and imposed increasingly harsher restrictions on Sydney residents.

They acted too late and now the numbers are growing and a high proportion of new daily cases have been infectious in the community before being tested.

The experts (not me) are predicting a suppression strategy will require an increased lockdown (Victoria style) until at least September.

The conservative gold standard is no longer credible.

All the political attacks from the conservative NSW and Federal governments against the Labor state government in Victoria last year have come back on them after this major failing by the NSW government which has endangered the whole nation.

I produced the following six graphs for Victoria and NSW, based on the different metrics that Google publishes their mobility data for.

The raw data is the lighter lines and the thick lines are 7-day moving averages, to provide a better view of the trends.

They tell a story of the quite distinct cultures that exist between Victoria (predominantly Melbourne) and NSW (predominantly Sydney) and the different political ideologies of the governments in each state.

You can clearly see that NSW has not restricted retail nearly as much as Victoria, and that accounts for the escalation in virus infections early in this current Sydney outbreak.

They delayed that restriction and we are now all paying for it. 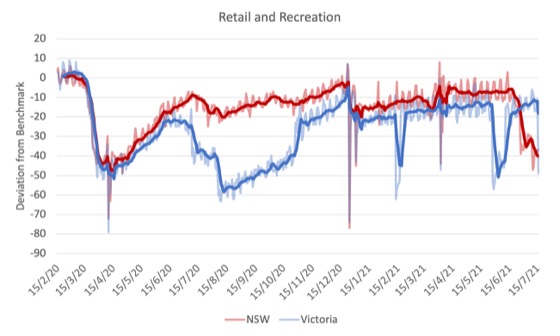 All lockdowns have allowed residents to shop daily for food and pharmaceutical products. 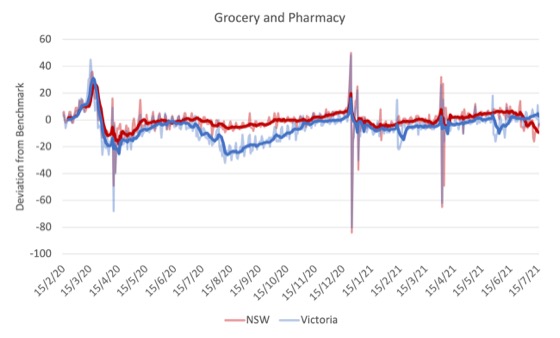 Both states continued to allow residents to exercise in public parks although conditions (group size and composition varied). 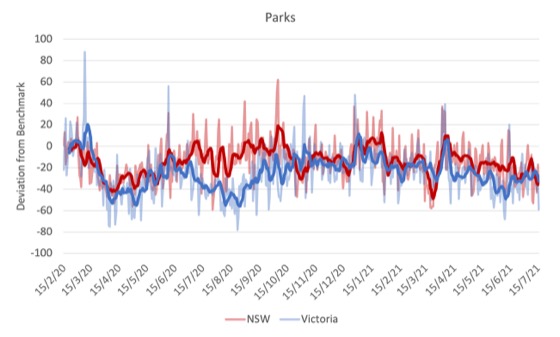 The impact on public transport is much more extreme in Victoria relative to NSW.

And you can see the learning curve in Victoria.

In the June 2020 outbreak, it took some time before people abandoned public transport, which was in line with the delay in total lockdown being imposed.

In the outbreaks since, the Victorian government has gone early and hard and the impact on public transport has been sudden.

In my own experience, travelling to both cities regularly, Victorians also are much more cautious on public transport since the pandemic – mask wearing proportions are very high relative to NSW travellers. 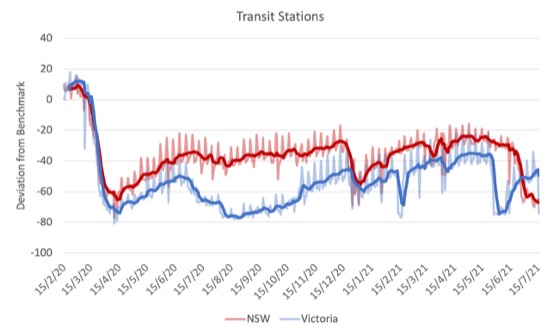 Both states invoked work-from-home approaches for those who could relatively early in each outbreak.

However, it is obvious that Victorian workers have embrace that more intensely. 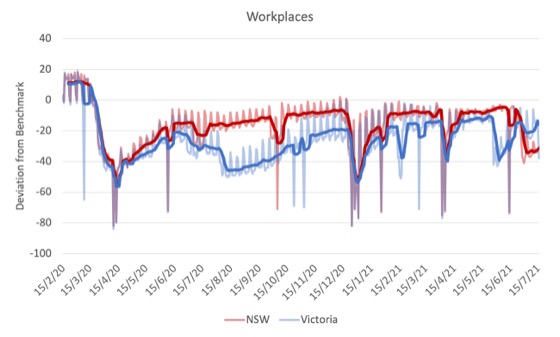 Noting that the residential metric is not about ‘visitor’ frequency but duration, Victorians clearly have maintained safety by staying home much more than NSW residents. 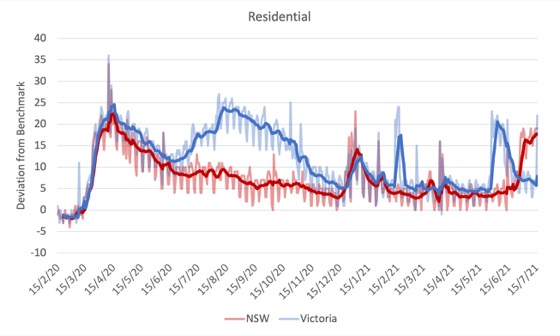 The overall impression is that early on in the pandemic (February to April 2020), the behaviour in both states was very similar as all residents were scared of the unknown.

But then the experience deviated quite markedly, in part, because Victoria endured a really long second wave last Winter, and learned from that experience.

NSW is now undergoing a severe second wave and has not yet learned from Victoria’s experience.

In part, the slow learning curve in NSW is a response to residents being told by the NSW government that there was no problem and their ‘gold standard’ health department would get them through the crisis without the need for lockdowns.

That sort of attitude ingrained a complacency that you don’t see in Victoria these days.

This is what I have been listening to while working this morning.

This piece – Mercy – was the final track on the 2020 Album released by Max Richter entitled – Voices.

The song was written by – Hilary Hahn.

Here is a review from the British Gramophone site of the album – Richter Voices.

We learn that ” the work is based on the Universal Declaration of Human Rights” and Max Richter’s disdain and concern for the “post-truth politics in the 21st century”.

He regularly produces albums and flows of music that intertwine political and social issues with the post minimalist style he works within. No mean feat.

The tone suits my mood today.

Bill Mitchell is a Professor in Economics and Director of the Centre of Full Employment and Equity (CofFEE), at the University of Newcastle, NSW, Australia. He is also a professional musician and plays guitar with the Melbourne Reggae-Dub band – Pressure Drop. The band was popular around the live music scene in Melbourne in the late 1970s and early 1980s. The band reformed in late 2010.
My articlesMy siteAbout meMy books
Follow on:Twitter
Previous British House of Lords having conniptions about QE – a sedative and a lie down is indicated
Next Debate about the National Disability Insurance Scheme driven by the usual ‘taxpayer’s money’ arguments

The Ambivalence of Verfügbare Zeit