by
Bill Mitchell
My articles My siteAbout meMy booksMy videos
Follow on:Twitter
Summary:
I have been working on an article that will come out in the press soon on inflationary pressures. It is obvious that characters like Larry Summers and Olivia Blanchard are trying to stay at the centre of the debate by issuing various lurid threats about the likelihood of an inflation outbreak in the US and elsewhere. Last week, the Financial Times published an article (June 3, 2021) by the former German Finance Minister and now President of the Bundestag, Wolfgang Schäuble – Europe’s social peace requires a return to fiscal discipline. I was initially confronted with the juxtaposition of this author, who bullied all and sundry during to the GFC to ensure an austerity mindset was maintained at great cost to the millions who were deliberately forced to endure unemployment, with the photo of

Massive wastage of labour in the European Union

Culture of austerity distorts business decision-making and we all lose

I have been working on an article that will come out in the press soon on inflationary pressures. It is obvious that characters like Larry Summers and Olivia Blanchard are trying to stay at the centre of the debate by issuing various lurid threats about the likelihood of an inflation outbreak in the US and elsewhere. Last week, the Financial Times published an article (June 3, 2021) by the former German Finance Minister and now President of the Bundestag, Wolfgang Schäuble – Europe’s social peace requires a return to fiscal discipline. I was initially confronted with the juxtaposition of this author, who bullied all and sundry during to the GFC to ensure an austerity mindset was maintained at great cost to the millions who were deliberately forced to endure unemployment, with the photo of John Maynard Keynes under the title of the article. The title didn’t seem to match the picture. My first impressions were correct. Lessons have not been learned.

It took until the June-quarter 2015, more than 7 years after the onset of the GFC, for the Eurozone as a whole to get back to the production size they achieved in the March-quarter 2008.

These differences were mostly created by the different fiscal policy responses the respective governments took.

The austerity that the European Commission and its Troika mates imposed on the 19 Member States directly led to the massive waste of productive potential and income generation in that region. 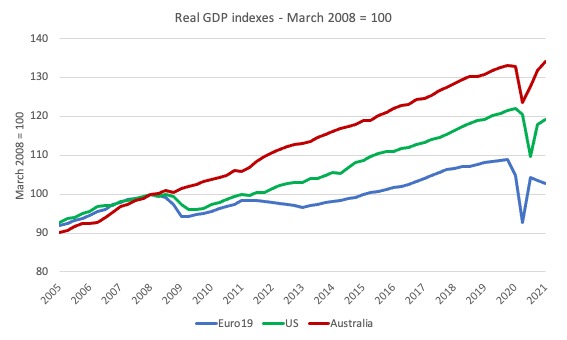 For individual countries the situation is also rather diverse and provides an empirical refutation of the crazy political narratives that the creation of the common currency was all about convergence and shared prosperity.

The next graph shows the divergence. Ireland was excluded because of the way their treatment of foreign firm relocations in their national accounts has distorted their growth rates.

With the overall Eurozone exhibiting very little growth (Euro19), the Southern states have fared very badly since the March-quarter 2008.

Spain has contracted by 3.2 per cent overall.

Greece by a staggering 29.5 per cent.

There is no prosperity in these nations when assessed overall. 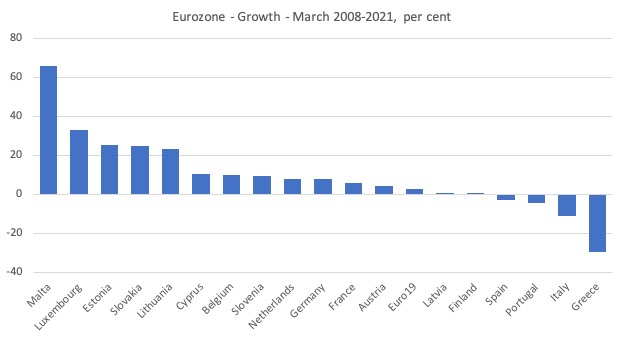 When Wolfgang Schäuble advocated a return to “monetary and fiscal normality”, it is a normality that delivered this mess.

Wolfgang Schäuble started his Op Ed with a quote from John Maynard Keynes:

In the long run we are all dead …

The segment from Keynes was published in his 1923 work – A Tract on Monetary Reform.

He was discussing the reliance by neoclassical economists on the Quantity Theory of Money to underpin their notion of inflation – that excessive monetary growth would feed into spending in a fully employed economy and the only adjustment that would then be possible was for prices to rise to ration the excessive nominal spending.

He vehemently disagreed with the notion that an increase in the volume of currency in circulation would not influence any real variables – like employment, output etc.

The neoclassical school embraced what was known as the classical dichotomy (the split between nominal and real) where monetary expansion would only influence nominal aggregates (prices) rather than have any real stimulative effects (reducing unemployment).

He considered that this might only be true “in the long run” to which he wrote:

But this long run is a misleading guide to current affairs. In the long run we are all dead. Economists set themselves too easy, too useless a task if in tempestuous seasons they can only tell us that when the storm is long past the ocean is flat again.

What he was railing against when he wrote that was the prevailing and dominant neoclassical view that the macroeconomy always tends to achieve ‘equilibrium’ (that is, full employment) if the ‘market’ to unfettered by government interference.

He considered that the capitalist monetary system was biased towards disequilibrium and entrenched unemployment, which would need an external prod to change from that state.

Later, in his 1936 General Theory, he obviously explained this view in more detail.

Keynes would never tolerate a situation where austerity was imposed by governments to reduce fiscal deficits at the same time private spending was weak and collapsing and unemployment was rising.

In other words, he would never have accepted the austerity that Wolfgang Schäuble and his cronies inflicted on the Member States after the GFC.

For Keynes, unemployment was not only a waste of resources but an evil.

… it is worse, in an impoverished world, to provoke unemployment than to disappoint the rentier. But it is not necessary that we should weigh one evil against the other. It is easier to agree that both are evils to be shunned.

In his 1925 book – The Economic Consequences of Mr Churchill – Keynes wrote:

By what modus operandi does credit restriction attain this result? In no other way than by the deliberate intensification of unemployment.

It is obvious from his past record that Wolfgang Schäuble is prepared to tolerate mass unemployment, deliberately created by austerity, if his goal of “sustainability”, is achieved.

Sustainability is defined by Wolfgang Schäuble in terms of debt ratios and fiscal balances.

For him, the most important thing is that Member States repay their debts and maintain their spending within the limits set by the private bond investors, without central banks distorting the investment choice through asset purchasing programs.

This calculus is really independent of the state of the labour market, although the fiscal aggregates are clearly influenced by the health of the that market.

For Wolfgang Schäuble it is more important for a Eurozone nation to be able to issue debt to the private bond investors at stable yields than it is to ensure there is full employment.

It is clear that the aims of the bond investors are not necessarily aligned to the concept of generalised well-being. Their logic differs.

Wolfgang Schäuble also rehearses the standard inflation line by claiming that accelerating inflation will result from the European Central Bank’s public bond buying program, which has purchased most of the Eurozone government debt issued since the pandemic began.

This boosts the inflationary expectations of firms and private households. In this way, the eurozone risks a currency devaluation that could take on a virtually unstoppable dynamic.

There are misconceptions as to what inflation actually is.

Inflation is the continuous rise in the price level.

A one-off price rise does not constitute inflation. For example, after recessions, firms often withdraw discounts and return prices to pre-recession levels.

These adjustments do not constitute inflation.

Share market booms are also not akin to generalised inflation.

Inflation expectations data shows that they are largely stable at pre sent.

Some price pressures have emerged as the pandemic eases.

Shifts in oil prices are driving higher price levels at present, which is no surprise.

Oil prices fell sharply as the lockdowns kept us off the road. This was despite the production cuts that OPEC imposed early on in the pandemic to try to prevent such a fall.

But, now, the increased demand for fuel, as cars have returned to the roads, is pushing up prices.

With energy prices heavily weighted in national statistical agencies price index measures, it is no surprise that the rapid increase in oil prices is driving a rise in CPI outcomes.

The OPEC Reference Basket (ORB) for global oil prices is still below pre-pandemic levels and well below the stable post GFC levels.

And the US Energy Information Administration forecasts oil prices will flatten out through 2022.

When these cyclical adjustments sort themselves out the CPI rises will disappear. 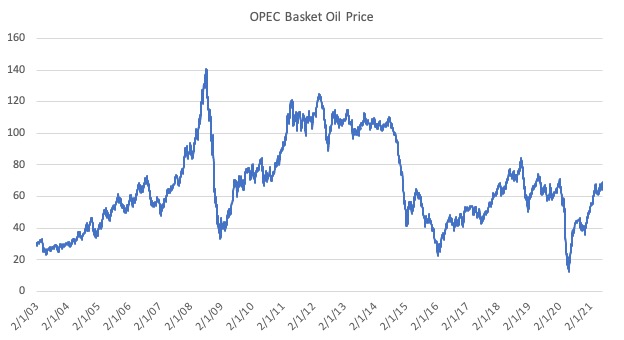 More importantly, these rises have nothing much to do with fiscal or monetary policy.

They just reflect the into-and-out of lockdown variations in overall fuel demand.

However, there is little prospect of a 1970s-style inflation emerging.

Then, strong unions and firms with price setting power engaged in a donnybrook aimed at shifting the real income losses from the rising oil prices onto each other.

But the strength of the relationship between oil prices and inflation has waned since the 1990s.

The ability of workers to engage in this sort of distributional struggle has been constrained by the rise of precarious work, persistent elevated levels of unemployment and underemployment and pernicious legislation that has reduced union capacity to pursue wage demands.

Since 1995, average annual inflation across advanced nations has been just 1.87 per cent.

In Japan, the average inflation rate has been 0.2 per cent.

A 1970-style wages breakout will not happen.

He wants a return to austerity or “monetary and fiscal normality”, a normality that maintained elevated unemployment levels and stagnant growth.

Extraordinarily, Wolfgang Schäuble considers that a return to austerity or “monetary and fiscal normality”, is required to protect the “social fabric”.

Refresh your memory of the graphs above.

This is a normality that maintained elevated unemployment levels and stagnant growth.

But it gets worse.

He thinks that government deficits widen “the gulf between rich and poor”.

Inequality in Europe has increased sharply since the adoption of the common currency.

In this article (April 22, 2019) – Forty years of inequality in Europe: Evidence from distributional national accounts – we learn that:

Inequalities have risen in a majority of European countries since 1980 …

Rising inequalities in Europe appear to have been mainly driven by dynamics visible at the very top of the income distribution. In the past four decades, the poorest 80% Europeans’ average incomes grew by about 20% to 50% … As soon as one looks at richer income groups, however, growth rates are markedly higher, exceeding 100% for the top 1% and culminating at 200% for the top 0.001% of European citizens. Between 1980 and 2017, the top 1% alone captured 17% of European-wide growth, compared to 15% for the bottom 50%.

I guess he could argue this occurred as a result of the rising deficits in the GFC.

But that wouldn’t cut it at all.

There is a problem when fiscal policy expansion is poorly designed and shores up, for example, the pay and benefits of banksters and neglects proper unemployment benefit coverage.

But that is not an intrinsic problem with using expanding deficits to protect jobs.

It is just that neoliberal politicians do neoliberal things and misuse the policy tools at their disposal.

I will write more about that soon.

But what Wolfgang Schäuble has in mind when he talks about “monetary and fiscal normality” is:

Bill Mitchell is a Professor in Economics and Director of the Centre of Full Employment and Equity (CofFEE), at the University of Newcastle, NSW, Australia. He is also a professional musician and plays guitar with the Melbourne Reggae-Dub band – Pressure Drop. The band was popular around the live music scene in Melbourne in the late 1970s and early 1980s. The band reformed in late 2010.
My articlesMy siteAbout meMy books
Follow on:Twitter
Previous US labour market recovery continues but still 7,629 thousand jobs short from February 2020
Next Price rises should be short-lived – so let’s not resurrect inflation as a bogeyman