by
Bill Mitchell
My articles My siteAbout meMy booksMy videos
Follow on:Twitter
Summary:
Last week (April 29, 2021), the US Bureau of Economic Analysis published the latest national accounts data – Gross Domestic Product, First Quarter 2021 (Advance Estimate) – which showed that the US economy grew by 1. The following day (April 30, 2021), saw Eurostat announce that the Eurozone contracted by 0.6 per cent in the first-quarter 2021, which means it is now enduring a double-dip recession. The European Union, now without Britain as a member, contracted by 0.4 per cent. In contrast, with Britain now out of that mess and determining its own future, we saw the British economy return a positive GDP growth rate in February as exports rose and government stimulus sustained domestic activity. Why should we be surprised about this. In this post, I examine the US situation in more detail

Last week (April 29, 2021), the US Bureau of Economic Analysis published the latest national accounts data – Gross Domestic Product, First Quarter 2021 (Advance Estimate) – which showed that the US economy grew by 1. The following day (April 30, 2021), saw Eurostat announce that the Eurozone contracted by 0.6 per cent in the first-quarter 2021, which means it is now enduring a double-dip recession. The European Union, now without Britain as a member, contracted by 0.4 per cent. In contrast, with Britain now out of that mess and determining its own future, we saw the British economy return a positive GDP growth rate in February as exports rose and government stimulus sustained domestic activity. Why should we be surprised about this. In this post, I examine the US situation in more detail and reflect on some interesting trends in the UK. The Eurozone situation is too depressing to write about on a sunny day!

The US Bureau of Economic Analysis said that:

Real gross domestic product (GDP) increased at an annual rate of 6.4 percent in the first quarter of 2021 … In the fourth quarter of 2020, real GDP increased 4.3 percent.

That aggregate was 0.4 per cent, which still means that the US economy managed to grow a tad during the pandemic.

The quarter-on-quarter growth outcome for the March-quarter was 1.56 per cent, which built on the 1.06 per cent in the December-quarter.

The following sequence of graphs captures the story. 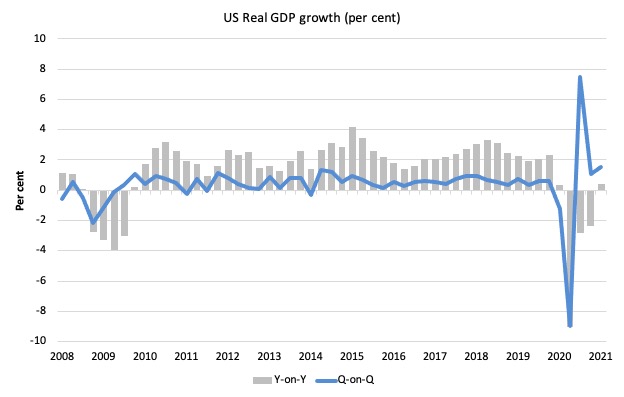 The next graph shows the evolution of the Private Investment to GDP ratio from the December-quarter 2007 (real GDP peak prior to GFC downturn) to the March-quarter 2021.

In more recent times, the investment ratio has stalled and then took a small hit during the pandemic.

It is now at the highest level since the current BEA data series began in the March-quarter 1947. 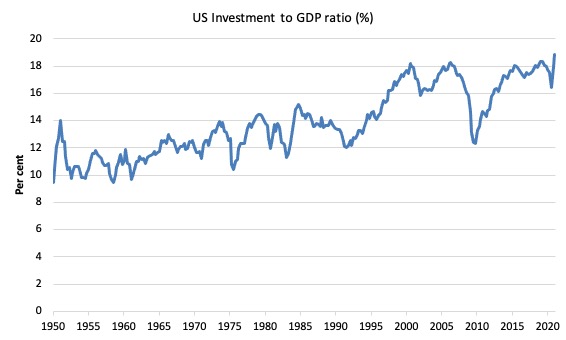 I will have more to say about the current impact on the evolution of potential GDP in a later blog post.

The increase in real GDP in the first quarter reflected increases in personal consumption expenditures (PCE), nonresidential fixed investment, federal government spending, residential fixed investment, and state and local government spending that were partly offset by decreases in private inventory investment and exports. Imports, which are a subtraction in the calculation of GDP, increased …

The increase in PCE reflected increases in durable goods (led by motor vehicles and parts), nondurable goods (led by food and beverages) and services (led by food services and accommodations). The increase in nonresidential fixed investment reflected increases in equipment (led by information processing equipment) and intellectual property products (led by software). The increase in federal government spending primarily reflected an increase in payments made to banks for processing and administering the Paycheck Protection Program loan applications as well as purchases of COVID-19 vaccines for distribution to the public. The decrease in private inventory investment primarily reflected a decrease in retail trade inventories.

The next graph compares the December-quarter 2020 (grey bars) contributions to real GDP growth at the level of the broad spending aggregates with the March-quarter 2021 (blue bars).

The major driver of the GDP rebound has been the recovery in personal consumption spending, which is also probably driven the run down in retail trade inventories.

The change in Administration in the US has seen the government sector increase its contribution to the recovery. 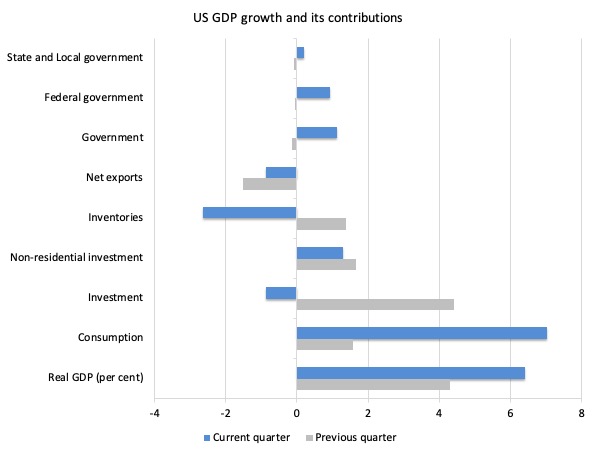 The next graph decomposes the government sector and shows that Federal non-defense spending has dominated. 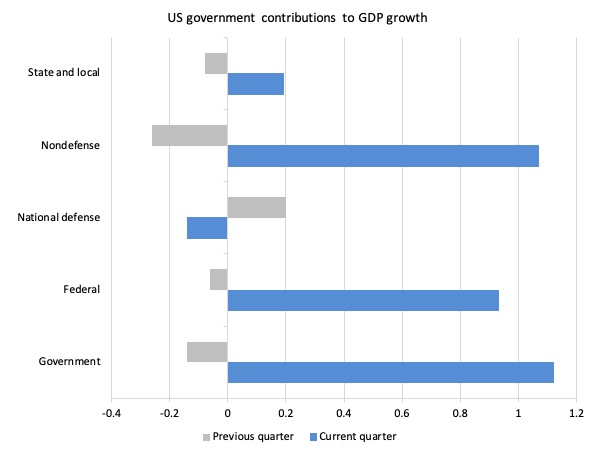 The next graph breaks down the contributions to real GDP growth of the various components of investment.

The overall decline was driven by the inventory reductions, while other capital formation expenditure was positive and contributed to production. 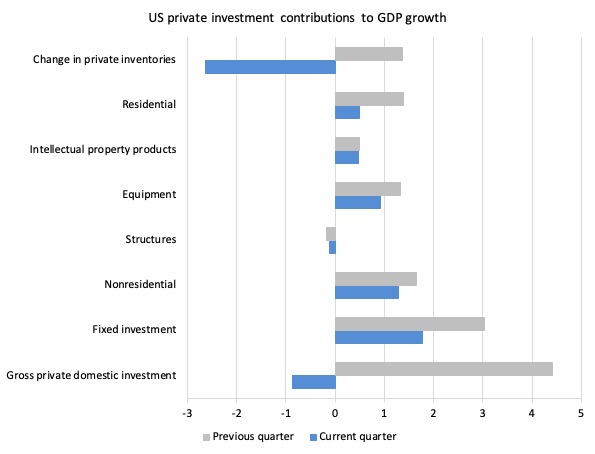 One would expect the inventory cycle to drive an increase in stocks in the June-quarter reinforcing the positive sentiment in the other investment catgories.

US Household consumption and debt

… total household debt increased by $206 billion (1.4 percent) to $14.56 trillion in the fourth quarter of 2020, driven in part by a steep increase in mortgage originations. The total debt balance is $414 billion higher than at the end of 2019. Newly originated mortgages, which include refinances, reached a record high of $1.2 trillion, surpassing in nominal terms the volumes seen during the historic refinance boom in the third quarter of 2003. Auto and student loan balances increased by $14 billion and $9 billion, respectively …

Credit card balances are $108 billion lower than they had been at the end of 2019, the largest yearly decline seen since the series begins in 1999, consistent with continued weakness in consumer spending as well as paydowns by card holders.

So the housing market is robust but households are taken the opportunity of an increased saving rate to pay down their credit card debt.

The data also shows that:

Aggregate delinquency rates have continued to decline in the fourth quarter and continuing what was seen in the second and third, reflecting an uptake in forbearances (provided by both the CARES Act and voluntarily offered by lenders), which protect borrowers’ credit records from the reporting of skipped or deferred payments.

So government fiscal support is both allowing US consumers to save and pay down some debt but also stimulating investment in housing.

The strengthening consumption expenditure and the credit card pay downs are the result of the fiscal support being provided by the government sector. 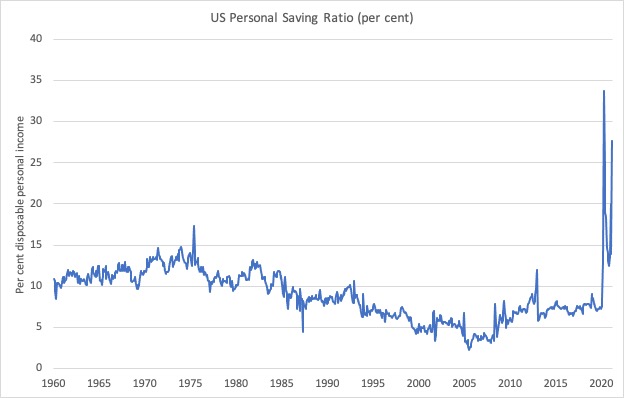 A similar trend of paying down credit card debt is occurring in the UK. UK households have substantially reduced their credit card exposure over the last year.

The ONS data for the – Household’s saving ratio – is shown in the next graph.

The rise in the household saving ratio is observed in most countries as the impacts of the lockdowns reduced expenses (working from home) and reduced opportunities to spend. 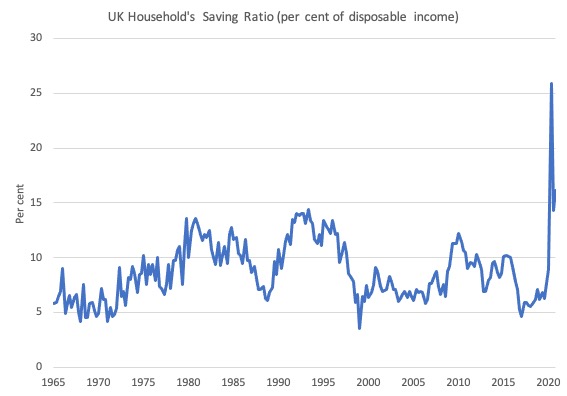 The question is what happens next.

Many commentators are projecting that the build up of savings and pent up frustration will unleash a consumption expenditure boom and expose the UK economy to accelerating inflation.

However, it is unclear what the impacts of the short-term crisis borrowing which some households have engaged in to stay afloat as the pandemic reduced their incomes.

Evidence provided by the UK Parliamentary Committee on Work and Pensions – Universal Credit: the wait for a first payment (published October 19, 2020)- found that:

1. “people on Universal Credit are more likely to need a food bank or have rent arrears than people on the legacy benefits that it replaces …”

2. There was a longer than 5 weeks delay in first payment receipt for “more than 200,000 people” and “many disabled people and people with health conditions must wait much longer than five weeks to receive their first payment in full”.

3. These delays increased the likelihood that low-income persons would fall prey to so-called payday lenders.

In November 2020, the StepChange Debt Charity group released a report – Tackling the coronavirus personal debt crisis –
which showed that:

A personal debt crisis is emerging: the number of people affected by coronavirus in severe problem debt has almost doubled since the beginning of the outbreak to 1.2 million people.

The number of those affected who have fallen into arrears or borrowed to make ends meet has increased from 4.6 to 5.6 million …

So how all that plays out is uncertain but it is hard to see a massive consumer-led boom occurring in the coming year for the UK.

However, while some households that are experiencing financial stress are resorting to emergency credit, overall UK households are taking the opportunity to improve their balance sheet positions.

I have been trawling through the latest data from the Bank of England to understand how far this dynamic has gone.

The following graph shows the monthly growth (annual rate) in consumer credit in the UK since March 1995 to February 2021.

It gives a good indication of the speed at which credit is expanding or contracting over a year.

The data series began in 1994 and you can see two main features:

1. The credit boom before the GFC was not repeated in the slow recovery following the extended recession. British consumers were more cautious in their use of credit card debt.

2. The pandemic has seen a massive decline in the net credit card debt. That means that consumers are paying off their credit card debt at a faster rate than they are taking on new debt. 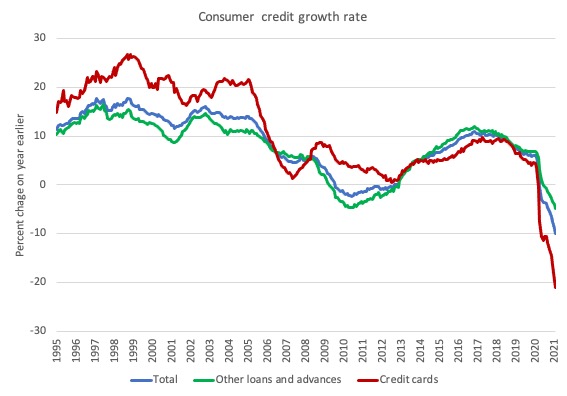 The Insolvency Service in the UK publishes monthly statistics and the latest (issued April 15, 2021) – Monthly Insolvency Statistics March 2021 – shows that for England and Wales:

3. “Overall numbers of company and individual insolvencies have remained low since the start of the first UK lockdown in March 2020, when compared with pre-pandemic levels.”

This is, in part, a reference to the introduction of the – Corporate Insolvency and Governance Act 2020 (June 26, 2020) – which effectively invoked a moratorium on debt repayments to allow companies “to restructure unmanageable debt”.

The lower insolvencies were mostly due to government liquidity support rather than the moratorium in place.

The financial support that the UK government has clearly provided in the wake of the pandemic has helped considerably. Whether it has been enough is debatable but not the issue here.

The point is that this is what the UK government should have done when the GFC hit.

Instead of invoking a deficit and debt hysteria and introducing austerity measures, George Osborne should have expanded the fiscal deficit further to provide essential support for private saving and a household debt reduction effort.

That is what we know about so-called balance sheet recessions where the problem is that non-government debt is too high and an extended period of saving and debt reduction is needed, which must be supported by larger than normal fiscal deficits.

The fact that it didn’t meant that the economy took so much longer to get moving again but also left households with a legacy of excessive debt.

The pandemic has seen a different response from government which is allowing British households in total to pay down credit card and other debt in a significant way.

One of the major responsibilities of a government is to reduce the possibility of a deep and extended recession.

The faster an economy can recover from a recession the less damage there is to business firms and workers.

Fiscal support should always err on the side of ‘too much for too long’ rather than ‘too little for not long enough’.

The scarring from the latter error is much worse and harder to rectify than any slight ‘overheating’ issues that arises from erring in the former way.

Fortunately, and in contradistinction to what we saw during the GFC, governments are not showing any strong tendency to invoke austerity any time soon.

Bill Mitchell is a Professor in Economics and Director of the Centre of Full Employment and Equity (CofFEE), at the University of Newcastle, NSW, Australia. He is also a professional musician and plays guitar with the Melbourne Reggae-Dub band – Pressure Drop. The band was popular around the live music scene in Melbourne in the late 1970s and early 1980s. The band reformed in late 2010.
My articlesMy siteAbout meMy books
Follow on:Twitter
Previous The Weekend Quiz – May 1-2, 2021 – answers and discussion
Next The macroeconomic narrative continues to (MMT) evolve but the games not over yet

A Recent Correlation Regarding Political “Leadership” And The Coronavirus