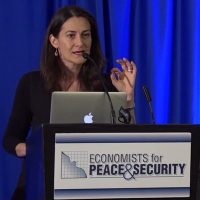 What If We Nationalized Payroll?

As the coronavirus pandemic rages on, the US Congress appropriated a whopping $2 trillion budget to tackle it (about 10% of GDP). The focus was on expanded unemployment benefits and cash assistance to families, as well as grants and loans to small firms and large corporations in hopes that they will halt the torrent of layoffs.
Across the ocean, Denmark took a different approach. The Danish government announced that it would cover 75–90% of certain worker salaries for the next 3 months. However remote the possibility here in the US, it still inspires the question: Could we have followed suit? How shall we think about such a policy?
The Danish approach only covers workers in virus-hit jobs. However, suppose the US government decided to pay the entire wage bill for the economy during

END_OF_DOCUMENT_TOKEN_TO_BE_REPLACED

The Job Guarantee and the Economics of Fear: A Response to Robert Samuelson

The Job Guarantee is finally getting the public debate it deserves and criticism is expected. Building on several decades of research, the Levy Institute’s latest proposal analyzes the program’s economic impact and advances a blueprint for its implementation. Critics have taken note and are (thus far) restating the usual concerns, but with a notably alarmist tone.
The latest, courtesy of the Washington Post’s Robert Samuelson, warns that the Job Guarantee would be 1) an expensive big-government takeover, 2) unproductive and impossible to manage, 3) dangerously disruptive to the private sector, and 4) inflationary.
Samuelson wants us to be afraid—very afraid—of big government. But he forgets that we already have big government—one that devotes hundreds of billions of dollars, time,

END_OF_DOCUMENT_TOKEN_TO_BE_REPLACED 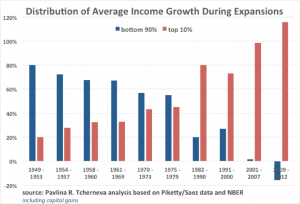 By Pavlina R. TchernevaBard College
Growth in the US increasingly brings income inequality.  A striking deterioration in this trend has occurred since the 80s, when economic recoveries delivered the vast majority of income growth to the wealthiest US households.  This note updates my original inequality chart (reproduced below) with the latest data. For earlier discussions, see e.g., here, here, and here.
Figure 1: bottom 90% vs. top 10%, 1949-2012 expansions (incl. capital gains)
The chart illustrates that with every postwar expansion, as the economy grew, the bottom 90% of households received a smaller and smaller share of that growth. Even though their share was falling, the majority of families still captured the majority of the income growth until the 70s. Starting in the 80s, the trend reverses sharply: as the economy recovers from recessions, the lion’s share of income growth goes to the wealthiest 10% of families. Notably, the entire 2001-2007 recovery produced almost no income growth for the bottom 90% of households and, in the first years of recovery since the 2008 Great Financial Crisis, their incomes kept falling during the expansion, delivering all benefits from growth to the wealthiest 10%. A similar trend is observed when one considers the bottom 99% and top 1% percent of households (for details, as well as complete business cycle data, see here).

END_OF_DOCUMENT_TOKEN_TO_BE_REPLACED

THE ECONOMIC CONSEQUENCES OF DONALD TRUMP

Pavlina R. Tcherneva
Economic consequences
A lot has been said already. For me, this was the culmination of a decades-long process where the Democrats sold out their progressive agenda and happily embraced the Republican’s neoliberal economic policies. For some of the best analysis, see here, here, here and here.
My own view is that the Democrats have not had an economic policy of their own for nearly half a century, just an ‘inferior’ version of what Republicans usually champion—tax cuts on the wealthy, dismantling the public safety-net, ‘fighting’ inflation by creating unemployment, market liberalization and deregulation across the board, which among other things brought us a colossal financial sector that has cannibalized the productive economy.
Democrats need to grapple with the reality that Bill Clinton completed the Reagan revolution, and what we got from both parties is rabid financialization, extreme inequality, corporate welfare, joblessness, and economic insecurity: precisely the conditions that fan the flames of social antagonism and deep-seated racism and bigotry. There are many ways to tell this story but, just think, the real incomes of the vast majority of US households have barely moved in the last two decades.

END_OF_DOCUMENT_TOKEN_TO_BE_REPLACED

A Global Marshall Plan for Joblessness?

By Pavlina Tcherneva(Crossposted from INet)
Global unemployment is expected to surpass 200 million people for the first time on record by the end of 2017, according a recent ILO study, and limitations of official statistics suggest that the problem is much larger . As conventional measures increasingly fail to produce tight labor markets and jobless recoveries become the norm, economists grapple with this new reality by calling it secular stagnation and by adjusting upwards the rates of unemployment deemed ‘natural’ — but the human, social and economic costs of this growing problem are rarely considered in economic modeling.

The Problem: A Global Unemployment Epidemic
Mainstream economic theory considers some level of unemployment to be ‘natural’ (i.e., unresponsive to policy remedies without creating some other problem like inflation), but it largely ignores the harsh human, environmental, and economic costs of unemployment. In fact, some of the best work on this question comes from disciplines outside of economics.
It’s not hyperbole to note, for example, that unemployment kills. Literally. Research shows that one in five suicides is related to unemployment, and joblessness causes 32–37 percent excess mortality for men.