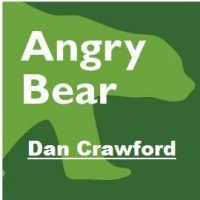 aka Rdan owns, designs, moderates, and manages Angry Bear since 2007. Dan is the fourth ‘owner’.

Has the Third Era of Globalization Ended?

Has the Third Era of Globalization Ended?

Behind the headlines forecasting a global economic recession there is another narrative about the end of globalization. This reflects political tensions over trade, the impact of the pandemic on global supply chains and the shutdown of economic ties with Russia. But dating the beginning and end of the most recent era of the integration of global markets poses challenges.

All chronological assignments for the purpose of establishing historical eras are arbitrary. Did World War II begin in 1939 when Germany and the Soviet Union invaded Poland? Or in 1937 when Japan invaded China? When was the First Industrial Revolution succeeded by the Second Revolution? Mid or

END_OF_DOCUMENT_TOKEN_TO_BE_REPLACED

Mike Konczal and Niko Lusiani at the Roosevelt Institute take a closer quantitative look at the sources of inflation the last two years:

This research brief is the first to explore the size and distribution of markups (essentially the difference between sales and marginal costs) and profit margins across 3,698 firms operating in the US in 2021, reproducing and updating the analysis of Jan De Loecker, Jan Eeckhout, and Gabriel Unger’s The Rise of Market Power and the Macroeconomic Implications. Konczal and Lusiani’s analysis is evidence that the recent sudden high jump in markups fits all three of the main explanatory stories of inflation being debated—namely those related to changes in demand, supply, and market power. Notably, they find that…
…
The

END_OF_DOCUMENT_TOKEN_TO_BE_REPLACED

They have come to resurrect Caesar.

Dana Millbank at the Washington Post points us to JD Vance, the MAGA Republican from Ohio running for a Senate seat in Congress and a potential American Julius Caesar.

“‘Friends, Romans, countrymen, lend me your ears: They have come to resurrect Caesar.

MAGA Republican leaders take umbrage at being accused of ‘semi-fascism,‘ which is understandable: Twentieth-century dictators such as Mussolini and the German guy with the mustache gave fascism a bad name. But the MAGA crowd isn’t disavowing totalitarianism, per se. It’s just their taste in authoritarian figures skews toward the classics. They’re old-school — 1st century B.C. old.

‘Hail, Caesar’ goes down so much easier than ‘Heil Hitler.’”

END_OF_DOCUMENT_TOKEN_TO_BE_REPLACED

Household incomes have fallen since 2019

“Household incomes have fallen since 2019 despite growth in workers’ earnings“

“On Thursday, the U.S. Census Bureau released 2021 household income and household earnings data for states from the American Community Survey (ACS). National averages hide the wide disparities experienced by workers and families across states while state-level data can help us understand how policy choices impact income and earnings.

END_OF_DOCUMENT_TOKEN_TO_BE_REPLACED

Replacement theory in the US 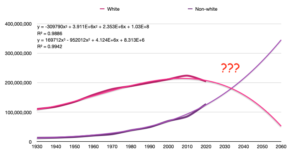 Replacement theory in the US

“Replacement theory” is a semi-racist, often-hysterical belief that — in the US — White Christians will be “replaced” by others.

The racist part arises from the vapid conception of “race” and/or “White” which rests on no biological or scientific facts. As anyone can tell you, every country (or tribe or community) has its own ideas of race, purity, etc. (Here are some of my earlier thoughts on race.)

In the US, “race” discussions are dominated by its history of slavery, bigotry, migration and inequality, which means that “race” is often a code-word for some other issue that people would prefer not to address or solve,

END_OF_DOCUMENT_TOKEN_TO_BE_REPLACED

Lifted from notes by One handed economist David Zetland comes with this reminder about US life expectancy dropping. David goes further and gives the reasons for decreasing Life Expectancy.

America, my increasingly ex-country, has lower life expectancy than 21 “peer” countries. This decline being due to a combination of death from Covid, cars, guns, and lifestyle.

The first fact about Covid was sadly unsurprising:

The coronavirus pandemic killed so many people that U.S. life expectancy fell from roughly 79 in 2019 to 76 in 2021—the largest two-year decline in nearly a century. The drop was sharpest among Native Americans and Alaska Natives, whose life expectancy fell to 65, close to the national average during World War II.

END_OF_DOCUMENT_TOKEN_TO_BE_REPLACED

Banking for the People

“Banking for the People: Lessons from California on the Failures of the Banking Status Quo,” Roosevelt Institute, Emily DeVito

The current banking system in the United States and its fine and fee-heavy profit model is a barrier to economic entry and financial security for millions of individuals and families. Especially a barrier for those who are Black, brown, and/or low-income. In addition to being grossly unfair, our status quo banking system creates a damaging, multitiered economy that locks out everyone who can’t afford to participate in it. At the same time, millions of prospective customers face obstacles to banking in person, which can be a crucial prerequisite to economic independence and security.

By no means is this

END_OF_DOCUMENT_TOKEN_TO_BE_REPLACED 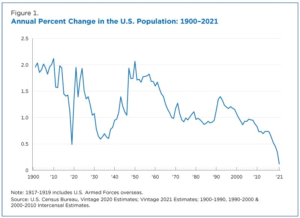 In 2020, natural disasters forced more than 30 million people to migrate across the globe. by 2050, climate change impacts could bring this number up to 216 million.Mass migration is happening against the global backdrop of a growing nativist consensus championed by the far right and rooted in racist evaluations of immigrants’ and refugees’ “worthiness.”

Some of the findings from Angry Bear: “Growth in Population, Immigration, and Migration” – Angry Bear (angrybearblog.com)

The reality? The Population Grew 0.1% in

END_OF_DOCUMENT_TOKEN_TO_BE_REPLACED

I listened to this and it angers me.

First, we hear from Justice Roberts about barricades around SCOTUS after Roe v Wade. Not one word about the barricades being erected after the January 6 riots at the Capitol. Erected due to violent protest causing injury, death, and destruction at the Capitol.

The next stop after the Capitol was supposed to be SCOTUS on January 6. “Barricades surrounding Capitol in wake of the Jan. 6 riot now coming down” – ABC News (go.com)

Roberts: “It was gut-wrenching to drive into work and see barricades . . .” due to Dobbs protesters expressing their rights to do so. It was always in Robert’s plan or head to strike down abortion. But to do it after the 2022 elections. The more rabid of the Federal

END_OF_DOCUMENT_TOKEN_TO_BE_REPLACED

China and the Debt Crisis

China and the Debt Crisis

Sri Lanka is not the first developing economy to default on its foreign debt, and certainly won’t be the last. The Economist has identified 53 countries as most vulnerable to a combination of “heavy debt burdens, slowing global growth and tightening financial conditions.” The response of China to what will be a rolling series of restructurings and write-downs will reveal much about its position in the 21st century international financial system.

Debt crises are (unfortunately) perennial events. In the 1970s many developing countries, particularly in Latin America, borrowed from international banks to pay energy bills that had escalated after oil price increases enacted by the Organization of Petroleum

END_OF_DOCUMENT_TOKEN_TO_BE_REPLACED

Lawrence Mishel and Josh Bivens  at Economic Policy Institute take a look at why wages have been relatively flat compared to productivity gains in the US economy, inequality of compensation, and declining share of income between labor and capital. Broad strokes but helps with context and suggesting ideas for current government actions.

Inequalities abound in the U.S. economy, and a central driver in recent decades is the widening gap between the hourly compensation of a typical (median) worker and productivity—the income generated per hour of work. This growing divergence has been driven by two other widening gaps, that between the compensation received by the vast majority of workers and those at the top, and that between labor’s share of

END_OF_DOCUMENT_TOKEN_TO_BE_REPLACED

Climate Change and Back to Drawing Board for Economists

NYT article Pace of Climate Change Sends Economists Back to Drawing Board, Lydia DePillis, Aug. 25, 2022, a reporter on the Business desk at The New York Times. Previously, she covered federal agencies at ProPublica, the national economy at CNN, the Texas economy at The Houston Chronicle, labor and business at The Washington Post, the technology industry at The New Republic and real estate at the Washington City Paper. She grew up in Seattle and graduated from Columbia University with an undergraduate major in history.

They underestimated the impact of global warming, and their preferred policy solution floundered in the United States.

The dynamics of this article reveal two conflicting and (maybe three?) opposing views. Opposing as

END_OF_DOCUMENT_TOKEN_TO_BE_REPLACED

I wanted to find a post/article which could details the differences between 2011 and 2022. I could not find exactly what I wanted. Infidel’s post comes close. I am looking at the years after 2008 when the nation was struggling to get back on an even keel.

What is difference between 2011 and 2022? For one thing, actions not taken in 2011, were taken in 2022 due to the pandemic. The extension of funds to help families with children, increased ACA coverage achieved through the coverage limits at 250% and also beyond 400%, funding for businesses to meet payroll (PPP), increased unemployment payments, etc. in 2020.

I do not recall seeing this in 2011. But then after 2 years, Congress switched sides and Obama was left with Executive Orders.

END_OF_DOCUMENT_TOKEN_TO_BE_REPLACED

Who Should Have Children? If You have to ask . . .

Take the time. Watch this, I just did. It explains exactly why the middle class is in trouble and where the money has gone.

Over on Angry Bear we were discussing who can afford children, in this post: “Who Should Have Children? Or, If You Have To Ask, You Can’t Afford Them“

Me again: Our Middle Class is still in trouble. The jobs have shifted overseas. Younger people have trouble gaining an adequate education without going deeply in debt One hundred thousand dollars for 4 years at at good college is not out of the question. It is still a two-income family to get by. Think for a minute, we are talking about the Middle Class.

END_OF_DOCUMENT_TOKEN_TO_BE_REPLACED

Research that addresses rice yield losses is important because rice is an essential crop for feeding hundreds of millions of people each year – and because a changing climate poses challenges for global food security.

“Warmer nights throw the rice plant’s internal clock out of whack,” says Colleen Doherty, an associate professor of biochemistry at North Carolina State University. And corresponding author of a paper on the work.

“Many people believe plants are not dynamic, but they are. Plants constantly regulate and adjust their biological processes. Plants gear up for photosynthesis just before dawn, winding that down in the late afternoon, and determine precisely how

END_OF_DOCUMENT_TOKEN_TO_BE_REPLACED

Angry Bear Michael Smith’s post The Future of Farming reminded me that food and water supply issues need regular updates and highlighting. This report caught my eye since we here in Boston are experiencing very dry conditions with hot day temps.

The report, released Monday by the nonprofit research group First Street Foundation, found that within a column of America’s heartland stretching from Texas and Louisiana north to the Great Lakes, residents could experience heat index temperatures above 125 degrees Fahrenheit by 2053 — conditions that are more commonly found in California’s Death Valley or in parts of the Middle East.