[unable to retrieve full-text content]Two European elections – in Germany on 24 September 2017 and Italy on 4 March 2018 – warn that the peoples of Europe are drifting apart. Much of the recent deepening of these divisions can be traced to Europe’s single currency, the euro. This column argues that the political divide in Europe may now be hard to roll back absent a shift in focus to national priorities that pay urgent attention to the needs of those being left behind.
The post The euro area’s deepening political divide appeared first on Credit Writedowns.
Feed # abf0d081857b85fe6be494728740a4f1
Feed # abf0d081857b85fe6be494728740a4f1

END_OF_DOCUMENT_TOKEN_TO_BE_REPLACED

[unable to retrieve full-text content]A recent literature has explored growing personal wealth inequality in countries around the world. This column explores the widening wealth gap between regions and across states in Europe. Using data going back to 1900, it shows that regional convergence ended around 1980 and the gap has been growing since then, with capital regions and declining industrial regions at the two extremes. This rise in regional inequality, combined with rising personal inequality, has played a significant role in the recent populist backlash.
The post The return of regional inequality: Europe from 1900 to today appeared first on Credit Writedowns.
Feed # abf0d081857b85fe6be494728740a4f1

END_OF_DOCUMENT_TOKEN_TO_BE_REPLACED 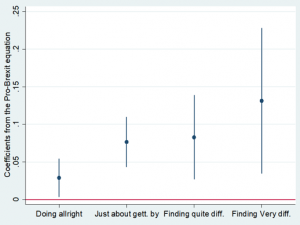 Originally published on 17 October 2017 at Vox
By Federica Liberini, Andrew Oswald, Eugenio Proto, Michela Redoano
There is a very wide debate on the determinants of the vote by British citizens to leave the EU. In particular, the idea that this vote reflects discontent and disillusionment has been widely discussed in the UK and European media. Furthermore, large numbers of newspaper and TV journalists have suggested that the decision to leave the EU was forced on the country by special groups (particularly old voters swamping the views of the young, and discontented citizens swamping the views of others).
Accordingly, there is already a number of academic writings on the topic. Some have emphasised the concept of a divided

END_OF_DOCUMENT_TOKEN_TO_BE_REPLACED 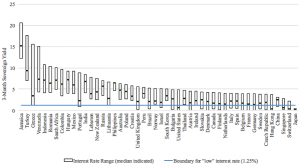 By Stijn Claessens, Nicholas Coleman, Michael Donnelly, 18 May 2016
This post was first published at Vox
Since the Global Crisis, interest rates in many advanced economies have been low and, in many cases, are expected to remain low for some time. Low interest rates help economies recover and can enhance banks’ balance sheets and performance, but persistently low rates may also erode the profitability of banks if they are associated with lower net interest margins. This column uses new cross-country evidence to confirm that decreases in interest rates do indeed contribute to weaker net interest margins, with a greater adverse effect when rates are already low.
While overall bank profitability in advanced economies (measured by return on assets) has recovered from the worst of the Global Crisis, it remains low. Many advanced-economy banks are facing profitability challenges related to low net interest margins (NIMs) – typically measured as net interest income divided by interest earning assets – as well as weak loan and non-interest income growth.

END_OF_DOCUMENT_TOKEN_TO_BE_REPLACED

The Eurozone has been infected by the US slowdown 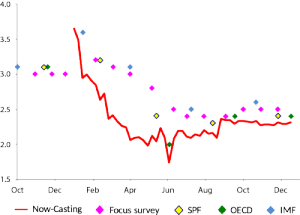 By Alberto Caruso, Thomas Hasenzagl, Filippo Pellegrino, Lucrezia Reichlin
This post first appeared at Vox.
Recent data releases related to the Eurozone have been disappointing. This column argues that momentum from the long-delayed 2014-15 recovery is faltering because the Eurozone economy is affected, with a lag, by the US slowdown. The traditional, lagged relationship between the EZ and US business cycles – which disappeared in the aftermath of the Global Crisis – is now reasserting itself.

On Friday 12 February, the fourth quarter GDP numbers for the countries of the Eurozone were released. Germany and Italy disappointed – at 0.27% and 0.11% respectively, the quarterly growth out-turns were below consensus expectations of professional forecasters.
One question worth asking is whether the recent unexpected weak numbers for the Eurozone are a consequence of the US slowdown, in which case we should expect further weakening down the road.
Recent bad news from the Eurozone arrived after a disappointing 2015 in the US. Figure 1 shows the evolution of the forecast for 2015 GDP growth by Now-Casting (red line), from a survey of professional forecasters (Focus), and from several official forecasters. It shows that downward revisions of growth estimates have persisted since the beginning of 2015 – year-on-year GDP growth for 2015 was estimated at 3.

END_OF_DOCUMENT_TOKEN_TO_BE_REPLACED

By Fabio Ghironi
As originally written at Vox.
Success of the German-inspired solution for the latest Greek crisis is far from assured. If it fails, the Eurozone may be changed forever. This column argues that the failure would lead to an outcome that has been favoured for decades by Germany’s Finance Minister, Wolfgang Schäuble. Perhaps the package the Eurozone agreed is just a backdoor way of getting to the ‘variable geometry’ and monetary unification for the core that the Maastricht criteria had failed to achieve.
The Greek crisis risks shattering the Eurozone as we know it. Germany’s Finance Minister Wolfgang Schäuble has been leading a coalition of hawks who appear determined to make Grexit an unavoidable outcome. If not immediately then at least once it becomes clear (or clearer) that it is impossible for Greece to satisfy the conditions it is being asked to meet.
As one ponders Mr. Schäuble’s possible motives for insisting on such demanding (many would say infeasible) targets, it is instructive to recall his political and intellectual history in the run-up to the euro.
How Schäuble viewed the Eurozone
Mr. Schäuble was Minister of the Interior of the Federal Republic of Germany between 1989 and 1991. In this capacity, he played a central role in the negotiations that led to German reunification.

END_OF_DOCUMENT_TOKEN_TO_BE_REPLACED

By Charles Wyplosz
This article originally appeared on Vox on 14 Jul 2015
The new bailout deal for Greece was not easy. This column argues that it was also a failure. It will not be enough to recapitalise banks, it asks for structural reform that exceeds Greek capacities, and it raises the Greek debt-to-GDP ratio to unsustainable levels. In a few months or quarters, the programme will fail and the Grexit question will flare up again.
The Summit of 12 July faced the risk of making two mistakes: inadvertently pushing Greece out of the Eurozone, and agreeing on a mistaken strategy. It achieved the amazing feat of making both mistakes and radically altering the monetary union.
The reason why the Heads of States and Governments were meeting once again was that the previous programmes had failed. Of course, Greece did not deliver on its commitments, for several reasons, one of which is that it never had a chance of delivering.
The failed Greek bailout programmes
Back in 2010, the Greek debt was already excessive. The economic logic, secretly proposed by the IMF, was to cut the debt deeply enough to avoid a crippling, front-loaded fiscal contraction. Instead, Greece plunged into a deep depression.
The sum of the GDP shortfall, the difference between each year’s real GDP level and the 2007 level, amounts to 135%.

END_OF_DOCUMENT_TOKEN_TO_BE_REPLACED

By Charles Wyplosz
originally posted at Vox on 29 Jun 2015
This weekend’s dramatic events saw the ECB capping emergency assistance to Greece. This column argues that the ECB’s decision is the last of a long string of ECB mistakes in this crisis. Beyond triggering Greece’s Eurozone exit – thus revoking the euro’s irrevocability – it has shattered Eurozone governance and brought the politicisation of the ECB to new heights. Bound to follow are chaos in Greece and agitation of financial markets – both with unknown consequences.
The ECB has decided to maintain its current level of emergency liquidity to Greece (ECB 2015). By refusing to extend additional emergency liquidity, the ECB has decided that Greece must leave the Eurozone. This may be a legal necessity or a political judgement call, or both. Anyway, it raises a host of unpleasant questions about the treatment of a member country and about the independence of the central bank.
As anticipated (Wyplosz, 2015), the negotiations between Greece have led nowhere. As a result, Greece is bound to default on all maturing debts in the days and weeks to come. With a primary budget close to balance, the Greek government could have soldiered on until new negotiations about the unavoidable write-down of its debt.

END_OF_DOCUMENT_TOKEN_TO_BE_REPLACED

Yanis Varoufakis: Greece, Germany and the Eurozone – Keynote at the Hans-Böckler-Stiftung, Berlin, 8 June 2015

This post is re-posted from Yanis Varoufakis’ blog with his permission.

CLICK HERE FOR THE VIDEO
Thank you for inviting me. Thank you for being here. Thank you for the warm welcome. Above all thank you for the opportunity to build bridges, to pave common ground, to bring harmony in the face of blatant attempts to sow the seeds of discord between peoples whose historic duty is to come together.
[DIVIDED BY A COMMON CURRENCY]
Since the end of the war Greeks and Germans, together with other Europeans, have been uniting. We were uniting despite different languages, diverse cultures, distinctive temperaments. In the process of coming together, we were discovering, with great joy, that there are fewer differences between our nations than the differences observed withinour nations.
Then came the global financial disaster of 2008 and, a year or two later, European peoples, who were hitherto uniting so splendidly, ended up increasingly divided by a… common currency – a paradox that would have been delightful if only it were not so fraught with danger. Danger for our peoples. Danger for our future. Danger for the idea of a shared European prosperity.

END_OF_DOCUMENT_TOKEN_TO_BE_REPLACED

Trends and prospects for private-sector deleveraging in advanced economies 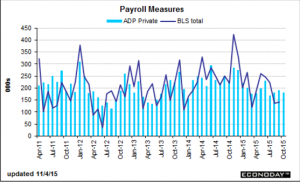 In-depth analysis on Credit Writedowns Pro.
You are here: Economy » Trends and prospects for private-sector deleveraging in advanced economies

This post originally appeared on Vox.
By Serkan Arslanalp, Reinout De Bock, Matthew Jones
Major advanced economies have made mixed progress in repairing the private sector’s balance sheets. This column explores private sector deleveraging trends and calls for a set of policies that will return debt to safer levels. Monetary policies should support private sector deleveraging and policymakers should not ignore the positive impact of debt restructuring and write-offs on non-performing loans.
Major advanced economies have made mixed progress in repairing private balance sheets. US and UK households have sharply reduced gross debt levels as a share of GDP, but gross household debt still remains high in many countries (Figure 1). Leverage among nonfinancial firms has come down from its peak in many advanced economies. But debt levels are still high in the corporate sector in some Eurozone countries, in part because of slow progress on the resolution of impaired assets – a company’s assets that are worth less on the market than as listed on the company’s balance sheet. This is unfortunate in light of a growing body of literature showing that high debt levels are generally associated with low medium-term growth (e.g.