by
Chris Blattman
My articles My booksMy videos
Follow on:Twitter
Summary:
A member of the Ukrainian special forces in the city of Kharkiv on March 30, 2022. Photo: FADEL SENNA/AFP/Getty Images By Adam Kuper May 6, 2022 11:05 am ET On July 30, 1932, exactly 6 months before

Chris Blattman writes Interview with Christianity Today on Why We Fight

On July 30, 1932, exactly 6 months before Hitler became chancellor of Germany, Albert Einstein sent a despairing letter to Sigmund Freud. “Dear Professor Freud,” Einstein wrote. “Is there any way of delivering mankind from the menace of war? It is common knowledge that, with the advance of modern science, this issue has come to mean a matter of life and death for civilisation as we know it.”

Why We Fight: The Roots of War and the Paths to Peace

We may earn a commission when you buy products through the links on our site. 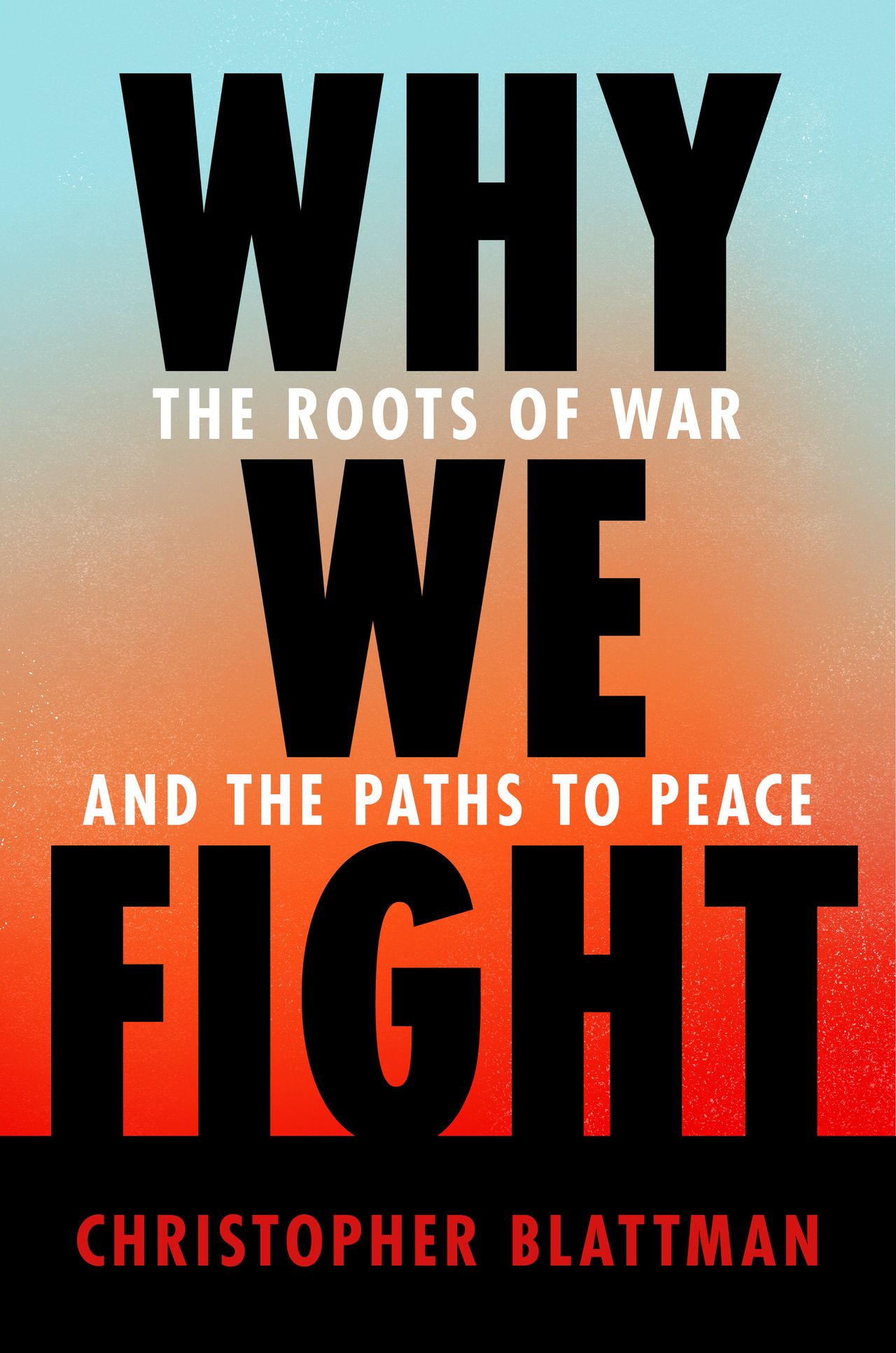 Rulers and their arms-merchant cronies manipulate public opinion, Einstein reflected. But “how is it possible for this small clique to bend the will of the majority, who stand to lose and suffer by a state of war, to the service of their ambitions?” Propaganda had to be part of any explanation. The government “has the schools and press, usually the Church as well, under its thumb,” he wrote. “This enables it to organize and sway the emotions of the masses, and makes its tool of them.” But as a rationalist, Einstein was still baffled. “How is it these devices succeed so well in rousing men to such wild enthusiasm, even to sacrifice their lives?” Is it down to human nature, he wondered? Perhaps “man has within him a lust for hatred and destruction.”

In his response, Freud wrote that men, like all male animals, are programmed to settle conflicts by fighting. “Violent compulsions” may sometimes be counterbalanced by “ties of sentiment,” but only within narrow bounds.

14 Books We Read This Week 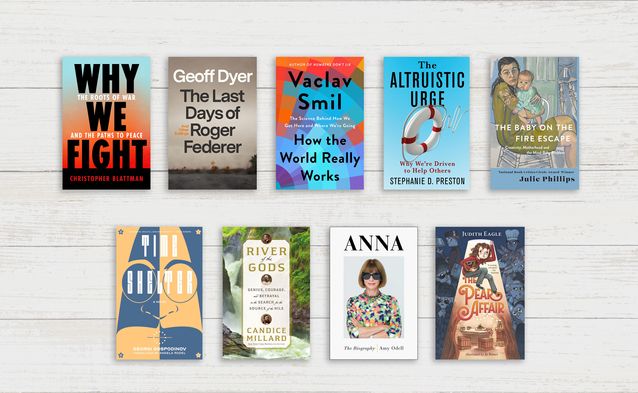 An economist looks at the causes of war, a mismatched pair seek the source of the Nile and an essayist considers the end.

In “Why We Fight: The Roots of War and the Paths to Peace,” Christopher Blattman, an economist and political scientist at the University of Chicago, draws on recent economic theories to address the great questions of war and peace that have been debated for millennia.

Mr. Blattman agrees with Freud that male aggression is easily aroused and that all sorts of intergroup violence follow a similar pattern. “When I say war, I don’t just mean countries duking it out,” Mr. Blattman writes. “I mean any kind of prolonged, violent struggle between groups. That includes villages, clans, gangs, ethnic groups, religious sects, political factions, and nations. Wildly different as these may be, their origins have much in common.”

Mr. Blattman offers a string of anecdotes about feuding gangs in Chicago and Medellín, Colombia. But scale matters. Gang wars, punch-ups between two lots of sports fans, even medieval sieges (among the author’s other examples) are very different in many important ways from the total wars of the modern world. As Mr. Blattman observes, wars between nations are less common now than ever before precisely because the consequences are so terrifying. And there is another critical difference: National governments can, in theory, control violence within their boundaries; but there is no international government that can put an end to wars between nations.

Perhaps men are indeed easily roused to martial fervor, but it is up to the leaders of nations to make decisions about war and peace. “In my view, there are no good or bad leaders,” Mr. Blattman writes. “There are only constrained and unconstrained ones.” Democratic leaders have to take their voters into account. The media ask hard questions. The system imposes checks on executive power. And so, for nearly a century now, democracies have not gone to war against other democracies.

Autocrats, meanwhile—particularly if they run resource-rich economies— find it easier to let their soldiers and civilians bear the costs of war while they indulge their own ambitions and fantasies. Consequently, Mr. Blattman writes, “it’s the places ruled by strongmen with few checks that appear to be the most warlike with neighbors.”

Some autocrats may go to war to distract the population from more immediate concerns. Others are out for vengeance or glory, or are committed to some religious crusade. These are but a few examples of what economists call the agency problem. (You expect your agent to act in your interests, but he has interests of his own.)

As an economist, Mr. Blattman assumes that, leaving aside the occasional madman, leaders—democratically elected or otherwise—weigh their options and seek to make optimal choices. Game theory, the science of strategy, “works out how one side will behave based on what it believes its opponent will do.” Applied to the study of auctions and bargaining by John Nash, winning him a Nobel Prize in economics in 1994, game theory lays down strategies for predicting and countering your opponent’s moves in any negotiation, helping you decide when to push your luck, when to bluff and when to fold. Most leaders don’t know anything about the arcane models of economics, but experience has taught them the logic of deal-making.

Game theory assumes, among other things, that “both groups have the same information and agree on the probabilities” of outcomes. As Mr. Blattman points out, however, “the world is seldom so stable, transparent, or easy to assess.” Negotiators often operate in semidarkness, where crucial information is lacking or potentially misleading. When much is uncertain, judgments are more likely to be impulsive, directed by habit, emotion and prejudices. Confirmation bias takes over, along with other cognitive shortcuts. Groupthink rules.

To understand decision-making under these conditions, Mr. Blattman turns to the work of Daniel Kahneman, who won the 2002 Nobel Prize in economics for his work on how people make decisions in the real world. “Humans are not well described by the rational-agent model,” Mr. Kahneman observed in his 2011 bestseller, “Thinking, Fast and Slow.” We are all sometimes less than rational. Every cool Dr. Jekyll is liable to turn into a hot Mr. Hyde, particularly when he is pressed for time and operating with partial and conflicting information. The slow thinker in us is logical, respectful of evidence, ready to consider objections. The fast thinker is impulsive and passionate. And, of course, the fast thinker is more likely to make a catastrophic misjudgment.

The cause of peace is best served, Mr. Blattman concludes, through a mix of institutional constraints and slow thinking: “interdependence, checks and balances, rules and enforcement, and interventions.” Both Einstein and Freud looked forward, more in hope than expectation, to an effective role for international bodies. Mr. Blattman accepts that these institutions may have moral influence, but it is seldom decisive. Economic interdependence raises the cost of conflict and gives negotiators bargaining tools, but leaders who control oil and gas fields are largely unaccountable to their citizens. Financial punishment will sometimes bring vulnerable governments to the negotiating table, but sanctions are leaky, and it is hard to target only the right people. Mediators may build trust and facilitate discreet communication, yet they can only give a helping hand.

Almost at the very moment that “Why We Fight” was published, its conclusions were being put to a grim real-world test as Vladimir Putin’s Russia invaded Ukraine. Mr. Blattman’s list of war’s precipitating causes seems to fit the case well enough. The political opposition, the media—even Mr. Putin’s inner circle of generals and spooks—had been silenced. The Russian public was fed fake news. Wishful thinking took over. In thrall to a fantastic dream of a greater Russia, Mr. Putin miscalculated. He overestimated the fitness of his own armed forces and underestimated the resilience of his opponents. He was too confident that Russia’s natural resources and financial reserves would insulate his regime from sanctions. Will he now accept that he blundered, act rationally and cut his losses?

The terrible logic of war suggests that a genuine negotiation will begin only when both parties are forced to recognize that a stalemate has been reached. If Mr. Putin has to withdraw, other autocrats may rethink their options. But should he be able to claim a win, the demonstration effect could be catastrophic.

—Mr. Kuper is a fellow of the British Academy. His next book is “The Museum of Other People.”

Political Supreme Court takes away the rights of Citizens