by
Sandwichman
My articles My booksMy videos
Follow on:
Summary:
Afterword to the Second German Edition [of Das Kapital, Buch 1] (1873):I must start by informing the readers of the first edition about the alterations made in the second edition. One is struck at once by the clearer arrangement of the book. Additional notes are everywhere marked as notes to the second edition. The following are the most important points with regard to the text itself:In Chapter I, Section 1, the derivation of value from an analysis of the equations by which every exchange-value is expressed has been carried out with greater scientific strictness; likewise, the connexion between the substance of value and the determination of the magnitude of value by socially necessary labour-time, which was only alluded to in the first edition, is now expressly emphasised.Originally I


New Economics Foundation writes Levelling-up from the ground up

run75441 writes Healthcare Articles from My In Box

Mike Norman writes Money and Macro – REALLY!? The Dutch Economy is the Most Unequal? – a Response to Economics Explained

So, Whatever Happened To The Arizona Fraudit?

I must start by informing the readers of the first edition about the alterations made in the second edition. One is struck at once by the clearer arrangement of the book. Additional notes are everywhere marked as notes to the second edition. The following are the most important points with regard to the text itself:

In Chapter I, Section 1, the derivation of value from an analysis of the equations by which every exchange-value is expressed has been carried out with greater scientific strictness; likewise, the connexion between the substance of value and the determination of the magnitude of value by socially necessary labour-time, which was only alluded to in the first edition, is now expressly emphasised.

Originally I had intended to go through the unpublished "Chapter Six" of Capital before dealing with the originally published volumes. I must confess that in the meanwhile I became transfixed by what I was noticing in chapters one and three and so will get to "Chapter Six" in due course. 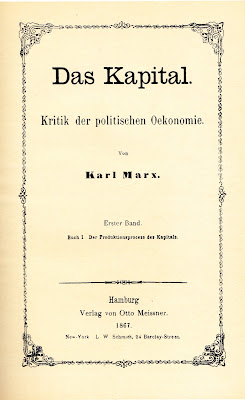 A careful reading of the above Afterword will note that Marx referred separately to exchange value and the magnitude of value. These are two different entities, which Marx made clear in section 1 of chapter 1: "exchange-value, generally, is only the mode of expression, the phenomenal form, of something contained in it, yet distinguishable from it." The magnitude of value is, generally, distinct from exchange-value. Why "generally"? Because money is an exception. The value of money and its expression in exchange value are indistinguishable, as Marx will make clear in chapter 3.
Right from the get-go, Marx tossed a grenade into the classical dichotomy of value in use versus value in exchange. Marx's socially-necessary labour-time theory-of-value is not a labour theory-of-exchange-value or even a labour-time theory-of-exchange-value.
So let's hear what the imaginary abstract socially average reader takes away from this dialectical bombshell: "use value bla-bla bla-bla exchange value murble murble labour time brr-zzz-zzz value..." Meanwhile, our average reader has begun to wonder just how many yards of linen it takes nowadays to buy a coat and what style of coat it would be. "Where can you buy a coat with linen, anyway?"
Value is not some "substance" of labour time "embedded" in the commodity. The substance of value is a quality, its use value, not a quantity. The magnitude of value of a commodity, comprising the quantity of labour time socially necessary for its production, is a historically specific social relationship between people represented as a relationship between things. A commodity is only an aliquot part of all the commodities of its type. Value is what society has evaluated it to be, nothing more and nothing less.
Exchange-value is something different than, but not independent of value. It is the mode of expression of value and its measure. But don't let the word "measure" fool you. The units on the measuring rod of money are not fixed. The same value magnitude that measures as $2 today might measure $2.10 or $1.90 tomorrow.

The total labour power of society, which is embodied in the sum total of the values of all commodities produced by that society, counts here as one homogeneous mass of human labour power, composed though it be of innumerable individual units. Each of these units is the same as any other, so far as it has the character of the average labour power of society, and takes effect as such; that is, so far as it requires for producing a commodity, no more time than is needed on an average, no more than is socially necessary. The labour time socially necessary is that required to produce an article under the normal conditions of production, and with the average degree of skill and intensity prevalent at the time.

In case this account of "labour time socially necessary required to produce an article" should strike us as a natural property of the article and not of the historical society in which its production is taking place, Marx placed a section at the end of chapter one explaining the fetishism of commodities.

The character of having value, when once impressed upon products, obtains fixity only by reason of their acting and re-acting upon each other as quantities of value. These quantities vary continually, independently of the will, foresight and action of the producers. To them, their own social action takes the form of the action of objects, which rule the producers instead of being ruled by them. It requires a fully developed production of commodities before, from accumulated experience alone, the scientific conviction springs up, that all the different kinds of private labour, which are carried on independently of each other, and yet as spontaneously developed branches of the social division of labour, are continually being reduced to the quantitative proportions in which society requires them. And why? Because, in the midst of all the accidental and ever fluctuating exchange relations between the products, the labour time socially necessary for their production forcibly asserts itself like an over-riding law of Nature.

"Like an over-riding law of Nature." Which is to say not a law of Nature but only seeming to be. Is it just me or doesn't "their own social action" seem a bit closer to a "revealed preference" than to an "embedded substance"?

Suppose two equal quantities of socially necessary labour to be respectively represented by 1 quarter of wheat and £2 (nearly 1/2 oz. of gold), £2 is the expression in money of the magnitude of the value of the quarter of wheat, or is its price. If now circumstances allow of this price being raised to £3, or compel it to be reduced to £1, then although £1 and £3 may be too small or too great properly to express the magnitude of the wheat’s value; nevertheless, they are its prices, for they are, in the first place, the form under which its value appears, i.e., money; and in the second place, the exponents of its exchange-ratio with money.

The form under which value appears, the expression in money of the magnitude of the value, is not the same as the magnitude of value. This is not a confusion on Marx's part or an obfuscation. It is a distinction -- and an important one. Value can only be produced in the sphere of production. It can only be realized in the sphere of circulation. There is thus an antagonism between production and circulation of commodities.

Lastly, suppose that every piece of linen in the market contains no more labour-time than is socially necessary. In spite of this, all these pieces taken as a whole, may have had superfluous labour-time spent upon them. If the market cannot stomach the whole quantity at the normal price of 2 shillings a yard, this proves that too great a portion of the total labour of the community has been expended in the form of weaving. The effect is the same as if each individual weaver had expended more labour-time upon his particular product than is socially necessary.

"The effect is the same as if..." In other words, each weaver did not actually expend more labour time than was socially necessary but the all the weavers collectively spent too much time. There were too many weavers. It is thus accidental whether the "transubstantiation" of the commodity's value into money can be accomplished at a price equivalent to its value. But it is not totally arbitrary. Otherwise people would soon stop producing for markets.

Recall that in these early chapters, Marx was dealing with simple commodity production and exchange. He was not yet concerned with buying of labour power and the extraction of surplus value. Or the equalization of profits, the tendency of the rate of profit to fall etc. etc. etc. But already at this primitive stage of analysis, the crucial distinction is made between the magnitude of value and its mode of expression in money. One of these things is not like the other.

In closing, I'm always wondering how many of the 70 or so hits these posts on snlt get are actual readers. 5? 3? I would be very happy with 12-16 readers. But I suppose if I have ONE attentive reader it should be enough.

My articlesMy books
Follow on:
Previous Has The Arab Spring Finally Come To A Full End?
Next K-12 Schools Opening In July