by
Sarah Arnold, Aidan Harper, Alfie Stirling
My articles My booksMy videos
Follow on:
Summary:
Publications The UK’s living standards crisis The case for a living income By Sarah Arnold, Aidan Harper, Alfie Stirling 17 June 2021 Download the report The UK is in the midst of a crisis in living standards. Too many people do not have reliable access to the resources they need to meet the day-to-day costs for a decent quality of life. This was true before Covid-19, but the pandemic and the associated economic downturn have seen things exacerbate over the past 12

Weekly Economics Podcast: how can we tackle the climate crisis while levelling up?

The road to recovery

The case for a living income 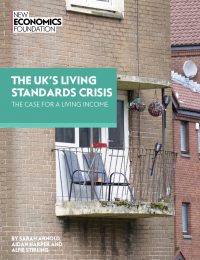 The UK is in the midst of a crisis in living standards. Too many people do not have reliable access to the resources they need to meet the day-to-day costs for a decent quality of life. This was true before Covid-19, but the pandemic and the associated economic downturn have seen things exacerbate over the past 12 months. New forecast modelling produced for this report shows that by the end of the year, and without a change in government policy, 32% of the UK population – 21.4 million people – will be living below a socially acceptable living standard, as measured by the Minimum Income Standard (MIS). The MIS, the UK’s only needs-based approach to measuring living standards, identifies what needs must be met for an individual to thrive in the society in which they live.

The effects of the Covid-19 pandemic followed a decade of stagnant growth in real earnings; rising housing costs for renters; and freezes, cuts, and caps to working-age benefits, particularly those received by families with children. This served to hold down the living standards of the poorest, while widening inequalities across the population as a whole, making the UK an international outlier on poverty – the extent to which the poorest families fell below the poverty line was the second highest among 37 members of the Organisation for Economic Cooperation and Development (OECD). Across the two decades leading up to 2020, the poorest 10% of families saw their income grow by just 3% after housing costs – six times slower than the average. As a consequence, nearly three in ten people were already living in households with incomes below the MIS, even before the pandemic began.

But the pandemic has greatly accelerated this crisis of inequality and living standards. Extended lockdowns have prevented people from working for months on end, and despite large numbers of jobs being supported through the furlough scheme, there has been a significant toll on employment and earnings. As a consequence, the number of people relying on the social security system to help make ends meet has increased significantly, with the numbers claiming universal credit more than doubling from 2.8 million in January 2020, to an estimated 5.9 million in January 2021.

Despite a temporary uplift to the main element of universal credit of £20 a week, more people were living below the MIS in April 2021 than when the pandemic started. This is because the UK’s social security system fails comprehensively to provide an adequate income floor. It is weak by both international and historical standards. The UK safety net has one of the lowest replacement rates – the proportion of previous income restored by out-of-work benefits – of any of the 37 advanced economies in the OECD. And even with the £20 uplift, families relying on welfare will be £10.5 billion worse off at aggregate than would have been the case had the 2010-11 system still been in place.

New modelling presented for this report shows that the core problem is twofold: first, unprecedented numbers of people are set to fall below a socially acceptable standard of living by the end of this year; and second, the extent of the income shortfall for those families is extremely large. Beneath the headline finding of nearly one in three people in the UK living below the MIS, we find the following:

The evidence across time shows that high and rising numbers of people falling below the level needed to ​‘thrive’ – and instead, living in situations where they are either ​‘destitute’, ​‘struggling’, or only just ​‘surviving’ [adapted from levels as defined by the Joseph Rowntree Foundation – contributes to four dimensions of wider societal harm.

In response, NEF is calling for a new ​‘mission’ on living standards for the 2020s, bringing together multiple areas of government policy as part of a new social guarantee. As part of this agenda, we are calling for the creation of a new social security system, or living income, alongside policies to support higher-paying and more secure work and to expand public service provision.

This report is the first in a new programme of research that will go on to examine the goals and design of a living income for the 2020s, the details of which will be developed in collaboration with our partners and set out in subsequent reports. At its core, we argue that the living income should be built around principles of alleviating poverty, reducing inequality, supporting economic stability, and increasing resilience. Central to this will be a new emphasis on adequacy, where the level of payments and support is calibrated against what people actually need to have a decent quality of life. We anticipate this will require both the expansion and strengthening of universal payments in the system as well as stronger needs-based payments for parenting, unemployment and disability.

My articlesMy books
Follow on:
Previous Living Income campaign and website launched
Next Not the right time to get pumped up about inflation

We can win a decent standard of living for everyone