by
Rebekah Diski, Alex Chapman, Chaitanya Kumar
My articles My booksMy videos
Follow on:
Summary:
Publications Powering the just transition Putting workers and unions at the centre of industrial change in Yorkshire and the Humber By Rebekah Diski, Alex Chapman, Chaitanya Kumar 09 June 2021 Download the report The UK faces an uneven decarbonisation challenge, with some regions and industries under particular pressure to reduce emissions. Many of the places and communities most acutely affected are also the least equipped to shape transition plans that deliver a good

run75441 writes A “Summer Rerun – The Victory of Privilege”

Sandwichman writes I am invisible

Greening finance to build back better 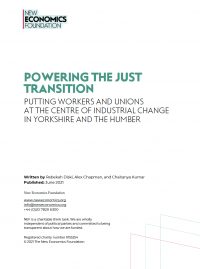 The UK faces an uneven decarbonisation challenge, with some regions and industries under particular pressure to reduce emissions. Many of the places and communities most acutely affected are also the least equipped to shape transition plans that deliver a good deal for workers.

Yorkshire and the Humber has suffered from decades of industrial decline, but it still relies disproportionately on carbon-intensive industries including steel, cement, chemicals, energy generation, and food and drink production. We find that around 360,000 jobs – 15% of all jobs in the region – are in sectors that have high or very high emissions, meaning that these jobs are likely to be affected by the move to a low-carbon economy. According to recent research from the Grantham Institute, 260,000 workers across the region have skills that will be in low demand in a low-carbon economy and therefore must upskill or retrain or risk being left behind.

Workers and trade unions are understandably sceptical of the rhetoric around transition, given that past transitions – notably the decline of mining and manufacturing – have scarred communities and left a trail of social and economic destruction in their wake. This time must be different. The layers of distrust that often characterise inter-regional, inter-movement, and industrial relations must be peeled back by a concerted effort to make this transition fair.

This report gives an overview of the challenge of ensuring a just transition to a low-carbon economy – that is to say, an industrial transition that empowers workers and communities through the process itself – in Yorkshire and the Humber. We review the current status of industry and associated emissions and consider what the climate emergency – as declared by many of the region’s local authorities – might mean for workers. Many workers are in crucial industries that should be protected and helped to decarbonise while others may need to be retrained and supported into different sectors. After almost a year of Covid-19 restrictions, unemployment in Yorkshire and the Humber was 20% higher than the year before. A just transition as part of a green recovery could provide decent, secure work for people moving out of carbon-intensive industries as well as those at the sharp end of the pandemic, often more marginalised workers. An inclusive, just transition is an opportunity to address inequality in the labour market that leaves some – often women and racialised groups – more exposed to low pay, poor conditions, and precarious work.

This is not an exhaustive analysis of the various paths to a low-carbon economy. As we argue throughout, decarbonisation plans and local industrial strategy must be co-designed with workers and communities. We look at the scale of the challenge across the highest emitting industries and at current plans to cut emissions. We also propose recommendations to make the process of transition more inclusive, as well as ideas for increasing the availability of good quality jobs.

We then discuss the risks of relying on industry-led initiatives, which bet heavily on ​‘techno-fixes’ such as carbon capture and storage (CCS) rather than a transformative, economy-wide approach informed by workers and communities. We argue that technological innovation in particular industries will be important, but we must focus on creating new good, green jobs that can reduce emissions now. A just transition is an opportunity to adapt and protect jobs, but also to create thousands more in the range of sectors needed in a more equitable and low-carbon future.

To demonstrate how industries face different just transition challenges, we use three case studies: the steel industry, which needs urgent support to decarbonise and retain jobs producing the material needed for low-carbon infrastructure; aviation, which faces the triple threat of climate change, automation, and the long-term impact of Covid-19; and public transport, where opportunities to expand and improve the quality of inherently green jobs are at risk. We undertake further research to build evidence for a just transition and highlight ways of generating new good, green jobs that are accessible to all.

This report has been informed by 12 in-depth interviews and several wider meetings with union officials and workers from sectors that are likely to be affected by the transition in various ways, from bus drivers to steelworkers. A key theme was that workers were being left out of the conversation. They felt that decision-makers should urgently include workers to ensure their support but also because, as those closest to the work, they could actively contribute to developing various transition pathways. This supports NEF’s longstanding argument that ​“the currency of a rapid and consensual transition is trust.”3 Rebuilding trust requires concrete action to make the just transition a reality. While the precise shape of plans should be the subject of careful and place-specific co-design, we propose some ideas we think are fundamental to the process.
Plans should:

My articlesMy books
Follow on:
Previous We don’t need cuts to pay back pandemic debt
Next Preparing for a just transition in Yorkshire and the Humber