by
New Economics Foundation
My articles My booksMy videos
Follow on:
Summary:
Publications Under the radar Exploring the changing picture of poverty and low income in the Surrey borough of Elmbridge By Daniel Button 03 November 2022 Download the report This report uncovers pockets of rising poverty in Elmbridge. In the aggregate, the borough ranks highly on a range of indicators – from levels of employment to income. Poverty and disadvantage, however, exist under the radar. Growing numbers of children live in low-income households, and an increasing majority 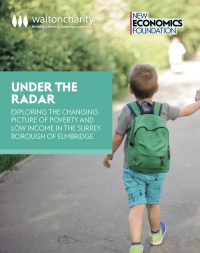 This report uncovers pockets of rising poverty in Elmbridge. In the aggregate, the borough ranks highly on a range of indicators – from levels of employment to income. Poverty and disadvantage, however, exist under the radar. Growing numbers of children live in low-income households, and an increasing majority of these are working households. With the cost of living increasing, and wages failing to keep up, some residents are facing a range of hardships resulting from an inability to make ends meet: from inadequate housing conditions to food poverty and poor wellbeing.

Elmbridge has pockets of poverty that are growing…

Borough-wide, there are fewer low-income residents than in many other areas of England. Digging under the surface, however, reveals that Elmbridge has pockets of poverty and low income as well as signs that the situation has worsened in recent years.

Levels of child poverty, for instance, are low in the aggregate, but higher in particular wards. In 2021, 6.5% of children were in relative poverty Elmbridge-wide, compared to 15% in the Moseley West ward of Elmbridge specifically. Whatsmore, child poverty has been increasing at a faster rate in those parts of Elmbridge that were already poorer. Since 2015, relative child poverty grew by 1.7% across Elmbridge. In the same period, Moseley West saw a 4% increase in child poverty.

While Elmbridge is a pleasant place to live on several fronts, it has hidden challenges. Despite perceptions, poverty and low income sit under the radar.

…while the cost of living is rising

Elmbridge is an expensive place to live, with essentials such as housing and childcare costing more than in many other parts of the country. It is likely, therefore, that poverty statistics will not capture all of those struggling to make ends meet locally.

This is not a new issue. The borough has been expensive for some time, but matters have worsened in recent years as the price of essentials continues to outpace wages. Median house prices, for example, have grown to over 14 times median earnings, and rents are correspondingly high. The median rent on a two-bedroom property is now over 40% more than the national median.

Inflation and the rising cost of utilities and food, while not unique to Elmbridge, are placing extra pressure on already stretched household resources. Residents cite large increases in their energy bills and weekly shop and are having to decide who to pay and who not to pay in a given month. This is severely affecting the ability of both those below the official low-income threshold, and some of those above it, to stay afloat. Those who were previously just about managing are now struggling to make ends meet.

Trends over the last few years have left residents more exposed to these rising costs, not least the increasing rates of in-work poverty. The majority (75%) of families with children living in poverty in Elmbridge are working families.

While wages are higher on average than elsewhere, there is a problem with hours, especially for parents, due to the cost of childcare. Parents face a stark choice: sacrifice hours and earnings to avoid paying sky-high care fees or work longer hours and lose extra earnings to care costs. For single parents, in particular, this acts as a poverty trap with few routes out.

There is also a higher pay gap in Elmbridge. For those at the sharp end of this gap, earnings are insufficient to meet the high cost of living locally. A single parent with two children, for example, would need to be earning over £45,000 per annum to meet what the public think is a socially acceptable, minimum standard of living locally. They would need to be in the top 50% of earners in Elmbridge to achieve this standard.

Finally, while rates of unemployment are declining after a large spike during the pandemic, the number of Elmbridge residents claiming unemployment-related benefits is still over 27% higher than pre-pandemic levels, with those aged 20 to 34 claiming at a higher rate than any other group. For households without a wage from work, support from universal credit and other benefits falls far short of what is needed for a socially acceptable standard of living.

Low income is taking its toll, but there is much that can be done

Those without enough to make ends meet face a range of hardships. Residents are putting up with inadequate housing conditions, while the high cost of rent and utilities means there is little left for other essentials, including food. Residents are increasingly relying on food bank support, skipping meals, and going hungry. Expenditure, beyond the day-to-day, is hard to keep up with, and so trips to the dentist, optician, and hairdresser are being missed while broken household items remain unfixed. The stress of life without adequate means is taking its toll on wellbeing and mental health.

Despite the challenges of life on a low income in Elmbridge, there is much that local people and organisations can do by working together to ensure that the borough is a better place to live for everyone, from social action and service delivery to campaigns and advocacy to affect policy change. Drawing on the views of residents, we recommend spreading awareness of pre-existing support with the cost of living, extending support to cover childcare fees and taking additional measures to bring down the cost of care, developing opportunities for residents to grow their employment skills and experience, exploring the possibility of a Surrey wage weighting scheme, and advocating for action to increase the stock of truly affordable housing in Elmbridge.

My articlesMy books
Follow on:
Previous New Economics Podcast: How we win a new economy – fighting for our human rights
Next Europe’s fiscal framework – the people’s view?