by
New Economics Foundation
My articles My booksMy videos
Follow on:
Summary:
Publications Green credit guidance A green term funding scheme for a cooler future By Lukasz Krebel, Frank van Lerven 02 September 2022 Download the report The Bank of England’s policy toolkit needs urgent updating in light of the climate and cost of living crises. There are multiple interest rates across the economy that may need to be targeted separately to achieve monetary and financial stability and wider ecological and democratically defined goals. With the

New Economics Podcast: How we win a new economy – a hot strike summer?

A green term funding scheme for a cooler future 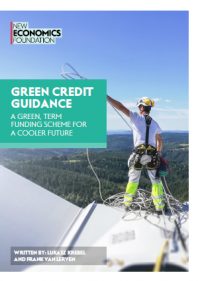 The Bank of England’s policy toolkit needs urgent updating in light of the climate and cost of living crises. There are multiple interest rates across the economy that may need to be targeted separately to achieve monetary and financial stability and wider ecological and democratically defined goals. With the bulk of macroeconomic demand management relying on a blunt single interest rate tool, green targeted credit policy interventions would enable the Bank to better realise its price and financial stability objectives and could help it better reflect the importance of environmental sustainability and the transition to net zero, as recently mandated by the UK government.

While important policy reforms were made after the 2008 Global Financial Crisis (GFC), these reforms did not address the banking sector’s tendency to inappropriately allocate credit. With the bulk of financial flows flowing to assets in the property and finance sector, UK bank lending is not geared towards supporting the real economy and vital strategic investments. Only 2% – 5% of bank lending post-GFC and pre-pandemic went to small and medium enterprises (SMEs), which are responsible for 60% of UK private sector jobs, while 40% of gross domestic product (GDP) is derived from SMEs. Changes to a single blunt interest rate tool alone may be a very inefficient way of influencing real activity and aggregate demand, making it difficult for the Bank to reach its price stability objective.

At the same time, the credit allocation of the banking and financial sector is fundamentally misaligned with a low carbon transition. The UK approach has focused on disclosures modelled on the Task Force on Climate-Related Financial Disclosures (TCFD) and has failed to meaningfully shift credit flows. The Bank’s policy tools are currently not designed to help address the goals of the green transition or mitigate climate-related systemic sources of monetary and financial instability. The UK banking sector has pumped over £277bn ($364 bn) into fossil fuel projects since the Paris Agreement was signed in 2015, and Barclays is Europe’s dirtiest bank. Meanwhile, Office for Budget Responsibility (OBR) estimates suggest private sector investment must exceed £30bn (2019 prices) of additional green investment over the next three years – a 10% increase on current private sector levels of investment. To put the challenge of the green investment gap into context, UK private sector investment grew by roughly 0% in the three years leading up to the pandemic. The speed and scale of filling the private sector’s green investment gap require transformational financial incentives from the Bank. Indeed, a failure to curb dirty financial flows and fill the green investment gap would exacerbate the materialisation of climate-related financial risks and result in sharp price adjustments. Taking action, therefore, falls squarely under the Bank’s monetary and financial stability remit.

The Bank’s main policy instruments may also need a reboot in light of the changing macroeconomic landscape. Spikes in energy costs, particularly fossil gas, and other supply-side bottlenecks are the major drivers of rising inflation. Simply increasing the main policy rate will do little to stave off external and supply-induced price rises. Instead, rate rises could dis-incentivise new green investments that have notoriously large upfront costs and thus face higher funding costs, when compared to fossil fuel alternatives with relatively low upfront costs. In which case, rate rises could reinforce the UK’s carbon lock-in and its dependence on volatile fossil fuels pricing. To reduce exposure to future price shocks driven by fossil fuels, as well as to mitigate climate-related transition risks, monetary policy could adjust to accelerate green investments, such as energy efficiency and renewable generation. A targeted credit policy framework that keeps interest rates low for green investments, but allows a higher rate for other economic activities, would help introduce more appropriate price dynamics.

Indeed, the Bank would hardly be reinventing the wheel. Historically, targeted credit policy interventions by central banks were the norm, not the exception. Such policies played an important role in supporting economic and industrial policy during the 1945 – 1973 ​‘golden age’ in the West, and more recently in aiding the rapid development of East Asian countries. During the last decade, the Bank began temporarily targeting cheap credit to businesses and households across the UK in the form of the Term Funding Scheme (TFS). We propose that the Bank, with support from the Treasury, simply greens the TFS, makes it permanent, and scales it up. Most recently, the Bank of Japan and the People’s Bank of China took a lead in greening their targeted credit policy measures in the form of refinancing operations providing cheap credit to banks to lend for sustainable investments. While fiscal policy must lead the way on the green transition and a more interventionist credit policy is hardly a green silver bullet, following the example of its Asian counterparts will help the Bank to reach its primary price and financial stability objectives, and ensure it does so in a way that reflects the importance of environmental sustainability and the transition to net zero.

1. Repurpose the Bank of England’s existing Term Funding Scheme (TFS) to set up a permanent green TFS. The TFS offers cheap funding – at or close to the Bank rate – to banks for lending on specific conditions to households and firms. The Bank could build on this monetary innovation, and offer zero or negative real interest rates for green activities while keeping its main policy rate in positive territory. As an illustrative example, the Treasury and the Department for Business, Energy & Industrial Strategy (BEIS), representing the elected government, could advise the Bank to start by targeting energy efficiency retrofits, clean energy activities, electric vehicles, and charging stations; and lowering borrowing costs for households and SMEs. Once the UK Green Taxonomy is implemented, the green TFS could also be used to target a range of other green-defined activities.

2. The existing TFS should be decarbonised, starting with the most harmful sectors, to ensure the Bank is not implicitly subsidising banks to lend for fossil fuel and carbon-intensive activities. This means banks should not be allowed to put up dirty collateral for cheap funding, nor should banks lend for dirty activities. The Bank could build on the framework it developed for greening its Corporate Bond Purchase Programme for identifying polluting assets and applying science-based exclusions.

3. The TFS already comes with the condition that banks demonstrate they are expanding their lending to firms and households. The lower cost of funding for a green TFS would need to come with additional conditionality:

a. Banks must evidence that they are expanding their lending for the desired sectors and activities. For example, for retrofitting loans, improvements in energy efficiency could be assessed using Energy Performance Certificate (EPC) ratings.

b. Banks must show that they are passing on a minimum interest rate reduction to their customers (such as following the precedent of pre-determined interest rates under the coronavirus Bounce Back Loan Scheme).

4. Develop bank lending metrics and targets on progress in shifting the UK financial sector to be Paris aligned. While the Bank’s financial stability and monetary policy remits have been updated to account for climate change, there are no metrics or targets to hold the Bank accountable for greening the financial system. The green TFS could be specifically calibrated towards reaching annual quantitative targets in green financial flows specifically to fill the green finance gap.

5. Extend the TFS to UK state-owned investment banks – the UK Infrastructure Bank and the British Business Bank. These banks could either: i) on-lend credit to the UK alternative banking sector (ie credit unions, community development financial institutions (CDFIs), building societies) that currently may not have access to the TFS, and/​or 2) lend directly to transition activities and small businesses.

While waiting for the green taxonomy, financing improvements in building EPCs could be used as green criteria for bank lending. The Treasury or BEIS could advise the Bank to extend eligibility to other verifiably green investments, such as solar panels, domestic wind turbines, and heat pumps.

The interest rates for the TFS green credit lines to banks could be set at 0%, or in all cases below the Bank rate, to ensure lower costs of green credit. The refinancing rate could be made negative (echoing the European Central Bank (ECB)) on the condition that commercial lenders pass on a minimum predefined rate discount to retrofit borrowers – for example, by offering loans to households and businesses at 0% interest. To push interest rates on retrofitting loans towards zero, a combination of a negative interest rate charged under the green TFS to banks, and partial loan guarantees by the Treasury (similar to the pandemic schemes) could be used.

Compared to borrowing on a prevailing (as of February 2022) 6.14% rate on private unsecured loans, a household borrowing £10,000 for six years at a 0% interest rate would save £1,980 in total repayments. Additionally, targeting loans at 0% to borrowers would imply a negative real terms (after inflation) interest rate. Assuming that inflation follows the Bank’s May 2022 forecast, a household borrowing £10,000 under a scheme beginning in 2023 would, over an illustrative six-year term, end up paying £730 less in real terms than the initial amount borrowed.

If the green TFS funds were offered at a negative rate, the Bank and the Treasury should agree on a new framework for managing the Bank’s balance sheet, with a long-term view on utilising it to support society’s goals while preserving monetary stability.

My articlesMy books
Follow on:
Previous Green credit guidance
Next New Economics Podcast: How we win a new economy – the end of neoliberalism?