by
New Economics Foundation
My articles My booksMy videos
Follow on:
Summary:
Publications NEF review of the year 2022 Highlights from the last 12 months 19 December 2022 Download the review It’s been a difficult year for most of us, with bills skyrocketing, public services crumbling and the impacts of climate breakdown being felt across the world. We’ve been working hard in 2022 to highlight the inequalities in our economy and – even more importantly – to lead the way in advocating for a fairer, more prosperous and greener society. Now we’re delighted to share our Review of the Year where you can read about the


Ken Melvin writes Oh The Cost Of It

Highlights from the last 12 months 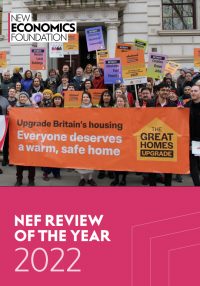 It’s been a difficult year for most of us, with bills skyrocketing, public services crumbling and the impacts of climate breakdown being felt across the world. We’ve been working hard in 2022 to highlight the inequalities in our economy and – even more importantly – to lead the way in advocating for a fairer, more prosperous and greener society. Now we’re delighted to share our Review of the Year where you can read about the exciting progress we’ve made towards our key missions. There’s lots to celebrate but here are our top ten highlights:

NEF has continued to campaign for an ambitious reimagining of our social security system. Last week we published a new report, The National Living Income, which sets out how we can guarantee a decent minimum income for all. We were delighted to see our analysis covered on Peston, in the Guardian, Independent, Daily Mirror, Daily Mail, Daily Express and Evening Standard. We also held a launch event in Parliament to an audience of MPs and experts.

We made solid progress in our campaign for a mass programme of home insulation to keep families warm, cut energy bills and end our reliance on fossil fuels. In the Spring Statement, we secured a key demand when VAT on retrofit measures was cut to 0%. Then in November the government committed an extra £1bn to home insulation. There is a lot more this government should be doing to ensure our homes are of a decent standard, but with the Labour and Green parties already endorsing our proposals, we’re hopeful for the campaign.

3. Homes for us: because we all need somewhere safe and comfortable to call home

We launched Homes for Us — a new campaign to end the housing crisis by building three million new social homes by 2040. Our kick-off summit in May was attended by more than 30 organisations from the housing movement, from local tenants groups to national bodies, where we agreed on the campaign’s core demands. We’ve since been campaigning for a social rent freeze.

The scale and severity of the cost of living scandal requires bold policy solutions. We developed a new, innovative proposal for universal basic energy which would give everyone a level of free or very cheap energy, alongside a new energy element in universal credit. Our ideas generated attention from policymakers and the media — gaining coverage in publications from the Financial Times to the Guardian.

5. Influencing the levelling up agenda

NEF and our partners secured some notable wins in the government’s levelling up white paper published this year — including a strong focus on devolution and nods towards community wealth being. But there is still a long way for the country to go, as our research in February highlighted: 60% of the country still needs to level up, and the cost of living crisis is making things worse. Our calls for a major shift in policy to deliver prosperity across the UK were backed by six metropolitan mayors.

6. Green finance for the future

We’ve continued to be an influential voice on the subject of green finance — particularly at the Bank of England as it redesigns its qualitative easing programme. Moreover, our report making the case for a tiered monetary policy framework generated interest among leading economists and was covered in the Financial Times and the Economist.

NEF’s work played a significant role in stopping the expansion of Leeds Bradford Airport. We supported local campaigners with our analysis showing that the climate damage from planned airport expansions around the country would cost the public £62bn. We are continuing to build our expertise in this area and have set up a new section on the NEF website bringing together our resources for campaigners fighting airport expansion.

8. Local economies that work for people and planet

Local authorities have the power to build fairer, more sustainable economies — and we’ve been supporting them to do it. From our work with Greenwich Council on their economic development strategy to helping Wakefield Council with a project on a wellbeing economy, this year we’ve helped shape local economies so they work for people and the planet.

From a Nobel Laureate in economics to campaigners supporting their communities through the cost of living crisis, we’ve brought together some exciting speakers for our events this year. In February we explored how the cost of living and climate crisis are connected, in March we looked at reshaping finance to support net zero and in June we hosted an online rally against the cost of living scandal.

We celebrated the 200th episode of our podcast, which has now had more than 2.5 million listens. This year we ran a special series on how the UK is being torn apart — and how campaigners are fighting back, with episodes on issues from strikes to social housing to our human rights.

Cyber Warfare Is Getting Real: The risk of escalation from cyberattacks has never been greater—or the pursuit of peace more complicated