How to Achieve Shorter Working Hours

by
Robert Skidelsky
My articles My books
Follow on:Twitter
Summary:
I have great pleasure in presenting this report on shorter working hours, which John McDonnell asked me to prepare, and which I have written with the valuable assistance of Rachel Kay. I accepted John’s invitation because shorter working hours is something I believe in. In fact, I wrote a book with my son, How Much is Enough?, which made the case for reducing the burden of work as part of the good life. The philosophy of this Report is quite simple. The advance of technology – the replacement of human effort by machine effort – should enable hours of socially necessary work – work needed to earn a living – to fall. Quite simply, machines will do more and more of that work. This has been happening ever since the Industrial Revolution got going. In 1870 people in Britain worked on


Robert Skidelsky writes The Monetarist Fantasy Is Over

The Monetarist Fantasy Is Over

For a public sector job guarantee 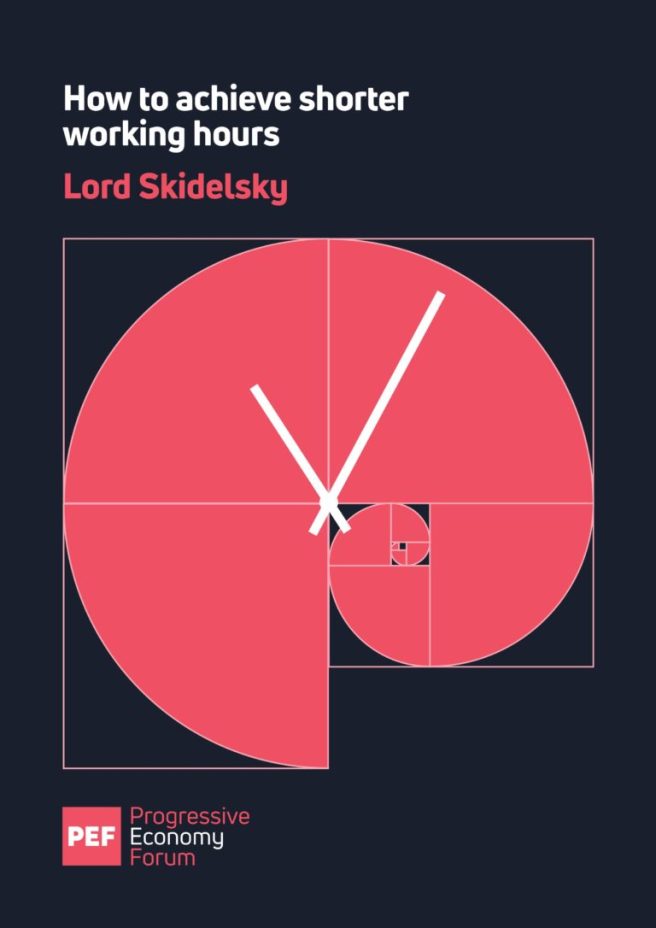 I have great pleasure in presenting this report on shorter working hours, which John McDonnell asked me to prepare, and which I have written with the valuable assistance of Rachel Kay.

I accepted John’s invitation because shorter working hours is something I believe in.

In fact, I wrote a book with my son, How Much is Enough?, which made the case for reducing the burden of work as part of the good life.

The philosophy of this Report is quite simple. The advance of technology – the replacement of human effort by machine effort – should enable hours of socially necessary work – work needed to earn a living – to fall. Quite simply, machines will do more and more of that work.

This has been happening ever since the Industrial Revolution got going. In 1870 people in Britain worked on average 60 or more hours a week. Today it is little over 40.

So the question is: why not just allow the natural process of hours reduction to continue? Why do we need a ‘policy’ on hours?

The answer is that since the 1980s hours of work have stopped falling: they have remained stuck at just over 40 hours a week. Yet between 1980 and 2014 productivity – output per hour worked – grew by almost 2% a year.

Recent analysis by the New Economics Foundation suggests that had average hours of work continued to fall in line with the post-war trend from 1945 to 1979 we would currently have an average full-time working week of around 34 hours, not 42.5, and would be on course for a 30 hour week by 2040.

So what’s been happening? Productivity up nearly 70% since 1980, hours of work almost the same.

As we looked at the problem we discovered one very important fact. Productivity growth does not cause hours of work to fall; it enables them to fall. Whether they fall or not depends on other factors.

Let’s assume, which I think is reasonable, that people haven’t got a lot greedier since 1980. An increase in greed could, of course explain why hours of work have stopped falling – people are using their higher incomes to consume more rather than cut down on their work effort.

Of course, people do want to more goods and services, but in the past they have also wanted to take advantage of higher incomes to work less. It is the weakening of the impulse to work less that is striking.

What we found was that in the past the push for both higher wages and shorter hours came from a combination of government and trade unions.

The government’s part was to maintain full employment. Between 1945 and 1975 unemployment was less than 2% a year. In short, government created a situation in which labour was relatively scarce.

This increased labour’s bargaining power. Trade unions were in a position to negotiate deals with employers, aimed at securing for workers the fruits of productivity gains in the form of higher real wages and shorter hours.

Shorter hours, that is, were the result of policy from the top and pressure from below.

Figure 2 on p.19 of the Report gives a good example of the double pressure in action, as well as highlighting the effect of the two world wars. The large fall in hours worked between 1919 and 1920 was the direct result of wartime full employment and trade union growth. You see the same double push in the 1940s.

Since the 1980s these levers for hours reduction have been broken. Government has abandoned full employment and union power over the wage bargain has been weakened. As a result hours of work have stopped falling, inequality has risen, and the gains from productivity growth have gone increasingly to employers. The same process is set to continue with automation.

Hence the need for intervention to break into the circle of stagnant real wages and flattening hours of work.

The first is the reinstatement of full employment as a goal of policy. The aim would be to make labour relatively scarce. Neither productivity growth, real wage growth, nor reduction in hours can be built on cheap labour supplies.

However, this is not a plea to go back to the Keynesian demand management of the 1950s and 1960s , which ran into severe problems. We propose that full employment policy should be pursued by means of a Public Job Guarantee. Put simply, the government as ‘employer of last resort’ should guarantee a job or training to any job-seeker who cannot find work in the private sector, at a fixed hourly rate which should not be lower than the national living wage rate.

If this policy were implemented, it would mean that for the first time since the Industrial Revolution there would no longer be a ‘reserve army’ of the unemployed and underemployed to force down wages and push up hours of work. I refer you to pp.44-45 of the Report for a discussion of the advantages and possible snags in this proposal.

Second, the government should use its position as public employer to invest heavily in the automation and reorganisation of working practices in the public sector, so as to enable a phased reduction of hours to 35 hours a week over ten years for all public sector workers.

In short, we call for a reversal of the policy of starving the public sector in the interests of so-called ‘sound finance’.

With sufficient, well-targeted investment, the public sector could once again become a genuine public service, an object of pride to its employees, and of satisfaction to its users, a standard setter for the economy.

Moreover, the public sector is the main sector of the economy where policy from above can be combined with pressure from below. The reason is that, together with the recently privatised public utilities, it is the one remaining heavily-unionised sector of the British economy. Reduction of hours would be achieved through negotiations between the government as employer, the managers and professionals, and the trade unions on how best to achieve efficiency gains and how to split them fairly between all the different ‘tasks’ performed by public sector workers.

Thirdly, government should use its procurement leverage to promote automation, training and hours reduction in the private sector.

Finally, it should aim to fill the vacuum left by the demise of collective bargaining by establishing social partnership forums to bring employers, employees, unions, and government into dialogue with one another over issues of pay, working time, automation, and insecurity. It’s particularly important to ensure that automation, which should be a boon, does not lead to ‘technological unemployment’, and the multiplication of precarious, dead-end jobs.

The spirit in which I have approached my task is summed up in the last paragraph of the Report:

‘Policy should keep constantly in mind the goal of reducing ‘necessary’ labour effort. This, rather than unlimited consumption, was the chief promise of mechanisation. Material wealth is the means to a better life, not the better life itself. We have made the growth of GDP an end in itself-an offence to the gods, but also to the planet whose trustees we are’.

You can download a copy of the report here:
How to achieve shorter working hours

Keynesian economist, crossbench peer in the House of Lords, author of Keynes: the Return of the Master and co-author of How Much Is Enough?
My articlesMy books
Follow on:Twitter
Previous Letter: The UK’s failing economic model demands such bold ideas
Next Placido Domingo: cancel culture?