Home / The Angry Bear / The Post Office in a Decent Society

by
run75441
My articles My books
Follow on:
Summary:
Mark Jamison’s commentary on USPO matters have been featured at Angry Bear Blog a number of times. A retired postmaster, Mark Jamison serves as an advisor, resident guru, and a regular contributor to Save the Post Office. Mark’s previous posts concerning the USPO can be found here at “Save The Post Office” or by doing the search function at Angry Bear. Mark can also be contacted on USPO matters [email protected] In looking at the results of the recent lawsuits against the Postal Service — eight of which have led to rulings banning changes in postal operations until after the election — it is tempting to make a bad sports analogy.  After all, going 0 for 8 in the courts lends itself to comparisons with the futility we often associate with the worst

Dan Crawford writes The Democrats’ problem in the Senate, explained 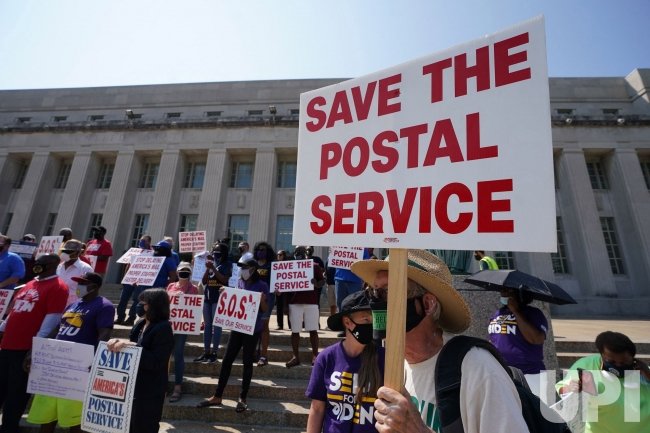 Mark Jamison’s commentary on USPO matters have been featured at Angry Bear Blog a number of times. A retired postmaster, Mark Jamison serves as an advisor, resident guru, and a regular contributor to Save the Post Office. Mark’s previous posts concerning the USPO can be found here at “Save The Post Office” or by doing the search function at Angry Bear. Mark can also be contacted on USPO matters [email protected]

In looking at the results of the recent lawsuits against the Postal Service — eight of which have led to rulings banning changes in postal operations until after the election — it is tempting to make a bad sports analogy.  After all, going 0 for 8 in the courts lends itself to comparisons with the futility we often associate with the worst teams and players. But to do so trivializes matters of the gravest civic importance.

The lawsuits have been initiated to preserve our right to vote and do so in a way that preserves our health and safety during a pandemic. They have also served to highlight the politicization of a national asset and institution, one whose mission embodies the concept of one nation through the provision of universal service.

The Postal Service has repeatedly lost in court because there is no argument that can defend the clownish tenure of Louis DeJoy and the overt politicization of an infrastructure that should be totally nonpolitical by Robert Duncan and the other members of the Postal Board of Governors.

Duncan continues to serve as a director of a super PAC dedicated to electing Republican candidates to the Senate. Whatever insights or advantages Duncan’s experience might bring to the operations of the Postal Service, they are more than offset by his utter lack of respect for the institution. His continued partisan position during a contentious election in which the Postal Service is playing an essential role is inexcusable. A person with any sense of civic duty or public propriety would have stepped aside long ago.

But this is what we have come expect from the Trump Administration. From when he first started tweeting and commenting about the post office, his remarks have been not only ill-informed but aggressively ignorant. They arose not from a sense of managing a public institution to the best advantage of the American people but from petty personal grievance.

Then, as it became obvious that voting by mail was going to be an integral part of the coming election, the president went off, as he so often does, on a self-indulgent, self-interested rant designed to undermine confidence in the electoral process. Despite the fact that instances of voting fraud are vanishingly few and even fewer with respect to mail voting, the president continued to berate, bully and incite. At a time when this country needed to come together, he sought to drive us farther apart, and worse, he did so for his own ego and advantage.

The post office has been a political football for a long time, perhaps since its beginnings. Over the past couple of generations, it has served as a prize in the tug of war between those who would return this country to a Gilded Age mentality of corruption, monopoly, and economic greed and those who believed that the economy and markets worked best when they were inclusive, spreading opportunity widely through the use of universally accessible infrastructures. Since the Postal Accountability and Enhancement Act of 2006, it has become evident that postal policy was headed in a direction that viewed privatization and diminishing public utility as the preferred route.

Louis DeJoy isn’t the first PMG whose wrongheadedness and commitment to bad ideology harmed postal infrastructure. Both Jack Potter and Patrick Donahoe did considerable damage in their attempts to “modernize” the Postal Service. Both should have known better since, unlike DeJoy, they came up through postal ranks and should have had more respect for the institution and in its role as a national asset.

Louis DeJoy is the obvious consequence of fifty years of questionable and outright bad postal policy. Instead of developing its network, expanding its utility, preserving good jobs and improving workplace conditions and morale, and focusing on providing an essential service to the American people, there has been a drumbeat for downsizing, worksharing, and privatization.

The word “economy” comes from the Greek oikonomia, meaning household management, yet somehow the idea of our national economy has become twisted up with ideas of narrowed profit and advantage. We’ve come to focus on Wall Street not Main Street. While it may seem trite to say that, it holds a key to understanding why some folks thought carving up the postal network into profitable little chunks was preferable to sustaining a national infrastructure that provided access, opportunity, and social and economic cohesion.

From Jack Potter’s 2002 Transformation Plan to the most recent presidential task force to Mr. DeJoy, discussion about postal reform has been dominated by an increasingly open and cynical view that eliminating postal jobs with middle class wages and secure benefits is the key to unlocking profits and creating a “sustainable” Postal Service. Yet every effort in this direction manages to degrade not only jobs but also service and network reach. Thankfully and belatedly, we seem to be discovering the futility involved in dismantling an institution that is beloved by the American public.

I’m not a big fan of the “heighten the contradiction” argument — the idea that you have to intentionally make things get worse in order for something better to emerge. That seems needlessly damaging to me. Nevertheless, there are times when the worst does happen and we see just how much better the alternatives can be.

Mr. DeJoy’s tenure — with its heavy handed and ill-informed attempts to impose a partisan agenda on the Postal Service without respect to the law, regulatory strictures, or even common sense — ignited a firestorm of criticism. Part of that criticism arose from the partisan hubris that got Mr. DeJoy appointed and set him off on his path of pointless destruction. But most of the pushback came in recognition of the Postal Service’s role as infrastructure that binds and connects the nation.

That recognition and the appreciation of the Postal Service generally was long in coming, but perhaps it will finally allow us to have a thoughtful conversation about the future of the Postal Service and what good postal reform will look like. Perhaps, as we rediscover an appreciation for the democratic principles that support our republic and attempt to recover a sense of common purpose and mutual respect, we can begin to have meaningful conversations about the institutions that serve and support our aspirations of opportunity, equality, and justice.

Recently I testified in one of the cases involving the Postal Service. I closed with an observation by the Israeli philosopher Avishai Margalit. Dr. Margalit asks, what is a decent society? He answers:

The Postal Service is an infrastructure, an institution that seeks to elevate not humiliate the American people. Binding the nation together is not hollow sentiment. It is an aspiration that supports communities and connects people while offering access and opportunity. The Postal Service holds a unique and special place in our national foundation and framework. Going forward let us acknowledge that and engage in reform that acknowledges that.