by
Lord Keynes
My articles My siteAbout meMy booksMy videos
Follow on:Twitter
Summary:
Robert P. Murphy recently gave a talk on fractional reserve banking and free banking:[embedded content]Listening to this video really brings home what a lame cult of losers American libertarians actually are.Murphy repeats the same tired lies about fractional reserve banking we have all heard before: e.g., that a demand deposit involves two entities (the bank and depositor) owning the same money (when this is a blatant falsehood), and the fake legal history of fractional reserve banking peddled by Rothbard and Huerta de Soto.A bank is, by nature, an institution that borrows money from “depositors” (a misleading word) by means of the mutuum contract, so that the bank becomes the legal owner of all money “deposited.” The bank client legally forfeits all property rights in the money. In

Bibliography on Marx’s Law of the Falling Rate of Profit

Listening to this video really brings home what a lame cult of losers American libertarians actually are.

A bank is, by nature, an institution that borrows money from “depositors” (a misleading word) by means of the mutuum contract, so that the bank becomes the legal owner of all money “deposited.” The bank client legally forfeits all property rights in the money. In return, the bank customer becomes a creditor to the bank and receives a promise to repay the debt on demand (or whatever specific terms are used): in other words, the bank client simply receives an IOU from the bank. There is nothing fraudulent about this relationship.

The mutuum contract goes back to the ancient Roman law and banking practice, and was the basis of Western banking.

By creating 100% reserve banks or warehouses, Austrians like Murphy would create an inherently deflationary economy that would tank private sector investment, and cripple the endogenous money system on which capitalism relies.

The few decent points Murphy makes come at the end, when he points out that the claim of free bankers that Canada and Scotland had stable free banking systems is not credible. Worse still, free bankers fail to look at Australia, where free banking was a disaster.

As for free banking in Canada, this was the reality of Canada’s pre-1935 bank system:

(1) the “Canadian Bank Act of 1871” regulated banks and prohibited banks from lending on real estate, a sensible regulatory measure that is hardly in line with free banking;

(2) in 1907, the Canadian government lent $5 million in Dominion notes to the private sector banks to end a credit squeeze that threatened the agricultural sector and wider economy;

(3) the Finance Act of 1914 permitted Dominion banks to borrow notes directly from the Canadian Department of Finance with no gold-reserve requirement;

(4) the consequences of (3) were that from 1914 onwards Canada had a lender of last resort in the form of government-issued money;

(5) in 1924, the Dominion and Imperial Banks experienced runs and turned not just to other banks, but to the Department of Finance for liquidity to avert a crisis.

One can hardly speak of a free banking system when Canada had a de facto government lender of last resort from 1914.

Addendum
In response to George Selgin’s comment below, there is a straightforward response: in order to test whether any particular pre-1933 – or relatively free market – banking system was better than the system I advocate, you need to compare the latter with the period from c. 1945 to the early 1970s, when the finance sector in the Western world was (generally) subject to effective financial regulation. In this period, there were hardly any financial crises, serious asset bubbles largely absent, and the banking sector much more stable than the more laissez-faire periods that preceded it and the Neoliberal era that followed.

I could post all sorts of data here, but let us just look at this graph: 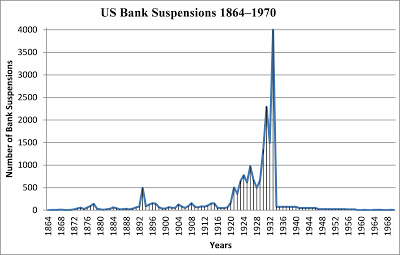 This speaks for itself.

Further Reading
Here are my posts on fractional reserve banking refuting the Rothbardian nonsense below:

“Are the Public Ignorant of the Nature of Fractional Reserve Banking?,” December 17, 2011.

“If Fractional Reserve Banking is Fraudulent, Why isn’t the Insurance Industry Fraud?,” September 29, 2011.

“What British Law Says about the Mutuum Contract,” October 2, 2011.

“If Fractional Reserve Banking is Voluntary, Where is the Fraud?,” October 3, 2011.

“A Simple Question for Opponents of Fractional Reserve Banking,” August 17, 2012.

“Foley versus Hill and the History of Fractional Reserve Banking,” July 29, 2014.

“A Critique of Murray Rothbard on the Origins and Legal Basis of Fractional Reserve Banking,” July 30, 2014.

“Fractional Reserve Banking is a Fundamental Part of Capitalism,” August 8, 2014.

“A Critique of Rothbard on the History of English Bailment Law,” August 11, 2014.

“Rothbard on how Fractional Reserve Banking would be illegal in Anarcho-Capitalism,” March 2, 2016.

Realist Left social democrat, left wing, blogger, Post Keynesian in economics, but against the regressive left, against Postmodernism, against Marxism
My articlesMy siteAbout meMy books
Follow on:Twitter
Previous Steve Keen on how Private Debt and Credit cause Financial Crises
Next Dinesh D’Souza as a Charlatan