by
Stavros Mavroudeas
My articles My siteAbout meMy booksMy videos
Follow on:Twitter
Summary:
Below follow the text and the links for downloading of my contribution title ‘The 4th Industrial Revolution: Myth or Reality?’ at the Workshop organized by Union of Economists of Secondary Education Teachers on 15/2/2019 in Thessaloniki Workshop: ‘The Economy on the Horizon of the Fourth Industrial Revolution’ Thessaloniki, 15/2/19 ‘’ Stavros Mavroudeas Prof. of Political Economy Panteion University e-mail: [email protected]   Abstract The term ‘4th Industrial Revolution’ is extremely popular today. It was proposed by Klaus Schwab (president of the Davos World Economic Forum) and argues that the contemporary economy is undergoing a fundamental technological transformation because cyber-physical systems are created that integrate the physical, digital and biological dimensions

Matias Vernengo writes On the origins of Sraffa’s equations

Stavros Mavroudeas writes ‘The Political Economy of the COVID-19 pandemic’,S.Mavroudeas

Below follow the text and the links for downloading of my contribution title ‘The 4th Industrial Revolution: Myth or Reality?’ at the Workshop organized by Union of Economists of Secondary Education Teachers on 15/2/2019 in Thessaloniki

Workshop: ‘The Economy on the Horizon of the Fourth Industrial Revolution’

The term ‘4th Industrial Revolution’ is extremely popular today. It was proposed by Klaus Schwab (president of the Davos World Economic Forum) and argues that the contemporary economy is undergoing a fundamental technological transformation because cyber-physical systems are created that integrate the physical, digital and biological dimensions (robots, artificial intelligence, nanotechnology, internet of things, 3D prints, fully automated vehicles etc.). It is argued that this technological transformation is revolutionizing the potential of the economy and opening up greater possibilities for economic growth. At the same time, however, it is debatable whether this benefits all categories of countries and all social classes or whether the respective inequalities are growing. But besides the headlines, a more critical study finds that it is the sixth time that a 4th industrial revolution was announced, and all previous ones have been announcements have been disproved. In the field of economic analysis, the ‘Solow Paradox’ highlights the unsustainability of its past announcements. This paper examines whether the 4th Industrial Revolution is currently taking place. It also analyzes under what conditions a radical technological change benefits the social majority and under which it does not.

The term ‘4th Industrial Revolution’ is extremely popular today. It was proposed by Klaus Schwab (president of Davos World Economic Forum) in 2015 in Davos and was originally published in an article in Foreign Affairs and two years later in a hurriedly written book. He argues that the contemporary economy is undergoing a fundamental technological transformation because cyber-physical systems are created that integrate the physical, digital and biological dimensions (robots, artificial intelligence, nanotechnology, Internet of Things, 3D prints, fully automatic vehicles, etc.). These changes are supposed to be so profound that there has never been a period in history that involves so many possibilities and risks at the same time. In particular, it is argued that this technological transformation is revolutionizing the potential of the economy and opening up greater possibilities for economic growth. At the same time, however, it is debatable whether this benefits all categories of countries and all social classes or whether the respective inequalities are growing.

2. But it is not a scientific finding

There is no conclusive evidence that these journalistic dithyrambs are confirmed empirically. Any data reported are selective and extremely limited in time. Thus, the 4th industrial revolution is just a hypothesis.

Instead of fancy declarations, it would be preferable to reflect on the blatant disproval of all previous modern announcements of a new technological revolution based on information technology.

This idea is quite old. It first appeared in the 1960s. However, where it gained the most popularity and attempted to be empirically documented, it was in the 1990s with the ‘New Economy’ label, supposedly based on information technology, biotechnology and telecommunications. It was accompanied by a huge rise in stock exchanges – particularly in the new technology index (NASDAQ). On the basis of this, Mainstream Economics pronounced the end of the economic cycle and the achievement of almost perpetual sustainable growth. Unsurprisingly, these grandiose declarations were soon refuted. In 2001, the dot.com bubble collapsed. Moreover, economic cyclical fluctuations have never been abolished and the crisis returned in its most acute form in 2008.

Indicative is the NASDAQ (composite) trend: 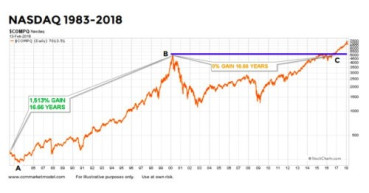 The ‘New Economy’ case was empirically tested primarily in the US economy. And that is where it failed utterly. As Solow (1987) has pointed out, ‘you can see computers everywhere except for productivity statistics’. In particular, the increase in productivity in the US economy from the mid-1970s to the mid-1990s was negligible. This was called the ‘productivity paradox’ or the ‘Solow paradox’ and since then he has taken all the assumptions about a new technological revolution based on information technology.

The attempts by ‘New Economy’ supporters (e.g. Brynjolfsson and McAfee (2011) to rebut these arguments (citing measurement problems, lagging behind in the implementation of new technologies etc.) have failed, with empirical evidence still disappointing. Thus, even ‘New Economy” supporters (e.g. Acemoglou et al (2014)) speak nowadays about the return of ‘Solow’s paradox’. To put it in empirical terms, US productivity in pre-‘New Economy’ decades was rising by approximately 2.1% per annum. From 2004 to 2014 productivity growth receded and increased by approximately 1.2%. Injuring further the ‘New Economy’ hypothesis, productivity has fallen since 2011 to 0.6% (Acemoglu et al. (2014)). 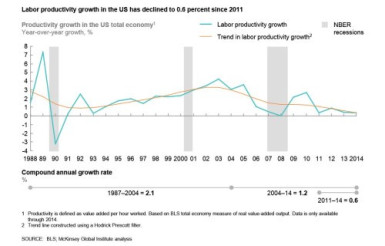 Gordon has created a graph showing the decline in US labor productivity – which is different from TFP only in measuring employee performance – in different historical periods. This chart shows that the biggest gains in productivity came from the second industrial revolution, albeit with a time lag. Innovations in transport, communications and entertainment, at home and at work have all had permanent effects, leading to high productivity increases that continued in the post-World War II period. 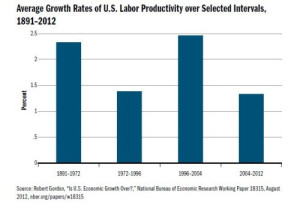 3.There are additional denials of the case of the 4th Industrial Revolution

4.While there is no tangible impact on growth due to new technologies, there are worrying trends in today’s capitalist economies

The labour share is decreasing and this is attributed to the substitution of workers by machines. It seems that the ‘race against the machine’ has already been run and that workers have lost. This results in worsening income inequality at the expense of labour. In Marxist terms this is a consequence of the secular tendency of the organic composition of capital (that is the ratio of constant to variable capital) to increase. 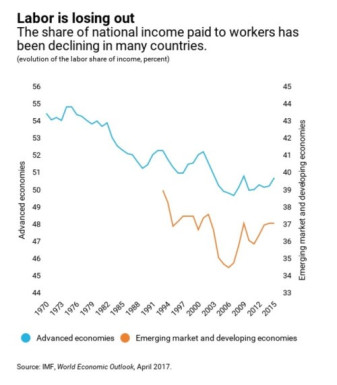 Another negative consequence is that new technologies are used to increase the control exerted by the enterprise on its employees. In K.Marx’s terms, new technologies augment the ‘despotism’ of the factory owner and lead almost to ‘Big Brother’ situations.

5.Why is this mania looking for new technological revolutions?

Behind these repeated claims of a new industrial revolution lay several practical elements.

The first is the capitalist utopia of the ‘compliant factory’. For every capitalist and the capitalist class as a whole paradise is a world of factories (owned by them) producing profits but without workers and their demands and resistance. Unluckily for them this is a mere utopia. If waged labour ceases to exist then capital also follows suit.

The second element is the expansion of an ‘industry’ of well-paid supposedly discovering or applying the new industrial revolution. This ‘industry’ – and the Davos Forum is a typical example – has to reproduce this myth in order to maintain its revenues.

Last but not the least, in historical periods as the current one that are characterized by falling profitability, capital hopes for a technological deus ex machina in the form of technological revolution. This deus ex machina is believed that it can restore profitability; that is act as a strong counter-tendency to that of the falling profit rate.

6.The Marxist interpretation of technological change in capitalism and the role of new technologies

Marx (and the majority of economic analysis) argues that the first is the dominant case. Apart from empirical studies (which predominantly verify this hypothesis0, Marxism offers also a theoretical explanation why this type of technical change predominates. It argues that the means of production (capital in Neoclassical terms) are the means through which the capitalist can control the worker and extract surplus-value from the latter. Moreover, intrea-capitalist competition pushes capitalists to adopt labour-shaving techniques. Labour-saving technical change increases both labour productivity (product per worker) and capital efficiency (constant capital per worker).

This role of technical change in the operation of the law of the Tendency of the Rate of Profit to Fall (TRPF) is typically presented in the following mathematical terms.

From the previous equations it is derived:

The capitalist system is trying to increase labour productivity by introducing new technologies. This leads to labour displacement and its substitution by machinery (increase of the organic composition of capital). This may lead to an increase in production and the opening up of new sectors to compensate for labour displacement. But over time, reducing labour means that less new value is created (as labour is the only creator of new value) in relation to the cost of capital invested. Therefore, after a period of recovery, profitability begins to decline as too much capital has accumulated that cannot be invested sufficiently profitable. This happens because ina capitalist economy investment and production depend on the profitability of capital. Thus, a capitalist economy that may increasingly rely on the web of things and robots will lead to more intense crises and greater inequality rather than increased prosperity and welfare for the society as a whole.

He is currently Professor of Political Economy at the Department of Social Policy of Panteion University. He was previously Professor of Political Economy at the Department of Economics of the University of Macedonia. He studied at the Economics Department of the National Kapodistriakon University of Athens, from where he received his BA Economics (1985 - First Class Honours).
My articlesMy siteAbout meMy books
Follow on:Twitter
Previous «Ο παγκόσμιος καπιταλισμός εμπρός στο 2019: αναταραχές και ανησυχία», Στ. Μαυρουδέας – Τετράδια Μαρξισμού Νο.9 2019
Next Οι εφοπλιστές «πνίγουν» την ακτοπλοϊα – ΠΡΙΝ 28-7-2019

Crude economism took over our society