by
Yanis Varoufakis
My articles My siteMy booksAbout me
Follow on:Twitter
Summary:
The Green Party MP and the MeRA25 leader journey from democracy’s inception through the tumultuous Brexit period and through to the year 2035 There’s chaos on the streets of Westminster as the activists of Extinction Rebellion bring traffic to a standstill to highlight the urgency of action on the climate crisis. If the old democracy is not working, perhaps new ways of making ourselves heard are required. As the only Green Party MP in Westminster, Caroline Lucas knows all about this struggle, while economist and politician Yanis Varoufakis is fighting for new ways of doing economics and politics in Greece and beyond, especially since MeRA25, the progressive pan-European party he founded, entered Parliament in

Yanis Varoufakis writes Euroleaks: Why release? And why now?

Yanis Varoufakis and Brian Eno on Money, Power and a Call for Radical Change – video

Euroleaks: Why release? And why now? 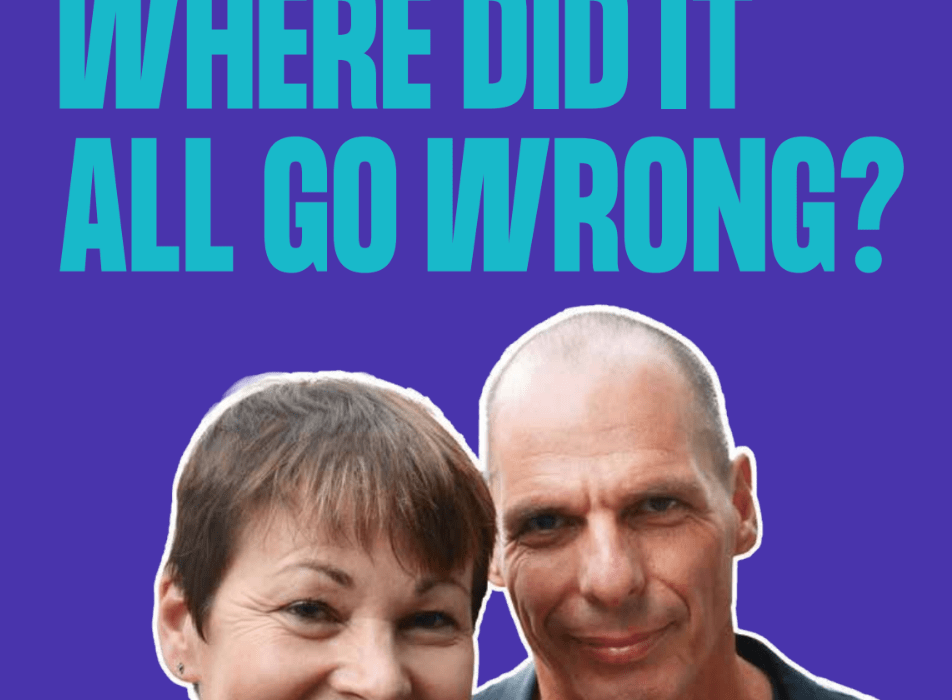 There’s chaos on the streets of Westminster as the activists of Extinction Rebellion bring traffic to a standstill to highlight the urgency of action on the climate crisis. If the old democracy is not working, perhaps new ways of making ourselves heard are required.

As the only Green Party MP in Westminster, Caroline Lucas knows all about this struggle, while economist and politician Yanis Varoufakis is fighting for new ways of doing economics and politics in Greece and beyond, especially since MeRA25, the progressive pan-European party he founded, entered Parliament in July. Here’s what happened when the two came together to talk democracy – from its inception right through to the year 2035.

Caroline Lucas: So how are you?

Yanis Varoufakis: I’m OK. It is not just Brexit destroying the soul. But we are now in Parliament, so it is very liberating to have our own party and not depend on unreliable comrades. There are nine of us and today we have a sitting that will continue until after midnight. You know how it is…

CL: You have got the bad habits from Britain. But I am so jealous of there being nine of you. I would give anything for eight colleagues. So this issue is dedicated to the subject of democracy…

CL: Your country is seen as the birthplace of democracy. In your opinion has there ever been a really good democracy we can look at and say, ‘That was when it was working well’?

YV: Democracy is always unfinished business. It is imperfect by design, especially in societies with vested interests vying for domination. But the merits of studying ancient Athenian democracy, which only lasted a few decades, is that it was the first and last time the poor controlled the government. Which is, interestingly, Aristotle’s definition of democracy. It was a remarkably radical idea that control over the instruments of the state should be independent of wealth.

CL: How did it work?

YV: The argument was that the Aristocrats could afford to buy influence in an election, so elections were an enemy of democracy. Democrats supported a lottery – sortition, as it is called today. Every official position in Athenian democracy was elected by lottery, including judges. Their terms were confined to six months. The only posts not sorted by lottery were the general, who had to know how to conduct a war, and bankers. The officials responsible for minting the money and for quality control of products like wine were slaves. Why? Because citizens had the right not to be beaten. Slaves did not. The idea was that bankers had to fear that they would be beaten up if they messed up the finances of the city. I think this is a splendid proposal for the City of London!

CL: That would certainly shake things up! And it’s so interesting. In terms of learning from that for today, are powerful corporations the new aristocracy?

YV: The corporations, the media moguls who effectively control public opinion, the equity and pension funds that own the corporations – that is the grid of aristocratic power. And the pertinence of the Athenian idea is evident when we look at ways progressives are thinking about breaking the stranglehold over power by these groups. At DiEM25 [Democracy in Europe Movement 2025 , founded in 2016 in Berlin, with Caroline’s participation] we have been talking about citizens’ assemblies – not to replace Parliament, but to function side by side with it. In Ireland with the abortion issue this process broke that deadlock and allowed Parliament to free itself from years of impasse. The Brexit process is never going to go away. The only way to unite the country is through citizens’ assemblies becoming part of national politics, local politics and party structures. In DiEM25, we have a coordinating committee but when decisions are controversial, a validating council of 50 men and 50 women chosen as a jury at random from our members have the final word. So many disputes have been resolved that way. It frees up the coordinating committee when we know there is this backstop of randomly chosen democratic opinion. Parliament needs that.

CL: If someone said, ‘Doesn’t that undermine the influence of Parliament?’ – would you just say that is the point, you need to check its power?

YV: I would make a more radical claim. I think it enhances the legitimacy of Parliament. A citizens’ assembly offering checks and balances means Parliament’s importance in expressing the views of the British people is enhanced. The British Parliament has never been less sovereign than today.

CL: Very true. On the issue of Brexit – to what extent would you describe it as a reflection of a crisis in democracy? To my mind, the vote revealed, in the anger it engendered, that there was already a crisis before that vote.

YV: It was a crisis created by neo-liberalism and a crisis of neo-liberalism. There was always a Eurosceptic streak in Britain, with good reason. From an economic point of view, the British capitalist model has always been different from the continental model. In Britain, capitalism spontaneously emerged in opposition to the aristocracy – and the aristocracy decided if you can’t beat them, join them. In Germany, capitalism came later and was a state enterprise. The rest of Europe followed the German model so they were always at odds. But Brexit won in 2016 because the referendum gave an opportunity to express anger at being disenfranchised by Thatcherism as well as the Brussels establishment’s evident dislike of democracy. If the question was ‘Do you like the idea of pink pavements as opposed to grey pavements?’, they would have voted for pink pavements if they thought that would upset David Cameron, Tony Blair, the Treasury, the IMF, et cetera.

CL: I agree. It felt as if the unfair, unrepresentative, first-past-the-post electoral system we have in this country did not allow the anger about the hollowing out of the economy to be expressed before. A referendum, where people’s votes count in a much more direct way, in a sense took the lid off that boiling pot. People were so angry that successive governments could ignore the vast majority of people.

YV: I agree. When you have a society torn apart by austerity and the globalisers treating the majority of people as cattle whose price has tanked – who they don’t care about or fear – there is going to be a backlash, just like in the 1930s where it favoured fascists, xenophobes and racists. But even if you didn’t have the referendum I think you would have similar problems. Look at Trump’s America. Even though Jeremy [Corbyn] and John [McDonnell] are our great friends, we keep saying it is preposterous for Labour to remain committed to first past the post. If a government is granted an absolute majority when they only received 30 per cent of the vote, you end up with a complete disconnect between public opinion and the House.

CL: I could not agree more. At the last election 68 per cent of votes didn’t make any impact on the outcome – they just stacked up in constituencies where sufficient votes had already been cast to get the winner over the line. It turns people off the idea of even voting – why bother when the system feels so stacked against you? One of DiEM’s straplines is that Europe will be democratised or it will disintegrate. Will the Brexit convulsions spread across the EU as anger spreads against a top-down Europe not responding to people’s needs?

YV: It is more nuanced. Brexit is the most obvious form of disintegration. But if you fly to Rome and drive up to Munich, at the border between Italy and Austria you probably wait for an hour. There is a border where there wasn’t one a few years ago. To cross into Germany you will get stuck in another queue. That is disintegration. At Schengen, we celebrated doing away with all the borders – and now they are back. That is a major event that nobody talks about. My fear is not that others will leave – they will probably learn the lesson from this dog’s Brexit and stay. But if we keep allowing the EU to fragment, at some point it will make no difference if you are in or out.

CL: You are working on a new book called The Shaken Superflux. One question is, what on earth is that? The second is that it imagines our future in 2035 – what does it look like?

YV: I have changed the title. It was too snobbish, too Shakespearian! Now it is called Another Now: Dispatches From An Alternative Present. My previous book was Talking To My Daughter about the Economy, which was my analysis for my daughter.

CL: It was brilliant. It was your analysis for me as well, so thank you.

YV: This is a sequel. One criticism that really struck is that I was explaining why capitalism sucks, but what is the alternative? This is the nightmare question progressives try to avoid. I am pushing 60 and decided I can’t avoid it any more. So it is my attempt to describe how, not in a Star Trek world, but with today’s technology, we could have an alternative system. It is a mind-boggling exercise. So I use a narrative strategy: I tell the story from the perspective of 2035 and the author – not me – is recounting events. By the way, it all happens in Brighton. I wanted a seaside location.

CL: Can I have a cameo role please?!

YV: Ha! The idea is that the financial crisis in 2008 was so earth-shattering that the timeline bifurcated. It split up. You and I today live in one trajectory, but there was another one. And a socialist technologist in San Francisco gains access to the other trajectory. So he finds out that instead of the silly Occupy Wall Street movement, in 2009 there was a very serious techno-ecological rebellion around the world that harnessed the anger about the events of 2008 and changed corporate law, changed democracy, changed citizenship and so on.

CL: Anything we haven’t covered?

YV: I make a distinction between optimism and hope. I am not optimistic. I see no evidence of anything good happening. But I am latching on to hope without optimism. The way youngsters are taking it upon themselves to strike and protest is wonderful. But to prevent this energy from fizzling out, like the World Social Forum and the anti-globalisation movements did, we need programmatic converge and we need to activate citizens’ assemblies everywhere – that is where I am putting all my efforts.

An accidental economist Let me begin with a confession: I am a Professor of Economics who has never really trained as an economist. But let’s take things one at a time.
My articlesMy siteMy booksAbout me
Follow on:Twitter
Previous Progressive Internationalism & why a Corbyn government is the only cure for a terrible Brexit – openDemocracy video interview
Next “El ‘establishment’ y la ultraderecha se necesitan” – El Mundo