SECURE Act Up for Consideration in the Senate – A Rehash

by
run75441
My articles My books
Follow on:
Summary:
I covered the House SECURE Act and the Senate RESA version last July. The House RESA Act is up for consideration in the Senate now. It does not look like it is going to make it due to the impeachment process going on and a potential trial in the Senate. There is also a small matter of a budget needing to be passed. It was to be considered under an unanimous consent vote; however, three Republican Senators (Mike Lee of Utah [unidentified reason], Ted Cruz of Texas (529 Accounts), and Pat Toomey of Pennsylvania [Gold Star tax exemption]) put holds on the bill (reasons in parenthesis). Then there is McConnell, who will not bring it to the floor for a vote. Congress has been working on a much-needed improvement for “Middle Class” savings and growth over the

First look at the 2021 economy: housing

I covered the House SECURE Act and the Senate RESA version last July. The House RESA Act is up for consideration in the Senate now. It does not look like it is going to make it due to the impeachment process going on and a potential trial in the Senate. There is also a small matter of a budget needing to be passed. It was to be considered under an unanimous consent vote; however, three Republican Senators (Mike Lee of Utah [unidentified reason], Ted Cruz of Texas (529 Accounts), and Pat Toomey of Pennsylvania [Gold Star tax exemption]) put holds on the bill (reasons in parenthesis). Then there is McConnell, who will not bring it to the floor for a vote.

Congress has been working on a much-needed improvement for “Middle Class” savings and growth over the span of employment in order  to boost retirement resource for citizens who can afford to save. Both the Senate and the House versions have been sitting since July. Whata surprise, heh?

Dueling bills to restructure IRAs and 401ks appear to be redundant; but, there are differences.  Better known as the “Setting Every Community Up for Retirement Act” (SECURE Act) H.R.1994 and the Senate has the “Retirement Enhancements and Savings Act” S.792 (RESA) version. Both bills were passed with bipartisan support. Both bills for the Middle Class had pluses and rather big negatives also. It appears the House RESA Act is going forward for a vote.

The RESA Act is mostly for the masses who may be able to save some money for retirement in spite of stagnant wages. No worries for the for the rich in income (unless something has changed since I last looked at this).  A major outcome of the Trump tax bill were tax breaks for the wealthy and corporations. Besides much of the resulting income increases going to 1% of the household taxpayers, the same 1% were given the ability to shelter large amounts of income in gifts to their heirs. It is a great time to be rich in income and have the ability to shelter it by making gifts of it to your heirs’ tax free! Keep in mind, seven or so years out and those income tax cuts will disappear for the middle income brackets. Somebody has to pay for the overall breaks otherwise their tax relief will sunset as they were passed under reconciliation in the Senate.

A little history (past the leap) on why Congress did something which will help those who can afford to save presently, penalize those bequeathed whatever is left over after death, and pay for the IRA and 401k break.

From 1979 to 2017, the average annual income for the 1% of the household taxpayers has increased 156%, the top 1 hundredth of 1% income increased 343%, and the average American’s income did not increase at all. In spite of increased education from 1970 when half of Americans 25 years and older had a high school degree compared to today when the proportion of Americans having a college degree tripled, income has stagnated for much of America. Even with the increased education, as Nick Hanauer in a recent Atlantic on this topic stated, the “Education is Not Enough” or was not enough to build, to build a vibrant middle class. Nick is also reiterating what Tom Hertz said in 2006 in his article “Understanding Mobility in America:

“The first aspect is the question of intergenerational mobility, or the degree to which the economic success of children is independent of the economic status of their parents. The second aspect is the short-term question of the amount by which family incomes change from year to year. One very clear conclusion is children from low-income families have only a 1 percent chance of reaching the top 5 percent of the income distribution versus children of the rich who have about a 22 percent chance.”

Although not quite as bad, the same holds true for the next level up on the ladder today. All the education in the world may not make a bit of difference in upward mobility as Nick and Tom Hertz concluded unless the income and the status is already there. A successful middle class with good income has to be present. It is disappearing.

So what Congress is doing to resolve the issue?.

The House passed the SECURE Act with an almost unanimous bipartisan 2nd vote. Prior to the first vote, Republican NC Representative Patrick McHenry made a motion for an affirmative vote (page H4147) stating they stand together against the anti-Semitic BDS movement. How this applies to the average citizen’s IRA is beyond me. It is a tagalong to the SECURE Act with the hope it would pass. It lost with 222 in opposition.

A few things about the House “Setting Every Community Up for Retirement Act (SECURE).

• It lengthens the amount of time a person can contribute to an IRA beyond 70.5 years of age.
• Raised the required minimum distribution (RMD) age to 72 from 70 1/2 years old.
• Increased the Safe Harbor percent from 10 to 15%.
• Allowed long-term, part-time employees to contribute.
• Put in place an small employer tax credit for enrollment.
• Revised how benefits are paid out to a non spousal from 5 to 10 years (page H4234).
• Allowed automatic enrollment.
• It eliminates the Stretch IRA for non spousal inheritors (children).

“The House SECURE Act would eliminate the current rules allowing non-spousal IRA beneficiaries to use (stretch IRA) minimum distributions (RMDs) from an inherited account over their own lifetime (and potentially allow the funds to grow for decades). With the SECURE Act, all funds from an inherited IRA would have to be distributed to non spousal beneficiaries within 10 years of the IRA owner’s death The rule would apply to inherited funds in a 401k account or other defined contribution plans.”

Other than the elimination of the Stretch IRA, these changes were needed as they could improve the amounts accumulated for retirement. As I mentioned earlier, much of America has not incurred the same income increases as the 1% or the 1 tenth of 1% of the household taxpayers. Pre-inflation YOY income growth for non supervisory Labor has been ~3%. Subtract out inflation of 2% and income has grown by 1% for much of America not leaving a lot to put into a 401k. I am waiting for the next shoe to drop of increasing the age of when people can take SS. One could debate the impact of this change for the majority+ of the citizens.

The Senate RESA bill not being considered is similar in content except for a provision buried in it taking aim at the Middle Class also. 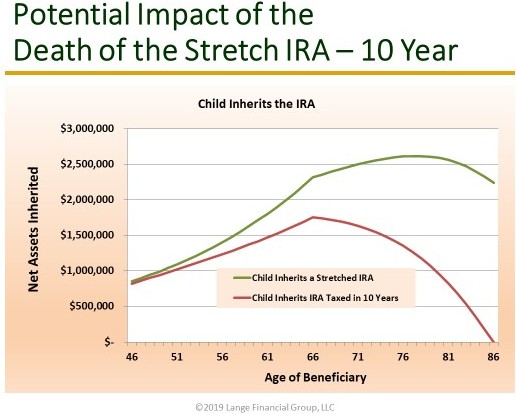 The Senate’s RESA Act shortens the time period for non-spousal beneficiary withdrawal who have inherited an IRA with greater than $400,000 (IRA, Roth IRA or 401k). RESA exempts the first $400,000 inherited to a life time of RMD withdrawals and then it forces beneficiaries to cash out over a 5-year period any amount greater than $400,000. It could have tax implications if the amount over $400,000 was large or one’s income tax bracket was high.

As one reader pointed out, many people with 401Ks have less than $400,000 in their accounts when they retire. With little growth in income occurring (mentioned earlier), one can see why people are not saving for retirement and why there is less in their 401ks. It would be great if the SECURE Act picked up on the $400,000 exemption and continued the after 1o year tax on amounts greater than $400,000. Or just leave the Stretch provision alone.

Under today’s Stretch IRA rules, heirs of IRA owners were allowed to extend the taxable distributions of an inherited IRA over their lifetime, hence being called “stretch IRAs.” The Senate bill RESA allowed $400,000 of aggregated IRAs to stretch per beneficiary, but chops the cash-out period down to five years for the balance greater than $400,000. Either  has tax implications for the receivers (mostly the middle and upper middle income brackets) of inheritance.

“What About” those 1-percenters? Trump’s Tax Overhaul law doubles the estate-tax exemption to $22 million a couple and possibly avoiding taxes in dynasty trusts. The new law doubles the amount that can be passed to heirs without worrying about estate and gift taxes, to about $22 million for a married couple (redundant, I know). But the thresholds are in place only until 2025, and the ultra-rich are turning to a key tool — the dynasty trust — to secure the financial futures of their children, grandchildren, great-grandchildren, and beyond.

My articlesMy books
Follow on:
Previous Plastic: part of the problem . . . part of the solution – Part 1 (of 4): A Global Problem
Next The End Of Decades Having Identities In The USA?

Reexamining the economic costs of debt