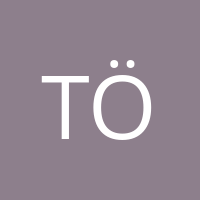 This article first appeared in the Indian journal Economic and Political Weekly on 18 July 2022.
A Murder in Konya
Konya is a province in Turkey. On 6 July 2022, about an hour before I started writing this article, a murder news hit the Turkish pages of the internet: “In Konya City Hospital, a patient shot and killed a cardiologist and his secretary today.” Whether the assassin committed suicide or the private security killed him is unknown, although there are both rumours.
City hospitals, the third largest public–private partnership (PPP) endeavour in Turkey, are the second leg of the Healthcare Reform Programme started by the governing Justice and Development Party (JDP) after it won the election in the late 2002. Also known as the Health Transformation Programme, the World Bank

END_OF_DOCUMENT_TOKEN_TO_BE_REPLACED

This article first appeared in the Indian journal Economic and Political Weekly on 19 March 2022.
Russian Invasion of Ukraine
The Russian invasion of Ukraine started on 24 February 2022. Since then, several thousand combatants from both sides and more than 500 Ukrainian civilians have died, bombs have ruined many cities, and more than two million Ukrainians, half of them children, left the country to become refugees. And the sweeping sanctions the West imposed on Russia in response not only devastated the Russian and Ukrainian economies but also brought the world to the brink of a deep global inflationary recession, worsening the economic hardship of the poor around the globe. Writing a cold-blooded analysis of the sanctions in the midst of witnessing this tragedy, one of the greatest in

END_OF_DOCUMENT_TOKEN_TO_BE_REPLACED

Why are the long-term US Treasury yields falling? 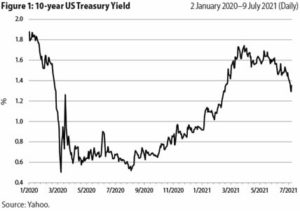 END_OF_DOCUMENT_TOKEN_TO_BE_REPLACED

By T. Sabri Öncü & Ahmet ÖncüIn Memory of David Graeber (1961–2020)This article first appeared in the Indian journal, Economic and Political Weekly, on 21 November, 2020On 30 March 2020, the United Nations Conference on Trade and Development (UNCTAD) called for a $2.5 trillion COVID-19 crisis package for developing countries.[1] The UNCTAD proposals were: (i) $1 trillion to be made available through the expanded use of the International Monetary Fund (IMF) issued Special Drawing Rights (SDRs); (ii) $1 trillion for debt cancellation; (iii) $500 billion to fund a Marshall Plan for health recovery to be dispersed as grants.Shortly after the UNCTAD

END_OF_DOCUMENT_TOKEN_TO_BE_REPLACED 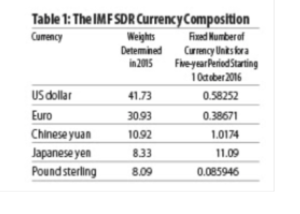 By T. Sabri Öncü & Ahmet Öncü
In Memory of David Graeber (1961–2020)
This article first appeared in the Indian journal, Economic and Political Weekly, on 21 November, 2020 under the title “A Consortium Proposal to the SDR Basket Countries”
On 30 March 2020, the United Nations Conference on Trade and Development (UNCTAD) called for a $2.5 trillion COVID-19 crisis package for developing countries.[1] The UNCTAD proposals were: (i) $1 trillion to be made available through the expanded use of the International Monetary Fund (IMF) issued Special Drawing Rights (SDRs); (ii) $1 trillion for debt cancellation; (iii) $500 billion to fund a Marshall Plan for health recovery to be dispersed as grants.
Shortly after the UNCTAD call, many others jumped on to the bandwagon, and on 12 April 2020, even

END_OF_DOCUMENT_TOKEN_TO_BE_REPLACED

By T.Sabri Öncü & Ahmet Öncü This article first appeared in the Indian journal, Economic and Political Weekly on 18 April 2020. The authors’ contact details are at he foot of this article.Abstract Based on the German Currency Reform of 1948 and the “Modern Debt Jubilee” of Steve Keen, a globally coordinated orderly debt deleveraging mechanism is proposed to address the global debt overhang problem. Since the global debt overhang and lack of sufficient climate finance flows are interconnected, Climate Authorities are added to the mechanism. Note: We completed this article two months before the Coronavirus Crisis that started in January 2020. Although we present the article as is, the Climate Authority we propose can be expanded to meet the funding needs of fighting the

END_OF_DOCUMENT_TOKEN_TO_BE_REPLACED

Triggering a Global Financial Crisis: Covid-19 as the Last Straw

T. Sabri Öncü ([email protected]) is an economist based in İstanbul, Turkey. This article was written on 8 March 2020 and first published in the Indian journal Economic and Political Weekly on 14 March 2020.Whether a black swan or a scapegoat, Covid-19 is an extraordinary event. Declared by the WHO as a pandemic, Covid-19 has given birth to the concept of the economic “sudden stop.” We need extraordinary measures to contain it.Initially referred to as the novel coronavirus 2019, the coronavirus disease (Covid-19) originated late in

END_OF_DOCUMENT_TOKEN_TO_BE_REPLACED

Dealing with the overhang of non-financial private debt

Building on the International Monetary Fund (IMF) Global Debt Database (GDD) comprising debts of the public and private non-financial sectors for  190 countries dating back to 1950, Mbaye et al (2018) identify a recurring pattern where households and firms are forced to deleverage in the face of a debt overhang, dampening growth, eliciting the injection of public money to kick-start the economy. They observe that this substitution of public for private debt takes place whether or not the private debt deleveraging concludes with a financial crisis, and deduce that this is not just a crisis story but a more prevalent

END_OF_DOCUMENT_TOKEN_TO_BE_REPLACED

The End of Super Imperialism?

T Sabri Öncü ([email protected]) is an economist based in İstanbul, Turkey. This article was first published in the Indian journal the Economic and Political Weekly (EPW) on 28 September 2019.Summary: With intensifying concerns regarding the soundness and stability of the international monetary and financial system, calls for reforming it have been on the rise. One recent call was made by the Bank of England Governor Mark Carney, in August 2019, in which he suggested a synthetic hegemonic currency to replace the US dollar as the key reserve currency. Whether such calls will lead to an end of the key reserve currency status of the dollar remains to be seen.  Oldrich Vasicek is an old friend. When I started my “quant” career in bonds in January 1994 in Walnut Creek,

END_OF_DOCUMENT_TOKEN_TO_BE_REPLACED 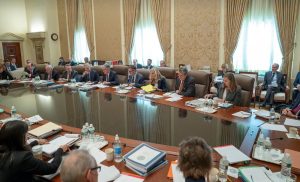 T Sabri Öncü ([email protected], @tsoncu) is an economist based in İstanbul, Turkey. This article was sent on 7 June 2019 and published first on 15 June 2019 in the Indian journal Economic and Political Weekly.  Summary: Would market volatility amidst global trade tensions and uncertainty cause a global recession? Although the world’s major central banks had managed to avoid risks in the first week of June, despite some small variations at some maturities, the United States yield curve remained more or less as it was at the beginning. What will happen in the not-so-distant future?  The titles of a few recent articles

END_OF_DOCUMENT_TOKEN_TO_BE_REPLACED

Are We Heading towards a Synchronised Global Slowdown?

This article first appeared in the Indian journal Economic and Political Weekly on February 9, 2019.Abstract: The global economy is heading towards a downturn. However, is the world prepared to deal with the consequences? Whether it is a slowdown or recession, it remains to be seen as to what the future would hold for the banking systems of Eurozone and China, and the global stocks in general.When the International Monetary Fund (IMF) issued its World Economic Outlook Update in January 2018, the future looked bright. Indeed, even the title of the update was very optimistic: Brighter Prospects, Optimistic Markets, Challenges

END_OF_DOCUMENT_TOKEN_TO_BE_REPLACED

This article first appeared in the Indian Journal the Economic & Political Weekly on 12 October 2018 About four years ago, I penned an article in the Economic and Political Weekly titled, “A Sovereign Debt Story: Republic of Argentina vs NML Capital” (EPW, 17 May 2014 ). Many things have happened since then and it is time to write a private debt story now,

END_OF_DOCUMENT_TOKEN_TO_BE_REPLACED

Did This Straw Break the Finance Sector’s Back?

Image with acknowledgment to http://carolinaparrothead.blogspot.com/2016/05/breaking-camels-back.html

Abstract: The world’s financial markets are hurtling towards a new phase of crises ranging from currency to balance of payments  to sovereign debt to banking crises. The monetary tightening policies of the United States Federal Reserve and the European Central Bank will only precipitate crises in emerging market as well as peripheral eurozone economies, which will have global repercussions.Prologue: the story so far…I will define the ‘straw’, and start with quoting from my July 2017 H T Parekh Finance

END_OF_DOCUMENT_TOKEN_TO_BE_REPLACED

Debts That Cannot Be Paid Will Not Be

Total global debt has increased, growth has been slowing down since the onset of the global financial crisis in 2007 and has been rapidly decelerating after 2012. This may be a sign that the world has arrived at its debt carrying capacity or has even crossed it, meaning that capitalism is probably already insolvent.With my June 2015 HT Parekh Finance Column article titled “When Will the Next Financial Crisis Start?” (Öncü 2015a) I initiated an investigation of the possibility of a new phase in the ongoing global financial crisis