Home / Naked Keynesianism / Economics without Gaps: on Ibn Khaldun and non-Western traditions in the history of ideas

Economics without Gaps: on Ibn Khaldun and non-Western traditions in the history of ideas

by
Matias Vernengo
My articles My siteMy booksMy videos
Follow on:TwitterLinkedIN
Summary:
Ibn Khaldun, Arab scholarA piece* from a few years ago, has again become somewhat popular and it has been making the rounds. It suggests that the Arab scholar Ibn Khaldun developed the ideas of classical political economics in the late XIV century, about half a millennia before Adam Smith, often seen as the father of classical economics, and of modern economics. Some would suggest that Khaldun was the real father of economics (or stepfather in the first essay on top). To a great extent, the discussion of the role of non-western scholars tries to show that an Eurocentric bias has dominated the history of economic thought. This discussion goes hand in hand with the notion that the Rise of the West and the so-called Great Divergence are relatively recent phenomena.There are many elements in


Matias Vernengo writes What is heterodox economics? Some clarifications

Daniel Becker writes Our relationship of work, technology and life

Mike Norman writes My new podcast episode is out 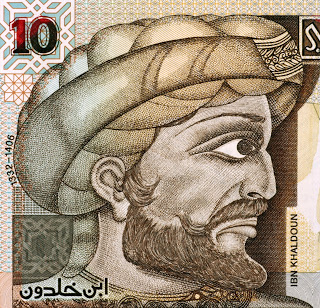 Ibn Khaldun, Arab scholar
A piece* from a few years ago, has again become somewhat popular and it has been making the rounds. It suggests that the Arab scholar Ibn Khaldun developed the ideas of classical political economics in the late XIV century, about half a millennia before Adam Smith, often seen as the father of classical economics, and of modern economics. Some would suggest that Khaldun was the real father of economics (or stepfather in the first essay on top). To a great extent, the discussion of the role of non-western scholars tries to show that an Eurocentric bias has dominated the history of economic thought. This discussion goes hand in hand with the notion that the Rise of the West and the so-called Great Divergence are relatively recent phenomena.

There are many elements in that assessment that are correct. Schumpeter's massive History of Economic Analysis does mention Khaldun in passing on his discussion of historical sociology, but he also argues that between the ideas of classical antiquity and scholastic thinking there was a great gap.** In his words: "So far as our subject is concerned we may safely leap over 500 years to the epoch of St. Thomas Aquinas (1225–74), whose Summa Theologica is in the history of thought what the south-western spire of the Cathedral of Chartres is in the history of architecture." There is little recognition of the role of Arab scholars in maintaining and expanding the knowledge of classical antiquity in almost all fields. And in the field that eventually would be associated with political economy, Khaldun's Muqaddimah, or Introduction (or Prolegomena), does indeed provide significant progress over the work of classical antiquity.

His work essentially deals with the cyclical rise and fall of caliphates, and analyzes the material conditions for these historical circumstances. Robert Irwin in his intellectual biography of Khaldun, reminds us that: “Arnold Toynbee, who produced a twelve-volume study of the rise and fall of civilizations, described Ibn Khaldun’s theoretical treatise on history, the Muqaddima, as 'undoubtedly the greatest work of its kind that has ever been created by any mind in any time or place'.”

However, while all of that is correct, and should lead to a more encompassing understanding of the role of non-western economic thinking, it is also important to bear in mind what was the contribution of Ibn Khaldun, how it fits in the history of ideas, and also in what sense classical political economy authors have an original theoretical framework. That tradition, it is worth noticing starts really with Sir William Petty, not Smith, as noted by whom I would suggest is the first serious historian of economic ideas, Karl Marx, in his Theories of Surplus Value. Furthermore, it is important to be careful and avoid the normal confusion of seeing Adam Smith as the father of modern, meaning marginalist (or neoclassical), economics. As a general principle, I would also be critical of the notion that the history of economic ideas is the repository of old versions of modern economic theory, that have to be deciphered and understood in modern guise. It was exactly this kind of thinking that led many marginalists, like Alfred Marshall, to suggest that they were expanding on the ideas of classical authors like David Ricardo, when in fact they were subverting them.***

I would suggest that there are two important differences between Ibn Khaldun and the Anglo-French tradition of the surplus approach, associated with the Petty-Cantillon-Quesnay-Smith-Ricardo (and I would add Marx; on the first three that form the basis for the work of the surplus approach see this chapter by Tony Aspromourgos) line of evolution. First, while Khaldun is interested in the cyclical rise and fall of civilizations, associated to the sedentary, urban, mercantile caliphates bordered by nomadic, desert populations, Smith developed at the same time and independently from Turgot (on that see Ronald Meek), a linear four stage theory of economic development, from hunting (and gathering), to pastoral, then agricultural, and finally commercial societies, which is the term he used for societies like the England of the time, were manufacturing activities and financial relations were significantly developed. These ideas would lead to Marx's materialist conception of history based on the notion of modes of production, evolving from ancient slavery and feudalism to capitalism.

It seems that while a perception that, what we now call, the social sciences are historical in nature was clearly in Khaldun's writings, the conception of history, and the scope of the analysis was different than the one in Smith. The reason is not only related to the fact that Khaldun was writing in the Middle Ages, before the rise of capitalism, but also, and more importantly it seems, Khaldun was looking at the specific circumstances of Arab societies, even if there were universal lessons in his analysis. The evolution from hunter-gathering to agriculture and to manufacturing are more universal. Further, Marx's conception of modes of production emphasizes the method and the social relations of production by which surplus is extracted from workers. Command and coercion in the context of slave and feudal societies, and market relations in the case of capitalism.

The second difference is related to the notion of surplus, and the source of value. It is true that there was a notion of a surplus beyond what is needed for survival in Khaldun's work, and that it allowed in his view for crafts and division of labor, or specialization, as would be discussed by classical authors much later. And there was also a clear sense that labor was the source of value, and that a producer must cover the costs of production. Some have argued that one can see the labor theory of value (LTV) in Khaldun's writings. However, it is clear that the conception of profits and of prices in Khaldun was not in conformity with the LTV.

He argues in chapter 5 of the Muqaddimah that: "Commerce is a natural way of making profits. However, most of its practices and methods are tricky and designed to obtain the (profit) margin between purchase prices and sales prices. This surplus makes it possible to earn a profit." In other words, the surplus results from selling at a higher price than purchased in the process of exchange. Profits do not come as a residual  in the process of production for Khaldun, after the conditions for reproduction of society, in particular the subsistence of the labor force, was obtained. This is, of course, the whole point of classical political economy. The understanding of the objective, material conditions for the reproduction of society. And that would allow to understand accumulation, since the surplus is the basis for economic growth. Accumulation and not the cyclical fluctuations of civilizations were at the center of classical political economy analysis, reflecting, perhaps, the dynamic nature of capitalist societies.

These differences suggest that Khaldun is most likely an important source for scholastic, mercantilist/cameralist authors to which classical authors were to some extent responding in their own writings. Mercantilists authors also thought in terms of profits in the process of exchange, which was to some extent to be expected in pre-capitalist societies with a large mercantile sector. These were essentially agrarian societies, and the transformation of the structure of production was not yet significant.  Recognizing the role of Arab scholars in preserving the texts and the knowledge of ancient scholars, and their ability to move beyond the ancients is crucial for the proper understanding of the evolution of economic ideas. But it is important understand their actual contributions to avoid more confusion in the history of ideas.

* In this piece it is suggested that the history of thought textbooks by Screpanti and Zamagni and by Roncaglia are mainstream texts, and put in the same category with Blaug's book. That is of course a misconception. The former differentiate between classical and marginalist traditions, and do not argue for the continuity, as Blaug does, and can be seen as clearly heterodox in nature.

** Spengler (1964) is the classic study on Khaldun by western historians of economic thought. Although his essay is careful about Khaldun's contribution it might give to much credence to the notion that the "economic literature of Islam can be traced to the Economics of Bryson", for the ancient Greek philosopher.

** It is worth noticing that the piece cited at the beginning suggests that Khaldun is a precursor of Smith, presumably because of the division of labor, but without a distinction of productive and unproductive activities, but also of Alfred Marshall. We are told that Khaldun "analyzed markets which arise based on the division of labor and examined market forces in a simple didactic way which is very similar to the attitude of Alfred Marshall. The invention of supply and demand analysis wasn’t invented in the 19th century: the islamic scholar also described the relationship of demand and supply." Supply and demand forces were well-known before Khaldun. Marginalism suggested that long-term prices, what Smith called natural prices, were determined by those forces.

Econ Prof at @BucknellU Co-editor of ROKE & Co-Editor in Chief of the New Palgrave Dictionary of Economics
My articlesMy siteMy books
Follow on:TwitterLinkedIN
Previous Heterodox Challenges in Economics by Sergio Cesaratto
Next The worldly philosophers go to Washington: Episode 3, Farmer and Merchants

For the love of the planet