by
Matias Vernengo
My articles My siteMy booksMy videos
Follow on:TwitterLinkedIN
Summary:
Friedman's adviseesZachary Carter, of Price of Peace fame (a good book that I recommend, btw), wrote an interesting piece on Milton Friedman's legacy, which I think is, as Hyman Minsky said of Joan Robinson's work, wrong in incisive ways. But even before we get to his main point, that the era of Friedmanomics is gone, it is worth thinking a bit about the way he approaches the history of ideas. This is clearly a moral tale for Carter, with good guys and bad guys. Gunfight at high noon. It is more about vision than analysis, in the terminology of Schumpeter.He starts, like Nancy MacLean in her Democracy in Chains -- I discussed only tangentiallythe issue here -- with Brown v. Board of Education, and Friedman's, rather than Buchanan's, insidious behavior favoring policies that allowed the


Matias Vernengo writes What is heterodox economics? Some clarifications

Course/discussion: A very short Introduction to the theory of value and distribution 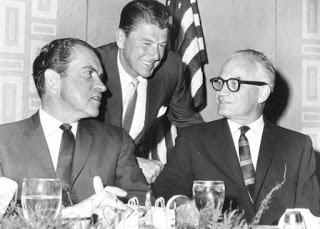 Zachary Carter, of Price of Peace fame (a good book that I recommend, btw), wrote an interesting piece on Milton Friedman's legacy, which I think is, as Hyman Minsky said of Joan Robinson's work, wrong in incisive ways. But even before we get to his main point, that the era of Friedmanomics is gone, it is worth thinking a bit about the way he approaches the history of ideas. This is clearly a moral tale for Carter, with good guys and bad guys. Gunfight at high noon. It is more about vision than analysis, in the terminology of Schumpeter.

He starts, like Nancy MacLean in her Democracy in Chains -- I discussed only tangentially
the issue here -- with Brown v. Board of Education, and Friedman's, rather than Buchanan's, insidious behavior favoring policies that allowed the persistence of segregation. He tells us that: "it is hard to believe Friedman was merely naïve and not breathtakingly cynical about these political judgments, particularly given the extreme rhetoric he used to attack anti-discrimination efforts." Yet, as he continues he seems to change his mind and argue that: "yet he appears to have genuinely believed what he said about markets eliminating racism." So it seems he was naïve after all, according to Carter.
Of course, to determine whether Friedman was cynical or naïve is a thankless task and somewhat besides the point. Friedman was analytically wrong. There is a reason Schumpeter's monumental book is A History of Economic Analysis, and not of economic ideology. And Carter argument is built on moral, ideological grounds. Friedman is the bad guy. He tells us that: "[t]he chief political disputes of the 1950s and 1960s, as today, really were about moral values, not technical predictions." Don't get me wrong, vision matters, and it's hard to disentangle from analysis, but it is clear that Friedman's views differed analytically from the ones discussed by the Keynesian disciples at Cambridge (less so in the case of some of the Neoclassical Synthesis Keynesians that came to accept Friedman's notion of a natural rate of unemployment by the late 1960s). But it is hard to say that Friedman was for segregation, when he explicitly says he was against, and Carter himself thinks that he might have been sincere about that. Other than finding archival material that shows that Friedman knew better we are left with conjecture and guess work.
The key analytical differences between Friedman and the more heterodox Keynesians I alluded above, were not so much in his classic book on monetary history with Anna Schwartz, cited by Carter, but in his AEA presidential address from 1968. The return of the natural rate was the foundation that allowed, once the political circumstances were ripe for the demise of the Golden Age, for the return of marginalist analysis. In a sense, the notion of a natural rate of unemployment went full circle and added to the Neoclassical Synthesis notion that Keynes was fundamentally about wage rigidities or other imperfections. Note that this happened after the capital debates, when the logical foundations of the neoclassical theory was in shambles. In favor of Friedman, I might add, he did write the analytical model down in the debate with his critics, in contrast with Hayek, that after abandoning economics in the 1940s dedicated himself to ideological discussions without any analysis. Vision without analysis as my good friend Fabio Freitas poignantly says.
Carter is on firmer ground when he argues that Friedman was not a classical liberal, and had little in common with Adam Smith, although Friedman himself might have thought so; understanding of history of ideas is sadly vey uncommon among economists. Carter tells us that: "Friedman preferred to be identified as either a 'neoliberal' or a 'classical liberal,' invoking the prestige of the great eighteenth- and nineteenth-century economists—while conveniently gliding past their often profound differences with his political project. (John Stuart Mill, for instance, identified as a 'socialist,' while Adam Smith supported a variety of incursions against laissez-faire in the name of the public interest)." The differences with Smith were not fundamentally political though, but analytical (Stuart Mill is a more complicated transition author). Markets did not produce efficient allocation of resources or full employment of labor for Smith, as in the Marshallian world of Friedman and the Chicago School.
At any rate, the notion that Friedmanomics (or Neoliberalism for that matter; on that here) is dead is at best an exaggeration. In part, the misdiagnosis results from Carter's view according to which: "Friedman’s major theoretical contribution to economics—the belief that prices rose or fell depending on the money supply— simply fell apart during the crash of 2008." That's definitely not the main lesson from Friedmanomics. The quantity theory was never particularly dominant. It was a return to the simple notions of marginalism, of the theory of value, that suggests that supply and demand produce optimal outcomes, that lead to full employment, and that can fix all sort of social maladies (including racism, as Carter notes correctly) that was central to Friedmanomics, and neoliberalism.
In other words, his main legacy was the idea that the market society is a panacea. That free markets are prerequisite for a democratic society (Hayek was more forceful in that argument, without even trying to provide the analytical foundations). Something used cynically to favor the interests of a narrow group by the politicians Friedman advised (the three on top, for example). And while it is true that the last financial crisis (the 2008 one) has led to a reassessment of the role of government, and more so with the pandemic, as I discussed here, the notion that Friedmanomics is gone is wishful thinking.
Even though the profession has abandoned Friedman's Marshallian version of marginalism, his notion that markets do produce optimal outcomes has received no serious challenge within academia, and, in policy circles, interventions follow a pragmatic notion that market imperfections are worse than government imperfections. But that could change rapidly, like Larry Summers support for expansionary fiscal policies. Friedmanomics will certainly make a come back.
Buchanan Capital Controversy Carter Hayek History of Economics Milton Friedman Neoliberalism racism Schumpeter Summers 2021-06-22
Matias Vernengo
Full story here
Are you the author?
0 0

Econ Prof at @BucknellU Co-editor of ROKE & Co-Editor in Chief of the New Palgrave Dictionary of Economics
My articlesMy siteMy books
Follow on:TwitterLinkedIN
Previous Was Keynes a Liberal or a Socialist?
Next From developmental to failed state