by
David F. Ruccio
My articles My siteMy booksAbout me
Follow on:Twitter
Summary:
From David Ruccio Mainstream economists continue to discuss the two great crises of capitalism during the past century like the pillars of society in the brothel—a “house of infinite mirrors and theaters”—in Jean Genet’s The Balcony.* The order they represent is indeed threatened by an uprising in the streets, and the only question is: can they reestablish the illusion of control? The latest version of the absurdist economic play opens with Brad DeLong, who dons the costume of the liberal mainstream economist and argues that, while the Great Depression of the 1930s was far deeper than the Great Recession (what I have long referred to as the Second Great Depression), the recovery from the crash of 2007-08 was so mishandled that it casts a shadow over the U.S. economy in a way the 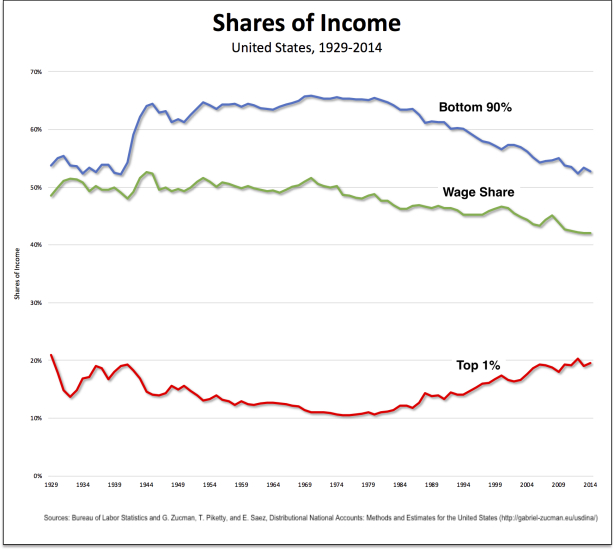 Mainstream economists continue to discuss the two great crises of capitalism during the past century like the pillars of society in the brothel—a “house of infinite mirrors and theaters”—in Jean Genet’s The Balcony.* The order they represent is indeed threatened by an uprising in the streets, and the only question is: can they reestablish the illusion of control?

The latest version of the absurdist economic play opens with Brad DeLong, who dons the costume of the liberal mainstream economist and argues that, while the Great Depression of the 1930s was far deeper than the Great Recession (what I have long referred to as the Second Great Depression), the recovery from the crash of 2007-08 was so mishandled that it casts a shadow over the U.S. economy in a way the first Great Depression did not.

now we are haunted by our Great Recession in a sense that our predecessors were not haunted by the Great Depression. Looking forward, it appears that we will be haunted for who knows how long. No unbiased observer projects anything other than slow growth, much slower than the years during and after World War II. Nobody is forecasting that the haunting will cease — that the shadow left from the Great Recession will lift.

Basically, DeLong blames two groups—conservative mainstream economists and policymakers (“including the decision makers at the top in the Obama administration”)—for a recovery that was both too long and too slow. The first claims the monetary and fiscal policies that were adopted were wrongheaded from the start, and fought every attempt to sustain or expand them. The second group claims they prevented a second Great Depression and refuses to acknowledge the failure of the policies they devised and adopted.

The customer who dresses up as a representative of the conservative wing of mainstream economics, Robert Samuelson, expresses his sympathy with DeLong’s analysis but considers it be overstated. Samuelson’s view is that slow growth is not caused by the shadow cast by inadequate economic policies, but is the more or less inevitable result of two exogenous events: reduced growth of the labor force and slower growth in productivity.

The retirement of baby-boom workers would have occurred without the Great Recession. The slowdown in productivity growth — reflecting technology, management and worker skills — is not well understood, but may also be independent of the Great Recession.

This is exactly what is to be expected in the high-end economic brothel. It’s a debate confined to growth rates and the degree to which economic policies or exogenous factors should ultimately shoulder the blame of the crisis of legitimacy of the current economic order. Each, it seems, wants to play the fantasy of the Chief of Police in order to create the illusion of restoring order.**

What DeLong and Samuelson choose not to talk about are the fundamental differences between the response to the 1929 crash and the most recent crisis of capitalism. As is clear from the data in the chart at the top of the post, the balance of power was fundamentally altered as a result of the New Deals (the first and especially the second), which simply didn’t occur in recent years. After 1929, the wage share (the green line) remained relatively constant, even in the face of massive unemployment—and eventually, as a result of a whole series of other policies (from regulating the financial sector through jobs programs to unleashing a wave of labor-union organizing), the shares of national income going to the bottom 90 percent (the blue line) and the top 1 percent (the red line) moved in opposite directions. The current recovery has been quite different: a declining wage share (which, admittedly, continues a decades-long slide), the bottom 90 percent losing out and the top 1 percent resuming its rise.

And the reason? As I see it, what was happening outside the brothel, in the streets, explains the different responses to the two crashes. It was the Left—in the form of political parties (Socialist, Communist, and the left-wing of the Democratic Party), but also labor unions, councils of the unemployed, academics, and so on—that pushed the administration of Franklin Delano Roosevelt and Congress to adopt policies that moved beyond restoring economic growth to fundamentally restructure the U.S. economy (which, of course, continued during and after the war years).*** Nothing similar happened in the United States after 2008. As a result, the policies that were discussed and eventually adopted only meant a recovery for large corporations and wealthy households. Everyone else has been left to battle over the scraps—attempting to get by on low-paying jobs retirement incomes based on volatile stock markets, with underwater mortgages and rising student debt, and facing out-of-control healthcare costs.****

It should come as no surprise, then, that the elites who continue to play out their fantasies in the house of mirrors have lost the trust of ordinary people. Unfortunately, in the wake of the Second Great Depression, it’s clear that new masqueraders have been willing to don the costumes and continue the fantasy that the old order can be restored.

Only a fundamental rethink, which rejects all the illusions created within the economic bordello, will chart a path that is radically different from the recoveries that followed both great crises of capitalism of the past hundred years.

*I saw my first production of “O Balcão” at Sao Paulo’s Teatro Oficina in 1970, as a young exchange student during one of the most repressive years of the Brazilian dictatorship. Staging Genet’s play at that moment represented both a searing critique of the military regime and an extraordinary act of resistance to government censorship.

**Much the same can be said of a parallel debate, between Joseph Stiglitz and Lawrence Summers.

***Even then, we need to recognize how limited the recovery from the first Great Depression was. Amidst all the changes and new regulations, leaving control of the surplus in private hands left large corporations with the interest and means to circumvent and ultimately eliminate the New Deal regulations, thus creating the conditions for the Second Great Depression.

****As Evan Horowitz has shown, roughly 14 percent of workers have seen no raise over the past year (counting only those who have stayed in the same job). That means, with inflation, their real wages have fallen. Moreover, “when a large share of workers get passed over for raises, wage growth for all workers tends to remain slow in the year ahead.”

I am now Professor of Economics “at large” as well as a member of the Higgins Labor Studies Program and Faculty Fellow of the Joan B. Kroc Institute for International Peace Studies. I was the editor of the journal Rethinking Marxism from 1997 to 2009. My Notre Dame page contains more information. Here is the link to my Twitter page.
My articlesMy siteMy booksAbout me
Follow on:Twitter
Previous Polanyi and Keynes on the idea of ‘self-adjusting’ markets
Next Climate change: threats and challenges