by
Editor
My articles My siteMy books
Follow on:Twitter
Summary:
From Shimshon Bichler and Jonathan Nitzan A new, capitalism-denying book is on the shelves, and it makes a stunning discovery: ‘Capitalism without competition is not capitalism’! Distortions: Capitalism Denied Capitalist crisis, like climate change, tends to breed ‘capitalism deniers’. The problem, argue the deniers, lies not in capitalism but in its ‘distortions’. In its pure form, they maintain, capitalism is the best of all possible worlds. But to the deniers’ chagrin, contemporary capitalism is no longer pristine. Unlike its original, once-upon-a-time version, its current one is subject to distorting ‘imperfections’, ‘shocks’ and ‘exogenous’ events. And it is these aberrations – rather than capitalism itself – that should be blamed for the system’s misfortunes. The Death of

from Shimshon Bichler and Jonathan Nitzan

A new, capitalism-denying book is on the shelves, and it makes a stunning discovery: ‘Capitalism without competition is not capitalism’! 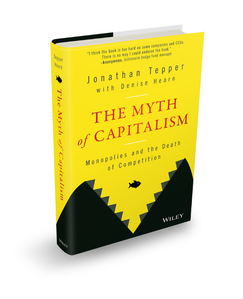 Capitalist crisis, like climate change, tends to breed ‘capitalism deniers’. The problem, argue the deniers, lies not in capitalism but in its ‘distortions’. In its pure form, they maintain, capitalism is the best of all possible worlds. But to the deniers’ chagrin, contemporary capitalism is no longer pristine. Unlike its original, once-upon-a-time version, its current one is subject to distorting ‘imperfections’, ‘shocks’ and ‘exogenous’ events. And it is these aberrations – rather than capitalism itself – that should be blamed for the system’s misfortunes.

The Death of Competition

According to Tepper and Hearn’s The Myth of Capitalism (2019), growing economic malaise and the coming economic crisis are the result not of too much capitalism, but of too little.

The main culprit, they argue, is the ‘death of competition’, which they view as a mortal threat to their beloved social order. According to their book’s inside flap,

Capitalism is the greatest economic system in history. It has lifted people from poverty and created widespread wealth for billions of people. Unfortunately, the so-called capitalism that exists in today’s United States is the antithesis of a competitive marketplace. Monopolies and oligopolies dominate the economy, with a few winners and millions of losers. The Myth of Capitalism explains how we got to this state and clearly points the way back to open markets that work for everyone. Capitalism without competition is not capitalism, but in industry after industry, competition is dying.

‘Without competition’, they warn, ‘everyone suffers’:

But it doesn’t have to be this way:

In other words, all we need to do is reboot the system back to its pristine state of perfect competition and bliss will be upon us all. The solution seems so obvious that even the cautious Economist of London joined the competitive bandwagon, cheerleading the forthcoming capitalist revival under the fail-proof banner of ‘The Next Capitalist Revolution’ (Anonymous 2018a, 2018b).

But then, why concentrate only on dwindling competition?  What about irrational agents and disequilibrium, large governments and public institutions, ideologies and religion, war and violence, paper money and fictitious credit, incomplete information and an unknowable future, to name a few of the system’s many ‘distortions’? Aren’t these distortions equally destructive of ‘true’ capitalism? And since these distortions have been blamed for plaguing capitalism from its very once-upon-a-time beginning, maybe there was never such a thing as ‘pure capitalism’ to start with?

Indeed, what if purely competitive capitalism is simply a smokescreen for hiding the inherent realities of power? After all, it is not for nothing that John D. Rockefeller insisted that his best investment ever was the $45 million he donated to rebuild the Baptist University of Chicago – an investment whose principal return was an elegant neoclassical dogma that ignored corporate giants like his Standard Oil of New Jersey and made dominant owners like himself perfectly invisible. Could it be that capitalism, from its very inception and by historical necessity, developed not as a competitive mode of production and consumption, but as a complex mode of power?

A few years ago, we had a tongue-in-cheek exchange (Bichler and Nitzan 2014) on this subject with Mr. X, an enlightened-investor-cum-capitalism-denier who blamed us for spreading fake news about the system’s true nature. According to Mr. X, it was easy to see that the world we lived in wasn’t capitalist at all, but statist.

His view, which we summarized in our exchange, is typical of many fellow deniers and therefore worthy of reiterating at some length:

Real capitalism has no distorting entities. It has no government, no central bank, no judicial system, no courts, no police and no jails. It has no army, no ideology, no public education or public transportation. It has no paper money, no enforced units of measure and probably no common language. It also has no corporate coalitions, labour unions and NGOs. And, as educators, it is our duty to present this true vision of capitalism to our students. Otherwise, they might end up confusing the world around them for reality.

The original state of nature. Now, once upon a time there existed a real, undistorted capitalist system as outlined above. In this true system, money was weighed in gold and the price of a commodity reflected its true value. Regrettably, though, true capitalism no longer exists. Somewhere along the way, and for totally exogenous reasons, it gave way to a distorted statist system. In this new system, money is monopolized by the government and private banks. Together, they create private credit out of thin air and then force the rest of us to use this credit as if it were ‘real money’. 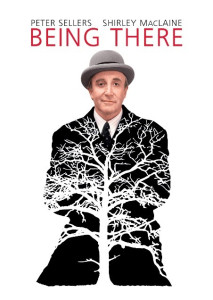 Unlike true capitalism, distorted statism is manifestly unfair. Statism favours large corporations, which in turn influence governments and the banks to give them cheap credit – while at the same time screwing the ‘unconnected’ little guy. The situation is particularly bad during crises, when the banks don’t create enough credit for everyone. Now, to repeat, this setup has absolutely nothing to do with true capitalism. In fact, and here you might want to hold onto your seat, the executives and owners of firms that rely on the government – i.e., the S&P 500 that Mr. X tries so hard to outperform – are not capitalists at all!

So who are the real capitalists? If you haven’t guessed it by now, real capitalists are those who never accumulate. To be a real capitalist, you have to either lose money or break even with enough income to survive. You see, capitalism is just like nature: it thrives on growth as well as decomposition (a Marshallian metaphor that Chauncey Gardiner, the protagonist of Jerzy Kosinski’s 1971 book Being There, would merrily concur with). Moreover, many real capitalists are perfectly happy with a steady state (fixed profit?). The only reason they might seek growth (more profit?) is to offset the inflation created by the false system of private credit money. Remove the curse of false money (along with the other distortions), and capitalism would immediately converge to a stable metabolic equilibrium.

From: Shimshon Bichler and Jonathan Nitzan, ‘The Enlightened Capitalist’, Philosophers for Change, May 6, (2014).

Although it may sound funny, this really isn’t a laughing matter.

Capitalism’s deniers, like other religious fundamentalists, can be very dangerous. In its extreme form, fundamentalism is highly combative. It protests and condemns the corrupt apparatus of the ruling church, blames it for serving and collaborating with the political regime, curses it with extinction and sets up counter-organizations to wreck havoc, violently if necessary, in order to re-establish the true faith.

This is the path followed by the Wahabis, who together with the House of Saud imposed their cruel regime on Saudi Arabia; by Middle East Shiites, who have been fighting Sunnis (and each other); by fundamentalist Sunnis like Al-Qaeda and ISIS who have been combatting Shiites (and each other); and by government-sanctioned Jewish ‘settlers’ of the Rabbinate Church, who for the past half century have been waging a holy war against the rest of the world.

And the list doesn’t stop here. Other examples include fundamentalists like Mao Zedong, who unleashed the Cultural Revolution in China; Pol Pot, who eliminated millions in the Killing Fields of Cambodia; and the English Puritans, whose descendants founded American capitalism, drenched in the sweat and blood of Native Americans and African slaves.

So, when born-again free marketers begin to attack their own church (in this case, the big capitalists and their leading corporations) for serving and collaborating with the political regime (namely, the ‘policy makers’ and ‘regulators’ of the ‘state’), when they demand that their country be made ‘great again’ by restoring ‘free competition’, returning to the ‘gold standard’ and dismantling ‘regulation’, and when they begin setting up ‘tea parties’ to overthrow the anti-capitalist ‘deep state’, there is good reason to start worrying about peace on earth.

Anonymous. 2018a. An Age of Giants. The Economist, November 17, pp. 4.
Anonymous. 2018b. The Next Capitalist Revolution. The Economist, November 17, pp. 13.
Bichler, Shimshon, and Jonathan Nitzan. 2014. The Enlightened Capitalist. Philosophers for Change, May 6.
Tepper, Jonathan, and Denise Hearn. 2019. The Myth of Capitalism. Monopolies and the Death of Competition. Hoboken, New Jersey: John Wiley & Sons.

My articlesMy siteMy books
Follow on:Twitter
Previous 20th anniversary for the euro — no reason for celebration
Next new issue of WEA Commentaries

December jobs report: 2018 goes out with a bang