by
David F. Ruccio
My articles My siteMy booksAbout me
Follow on:Twitter
Summary:
From David Ruccio The American Dream is dead. Long live the American Dream! Let me explain. The official American Dream, the one that has been produced and disseminated at least as far back as the transition from the farm to the factory (in other words, since the late-nineteenth century), lies in tatters. Americans have long been encouraged to believe that everyone gets what they deserve—and, with equal opportunity, those who start at the bottom have a real chance of working their way to the top. Within generations, all workers had a chance to “make it.” And, between generations, children would likely be better off than their parents. That promise—let’s call it the capitalist American dream—is now in tatters. It is dead and (almost) buried. It’s not the first time, of course, that the

Lars Syll writes The value of economics — a cost-benefit analysis

The value of economics — a cost-benefit analysis

A tale of two capitalisms

Let me explain. The official American Dream, the one that has been produced and disseminated at least as far back as the transition from the farm to the factory (in other words, since the late-nineteenth century), lies in tatters. Americans have long been encouraged to believe that everyone gets what they deserve—and, with equal opportunity, those who start at the bottom have a real chance of working their way to the top. Within generations, all workers had a chance to “make it.” And, between generations, children would likely be better off than their parents.

That promise—let’s call it the capitalist American dream—is now in tatters. It is dead and (almost) buried.

It’s not the first time, of course, that the capitalist American Dream has been called into question. During the Great Depression of the 1930s, American capitalism was not able to deliver the goods, at least for the majority of the population. Widespread unemployment and poverty, as capitalists shuttered their factories were shuttered and banks foreclosed on farms, meant that most Americans were faced with an economic nightmare. And much the same happened after the crash of 2007-08 when, in the midst of the Second Great Depression, millions of Americans were unable to find a decent job or purchase (unless they went further into debt) the necessary goods and services, for themselves and their children. 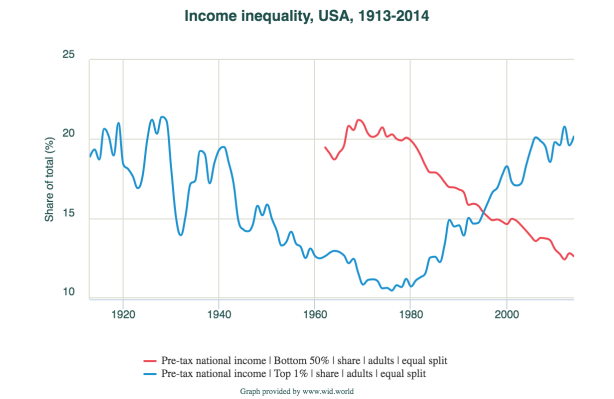 The one major difference, of course, is that, while economic inequality fell after the first Great Depression, it actually resumed its upward trajectory during the so-called recovery from the Second Great Depression.

We also have to remember that that American Dream was only ever partial and incomplete. It was a promise but it really only held during the immediate postwar period. And, even then, only for white working-class families; Blacks and hispanics were mostly excluded, at least until the Civil Rights movement took hold. It also depended on the hegemony of the American economy, Pax Americana, after the recovery from the economic collapse and the destruction elsewhere occasioned by World War II.

Those conditions ended in the 1970s and, with stagnant wages and growing inequality culminating in the crash of 2007-08, one American Dream has died. One response to that ignominious death was the election of Donald Trump, who arose from the carnage and stands over it with his enablers, who have no interest in doing anything but to enrich themselves.

But there’s another American Dream that has captured the imagination of farmers and workers, young and old, for at least as long as the official one. It’s a dream of democracy and equality, of collective solidarity, that has animated many political and social movements and become enshrined in myriad policies and programs. Let’s call this one the socialist American Dream.

That’s the dream Americans have invoked to organize labor unions and farmer- and worker-owned cooperatives. It’s what has inspired attempts to expand the political franchise—to women and ethnic and racial minorities—and to create government programs whereby citizens help one another and force those at the top to participate. As a result, Americans have created progressive income taxes, a minimum wage, food stamps (now supplemental nutrition assistance), health and safety regulations, Social Security, Medicaid and then Medicare, environmental regulations, and now Medicare for All and a Green New Deal.

The ultimate historical irony is that the socialist American Dream made the capitalist American Dream possible. Without unions and cooperatives, and in the absence of social welfare programs whereby a portion of the surplus has been captured and distributed so that citizen-workers collectively could help one another, the official American Dream would have remained a myth. That is was a reality, at least for many and for a certain period of time, was due at least in part because of the existence of a socialist dream of betraying and moving beyond a capitalist logic of organizing economic and social life in the United States.

Moreover, the capitalist American Dream of individual success and intergenerational mobility began to unravel precisely when the socialist American Dream came under attack. The concerted attempt to weaken labor unions—not to mention, first, to halt the expansion of social programs and, then, to actively restrict access to them, accompanied by new ways of highjacking the electoral process—undermined American workers’ ability for themselves and for their children to get ahead. Ultimately, it ended any attempt they had at the official American Dream.

Why does the intertwining of these two American Dreams matter? Right now, it has enormous consequences because of the movement to unseat Trump and the ongoing debate inside the Democratic Party. I’m thinking, in particular, of the left-wing of the Democratic Party, represented by the democratic socialist Bernie Sanders and the radical populist Elizabeth Warren. As I see it, Sanders has long championed the socialist American Dream while Warren has been positioned, by her campaign and by those who see her as the capitalist alternative to Sanders, as rescuing the official American Dream with more progressive policies.

In my view, both Sanders and Warren would be better served by understanding the history of the two American Dreams. As I argued back in 2015, needs to drop the references to Canada and the Scandinavian countries and make the case that socialism—democratic socialism—has long been an American Dream.* And Warren, if she wants to live up to the aspirations of the Working Families Party (which just endorsed her), has to highlight the ways her policies will transform the economy in a manner that “fights for workers over bosses and people over the powerful”—in other words, that extends the socialist American Dream.

The death knell of one American Dream, symbolized tragically and with vengeance by Trump’s presidency, creates even more space for another American Dream, a socialist one, with its own long, rich history.

*During the third Democratic debate, in response to an inane question about the main differences between his “kind of socialism and the one being imposed in Venezuela, Cuba and Nicaragua,” Sanders responded: “I’ll tell you what I believe in terms of democratic socialism. I agree with goes on in Canada and in Scandinavia, guaranteeing health care to all people as a human right.”

I am now Professor of Economics “at large” as well as a member of the Higgins Labor Studies Program and Faculty Fellow of the Joan B. Kroc Institute for International Peace Studies. I was the editor of the journal Rethinking Marxism from 1997 to 2009. My Notre Dame page contains more information. Here is the link to my Twitter page.
My articlesMy siteMy booksAbout me
Follow on:Twitter
Previous The lack of positive results in econometrics
Next Nordhaus dangerous gamble for humanity’s future