Home / Real-World Economics Review / What is (wrong with) mainstream economics?

What is (wrong with) mainstream economics?

by
Lars Syll
My articles My siteMy booksAbout me
Follow on:Twitter
Summary:
From Lars Syll If you want to know what is neoclassical economics — or mainstream economics as we call it nowadays — and turn to Wikipedia you are told that neoclassical economics is a term variously used for approaches to economics focusing on the determination of prices, outputs, and income distributions in markets through supply and demand, often mediated through a hypothesized maximization of utility by income-constrained individuals and of profits by cost-constrained firms employing available information and factors of production, in accordance with rational choice theory. The basic problem with this definition of neoclassical (mainstream) economics — arguing that its differentia specifica is its use of demand and supply, utility maximization and rational choice — is that it

On causality and econometrics 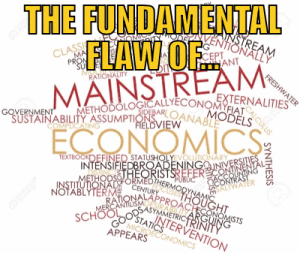 neoclassical economics is a term variously used for approaches to economics focusing on the determination of prices, outputs, and income distributions in markets through supply and demand, often mediated through a hypothesized maximization of utility by income-constrained individuals and of profits by cost-constrained firms employing available information and factors of production, in accordance with rational choice theory.

The basic problem with this definition of neoclassical (mainstream) economics — arguing that its differentia specifica is its use of demand and supply, utility maximization and rational choice — is that it doesn’t get things quite right. As we all know, there is an endless list of mainstream models that more or less distance themselves from one or the other of these characteristics. So the heart of mainstream economic theory lies elsewhere.

The essence of mainstream economic theory is its almost exclusive use of a deductivist methodology. A methodology that is more or less used without a smack of argument to justify its relevance.

The theories and models that mainstream economists construct describe imaginary worlds using a combination of formal sign systems such as mathematics and ordinary language. The descriptions made are extremely thin and to a large degree disconnected to the specific contexts of the targeted system than one (usually) wants to (partially) represent. This is not by chance. These closed formalistic-mathematical theories and models are constructed for the purpose of being able to deliver purportedly rigorous deductions that may somehow be exportable to the target system. By analyzing a few causal factors in their “laboratories” they hope they can perform “thought experiments” and observe how these factors operate on their own and without impediments or confounders.

Unfortunately, this is not so. The reason for this is that economic causes never act in a socio-economic vacuum. Causes have to be set in a contextual structure to be able to operate. This structure has to take some form or other, but instead of incorporating structures that are true to the target system, the settings made in economic models are rather based on formalistic mathematical tractability. In the models they appear as unrealistic assumptions, usually playing a decisive role in getting the deductive machinery to deliver “precise” and “rigorous” results. This, of course, makes exporting to real-world target systems problematic, since these models – as part of a deductivist covering-law tradition in economics – are thought to deliver general and far-reaching conclusions that are externally valid. But how can we be sure the lessons learned in these theories and models have external validity when based on highly specific unrealistic assumptions? As a rule, the more specific and concrete the structures, the less generalizable the results. Admitting that we can move from (partial) falsehoods in theories and models to truth in real-world target systems does not take us very far unless a thorough explication of the relation between theory, model and the real world target system is made. If models assume representative actors, rational expectations, market clearing and equilibrium, and we know that real people and markets cannot be expected to obey these assumptions, the warrants for supposing that conclusions or hypothesis of causally relevant mechanisms or regularities can be bridged, are obviously non-justifiable. To have a deductive warrant for things happening in a closed model is no guarantee for them being preserved when applied to an open real-world target system.

Henry Louis Mencken once wrote that “there is always an easy solution to every human problem – neat, plausible and wrong.” And mainstream economics has indeed been wrong. Its main result, so far, has been to demonstrate the futility of trying to build a satisfactory bridge between formalistic-axiomatic deductivist models and real-world target systems. Assuming, for example, perfect knowledge, instant market clearing and approximating aggregate behaviour with unrealistically heroic assumptions of representative actors, just will not do. The assumptions made, surreptitiously eliminate the very phenomena we want to study: uncertainty, disequilibrium, structural instability and problems of aggregation and coordination between different individuals and groups.

The punch line is that most of the problems that mainstream economics is wrestling with, issues from its attempts at formalistic modelling per se of social phenomena. Reducing microeconomics to refinements of hyper-rational Bayesian deductivist models is not a viable way forward. It will only sentence to irrelevance the most interesting real-world economic problems.

If the ultimate criterion of success of a deductivist system is to what extent it predicts and coheres with (parts of) reality, modern mainstream economics seems to be a hopeless misallocation of scientific resources. To focus scientific endeavours on proving things in models is a gross misapprehension of what an economic theory ought to be about. Deductivist models and methods disconnected from reality are not relevant to predict, explain or understand real-world economic target systems. These systems do not conform to the restricted closed-system structure the mainstream modelling strategy presupposes.

What is wrong with mainstream economics is not that it employs models per se, but that it employs poor models. They are poor because they do not bridge to the real-world target systems in which we live. Hopefully humbled by the manifest failure of its theoretical pretences, the one-sided, almost religious, insistence on mathematical deductivist modelling as the only scientific activity worthy of pursuing in economics will give way to methodological pluralism based on ontological considerations rather than formalistic tractability.

Lars Jörgen Pålsson Syll (born November 5, 1957) is a Swedish economist who is a Professor of Social Studies and Associate professor of Economic History at Malmö University College. Pålsson Syll has been a prominent contributor to the economic debate in Sweden over the global financial crisis that began in 2008.
My articlesMy siteMy booksAbout me
Follow on:Twitter
Previous Dying too young
Next Digitalization and the transnational corporations. Rethinking economics