by
David F. Ruccio
My articles My siteMy booksAbout me
Follow on:Twitter
Summary:
From David Ruccio We already had high food insecurity in this country and now we are putting another layer of need on top of it. — Kevin M. Fitzpatrick One of the many irrational characteristics of capitalism is that billions of tons of food go to waste while hundreds of millions of people struggle with hunger on a daily basis. And like all the other senseless attributes of the way the economy is currently organized, the mismatch between the enormous quantity of food that is available for human consumption but is not consumed and the vast number of people who are food insecure has been highlighted and heightened by the COVID-19 pandemic—especially in the United States. Even before the pandemic, the Food and Agriculture Organization of the United Nations reported that approximately 30

We already had high food insecurity in this country and now we are putting another layer of need on top of it. — Kevin M. Fitzpatrick

One of the many irrational characteristics of capitalism is that billions of tons of food go to waste while hundreds of millions of people struggle with hunger on a daily basis. And like all the other senseless attributes of the way the economy is currently organized, the mismatch between the enormous quantity of food that is available for human consumption but is not consumed and the vast number of people who are food insecure has been highlighted and heightened by the COVID-19 pandemic—especially in the United States.

Even before the pandemic, the Food and Agriculture Organization of the United Nations reported that approximately 30 percent of food produced for human consumption around the world is either lost (from post-harvest to distribution) or wasted (at retail and consumption levels) each year—while an estimated 821 million people (just below 11 percent of the world’s population) were undernourished (pdf).* And in the United States? According to the National Resources Defense Council (pdf), the degree of food waste was even higher—between 39 and 43 percent of the total U.S. food supply. At the same time, according to the U.S. Department of Agriculture (pdf), more than 37 million Americans (13.9 percent of households) suffered food insecurity—and less than one-third of the food that was thrown out would be enough to feed this population completely.

This senseless combination of widespread food waste and food insecurity in the United States has only worsened in recent months. On one hand, with job losses skyrocketing because of the response to the novel coronavirus pandemic, hunger is a growing issue for millions of Americans. On the other hand, farmers aren’t able to harvest and sell the food they’re growing. 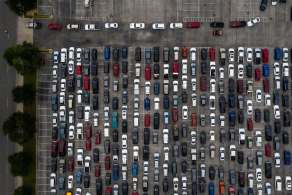 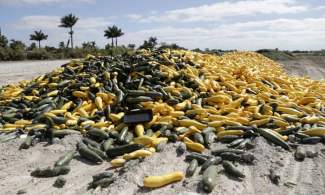 We’ve all seen the photos and read the stories: American workers and their families are lining up outside understocked food banks while animals are being culled, mountains of produce are rotting in the fields, and crops are being plowed under.

Clearly, the capitalist food system has failed. It certainly didn’t function well before the pandemic. And now its irrationality is even more evident, as it discards tons of food while more and more workers and their families go hungry.

But there are alternatives, outside of capitalism. 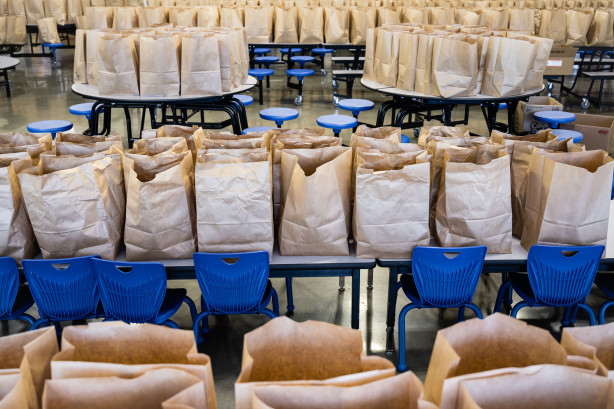 Frank Döring, cafeteria of an elementary school in Vanceburg, KY

For example, many schools are continue to prepare and making available, for pick up or delivery, free meals to needy students. But the “grab-and-go process,” without much more government assistance, becomes difficult the more remote the schools and the populations they serve are. Moreover, the free meal stations and deliveries put those who travel to work, prepare the food, and deliver it at additional risk for exposure to the coronavirus.

Food pantries and food banks are also providing free food (Feeding America estimates that demand has increased an average of 70 percent, and 40 percent of those being served are new to the system) but, across the country, they’re underfunded, understaffed, and understocked. Meanwhile, farmers are donating many tons of food but they’re finding it costly to harvest and distribute the food they can’t sell.

The Agriculture Department could step in to purchase the surplus food from farmers and deliver it to needy families. However, within the Trump administration, Secretary Sonny Perdue has been very slow to respond. As a result,

The scale of produce waste is staggering. Farmers in Florida, which provides much of the fresh produce to the eastern half of the U.S. during the winter and spring, left about 75 percent of the lettuce crop unharvested, along with significant portions of the state’s sweet corn, cabbage and squash. Up to 250 million pounds of tomatoes could end up left in the fields, according to the Florida Department of Agriculture & Consumer Services. Florida officials estimate produce growers there have taken a half a billion dollar hit. In California, the industry is projected to lose more than $1 billion per month.

A fourth possibility is for an army of volunteers to pick and pack food that is ripening in the fields. And that’s what they’re beginning to do in Florida—they’re gleaning. For example, farmer Hank Scott

invited volunteer pickers with the Society of St. Andrew, a Christian hunger relief organization, to glean as much produce as they could and donate it to nearby food banks. Anything green they left behind will likely be plowed back into the ground, feeding no one and adding to the farm’s ballooning losses. . .

As the gleaners rescue vegetable after vegetable, they are both a final lifeline for desperate families and a sign of just how badly the novel coronavirus has kneecapped the systems that are supposed to keep everyone fed.

Because of that story, I was reminded of French Avant-garde filmmaker Agnes Varda, who focused her lens on the activity of gleaning in her remarkable 2000 film, The Gleaners and I. Beginning with Jean-François Millet’s famous depiction of “The Gleaners,” Varda documents the history (dating back to a 1554 French law that allows “the poor, the wretched, the deprived” to enter the fields once the harvest is over, and take what they wish) and current forms of gleaning (collecting the odd-shaped potato, the overripe fig, or the damaged apple and “dumpster-diving” for the supermarket product whose “sell by” date has passed). She also ruminates on her own activity as a filmmaker who, during the course of making the film, gleans from and with her diverse subjects, including rural drifters, homeless alcoholics, gypsy families living in trailers, a chef who gleans because he “likes to know where his food comes from,” and young punks who live on the street. These are all people who insist on finding a use for what capitalism has determined it has no use for. 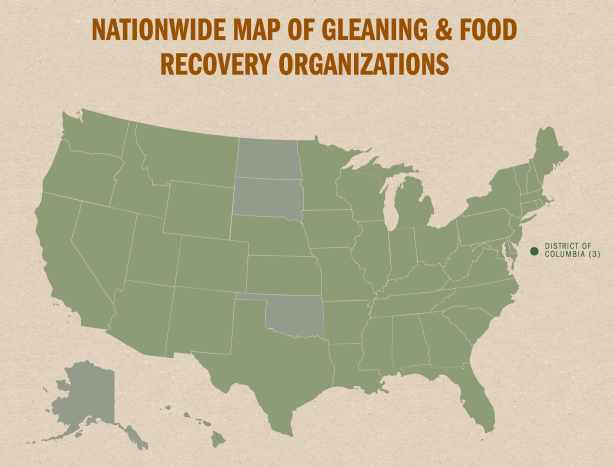 As it turns out, the Center for Agriculture and Food Systems at Vermont Law School has created the National Gleaning Project, a clearinghouse for gleaning and food recovery-related information. They have compiled information on gleaning and food-recovery organizations in 46 states plus the District of Columbia, along with a directory of relevant federal and state laws, and conducted a series of research reports. While the two terms are often conflated, and there are many different activities included under the rubric of gleaning and food recovery, the Project emphasizes

the main intent of the practice [which] is to recover surplus food for distribution to food insecure populations, meaning there is a charitable dimension to the act.

It’s that charitable dimension—the gift, if you will—that takes gleaning and other related activities (including field gleaning, wholesale produce salvage, perishable and prepared food rescue, and non-perishable food donations, collection, and recovery) beyond capitalism.** They are all ways of reducing waste and providing food to those who need it outside a system based on private property, wage-labor, and markets. In other words, gleaning and food recovery serve both to challenge the irrationality of the capitalist food system and to create a real alternative.***

And right now, in the midst of the senselessness of widespread hunger and massive amounts of food going to waste, we need more than ever to question and escape the logic of capitalism and make sure Americans get the food they need.

*Considering all people in the world affected by moderate levels of food insecurity together with those who suffer from hunger, it is estimated that over 2 billion people do not have regular access to safe, nutritious, and sufficient food, including 8 percent of the population in Northern America and Europe.

**In France, since 2015, supermarkets are required by law to be charitable—to donate all unsold but edible food to charities for immediate distribution to the poor.

***There is one glaring exception: gleaning will not solve the Jungle-like problems in American meat plants. As I see it, the only alternative is to give workers a say in how meat is processed and how their labor is organized.

I am now Professor of Economics “at large” as well as a member of the Higgins Labor Studies Program and Faculty Fellow of the Joan B. Kroc Institute for International Peace Studies. I was the editor of the journal Rethinking Marxism from 1997 to 2009. My Notre Dame page contains more information. Here is the link to my Twitter page.
My articlesMy siteMy booksAbout me
Follow on:Twitter
Previous Fixing the bailout scammers: The Ten Percent Solution
Next Evolution of economic systems