by
David F. Ruccio
My articles My siteAbout meMy booksMy videos
Follow on:Twitter
Summary:
From David Ruccio There’s been a lot of talk about oligarchs these past couple of months. Russian oligarchs, that is—the billionaires who have accumulated vast amounts of wealth, including large stakes in Russian industries, mines, and banks, as well as superyachts, private jets, investment accounts, and real estate in the West. We’ve even learned their names: Vladimir Potanin, Leonid Mikhelson, Alexey Mordashov, and so on.* They’re a pretty easy target, given Russia’s savage war on Ukraine. But what about the other oligarchs out there, why aren’t we talking about them? They also capture and keep massive amounts of the surplus produced by workers around the globe, and then accumulate even larger amounts of wealth, which they can live off of and utilize as they see fit. Why aren’t


John Quiggin writes What I’ve been doing and saying

Socialism ain’t what it used to be

There’s been a lot of talk about oligarchs these past couple of months. Russian oligarchs, that is—the billionaires who have accumulated vast amounts of wealth, including large stakes in Russian industries, mines, and banks, as well as superyachts, private jets, investment accounts, and real estate in the West. We’ve even learned their names: Vladimir Potanin, Leonid Mikhelson, Alexey Mordashov, and so on.*

They’re a pretty easy target, given Russia’s savage war on Ukraine. But what about the other oligarchs out there, why aren’t we talking about them?

They also capture and keep massive amounts of the surplus produced by workers around the globe, and then accumulate even larger amounts of wealth, which they can live off of and utilize as they see fit. Why aren’t they on our radar?

Oh, they do pop up periodically. When Telsa founder Elon Musk engages in a hostile takeover of Twitter or workers manage to organize a union in one of Jeff Bezos’s Amazon warehouses or Michael Bloomberg decides to run for president. But there’s really no sustained attention paid to them or how they have managed to become billionaires. Which is why ProPublica’s recent investigation into the finances of the wealthiest Americans is so important.

The report is the latest in a series ProPublica started in June 2021 that examines the tax records of the top 0.001-percent wealthiest Americans—400 individuals all of whom earn more than $110 million a year.** In this installment, they show that U.S. oligarchs contrive to pay taxes at a lower rate than other Americans, even very wealthy ones just below them on the economic pyramid, for two reasons: first, because much of their income is derived from investments, like stocks, which is taxed at a lower rate; and second, they are able to use large charitable donations to obtain huge deductions. Most American workers don’t own much in the way of stocks, and their gifts to charity do little to lower their taxable incomes.

So, who are these oligarchs? 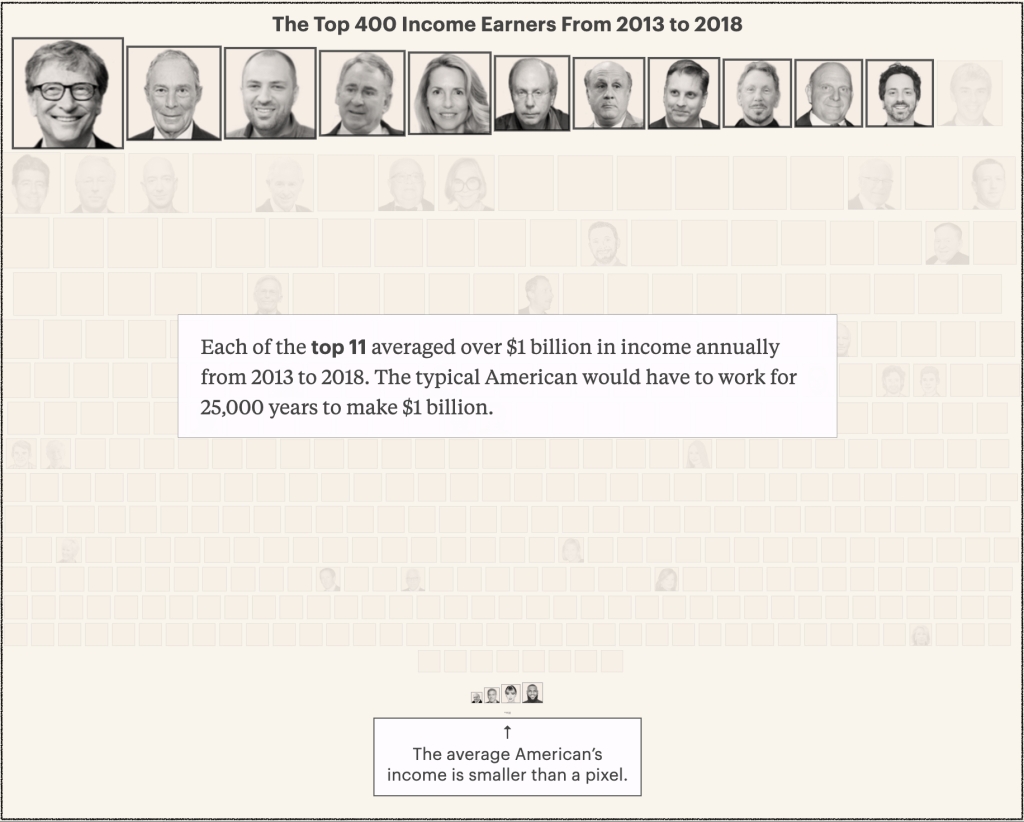 Some of them (10 of the top 15) are tech billionaires, whose incomes generally came from selling stock—including the usual suspects like Bill Gates, Jan Koum, and Larry Ellison. About one fifth of the top 400 earners are managers of hedge funds—with names perhaps less familiar for those of us outside financial circles, people like Ken Griffin, Jeffrey Yass, and David Siegel—whose income comes from trading stocks, options and other financial instruments that flows directly to them. Executives and founders of private-equity firms also stand out: people like Stephen Schwarzman, Stephen Feinberg, and George Roberts, who generally make their money by buying companies and reselling them for a profit. And then there are the heirs of large fortunes, including the eleven heirs of Walmart founders Sam and Bud Walton and four of Amway founder Richard DeVos; these inheritors of great wealth generally receive their income from dividends or other forms of investment income.

All of them, in one way or another, have figured out how to capture portions of the surplus produced by workers in the United States and around the world. They’re not necessarily capitalists (in the sense of directly appropriating the surplus through a process of exploitation)—although some of them clearly are, such as Jeff Bezos (who sits on and is the Executive Chairman of the board of directors of Amazon)—but they do occupy positions that allow them to capture distributions of the surplus produced and appropriated by others. And they did quite well in sharing in the capitalist booty: each of the top eleven averaged over $1 billion in income annually from 2013 to 2018!

Not only do these oligarchs manage to capture distributions of the surplus. As ProPublica explains, they also get to keep a higher portion than many other wealthy people. Thus, for example, the top 400 paid an average tax rate of 22 percent, while those who “only” took home $2-5 million were taxed at a higher rate, 29 percent. In other words, those in the top 400 (and their armies of accountants and financial advisers) have managed to find the “sweet spot” of high incomes and low taxes.

How do they manage to do that? One reason is because much of their income is derived from business investments, not wages or salaries, and in the United States income from financial assets (including, starting in 2003, most stock dividends) is generally taxed at a lower rate.*** Thus, the top 400 saved an average of $1.9 billion in taxes each year—due solely to the lower rate on dividends. The second reason is because U.S. oligarchs often take huge charitable deductions that reduce their income subject to tax. A particularly generous provision of the U.S. tax code allows them to deduct the full value of any stock they donate at its current price—without ever having to sell it and pay capital gains tax. According to ProPublica,

Those two factors—the amount of income taxed at the advantageous rate and the ability to muster large deductions—are the main drivers of lower tax rates for those with the highest incomes.

Now, of course, that 22-percent tax rate is still much higher than the 5-percent effective income tax rate on people who earn $40-50 thousand per year. Except. Workers actually pay more in taxes for Social Security and Medicare than income taxes. The oligarchs, meanwhile, tend to pay proportionally little of these types of taxes because wages are a tiny portion of their total incomes. Factor those payments in and the rates are almost equal: a 21-percent total tax rate for a single worker earning $45 thousand and 23 percent for those in the top 400 (by income).****

The U.S. tax system is often referred to as progressive, meaning the tax rate rises the further you go up the income ladder. As it turns out, it is anything but. The few at the top who occupy positions that allow them to receive distributions of the surplus end up paying taxes at just about the same rate as all those people at the bottom who actually work for a living.

And the result of U.S. oligarchs’ ability to capture and keep their share of the surplus? Well, the gap between them and workers at the bottom of the economic pyramid continues to grow.

As is clear from this chart, the shares of pre-tax national income captured by those in the top .001 (the red line in the chart) and bottom 50 percent (the blue line) have been steadily moving in opposite directions since 1980. And the linear trend lines show that their respective shares continue to diverge. By 2021, the oligarchs’ share had soared to 1.7 percent, while the share of all the workers in the bottom 50 percent had fallen to 13.6 percent.

And the American oligarchs’ response to criticisms of this obscene inequality? Well, at least one of them—Musk, during a fawning interview with Chris Anderson, the head of Ted—offers a simple response: “At this point, it’s water off a duck’s back.”*****

**Just to put things in perspective, a typical American worker making $40,000 a year (a dot smaller than a pixel in the chart at the top of the post) would have to work for 2,750 years to make what the lowest-earning person in this group made in just one.

*****Musk’s income tax bill in 2018 was exactly zero. He responded to ProPublica’s request for comment with a lone punctuation mark—“?’’—and did not answer any detailed follow-up questions.

I am now Professor of Economics “at large” as well as a member of the Higgins Labor Studies Program and Faculty Fellow of the Joan B. Kroc Institute for International Peace Studies. I was the editor of the journal Rethinking Marxism from 1997 to 2009. My Notre Dame page contains more information. Here is the link to my Twitter page.
My articlesMy siteAbout meMy books
Follow on:Twitter
Previous Things to consider when reading Mankiw 9th ed. Chapter 1: Ten Principles of Economics
Next Two routes to lower inflation