Home / The Angry Bear / Another Look at Drug Pricing, Costs, and Why

Another Look at Drug Pricing, Costs, and Why


run75441 writes Moms, Kids, and the Makeup of Congress

Moms, Kids, and the Makeup of Congress

Median total costs Table for the most common prescriptions of each of the 49 high-volume brand-name drugs from 2012 through 2017 as detailed in JAMA Network Open’s “Trends in Prices of Popular Brand-Name Prescription Drugs in the United States” 2019.”

A Bit of A Summary: This particular table relates back to a post I wrote; Does Trump Read JAMA Network Open? which reviewed the latest JAMA findings (Trends in Prices of Popular Brand-Name Prescription Drugs in the United States) on pharmaceutical price increases from 2012 to 2017. It is another in a series of articles which have looked at the rising prices of pharmaceuticals. The World Health Organization (2018) findings reflected on R & D costs for cancer drugs and the amount of time needed to recoup those costs (median of 3 years for $750 million) with an average return of $14. 50 for every $1 invested in R & D for cancer drugs.  For the maximum estimated risk-adjusted cost of R&D (US$2.827 BN), the time to cost recovery was 5 years (range: 2 years; 10 years, n=56).

Click on the JAMA Table: Median Total Cost of Top-Selling Brand-Name Drugs 2012 – 2917 to enlarge and again to magnify if needed. 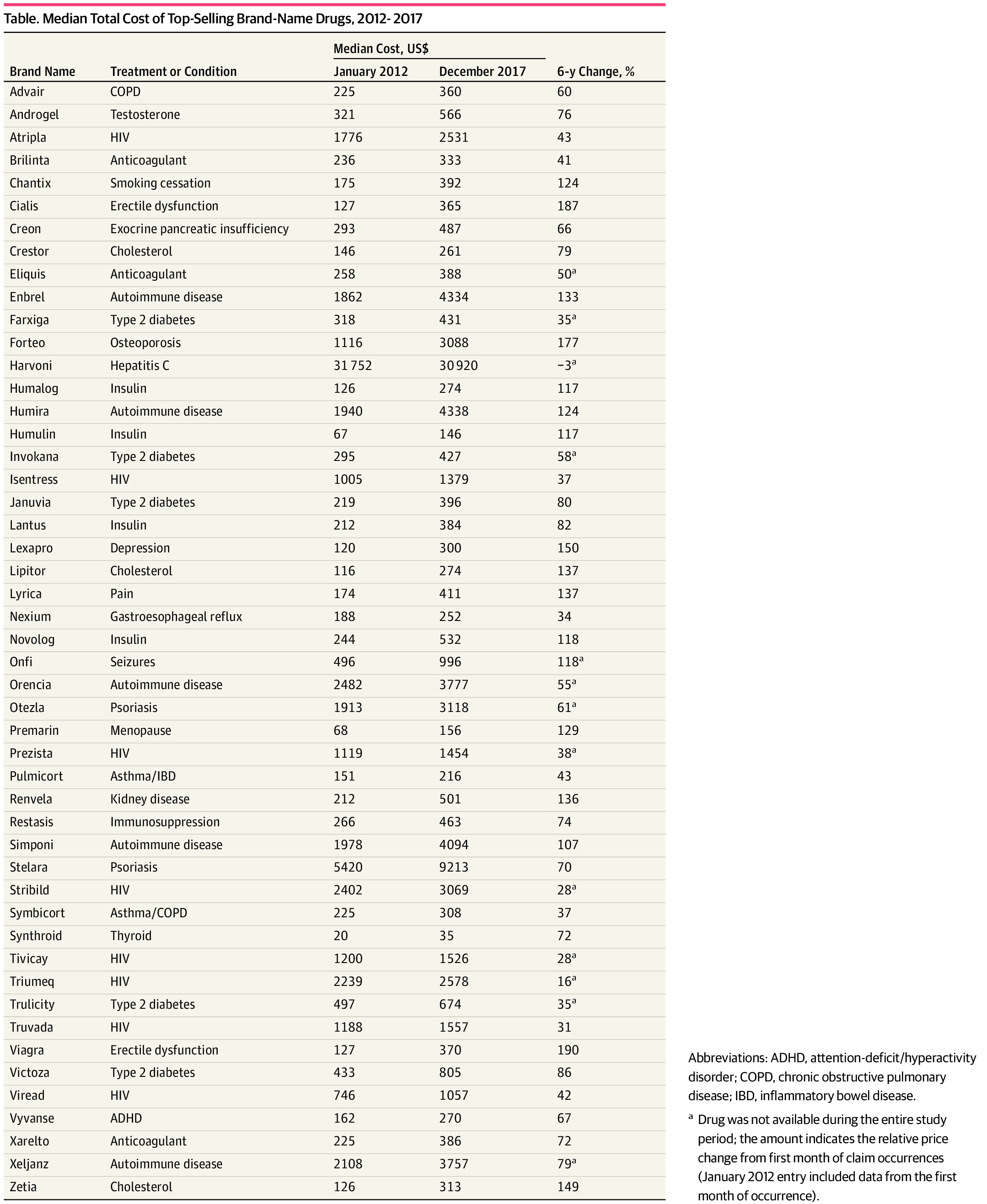 Taken “From the Trends in Prices of Popular Brand-Name Prescription Drugs in the United States” findings, substantial cost increases among these drugs was near universal, with a 76% median cost increase from January 2012 through December 2017, and almost all drugs (48 [98%]) displaying regular annual or biannual price increases. Of the 36 drugs available since 2012, 28 (78%) have seen an increase in insurer and out-of-pocket costs by more than 50%, and 16 (44%) have more than doubled in price. Insulins (ie, Novolog, Humalog, and Lantus) and tumor necrosis factor inhibitors (ie, Humira and Enbrel) demonstrated highly correlated price increases, coinciding with some of the largest increase in drug costs. Relative price changes did not differ between drugs that entered the market in the past 3 to 6 years (2012 – 2017)  and those having been on the market longer (number of drugs, 13 vs 36; median, 29% increase from January 2015 through December 2017; P = .81) nor between drugs with or without a Food and Drug Administration – approved therapeutic equivalent (number of drugs, 17 vs 32; median, 79% vs 73%; P = .21). Changes in prices paid were highly correlated with third-party estimates of changes in drug net prices (ρ = 0.55; P = 3.8 × 10−5), suggesting that the current rebate system, which incentivizes high list prices and greater reliance on rebates, increases overall costs. 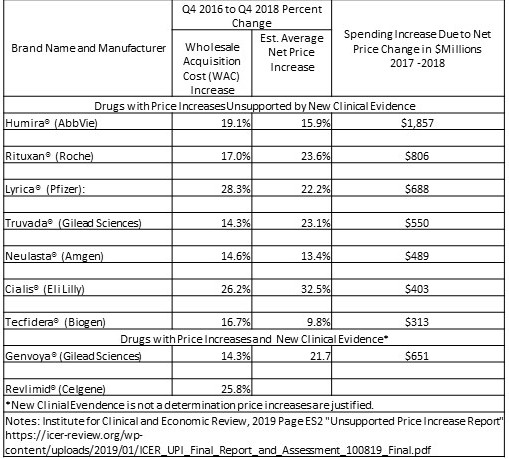 The ICER Report (Unsupported Price Increase Report) compared the percentage increases in the  Wholesale Acquisition Cost (WAC – second Column)  to the increase in the Medical Care Consumer Price Index (CPI) over the same period and excluded those drugs with a WAC increase less than 7.32% or two times the increase in Medical Care CPI over the same period. The medical care CPI is one of eight major components of the CPI recorded and reported by the US Bureau of Labor Statistics .

CPI for Medical consists of medical care services (professional services, hospital and related services, and health insurance) and medical care commodities (medical drugs, equipment, and supplies). ICER using overall Medical CPI and not a lone services or commodity related one or subcomponent(s) of either or each was to reflect increases in drug prices relative to inflation in the overall price of medical care. The 77 drugs shown in the ICER Table 2.2 had an increase in Wholesale Acquisition Cost (WAC) greater than 7.32% over  the two-year period (4th quarter 2016 – 4th quarter 2018). The remaining 23 drugs were excluded from further analysis even though they may have been greater than one times CPI.

The ICER Table 2.3 depicting 9 drugs of the 77 shows  the percentage change in net price (Column 3) over the two-year period from the fourth quarter of 2016 to the fourth quarter of 2018, and the and the increase in drug spending during calendar years 2017 and 2018 and the 4th column depicts net revenue after discounts, rebates, concessions to wholesalers and distributors, and patient assistance programs same as Table 2.2 in the report. Only the ICER Table 2.3 is shown here (JAMA chart above).

The first seven drugs under assessment did not display evidence meeting the criteria accepted evidence grading system called GRADE. As a result, the seven are reported as having price increases “unsupported by new clinical evidence.” GRADE is a method used by systematic reviewers and guideline developers to assess the quality of evidence and decide whether to recommend and intervention.  GRADE differs from other appraisal tools for three reasons: (i) because it separates quality of evidence and strength of recommendation, (ii) the quality of evidence assessed for each outcome, and (iii) observational studies can be ‘upgraded’ if they meet certain criteria.

So What Does All of This Mean?

Other reports recognize similar. Healthcare costs are increasing at a much higher rate than inflation, enough so, JAMA is reporting patented pharmaceutical price increases to be 50% to 100% between 2007 and 2014, as are the generic versions, and those introduced during 2007 and 2014 have seen similar sizeable increase. The exhibited JAMA report details the increases.

Remember, the ICER is the organization which justifies pricing for many of the new drugs coming to the market place.

The World Health Organization Report reviews the costs of R & D for Cancer Drugs which pharmaceutical companies blame as a the major factor for higher prices over the life of their patents. The WHO document reports the R & D costs are recouped in a median 3 to 5 years for R & D investments of $750 million to $2.8 Bn. Drug patents are significantly long than the recovery. Rent taking . . .

The emphasis by politicians has been on the pricing of drugs without looking at the supply chain and the PBM’s influence on it; without looking at the costs of R & D, the return from sales revenue and how quickly those costs are recovered; and without looking at the exclusivity granted drugs through patents that allow the ability to increase pricing without a returning benefit clinically, socially, to the system, and most of all to the patient. The emphasis by government should be a review of drug costs to establish a fair market value/price. I do not see a foundation being established for the setting of pricing.

While Considering Medicare For All: Policies For Making Health Care In The United States Better: Health Affairs; Kocher and Berwick; 2019

My articlesMy books
Follow on:
Previous Has Tyler Cowen or John Cochrane Ever Heard of Monopsony Power?
Next The ARAMCO IPO Stumbles Out The Door