Opioid Use since 1968 and Why It’s Abuse Increased

by
run75441
My articles My books
Follow on:
Summary:
In writing about the increase in Opioid abuse since 1980 and looking around for additional information for Robert Waldmann, I ran across this information as developed by the US Senate Joint Economic Committee. The committee is majority led by Republicans with Democrats being a part. The committee had added additional yearly data pre-1980, when the Jick and Porter letter had been written to the NEJM on the rarity of addiction from the use of Opioids, to 1968. The bar chart on the left represents the total number of deaths per year from Overdoses solely from Opioids and Overdoses from all drugs during the time period of 1968 to 2015. The bar chart on the right represents the numbers of deaths per 100,000 of population from Overdoses solely from Opioids

Bargaining power, progressive maximalism, and Medicare for All

How to roast the planet with good intentions: The Climate Equity Act

In writing about the increase in Opioid abuse since 1980 and looking around for additional information for Robert Waldmann, I ran across this information as developed by the US Senate Joint Economic Committee. The committee is majority led by Republicans with Democrats being a part. The committee had added additional yearly data pre-1980, when the Jick and Porter letter had been written to the NEJM on the rarity of addiction from the use of Opioids, to 1968. 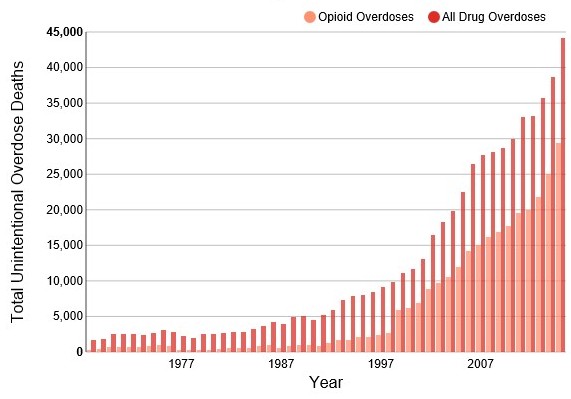 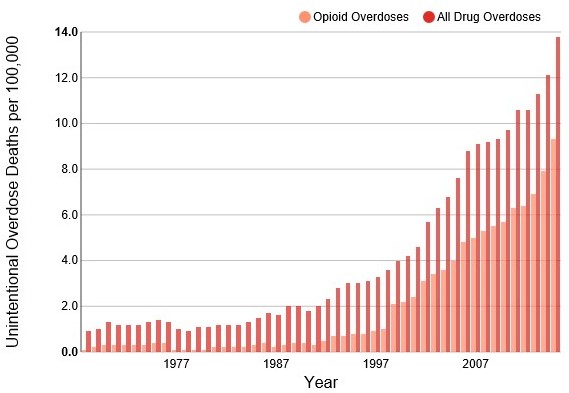 The Supporting Facts Leading to the Cause 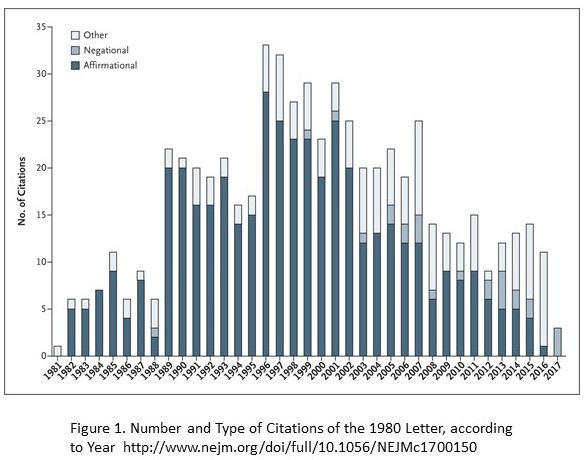 This particular bar chart details the citation of a letter sent to the NEJM in 1980 by Doctors Jane Porter and Herschel Jick about a Boston Collaborative Drug Surveillance Program at Boston University Medical Center, Waltham, MA. The verbiage of this letter can be found in the Supplemental Appendix (scroll down). The published letter detail:

“Recently, we examined our current files to determine the incidence of narcotic addiction in 39,946 hospitalized medical patients who were monitored consecutively. Although there were 11,882 patients who received at least one narcotic preparation, there were only four cases of reasonably well documented addiction in patients who had no history of addiction. The addiction was considered major in only one instance. The drugs implicated were meperidine in two patients, Percodan in one, and hydromorphone in one. We conclude that despite widespread use of narcotic drugs in hospitals, the development of addiction is rare in medical patients with no history of addiction.”

The letter says, we used Opioids in a “hospital” setting and there was no evidence of addition by patients except for one. From 1980 onward till 2015 was cited 5 to 28 (1996) times per year affirming Opioids do not cause addition. The median number of citations of a letter in the NEJM is 11 times in total. There is nothing to indicate this letter had an impact until about 1997 when the numbers and rates of death due to Opioids doubled (see charts).

2) “In Prescription Painkiller Addiction: A Gateway to Heroin Addiction,” Recall Report organization documents the start of the explosion in opioid use tying it to the introduction of OxyContin by Purdue Pharma in 1995/96. Initially introduced here: Fighting Opioid and Painkiller Addiction Angry Bear September 2018.

“An early manifestation of the opioid abuse, addiction, and overdose problem occurred largely in rural regions of Kentucky and other parts of Appalachia. OxyContin, a brand name for oxycodone, was introduced by manufacturer Purdue Pharma in 1996 and pushed hard to sell it to doctors. The company sold it as a less-addictive alternative to other painkillers because it was made in a time-release form, meaning users would get a slow onset of the drug, not a hit all at once which is more likely to lead to abuse.”

If a person wanted to abuse OxyContin, they would just grind it up and get the hit all at once.

3) In 2015, the US National Library of Medicine / American Health and Drug Benefits published the “New Perspectives in the Treatment of Opioid-Induced Respiratory Depression.”

“Overall, 44 individuals in the United States die from a prescription opioid overdose daily. In 2013 alone, an alarming 16,235 deaths were attributed to an opioid overdose, accounting for 37% of all drug-poisoning deaths in 2013 and a 4-fold increase from 1999. In addition, nearly 60% of all drug-poisoning deaths in 2013 involved prescription opioids and/or heroin. Furthermore, among individuals aged 25 to 64 years, deaths from a drug overdose—the majority of which were opioid-related—exceeded motor vehicle collisions as the leading cause of accidental death in 2013.”

5) People switched to Heroin to replace opioids as prescriptions for Opioids are reduced. The deaths from Heroin surpass the deaths by gun homicides. “OxyContin and other prescription opioids caused huge amounts of abuse, addiction, and overdoses. When doctors pulled back on prescriptions, a new epidemic began to arise. In 2015 heroin overdose deaths in the U.S. surpassed the number of deaths by gun homicide for the first time ever. In addiction treatment facilities around the country, heroin addiction is becoming the most common reason to enter treatment, surpassing even alcohol addiction.”

Robert brings forth a flawed argument made by Tom Nichols or Radio Free Tom; “‘A decaying country mired in poverty and addiction’. I am sorry you seem to have us confused with 1980, but with a positive message like this, you are a shoo-in Mike.” Robert argues back, “But Nichols really demonstrates his contempt for data and expertise by asserting that ‘poverty’ and ‘1980’ go together.” Of course Robert is correct in his facts. There is also no legitimate correlation between Opioids and poverty either. There is a lot of data to support Robert’s contention. The deaths from Opioids were less than one per 100,000 from 1968 until 1997 and from all drugs up till 1987. This can be seen in the charts at the top of the page.

The cause of the Opioid epidemic up till recently can be partially blamed on the misuse of a 1980 Jick and Porter letter to the NEJM. The letter cited the risk of addiction from the “use of Opioids in a hospital setting is rare.” Except when cited by people using this letter 608 times, 80.8% (491) of the citations to promote Opioids failed to mention the use of Opioids was in a hospital setting. Purdue Pharma, other companies, and doctors used this letter to promote the use of Opioids.

In 1996 with the introduction of OxyContin by Purdue Pharma, the use and abuse of the letter almost tripled. If we go back to the charts again, we can see that upon introduction of OxyContin in 1996 a year or so later the death rate per 100,000 doubles and continues to increase yearly. “The aggressive sales pitch led to a spike in prescriptions for OxyContin of which many were for things not requiring a strong painkiller. In 1998, an OxyContin marketing video called ‘I got My life Back,’targeted doctors. In the promotional, a doctor explains opioid painkillers such as OxyContin as being the best pain medicine available, have few if any side effects, and less than 1% of people using them become addicted.” Increases in drug poisoning deaths involving prescription Opioids increases with 37% of all drug-poisoning deaths in 2013 being attributed to Opioids a 4-fold increase from 1999.

The party began to end after Purdue Executives plead guilty in 2007 and Purdue Pharma paid an $800 million penalty. People began to switch to Heroin as the supply of Opioids diminished and prescriptions were for 7 days or less. In 1980, the country barely knew what Opioids were and the death rate from Opioids was less than 1 per 100,000. Poverty was low then also. The Opioid and Heroin crisis can be traced back to the healthcare industry, its misinformation and misuse of of drugs, and abuse of people’s trust.

My articlesMy books
Follow on:
Previous Weekly Indicators for April 1 – 5 at Seeking Alpha
Next Wage Growth

How Neoliberalism Reinvented Democracy — An Interview With Niklas Olsen