by
run75441
My articles My booksMy videos
Follow on:
Summary:
First a story, then an introduction to Alan Collinge of Student Loan Justice Org., and finally some cold hard facts from Alan about what is happening to millions of people who have student loans. Your Angry Bear blogger and activist went to a garden party in Michigan in support of Democrats and Senator Debbie Stabenow pre-2018 election. I had donated to the Democrats and directly in support of various county, state, and federal candidates. Since I had been involved with student loans for my three, had also talked and written about these loans, and been supportive of Alan Collinge of Student Loan Justice Org.; I had a question to ask. Senator Stabenow sits on the Senate Finance Committee and she supported the the 2005  S. 256 (Bankruptcy Abuse Prevention

run75441 writes A Bridge Over Troubled Water and Politics?

Megadrought coming to US west?

A Bridge Over Troubled Water and Politics? 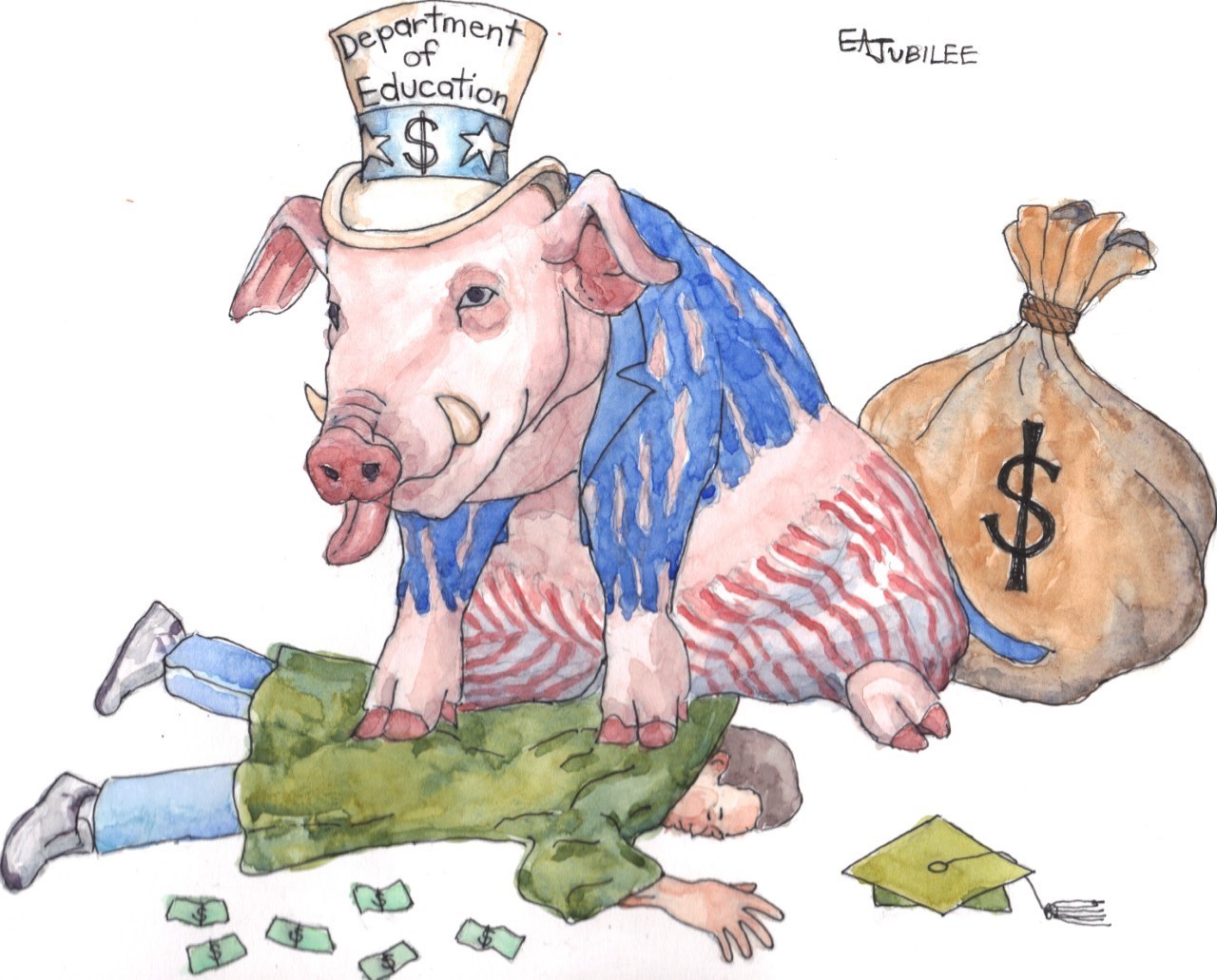 First a story, then an introduction to Alan Collinge of Student Loan Justice Org., and finally some cold hard facts from Alan about what is happening to millions of people who have student loans.

Your Angry Bear blogger and activist went to a garden party in Michigan in support of Democrats and Senator Debbie Stabenow pre-2018 election. I had donated to the Democrats and directly in support of various county, state, and federal candidates. Since I had been involved with student loans for my three, had also talked and written about these loans, and been supportive of Alan Collinge of Student Loan Justice Org.; I had a question to ask. Senator Stabenow sits on the Senate Finance Committee and she supported the the 2005  S. 256 (Bankruptcy Abuse Prevention and Consumer Protection Act of 2005 ).

“Private student loans were largely stripped of bankruptcy protections in 2005 in a congressional move that had the devastating impact of tripling such debt over a decade and locking in millions of Americans to years of grueling repayments.

The Republican-led bill tightened the bankruptcy code, unleashing a huge giveaway to lenders at the expense of indebted student borrowers. At the time it faced vociferous opposition from 25 Democrats in the US Senate.

But it passed anyway, with 18 Democratic senators breaking ranks and casting their vote in favor of the bill. Of those 18, one politician stood out as an especially enthusiastic champion of the credit companies who, as it happens, had given him hundreds of thousands of dollars in campaign contributions – ‘Joe Biden.'”

Senator Debbie Stabenow was one of the Democrats who voted “yea.” It was a beautiful day and people were there, mostly oldsters like myself and a sprinkling of of young adults. My being older plays in my favor as I am considered safe. So. when I stuck my hand up and was chosen, I asked my question. “Senator Stabenow, you and other Democratic Senators voted for the Bankruptcy Abuse Prevention and Consumer Protection Act of 2005 which took away bankruptcy rights for many students who are struggling to pay back their student loans. The total amount of debt they carry is measured in the hundreds of $millions. Many of these students will be carrying their student loan debt into retirement and may have their SS garnished. What do you intend to do to correct this situation?

What do you intend to do to correct this situation?”

Senator Stabenow: “Democrats are not in the majority in 2018”

Recently, it was said she also made a comment of younger people having to suck it up by learning fiscal responsibility due to their having issues paying loans back. Meanwhile, this contingent of up and “hopefully coming ” citizens in chained to student loans and have had their participation in the economy debt-laden by banking, financial interests, and politicians.

I have known Alan Collinge of Student Loan Justice Org. for years now having presented his words here on Angry Bear and elsewhere. On the 20th of November, Alan along with Matt Tabbi, Catherine Fitt, Thomas Borgers, and host Paul Grondahl and Michael J. Camoin will participate in a Town Hall at 3 PM (EST) to discuss the Student Loan Debt Crisis. Additionally, Alan and Film Director Michael J. Camoin are working on

There are 44 million federal student loan borrowers in the country carrying about $1.5 Trillion in federal student loan debt. According to Education Secretary Betsy DeVos last year, 75% of these people were either unable to make payments on their loans or were paying, but their balances were going up. Trump appointee Wayne Johnson, who ran the federal lending system under DeVos, said that this was closer to 80% just before covid-19 hit.  Also, we now know that the class of 2004 are defaulting on their loans 40% of the time. These borrowers, however, only borrowed a third of what today’s students are being compelled to borrow. Given this, it is no stretch to say that the default rate for more recent borrowers will surely be 70% if not higher . . . and even higher still considering this pandemic, and the uneven economic recovery that we are seeing.  It is worth noting here . . . at the peak of the mortgage meltdown crisis, the default rate of sub-prime home mortgage loans was less than 20%.

There is no easy way to say this:  We are witnessing a catastrophically failed lending system. It is done.  Toast.  Beyond saving.  Finito.   By all reasonable metrics and measures.

There are many reasons this catastrophe was allowed to form, persist, and grow to such threatening proportions- too many to list here – but suffice it to say that it was a bipartisan scheme, enabled in part by swamp “experts” claiming to be conservatives, but who were, in fact, working behind the scenes to perpetuate, rather than fix – or even end – the lending system.  Thankfully, as it is becoming increasingly clear that the lending system is in a death spiral, the disguises are

At the root of this fiasco is the stripping of nearly every consumer protection from the borrowers. Unlike all other loans in this country, it is essentially impossible to discharge student loans in bankruptcy.  Federal student loans have also been stripped of statutes of limitations, Truth in Lending laws, Fair Debt Collection Laws, and others.  The Founding Fathers were very concerned about the nation being “conquered and enslaved” by debt and called for uniform bankruptcy laws ahead of the power to raise an army and declare war in the US. Constitution.  This student loan catastrophe is certainly what they wished to avoid.

The Department of Education abandoned any pretense of serving the public decades ago, and now fights tooth and nail to perpetuate this lending system- its cash cow.  They go to great lengths behind the scenes to keep bankruptcy protections away from these loans, all the while denying loan forgiveness to 99% of the people who qualify for it, and astonishingly, making a profit, not a loss on defaulted loans- a claim no other lender can make, and a defining hallmark of a predatory lending system.

For the first 15 years of my group’s existence, we very moderately fought- to no avail- for the return of standard bankruptcy protections to these loans.  Both democrats and republicans privately agreed with us that this needed to happen, but “now” was never a good time.  So . . . the can was kicked down the road.  Year after year, decade after decade.

It is now too late to return bankruptcy protections to these loans.  At this late date, such a move would only ensure the bankruptcies of ten-million, twenty-million, maybe even more Americans.  This would overwhelm the bankruptcy courts, who typically see about a million cases per year.  Not to mention:  the federal government has no business bankrupting its citizens.  We are a better country than that.

The only reasonable solution at this point is total erasure.  In conservative parlance, take the lending system to the bath, and drown it in the tub.

It turns out that the Higher Education Act gives the Secretary of Education- and thus the President- all the executive authority needed to cancel all federally owned loans, which account for about 85% of all student loans.  This could be done without needing congressional approval, appropriation, and without adding anything to the national debt.  At a time when we are throwing trillions out in loans to businesses that don’t have to be repaid (and that add to the national debt), there is no better way to stimulate the economy.

Analysts have predicted that cancelling student loans will increase GDP by about $100 billion for the next ten years, but they do not take into account the borrowing capacity (and thus spending) that such a move would free up. This would be another $1 Trillion injected into the economy in the near and medium term.  Some even believe that debt cancellation is the only way to avoid a depression .

We started calling for this in August 2019, and in March of this year started a petition similarly.  The petition did well, and within 6 months had >amassed over a half million signatures.  Then in September, Elizabeth Warren and Chuck Schumer began to echo the call with a senate resolution calling for loan cancellation by executive order.  Today, the media is abuzz about the President’s power to cancel student loans by executive order, and beltway groups are now hopping on the bandwagon.  All indications are that Joe Biden, when seated, could cancel either $10,000 for all federal borrowers, or possibly “up to $50,000”, as Warren and Schumer put forth.

Unfortunately, the remedies being floated are wholly inadequate. A $10,000 write down is inconsequential for most borrowers.   “Up to $50,000” could mean anything, and with all the strings attached would give the unelected, unappointed leadership at the Department of Education (who have no desire or intentions of actually canceling loans) everything needed to bureaucratize the cancellation into meaninglessness, like they have done with every other loan cancellation program put before them.  After 15 years of careful observation of the lending system, I can say that what we are seeing currently is yet another political ploy by the establishment to perpetuate this unconstitutional, nationally threatening, terminal lending system a few more years, despite all the real societal harm it will cause.

The time for partial, bad-faith half-measures is long past.  Almost no one is paying on their loans right now, and if the unelected bureaucrats, lobbyists, and other student loan swamp players think that many – or maybe even any – will resume feeding this dying beast, they are dead wrong.  The people have woken up to this scam, and will eliminate it by popular rejection if necessary. The citizens hold the gold.  They make the rules. Going forward, I would say that resuming payments on one’s federal student loans- whatever their financial situation- is both unwise, and unpatriotic.

This is really more of an opportunity than a crisis.  This is the perfect time to come up with a more fair, rationally priced higher education financing system that actually helps students, rather than exploit them, and there are many good ideas out there that could be implemented rather quickly.  But that is a conversation to be had over the course of this pandemic, as the country dusts itself off, and gets back on its feet.

Both President Trump and President-Elect Joe Biden should inculcate this fact.  Over half of the 44 million affected borrowers identify as being either politically independent, or Republican, and over half never even graduated, so the media-perpetuated stereotype of student loan borrowers as liberal, Antifa protesters, is totally wrong.  These borrowers cross most all political and demographic lines, and as a voting block comprise nearly enough people to elect a President outright.

The party that actually solves this will be greatly rewarded for years, perhaps decades to come.

My articlesMy books
Follow on:
Previous Lack of inflation in September consistent with weak demand; real wages increase, but will the pandemic derail the gains?
Next Topical thread…who voted for who?