by
Cullen Roche
My articles My siteMy books
Follow on:TwitterLinkedIN
Seeking Alpha
Summary:
Fed Truthers spent much of the last 10 years screaming about hyperinflation. When that turned out to be wrong they pivoted and claimed the “inflation” was all in asset prices. That was also wildly misleading and based on the same underlying fundamental misunderstandings that led them to believe in the hyperinflation narrative. Unfortunately, now that a pandemic has hit the global economy they’re using the same set of misleading narratives to argue against any sort of Fed intervention in the economy. Most of these narratives are  unsupported by data and facts. In fact, it’s become clear that most of these narratives are really just political narratives from anti-government types who are doubling down on a decade of bad opinions. Let’s spend some time diving into the details so we can


Cullen Roche writes I Did Some Podcasts. They Were Great.

Cullen Roche writes What the Hell is the Stock Market Doing?

I Did Some Podcasts. They Were Great.

What the Hell is the Stock Market Doing?

Fed Truthers spent much of the last 10 years screaming about hyperinflation. When that turned out to be wrong they pivoted and claimed the “inflation” was all in asset prices. That was also wildly misleading and based on the same underlying fundamental misunderstandings that led them to believe in the hyperinflation narrative.

Let’s spend some time diving into the details so we can make sense of all this craziness.

What is the Fed Actually Doing?

We all know that the pandemic has now spread into the real economy in a devastating way. So the health crisis is now morphing into an economic crisis which is further exacerbating many people’s ability to handle the health crisis. The government is stepping in to support people financially so they can better support their health needs.

The Fed’s new programs mostly amount to large lines of credit for a broad swath of the economy. In essence, Congress dropped the ball and put together a rescue package that was way too small and far too slow to help people. So the Fed is trying to hold things together as best they can with the limited tools they have.

That said, there’s room for criticism here. It’s not all good in my opinion. For instance, I don’t see how buying secondary market ETFs does much of anything since this doesn’t fund companies directly. But on the whole the programs mostly amount to inexpensive temporary loans to investment grade firms.

Why Doesn’t the Government Let the Cards Fall?

In 2008 I sang a very different tune. I wanted the banks to get crammed down and equity wiped out. I was a loud critic of QE for years. This is completely different. This is a humanitarian crisis, not the result of an irresponsible asset boom.  Let’s use an example to communicate the point.

Let’s say your neighbor builds a great big over-priced home that booms in value during the economic expansion. And then let’s say a completely exogenous shock hits the neighborhood and his house catches fire. We can use public funds to have the fire department put out the fire. This will indirectly support his home value. Should we not put out the fire because it will support the home value?

The same basic thing is happening here. The Fed is putting out some fires to help alleviate the side effects of a natural disaster. That support is helping asset prices in some cases. I don’t know why we’d let the houses burn when they did nothing to cause the fire in the first place.

We should be really clear – no one knows whether there was a “bubble” in anything before this. But what we all definitely know is that the current pain on Main Street isn’t the result of asset prices falling due to some Fed manipulated market bubble that is re-pricing. Main Street’s pain is a humanitarian crisis. It is the result of a virus that is hurting people who did nothing reckless during the economic expansion. So, even if you think there was an asset bubble it is a moot point. You don’t tell the Fire Department not to put out your neighbor’s house fire just because their home got inflated during an asset boom.

Isn’t This Another Corporate Bailout?

The Fed doesn’t have the authority to send people checks. They’re just a really big bank and they operate through the banking system. So, when they want to enact policy they always end up doing it through banks. To some people this will always look like a bank and corporate bailout. But the truth is that the Fed is simply trying to achieve their mandate of full employment. Yes, the Fed is a very indirect system through which to help Main Street, but these programs do help Main Street by helping support the firms that employ Main Street.

I understand the angst that the Fed is operating massive and disproportionately large programs vs Congress. This means that corporations are getting the majority of the bailout while Main Street gets far less. Yeah, this is frustrating. But that’s not the Fed’s fault. This is Congress’s fault.

Why Are We Bailing Out Firms Who Borrowed During the Boom and Bought Back Stock?

These narratives are pretty misleading and largely hindsight bias. Corporate America as a whole had a pretty average size cash buffer heading into 2020 (see chart below).

Further, it’s a little hard to criticize firms for not having enough cash in case the entire economy grinds to a complete halt. You just don’t expect that to happen. I can also recall countless articles over the last 10 years by people arguing that corporate America was the cause of slow growth and low wages because they weren’t investing enough and raising wages. But then a recession occurs, hindsight bias kicks in and we all reverse course and say “gosh, they should have held more cash”.

In any case, I’m not sure it’s fair to have a meteor hit the US economy and say “Why didn’t everyone hold an emergency meteor fund?” 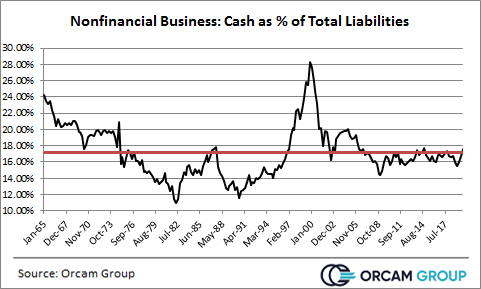 What About All Those Nefarious Buybacks?

Honestly, 95% of the buyback criticisms are misunderstandings of corporate finance. The most common lazy generalization is that firms borrow to buyback stock so they can “manipulate” their share prices higher and enrich executives. This might be true in some cases, but the truth is that corporate equity is the very most expensive thing on the liability side of a firm’s balance sheet. If you believe that firms should be more prudent then you should be a strong advocate of buybacks.

Firms can raise capital by issuing debt or equity. While most people tend to think debt is expensive (because they’re personally familiar with it) the reality is that equity is MUCH more expensive to issue. Having outside investors is incredibly expensive to the firm as a whole. You not only cede a share of growth to outside investors, but you’re constantly paying everyone dividends. Retiring stock is a very prudent move in the long-term, even more prudent in many cases than paying down debt. But narratives tend to trump reality and the buyback narrative is constantly misconstrued around political narratives and misunderstandings.

Look. I get it. This is another case where it looks like Corporate America is getting supported while Main Street gets far less. I wish Congress was doing more. I said that months ago. But I also think we need to be a little more forgiving here. The vast majority of the people being hurt here did nothing wrong. And if the Fed can even indirectly help those people then that’s the right type of response to a humanitarian crisis of the likes we’ve never seen.