by
Lars Pålsson Syll
My articles My siteAbout meMy booksMy videos
Follow on:Twitter
Summary:
Behavioural economics and complexity economics What is to take the place of neoclassical economics and its neoliberal policy offshoot? There is no shortage of candidates, grouped under the broad banner of economic heterodoxy. Some of these successor doctrines – behavioral economics and complexity economics are examples of note – take the neoclassical orthodoxies as a point of departure. They therefore continue to define themselves in relation to those orthodoxies. Others avoided the gravitational pull altogether – or, as in the exceptional case of Keynes, made a “long struggle to escape”. The behaviorists depart from neoclassicism by giving up strict assumptions of rational and maximizing behavior. Complexity theorists explore the dynamics of interacting

How to achieve exchangeability (student stuff)

What is to take the place of neoclassical economics and its neoliberal policy offshoot? There is no shortage of candidates, grouped under the broad banner of economic heterodoxy. Some of these successor doctrines – behavioral economics and complexity economics are examples of note – take the neoclassical orthodoxies as a point of departure. They therefore continue to define themselves in relation to those orthodoxies. Others avoided the gravitational pull altogether – or, as in the exceptional case of Keynes, made a “long struggle to escape”. The behaviorists depart from neoclassicism by giving up strict assumptions of rational and maximizing behavior. Complexity theorists explore the dynamics of interacting agents and recursive functions. Both achieve a measure of academic reputability by remaining in close dialog with the orthodox mainstream. Neither pays more than a glancing tribute to earlier generations or other canons of economic thought. The model is that of neoclassical offshoots – New Institutionalism, New Classical Economics, New Keynesianism – that make a vampire practice of colonizing older words and draining them of their previous meaning. The dilemma of these offshoots lies in having accepted the false premise of the orthodoxy to which it proposes to serve as the alternative. The conceit is of a dispassionate search for timeless truth, once again pursued by “relaxing restrictive assumptions” in the interest of “greater realism”. Thus, for example, in complexity theories agents follow simple rules and end up generating intricate and unpredictable patterns, nonlinear recursive functions give the same result, the variance of returns turns out to be non-normal, and so forth. But once the starting point is taken to be the neoclassical competitive general equilibrium model, these exercises are largely drained of insight and relevance. The behaviorists can tell us that real people do not appear to fit well into the portrait of autonomous, selfish, commodity-obsessed pleasure-seekers that is “economic man”. The complexity theorists can tell us, as Arthur (2021) does, is that a system constructed from confections of interacting agents may be unstable. These things, even the dimmest observer of real-existing capitalism already knew.

Although discounting empirical evidence cannot be the right way to solve economic issues, there are still, in my opinion, a couple of weighty reasons why we — just as Galbraith — perhaps shouldn’t be too excited about the so-called ’empirical’ or ‘behavioural’ revolution in economics. 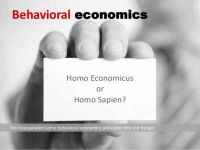 Behavioural experiments and laboratory research face the same basic problem as theoretical models — they are built on often rather artificial conditions and have difficulties with the ‘trade-off’ between internal and external validity. The more artificial conditions, the more internal validity, but also less external validity. The more we rig experiments to avoid the ‘confounding factors’, the less the conditions are reminiscent of the real ‘target system.’ The nodal issue is how economists using different isolation strategies in different ‘nomological machines’ attempt to learn about causal relationships. One may have justified doubts on the generalizability of this research strategy since the probability is high that causal mechanisms are different in different contexts and that lack of homogeneity and invariance doesn’t give us warranted export licenses to the ‘real’ societies or economies.

If we see experiments or laboratory research as theory tests or models that ultimately aspire to say something about the real ‘target system,’ then the problem of external validity is central (and was for a long time also a key reason why behavioural economists had trouble getting their research results published).

A standard procedure in behavioural economics — think of e.g. dictator or ultimatum games — is to set up a situation where one induce people to act according to the standard microeconomic — homo oeconomicus — benchmark model. In most cases, the results show that people do not behave as one would have predicted from the benchmark model, in spite of the setup almost invariably being ‘loaded’ for that purpose. [And in those cases where the result is consistent with the benchmark model, one, of course, have to remember that this in no way proves the benchmark model to be right or ‘true,’ since there, as a rule, may be many outcomes that are consistent with that model.]

For most heterodox economists this is just one more reason for giving up on the standard model. But not so for mainstreamers and many behaviouralists. To them, the empirical results are not reasons for giving up on their preferred hardcore axioms. So they set out to ‘save’ or ‘repair’ their model and try to ‘integrate’ the empirical results into mainstream economics. Instead of accepting that the homo oeconomicus model has zero explanatory real-world value, one puts lipstick on the pig and hope to go on with business as usual. Why we should keep on using that model as a benchmark when everyone knows it is false is something we are never told. Instead of using behavioural economics and its results as building blocks for a progressive alternative research program, the ‘save and repair’ strategy immunizes a hopelessly false and irrelevant model.

By this, I do not mean to say that empirical methods per se are so problematic that they can never be used. On the contrary, I am basically — though not without reservations — in favour of the increased use of behavioural experiments and laboratory research within economics. Not least as an alternative to completely barren ‘bridge-less’ axiomatic-deductive theory models. My criticism is more about aspiration levels and what we believe that we can achieve with our mediational epistemological tools and methods in the social sciences.

The increasing use of natural and quasi-natural experiments in economics during the last couple of decades has led several prominent economists to triumphantly declare it as a major step on a recent path toward empirics, where instead of being a deductive philosophy, economics is now increasingly becoming an inductive science.

Limiting model assumptions in economic science always have to be closely examined since if we are going to be able to show that the mechanisms or causes that we isolate and handle in our models are stable in the sense that they do not change when we ‘export’ them to our ‘target systems,’ we have to be able to show that they do not only hold under ceteris paribus conditions and a fortiori only are of limited value to our understanding, explanations or predictions of real economic systems.

‘Ideally controlled experiments’ tell us with certainty what causes what effects — but only given the right ‘closures.’ Making appropriate extrapolations from (ideal, accidental, natural or quasi) experiments to different settings, populations or target systems, is not easy. ‘It works there’ is no evidence for ‘it will work here.’ Causes deduced in an experimental setting still have to show that they come with an export-warrant to the target system. The causal background assumptions made have to be justified, and without licenses to export, the value of ‘rigorous’ and ‘precise’ methods is despairingly small.

Taking assumptions like utility maximization or market equilibrium as a matter of course leads to the ‘standing presumption in economics that, if an empirical statement is deduced from standard assumptions then that statement is ‘reliable’ …

The ongoing importance of these assumptions is especially evident in those areas of economic research, where empirical results are challenging standard views on economic behaviour like experimental economics or behavioural finance … From the perspective of Model-Platonism, these research-areas are still framed by the ‘superior insights’ associated with early 20th century concepts, essentially because almost all of their results are framed in terms of rational individuals, who engage in optimizing behaviour and, thereby, attain equilibrium …

While the mere emergence of research areas like experimental economics is sometimes deemed a clear sign for the advent of a new era … a closer look at these fields allows us to illustrate the enduring relevance of the Model-Platonism-topos and, thereby, shows the pervasion of these fields with a traditional neoclassical style of thought.

So — although it is good that behavioural economists are rewarded ‘Nobel prizes’ and that much of their research has vastly undermined the lure of axiomatic-deductive mainstream economics, there is still a long way to go before economics has become a truly empirical science. The great challenge for future economics is not to develop methodologies and theories for well-controlled laboratories, but to develop relevant methodologies and theories for the messy world in which we happen to live.

An economic theory that does not go beyond proving theorems and conditional ‘if-then’ statements — and do not make assertions and put forward hypotheses about real-world individuals and institutions — is of little consequence for anyone wanting to use theories to better understand, explain or predict real-world phenomena.

Building theories and models on patently ridiculous assumptions we know people never conform to, does not deliver real science. Real and reasonable people have no reason to believe in ‘as-if’ models of ‘rational’ robot-imitations acting and deciding in a Walt Disney-world characterised by ‘common knowledge,’ ‘full information,’ ‘rational expectations,’ zero transaction costs, given stochastic probability distributions, risk-reduced genuine uncertainty, and other laughable nonsense assumptions of the same ilk. Science fiction is not science.

For decades now, economics students have been complaining about the way economics is taught. Their complaints are justified. Force-feeding young and open-minded people with unverified and useless autistic mainstream theories and models cannot be the right way to develop a relevant and realist economic science.

Much work done in mainstream theoretical economics is devoid of any explanatory interest. And not only that. Seen from a strictly scientific point of view, it has no value at all. It is a waste of time. And as so many have been experiencing in modern times of austerity policies and market fundamentalism — a very harmful waste of time.

An alternative to mainstream orthodoxy that has been discussed much lately is so the called complexity economics and its agent-based modelling.

As a critique of mainstream economics, yours truly fully appreciates the work done by the ‘complexity’ economists. But although their alternative agent-based models in many ways are superior to the more traditional mainstream ‘Walt Disney’ kind of models, I am not convinced that their unquestioned attachment to mathematical-formalist modelling is the right way to move forward in making economics a more realist and relevant science.

Professor at Malmö University. Primary research interest - the philosophy, history and methodology of economics.
My articlesMy siteAbout meMy books
Follow on:Twitter
Previous How to do philosophy
Next Sapere aude!

Learning to re-envisage the economy (Part 1)