The Unreal Basis of Neoclassical Economics

by
Steve Keen
My articles My siteAbout meMy booksMy videos
Follow on:TwitterLinkedIN
Summary:
By Al Campbell, Ann Davis, David Fields, Paddy Quick, Jared Ragusett and Geoffrey Schneideroriginally posted hereIntroduction Ten years after the financial crisis, we still find mainstream economists engaging in overly simplistic analysis that does not accurately capture the dynamics of the real world. People studying economics need to know that the principles of mainstream economics are hopelessly unrealistic. In this short article, we demonstrate that the ten principles of economics in Gregory Mankiw’s best-selling textbook are divorced from reality and reflect an extreme and unwarranted bias towards unregulated markets.[ii] Mankiw’s “Ten Principles of Economics” should more accurately be titled “Ten Principles of Unrealistic Neoclassical Theory.”Mankiw’s Principle #1:

Matias Vernengo writes Gatekeepers and herd behavior: On Tooze and the radicalization of Krugman

Matias Vernengo writes Life among the Econ: fifty years on

On the origins of Sraffa’s equations 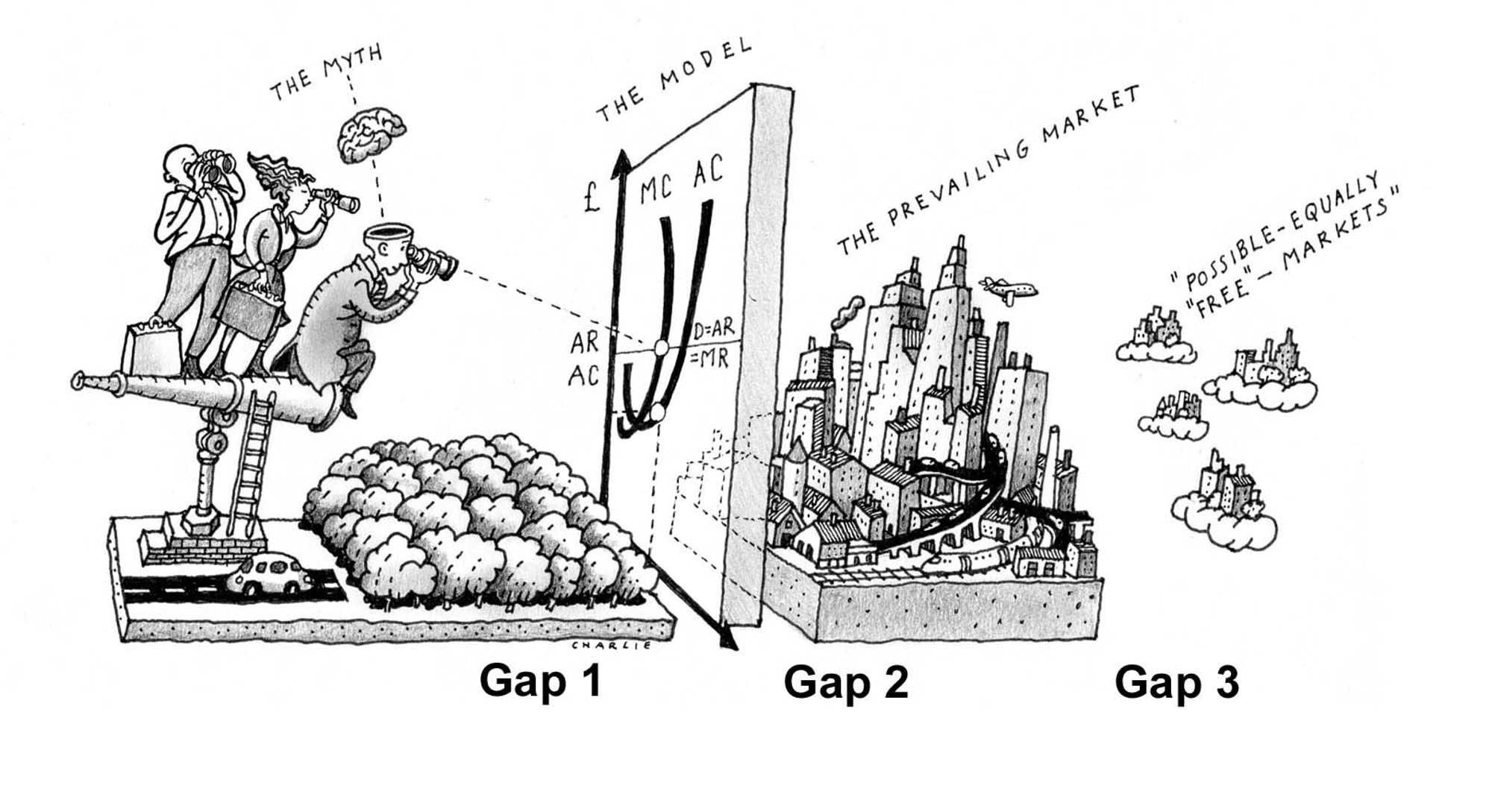 Introduction
Ten years after the financial crisis, we still find mainstream economists engaging in overly simplistic analysis that does not accurately capture the dynamics of the real world. People studying economics need to know that the principles of mainstream economics are hopelessly unrealistic. In this short article, we demonstrate that the ten principles of economics in Gregory Mankiw’s best-selling textbook are divorced from reality and reflect an extreme and unwarranted bias towards unregulated markets.[ii] Mankiw’s “Ten Principles of Economics” should more accurately be titled “Ten Principles of Unrealistic Neoclassical Theory.”

Mankiw’s Principle #1:  People Face Tradeoffs/There is no such thing as a free lunch.
Mankiw ignores the historical determination of the distribution of resources and the crucial distinction between those whose income comes almost entirely from the performance of labor and those whose income comes from their ownership of capital. As a result he is unable to recognize the political power that results from the concentration of wealth in the capitalist class, and to analyze the distributional impact of decisions in which those who gain are often significantly different from those who lose. In addition, history is full of accounts of forcible appropriation of resources that appeared to be “free” to those who acquired them.

Mankiw’s Principle #2:  The Cost of Something Is What You Give Up to Get It/Opportunity Cost
Insofar as individuals are able to make decisions, their choices can be described as “giving up” one opportunity in order to take up another. This tells us nothing about the determination of the choices that are available to them. The “choice” of a worker as to whether to take on a dangerous job or face eviction from a home requires a very different analysis than one suitable for a discussion of the choice between apples and oranges. On a different level, an analysis of the “trade-off” between income now and increased income in the future requires an understanding of ecological limits to the growth of material production.

Mankiw’s Principle #3:  Rational People Think at the Margin.
Neither consumers nor producers, nor humans in many other social roles, generally act on the margin. The assertion of marginal analysis that decisions must be such as to equate marginal benefit with marginal cost is simply a restatement of the first derivative condition resulting from maximization subject to a constraint, rather than a reflection of real human choice. Mainstream theory then defines behavior according to this mathematical construction even though it does not govern actual choice in the real world. But more important is the presumption that all decision-making is guided by the well-being of isolated individuals, and thus that “rationality” consists of behavior that maximizes the benefit of the individual decision–maker. This dismisses the fact that people are social animals whose decision-making recognizes the interaction between individuals, and it ignores how in the real world people make decisions considering their whole situation under possible alternatives, material restraints, imperfect information, their cognitive abilities, the existing power structures, and culture.

Mankiw’s Principle #4:  People Respond to Incentives.
This is tautological. Furthermore, models based on monetary incentives by selfish, isolated individuals and firms in perfectly competitive markets are unrealistic and ignore crucial real world issues. Monetary incentives are not all that matters. In the real world people make many decisions on the basis of their evaluation of the resulting well-being of many people beyond themselves, or on social and cultural norms.

Mankiw’s Principle #5:  Trade Can Make Everyone Better Off.
Trade can increase total production, but trade has distributional impacts, with winners and losers. Trade in modern capitalism tends to foster inequality while undermining wages and working conditions for many laborers. This principle promotes unregulated trade, but unregulated trade has not proven to be the best route to economic development, nor is it good for all people. In the real world, infant industries, immiserating growth, terms of trade shocks, and increasing inequality render this principle useless as a policy guide.

Mankiw’s Principle #6:  Markets Are Usually a Good Way to Organize Economic Activity.
As there are no measurable units by which one can classify all specific economic activities in the real world as “good” or not, principle #6 is nothing more than a neoclassical ideological declaration of faith. Markets are human creations that operate differently in various economic systems, and the various existing and potential economic systems themselves are human creations. The first real question then is if under an existing system private capitalist markets driven by the profit motive do better than possible alternative human creations for providing the good or service, potentially driven directly by the desire to meet specific human needs. Important examples providing evidence of the inferior performance (efficiency and effectivity) of private capitalist market-driven systems are well run social security systems and single-payer health care systems. Avoiding the error of accepting the system as given, a deeper question would be if under some different economic system, which was not built to favor capitalist accumulation, alternatives could outperform profit-driven markets operating in capitalist systems.

Mankiw’s Principle #7:  Governments Can Sometimes Improve Market Outcomes.
Behind this assertion is the idea that markets are natural and could run without any government intervention, and that such natural markets tend to be efficient but sometimes are not quite optimal. In those cases the efficiency of markets could be improved by government tweaks. To the contrary, in the real world all markets are created by governments, which both establish the rules of the game and enforce them, and thereby determine market outcomes. If the government passes laws requiring that food be safe, that changes the market for food, and yields different market outcomes than if those laws did not exist. With this understanding, principle #7 is reduced to the not very profound statement that because governments create markets, they have the ability to create them with better or worse outcomes. Further, the issue always ignored by neoclassical economics of social divisions is particularly important for considering “better market outcomes”: better for whom? Market rules are shaped by power structures to benefit some classes and other social groups more favorably than others (for example capitalists at the expense of workers, First World countries at the expense of Third World countries, etc.).

Mankiw’s Principle #8:  A Country’s Standard of Living Depends on Its Ability to Produce Goods and Services.
Higher GDP per capita does not necessarily result in a higher material standard of living for all people within, as well as between, countries. Furthermore, neoclassical economics operates with a definition of “standard of living” as the amount of goods and services consumed, so this principle reduces to the not quite tautological, but not very insightful, claim that the amount of goods and services consumed in a country depends on its ability to produce them. In the real world what people are concerned with is their quality of life, which includes social respect, power to act on one’s desires, conditions of work (and not just pay), social relations, and much more. Neoclassical economics does not address the extension of principle #8 to what people in the real world are actually concerned with, their quality of life, for which the goods and services produced are just one among many determinants.

Mankiw’s Principle #9:  Prices Rise When the Government Prints Too Much Money.
Since the neoclassical definition of “too much money” is the amount that makes prices rise, this is a tautology. In the real world the relationship between prices and the money supply is complex: expanding money might cause a jump in prices or it might cause no price increases at all, depending on many other things in the economy.  The applied policy transformation of this into the incorrect claim that “prices rise when the government prints more money” is an ideological artifice, used today to justify austerity policies and keeping wages low.

Mankiw’s Principle #10:  Society Faces a Short-Run Tradeoff between Inflation & Unemployment.
The relationship between inflation and unemployment is complex and does not follow a systematic pattern. By the 1970s data from the real world had caused textbooks to go from Phillips Curves to Shifting Phillips Curves to abandoning them entirely. In view of that experience, principle #10 of a short-term trade-off between inflation and unemployment has become a neoclassical ideological justification for challenging those who advocate policies that would reduce the rate of unemployment, by fostering fears of inflation that may never materialize.
In conclusion, Mankiw’s so-called “Ten Principles of Economics” ignore crucial realities of the economic world. In particular, Mankiw excludes power imbalances, inequality, social forces, development experiences, the realities of market behaviors, laws and outcomes, realistic measures of quality of life, and recent macroeconomic data from his principles. It is hard to imagine a less useful set of ideas to guide modern societies in designing a good economic system. Unfortunately, almost all other mainstream principles of economics textbooks parrot these same principles. Students of economics will have to look elsewhere for useful analysis of the economy and how to build a democratic economy and society that works for all.

End-notes
[i] In a subsequent article, we will offer a set of principles of radical political economy to provide a more realistic, alternative approach.
[ii] The authors are members of the steering committee of the Union for Radical Political Economics (URPE). The ideas presented in this article are those of the authors and not of URPE. The purpose of this article is to make readers aware that there are alternatives to the principles of economics put forth by mainstream economists. We synthesize the critiques of mainstream economics by radical political economists in order to give students and teachers ammunition to confront the unrealistic paradigm of neoclassical economics that currently dominates the profession.

Is money — really — neutral in the long run?