World War II, not the New Deal, is the model for COVID-19 macroeconomic policies

by
Matias Vernengo
My articles My siteMy booksMy videos
Follow on:TwitterLinkedIN
Summary:
Central planning (Socialism?) in democratic societies There is a lot being written on the causes and cures for the economic consequences of the Coronavirus (COVID-19). The predictable distinction is among those that think that this is essentially a demand shock, mostly to services, and those that are concerned with the disruption to supply chains. And to some extent both are correct. But that is not the more relevant problem here, which is whether we need just more government or a change in the nature of the governmental interventions.Neil Irwin, from the New York Times, provides a suitable and simple explanation of the demand shock story. Note that a demand shock often goes together with significant financial implications, as agents with reduced revenue tend to default on loans or 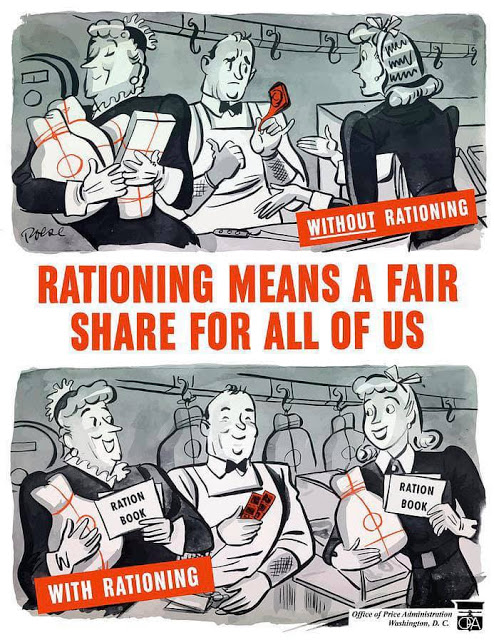 There is a lot being written on the causes and cures for the economic consequences of the Coronavirus (COVID-19). The predictable distinction is among those that think that this is essentially a demand shock, mostly to services, and those that are concerned with the disruption to supply chains. And to some extent both are correct. But that is not the more relevant problem here, which is whether we need just more government or a change in the nature of the governmental interventions.

Neil Irwin, from the New York Times, provides a suitable and simple explanation of the demand shock story. Note that a demand shock often goes together with significant financial implications, as agents with reduced revenue tend to default on loans or payment streams to any liabilities. The Economist noted the risk associated with excessive corporate debt, and the possibility that the virus might trigger a debt-deflation type crisis in financial markets. On the fragility of corporate balance sheets see also this insightful piece by Michalis Nikiforos. Many economists have talked in favor of this interpretation, and certainly there is a lot to be said about this view, which I tend to agree with, by the way.

The fiscal expansion plans put forward by the administration have been mostly seen through the lens of a regular demand shock version of the recession. They include things like a bailout of certain sectors hit hard by the sudden decline in demand, like the airlines, and checks to those that have lost their jobs, besides the Fed injecting liquidity to reduce the financial effects of the demand shock. In that sense, not very different from the fiscal package and financial rescue of the 2008 crisis.

Of course, macroeconomic policies in 2008, even though they did preclude a fall in unemployment of the magnitude that had occurred in the 1930s during the Great Depression, were flawed in many ways. They did rescue banks, but left many to loose their houses for one (and Obama's Justice Department did not prosecute in any significant way the many financial excesses of Wall St); it was also probably on the smaller side, leading to a prolonged, but very slow, recovery, in which labor market conditions remained relatively poor for many workers, even with low levels of unemployment by the end. All things that increased the problems at the bottom of the income distribution and helped explain Trump's political victory in 2016. Hence, there is reasonable fear that these policies might not work well this time around again. Besides, there is a case to be made that this crisis is not fundamentally a demand shock.

A prominent defender of the latter is Dean Baker. He says: "Our problem is not creating demand in the economy, the problem is keeping people more or less whole for a possibly extended period in which much of the economy is shut down." And as he notes, sending checks to people directly will fall short of a solution. Checks will be irrelevant for many, that have secure jobs, and insufficient for many, since it will be too little, or because some people might be directly excluded from such programs, like undocumented immigrants with US born children. Dean's alternative is to send money directly to companies that would keep workers employed and inactive, helping in the recovery too. Of course this solution deals fundamentally with those in the labor market, and not with those in more precarious situations.

I see the problem as being essentially a demand shock, note that the increase in unemployment insurance applications was marked last week, to a great extent associated to Coronavirus layoffs. Obviously nobody would deny the supply side effects of the crisis, even though these are less disruptive in the short run, in my view. Nobody is being laid off because the company is unable to obtain intermediary goods for production, or at least not on significant numbers. It is the sudden collapse of demand that matters. But that misses the point of the kind of demand and supply shocks that have hit the economy. These are localized, uneven shocks and an efficient policy reaction requires targeted interventions. The kind of intervention we need is one that one the demand side tries to maintain the ability of families with cash flows problems (the ones laid off and those that were already outside the formal job market), and on the supply side that redirects production to the sectors that would experiment a surge in demand.

The most typical analogy in times of macroeconomic crises is the Great Depression, and progressives, not incorrectly go searching for ideas in the New Deal tool box. However, the New Deal was mostly about regulation, in its first phase, and about spending, in particular after the Roosevelt Recession. The kind of intervention we need is more akin to World War II, one in which government agencies have ample powers to requisite, produce or fund private corporations to produce what is needed as vital effort for survival, as alluded by Jamie Galbraith in his recent piece on the virus. For example, we need to reconvert the economy to produce more ventilators, which are in short supply, and also to ration the ability of families to hoard certain key central consumer goods, to preclude localized scarcity of essential items like hand sanitizer. We need planning, not just more government spending. And, yes, that means Socialism (or Social Democracy). This was something that no US citizen would have been surprised about, in particular after the incredible collapse of the market economy in the early 1930s, and it should not be a surprise that Socialism is somewhat more popular now. COVID-19 makes it clear why markets cannot cope with global crisis like a pandemic.

Another central element of the World War II effort was the generous and strategic concern with the global impact of US policies. Lend-lease, even before the US entry in the war, was central for allowing the UK resist the Nazi onslaught, and the subsequent program with the Soviet Union was crucial for them to be able to resist, and eventually win the war in the European front. In order to defeat Nazism, the US authorities were willing to cooperate with a Communist government, and provide significant resources. A similar approach should be used to deal with nations that are not seen as allied (like the Soviets then), but that in a particular context should be helped, like Iran, and Venezuela, which are and will be under extreme duress during the pandemic. The negative effects on the US image associated to the tightening of the sanctions, and the impediments to IMF loans under these circumstances, will be hard to reverse.

Finally, some think that this would be a short lived V-shaped recession. Meaning that once the main social distancing policies are lifted, the economy will recover swiftly. Note, however, that the duration of the measures is contingent on its own success. The more successful we are at flattening the curve, meaning reducing the contagion rate, to avoid overwhelming the health system, the longer the economic disruption will be, and the more we would need a planned economy.
Dean Baker Demand vs Supply Shocks Galbraith New Deal Nikiforos Planning socialism World War II 2020-03-21
Matias Vernengo
Full story here
Are you the author?
0 0

Econ Prof at @BucknellU Co-editor of ROKE & Co-Editor in Chief of the New Palgrave Dictionary of Economics
My articlesMy siteMy books
Follow on:TwitterLinkedIN
Previous From Truncated Developmental State to Failed State in Latin America
Next New issue of ROKE is out