by
David F. Ruccio
My articles My siteMy booksAbout me
Follow on:Twitter
Summary:
From David Ruccio There is a specter haunting capitalist development around the globe. In fact, the latest Human Development Report begins by naming that menacing apparition: The wave of demonstrations sweeping across countries is a clear sign that, for all our progress, something in our globalized society is not working. Different triggers are bringing people onto the streets: the cost of a train ticket, the price of petrol, political demands for independence. A connecting thread, though, is deep and rising frustration with inequalities. If anything, that’s an understatement. It’s not just “something” that is wrong; contemporary capitalism as a whole is not working, except for a tiny—but quite powerful—group at the top. The rest of us are being subjected to what can only be called

A stock market boom is not the basis of shared prosperity

There is a specter haunting capitalist development around the globe.

In fact, the latest Human Development Report begins by naming that menacing apparition:

The wave of demonstrations sweeping across countries is a clear sign that, for all our progress, something in our globalized society is not working.

Different triggers are bringing people onto the streets: the cost of a train ticket, the price of petrol, political demands for independence.

A connecting thread, though, is deep and rising frustration with inequalities.

If anything, that’s an understatement. It’s not just “something” that is wrong; contemporary capitalism as a whole is not working, except for a tiny—but quite powerful—group at the top. The rest of us are being subjected to what can only be called inhuman forms of development.

people’s capabilities—their freedoms to make life choices—are fundamental. Capabilities are at the heart of human development. . .

Capabilities evolve with circumstances as well as with values and with people’s changing demands and aspirations. Today, having a set of basic capabilities—those associated with the absence of extreme deprivations—is not enough. Enhanced capabilities are becoming crucial for people to own the “narrative of their lives.”

For the past 20 years, capabilities have been defined in terms of what a person can be (“beings”) or do (“doings”). The objective of human development is then to expand the set of capabilities of each individual. 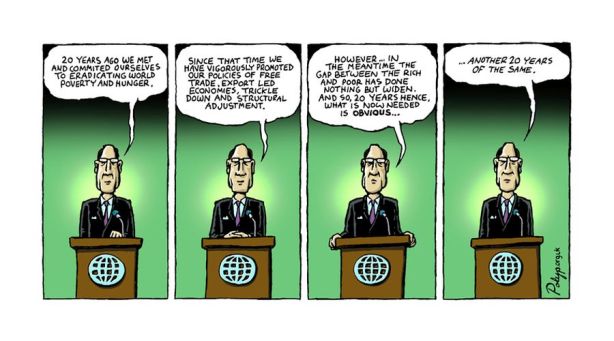 What is new in this report is the recognition that there’s nothing fixed about capabilities; the potential to be or do a variety of things evolves and expands as people imagine and demand new possibilities. And right now, those new capabilities—”enhanced capabilities,” in the language of the report—are being frustrated and denied, to all but a tiny minority, by the obscene and still-growing levels of inequality that characterize capitalism in the world today.

Moreover, it’s not just inequalities between nations (e.g., the fact that the difference in life expectancy at birth between low and very high human development countries is still 19 years) that should concern us. Even as inequalities for some basic capabilities are slowly narrowing across most countries (and a great deal, even on that score, remains to be done), disparities within countries continue to grow. Thus, for example, the poorest 20 percent in many middle-income countries can have the same average mortality rate as children from a typical low-income country. And the grotesque levels of inequality in both basic and expanded capabilities that exist now will, unless fundamental changes are made, create even more inequality in the future.*

That’s because, first, parents’ incomes and circumstances affect their children’s health, education, and incomes. As the authors of the report explain, the disparities in health and other potential capabilities across socioeconomic groups often start before birth and can accumulate up to and through adulthood. Moreover, social mobility tends to be lower in more unequal societies, thereby cementing the inequalities that currently exist and passing them on to the next generations. Finally, the interplay between inequality and the dynamics of power mean that

Income and wealth inequalities are often translated into political inequality, in part because inequalities depress political participation, giving more space to particular interest groups to shape decisions in their favour. Those privileged can capture the system, moulding it to fit their preferences, potentially leading to even more inequalities. Power asymmetries can even lead to breakdowns in institutional functions, weakening the effectiveness of policies. When institutions are captured by the wealthy, citizens are less willing to be part of social contracts (the sets of rules and expectations of behaviour that people voluntarily conform to that underpin stable societies). When that translates into lower compliance with paying taxes, it diminishes the state’s ability to provide quality public services. That can in turn lead to greater inequalities in health and education. When the overall system is perceived as unfair, possibly due to systematic exclusions or clientelism (the exchange of political support for personal gain), people tend to withdraw from political processes, amplifying the influence of elites.

In other words, existing inequalities are even more consequential than might appear because they not only affect current outcomes, they also set the conditions that shape economic and social outcomes in the future.

The result, as the report makes clear, is that hundreds of millions of people are denied the freedom to exercise their capabilities. They may see them, as practiced by a few at the top. They may imagine and claim still others, as the promise of the realm of freedom expands with new technologies, values, and forms of social interaction.

But the only capabilities they’re allowed to acquire and exercise are those that serve to reproduce the economic system that generates economic and social inequalities in the first place. In recent decades, they’ve been permitted many of the basic capabilities—such as early childhood survival, primary education, and incomes sufficient to purchase some of the commodities they produce. And even then, only unevenly and inconsistently. Severe gaps between those at the top and everyone else remain. But fundamental inequalities exist and continue to grow in terms of enhanced capabilities, including access to decent healthcare at all levels, high-quality advanced education, and access to new technologies.

So, what’s the outlook looking forward? On one hand, the report makes clear, existing inequalities hinder the kinds of redistributions of resources from those at the top that would make the world more equal:

But the richest, though few in number, can be an obstacle to expanding services. And they can frustrate action in multiple ways, through lobbying, donating to political campaigns, influencing the press and using their economic power in other ways in response to decisions they dislike.

And the compound effect of existing and emerging inequalities, technological change, and the climate crisis will certainly make remedial actions down the road even more challenging.

On the other hand, surveys have revealed rising perceptions of inequality, rising preferences for greater equality, and rising global inequality in subjective perceptions of well-being. So, while people often misperceive—by underestimating—actual income and wealth inequality, the proportion of people desiring more equality has risen over the past decade. Across the world: in the United States, Western Europe, Latin America, and elsewhere. And the combination of achieving more widespread basic capabilities and the desire for more equal enhanced capabilities means that people have more freedom to criticize and imagine alternatives to the existing, inhuman forms of global capitalist development.

The solution, of course, is political. As Ben Phillips explains, in his boxed statement in the report, recognizing the problem of inequality and even a formal commitment to tackle it are not enough.

The one generalizable lesson of social change seems to be that no one saves others; people liberate themselves by standing together. Change can be slow, and it is always complicated and sometimes fails—but it is the only way it works. Change is not given; it is won. By overcoming deference, building collective power and building a new story, inequality can beat inequality.

That possibility of mass movements from below—with workers banding together to exercise and expand their collective capabilities—is, of course, the spectral threat to global capitalism today.

*One of the worst examples of capabilities inequality in the world today is the United States. One study, from the Institute for Child, Youth and Family Policy at Brandeis University [ht: ja], which is too recent to have been included in the Human Development Report, reveals a sharp ethnic and racial divide in access to children’s opportunities in almost every major metropolitan area of the country. 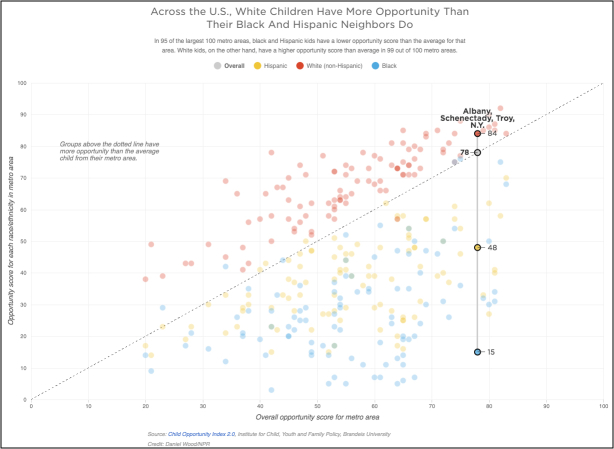 I am now Professor of Economics “at large” as well as a member of the Higgins Labor Studies Program and Faculty Fellow of the Joan B. Kroc Institute for International Peace Studies. I was the editor of the journal Rethinking Marxism from 1997 to 2009. My Notre Dame page contains more information. Here is the link to my Twitter page.
My articlesMy siteMy booksAbout me
Follow on:Twitter
Previous The problem with ‘Divisia’ money
Next Twinkle, twinkle through 365 nights – on one battery!